Valve Corporation unexpectedly announced its own VR headset called Index. It is assumed that the official announcement or even the release of the headset may take place in May this year.

The company has long been interested in virtual reality devices, and they support, for example, HTC Vive and Oculus Rift. But even with these facts in mind, few could have imagined that Valve would declare an attempt to try their hands in this market segment.

The visual inspection gives some information about the new gadget. First, two cameras located in front - they may indicate the recognition technology of objects and movements of the user. So, no external stations will be required. The device also has a slider adjustment, presumably - to adjust the interpupillary distance (IPD), which will fit the headset for the peculiarities of different people. Other specifications aren't reported.

However, you shouldn’t forget about the existence of the SteamVR Knuckles controller and several projects of internal studios for VR, which Gabe Newell spoke on Reddit in 2017: 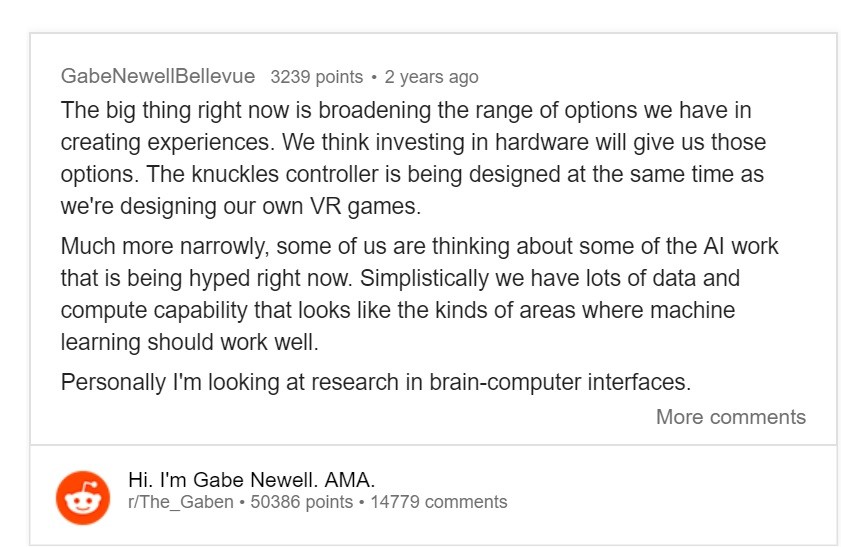 Last year, there were several unconfirmed rumours about this headset, which reported a high-quality display with support for 2880 x 1600 resolution and a viewing angle of 135 degrees (HTC Vive and Oculus Rift have only 110).

In general, confirmation of the existence of the headset is already there, and it remains to wait for details and prices. It’s worth noting that Oculus plans to release the Rift S and its autonomous Quest headset in the spring, and HTC is preparing the Focus Plus and Vive Cosmos. New details about the device should be expected very soon because the release isn’t so far.