We regularly publish statistics collected by The Esports Observer portal. The topic of today's release is May.

All this in today's digest

Well, if you expected revelations and surprises, there are almost none. As a result of the month, not a rare singleplayer game remained in the top 10: only multiplayer and the absolutely unkillable Just Chatting category. That's that, people love to talk. It is a pity that there is no Artifact category, which online tried to raise a couple of weeks ago.

League of Legends has had the third most influenceable month on Twitch in a year. An excellent indicator, despite the fact that esports events lasted only 3 weeks: starting May 21, the interest of the audience was heated by streamers. 85,6 million hours of viewing. 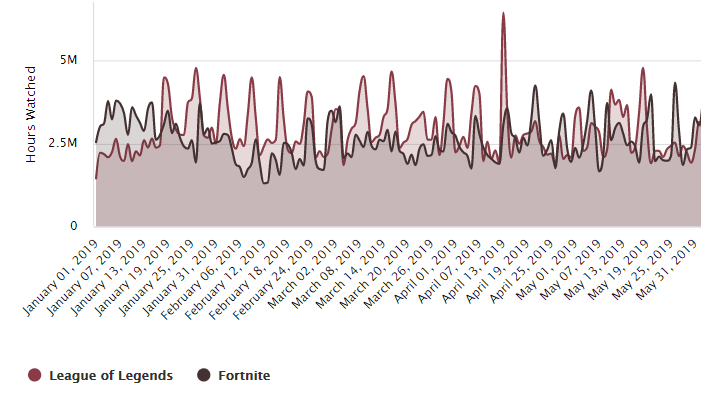 In general, the difference between 2018 and 2019 can be described with two pictures with statistics. The total viewing time increased but evenly distributed between LoL, Fortnite, GTA 5 and IRL category (Just Chatting). Interest in the League of Legends increased by a quarter, chatting did by half and GTA 5 by a fabulous seven times. Roleplay servers and Jared "Summit1g" Lazar — thank you very much, he has given the game 344 hours (of which 122 in May) over the last couple of months.

Dota 2 was in fifth place in May, and over the past week, it gained 10 million hours of viewing the ESL One Birmingham tournament. By the way, another 10 million provided Disneyland Paris Major in early May. Total for May - more than 42 million hours. dota2ruhub did the maximum contribution to the coverage of the tournament: 10,8 million hours per month. This level of attention brought the first place in popularity among all channels on Twitch. Even Ninja, Tfue and RiotGames are left behind. How it was compared to other studios that covered ESL One Birmingham and Disneyland Paris Major. The Esports Observer's information may be slightly incorrect. For example, other analytics services considered that Tfue should occupy the first place in the channels' rating.

An error of more than 10% is a strange thing for an analytical portal.

In short: top-4 games and World of Warcraft.

Four leaders sealed their top-positions since the beginning of spring and do not want to give way: Fortnite, League of Legends, GTA 5 and Just Chatting are unconditionally interesting to people and will not give up positions in the next six months at least. The situation can change only with GTA 5: its popularity rests entirely on the interest of several big streamers. If they get bored or appear more pleasant by a better option, the popularity of the game will fall again. This has already happened to VR Chat game.

Once WoW Classic started its testing in the middle of the month, game views jumped several times: from May 16, the content was watched from one and a half to three million hours a day. In the first half of the month, the average indicator of attention was kept at the level of 300-500 thousand hours a day.

Special thanks for this can be expressed to Sodapoppin and Asmongold streamers, who both scored 12 million hours out of 34,6 total.