Total War: Three Kingdoms has just come out – the release happened yesterday, on May 23 – and the game is already a huge hit in sales. Not only the latest title is highly popular among the Steam gamers, but it has also set the new record for Creative Assembly.

If you take a closer look at the current online of the game in Steam, you’ll find the title among the top-5 most played projects. There’re only Dota 2, PUBG, and CS:GO ahead of it, which means that Total War: Three Kingdoms is indisputably attractive for the Steam audience. The game has already peaked at the mark of more than 170,000 players online, and for the time of writing, the current online stands at 168,138. If that’s not a success for the developers – we don’t know what else could be. These are actually the highest player counts in the whole history of the Total War series. The previous records were held by Rome 2 with 118,240 players and Warhammer with 111,909 players. 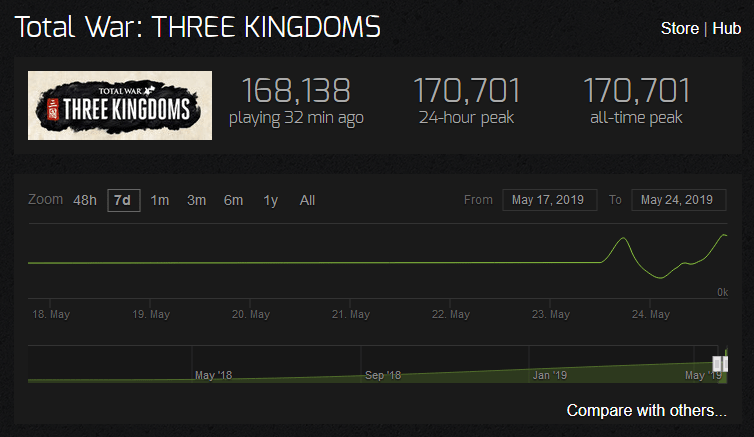 The presence of Steam in China helps a lot. Valve has been expanding its service there for the past few years, and the ongoing development of the digital platform laid the foundation for the success of many Steam blockbusters, including PUBG. Chinese players must’ve also appreciated the authentic depiction of the Three Kingdoms era, as the historical accuracy has always been the strong side of the projects developed by Creative Assembly.

Besides, we’ve rated the game high enough in our review – it’s worth reading, we promise.