The waters of the Yellow River flow slowly. The river is horribly old and remembers the times of the nightmare that once have covered China. The great Han dynasty, which existed the longest of all the other Chinese empires, was slowly rotting inside. The worm of corruption and the shackles of exorbitant taxes choked the people, turning them into dumb slaves. The imperial court was mired in intrigues and a quarrelsome struggle for an extra bit of power. The uprising of Yellow Turbans drowned the Celestial Kingdom in the blood of its peasants, and the aristocrats, who had won the war, seized power. Thus began the story of the three Kingdoms: Wei, Shu and Wu. This is how our review on the most interesting part of the Total War series — "Three Kingdoms" — begins.

Total War: Three Kingdoms turned out bright and slightly ambiguous. The developers had thoroughly studied historical chronicles and novels dedicated to that era, so the game really keeps the spirit of that time and key gameplay elements create a decent atmosphere, catching you with the process. Battle animations are the only so-so thing, but we will hurry slowly. 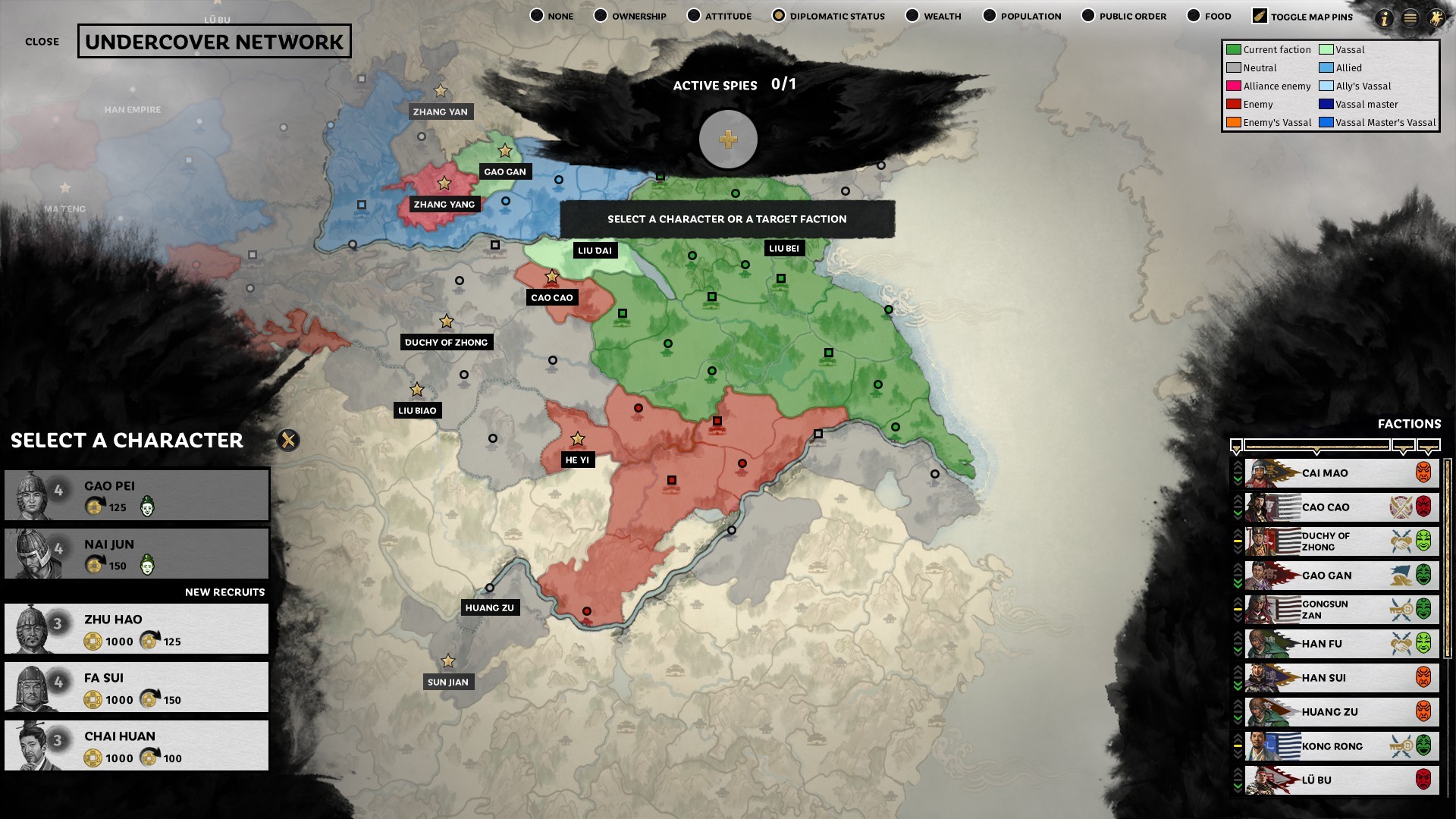 When the winds of change blow, some people build walls and others build windmills

The main story of the Three Kingdoms is tortuous and complex, wrapping around the numerous events of that time. The key goal is to establish the leader of his faction on the imperial throne, but the path to it is strewn with obstacles of economical and political nature. Fifteen playable parts and several dozens of smaller missions are trying to bite off a piece from a huge Total War: Three Kingdoms map, numbering more than two hundred towns, settlements and villages.

An important change — there are now two campaign modes. Novel follows historical insertions, decisions and events, turning warlords into semi-mythical heroes with supernatural powers. Chronicles add realism, but in this case, the campaign will differ less from the previous parts of the series.

The war cannot be won solely, and diplomacy supported by good governance comes to the foreground. The weak can be devoured or subjugated as vassals, with the strong enter into temporary alliances and form coalitions: this is a new element of the gameplay inherited from Chinese politics. The number of territories and successful conquests affect the figure on the political board. However, no matter how successful and strong your leader is, he cannot succeed in uniting the whole of China before the final split into three parts. Sooner or later, the country will be divided into Three Kingdoms and the campaign will become even more interesting and hardcore. The game's diplomatic tools grew, as did the intelligence of AI in negotiations. The weak are trying to reach for the strong, offering the voluntary suzerainty and in return asking only for maintaining autonomy and assistance in wars. 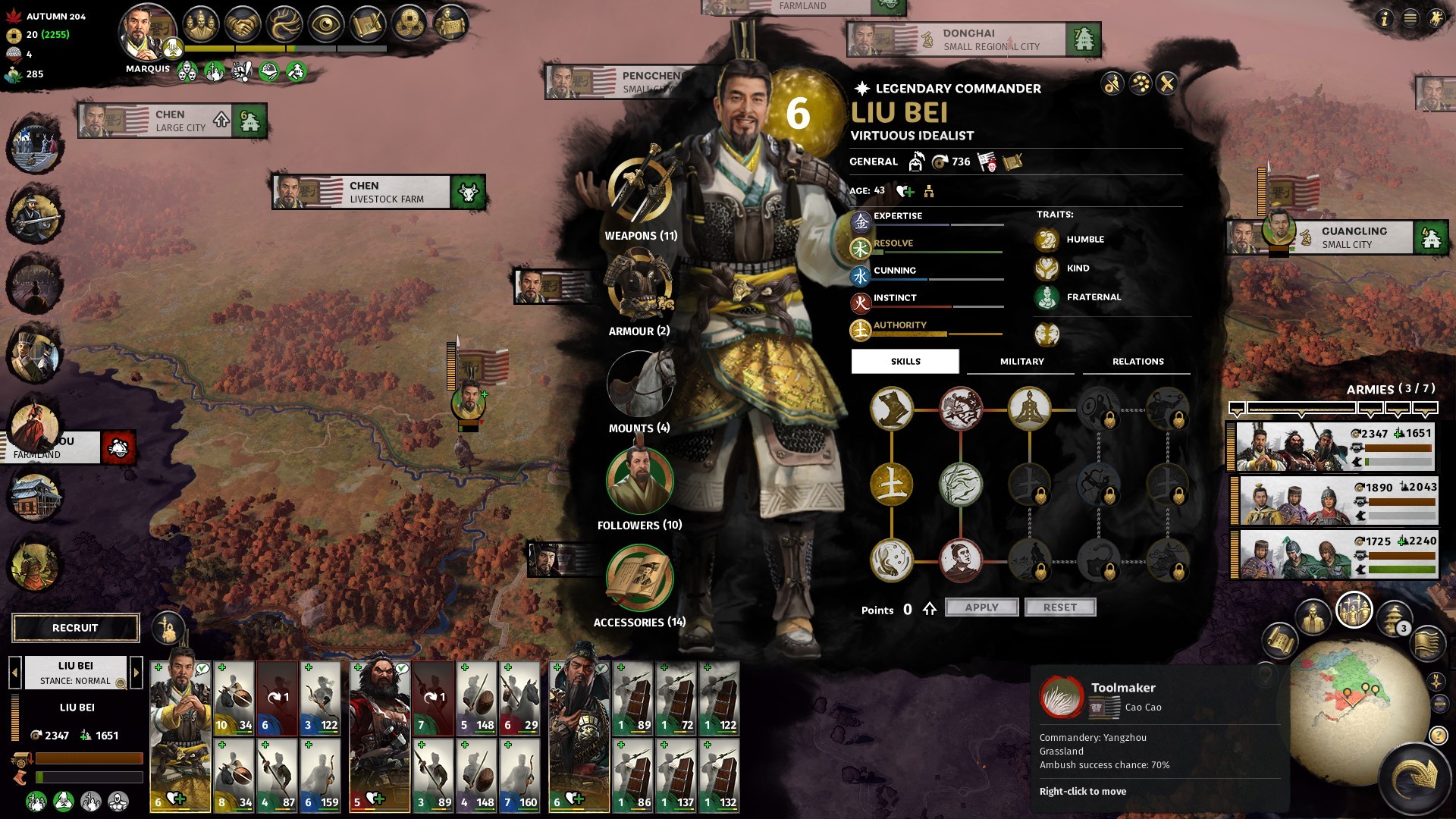 The characters of Three Kingdoms have finally evolved into full-fledged political and military allies. Customization has grown significantly, hero's characteristics have become essential for successful country and army management. Faction leaders are not so different from each other, as in the TW: Warhammer series, but everyone still has a couple of distinctive features that separate them. The cunning Cao Cao skillfully manipulates the pieces on the chessboard and is able to set down enemies without interfering in wars. The noble Liu Bei enjoys the love of his peasants and profits from this; he is able to annex the remnants of Han settlements without a single drop of blood thanks to his unique ability. The Jiangdong Tiger Sun Jiang is the embodiment of a real hero from Chinese legends who heads the army of disciplined soldiers.

Other characters live a full life of the courtiers: quarrel with each other, ask for promotions, switch factions and help to govern the country. The player should find the right post or place for them. A talented warlord is to be sent to command the avant-garde; a skilled strategist should be at the head of the army; a visionary executive is made to manage the city. The main thing is to monitor their growth, choose the right upgrades and provide advisors suitable for the position.

Spies now have to be recruited from the yard, they are again full members of the retinue, which is sent to the camp of the enemy (or an ally) and gradually increases its weight there. Once an agent is successfully implemented, you can set a variety of tasks: from sabotaging armies and settlements to killing a successful commander or a dangerous official. 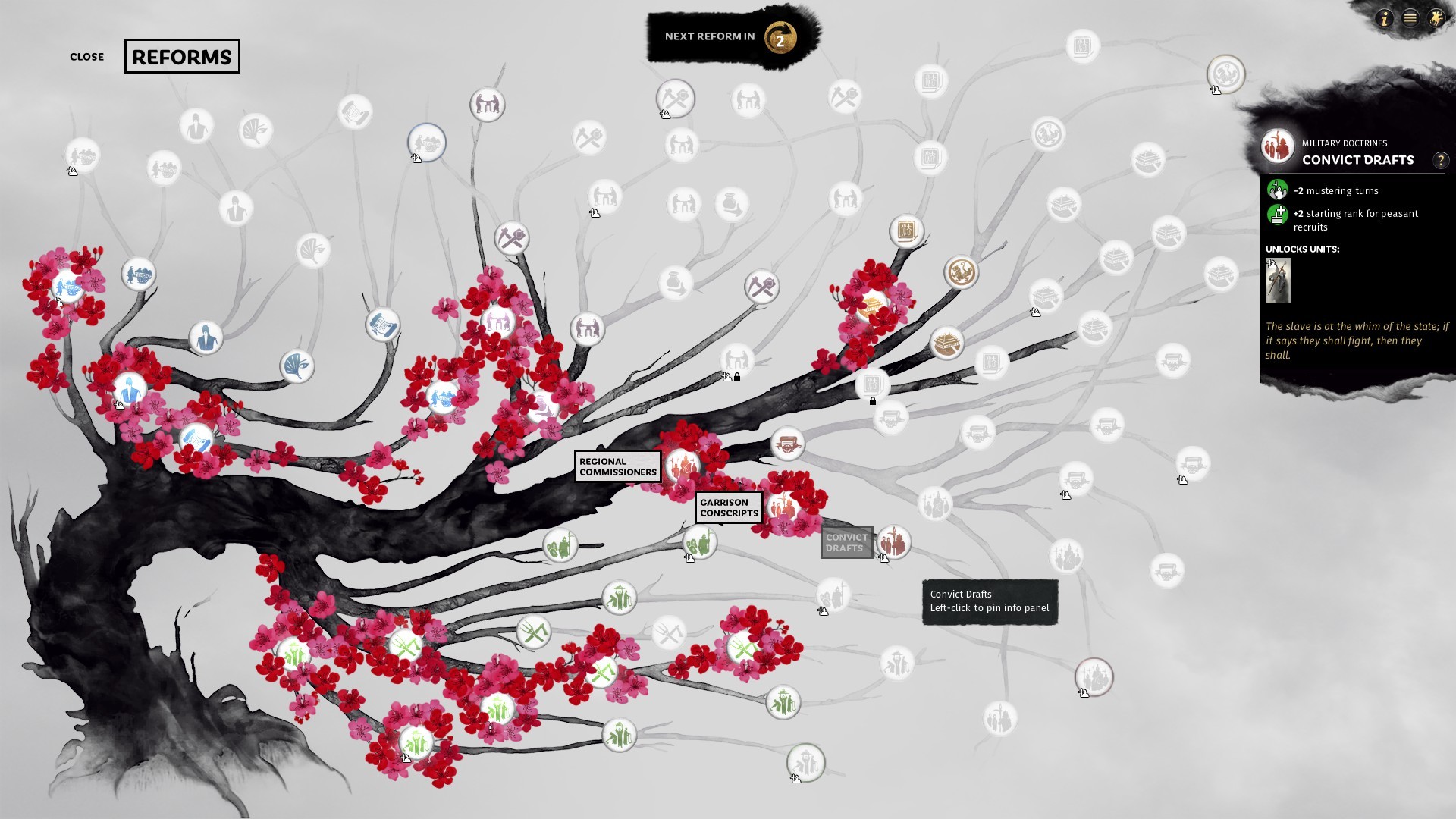 Total War: Three Kingdoms development tree has also changed following the setting. Technologies are gone, giving way to reforms that take place every five years. The player can only choose the momentarily-necessary improvements and wait for spring when the peasants, satisfied with the winter, will gather to listen to the herald of their ruler.

Reforms bonuses are very different: from military and trading ones to diplomatic or construction. A sensitive mechanism allows you to plan your actions on the map and will timely reinforce the player's policies with the right tools. Have you noticed that there are no complaints? It's okay, we'll get there soon. But the game is actually very good. 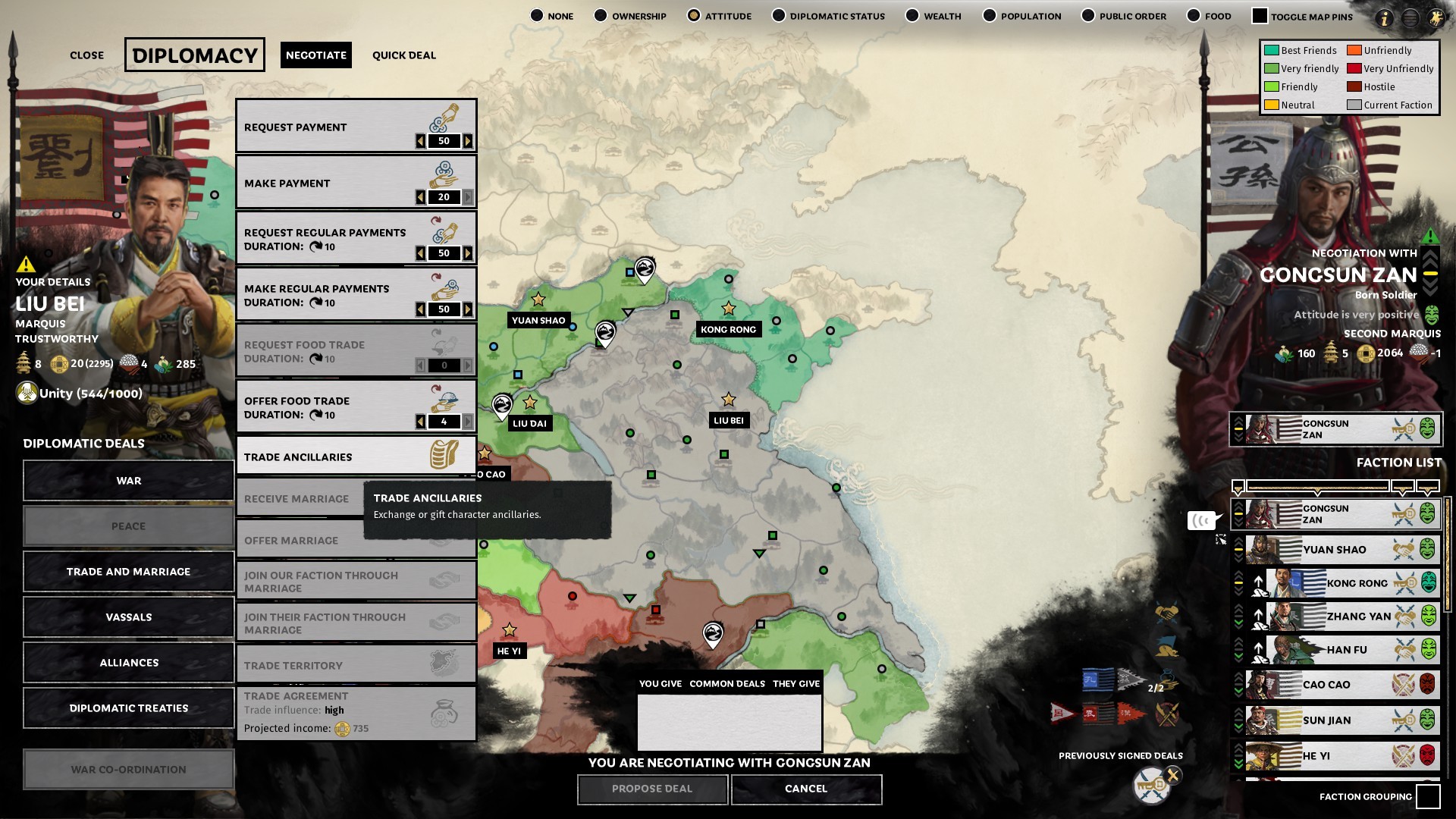 Sun Tzu, The Art of War

The great tactician always pays attention to supplying armies and looking after their morale. In the Three Kingdoms, each army includes up to three generals and eighteen escorts. A set of units depends on the general and even the type to which one belongs. Fighters love cavalry and swordsmen, landowners try to surround themselves with reliable protection from spearmen, strategists prefer good archers and are able to hire detachments of siege weapons. And the main commander — you — is obliged to find the best combination of both the troops themselves and the trio of commanders. And competently allocate resources, including both the maintenance of the army and its supplement. Blitzkrieg tactics do not work in Three Kingdoms. The Chinese generals were meticulous in their conquests, preparing campaigns a long time before attacks. It's nice that the historical approach and realism are reflected in the game, even if not completely. 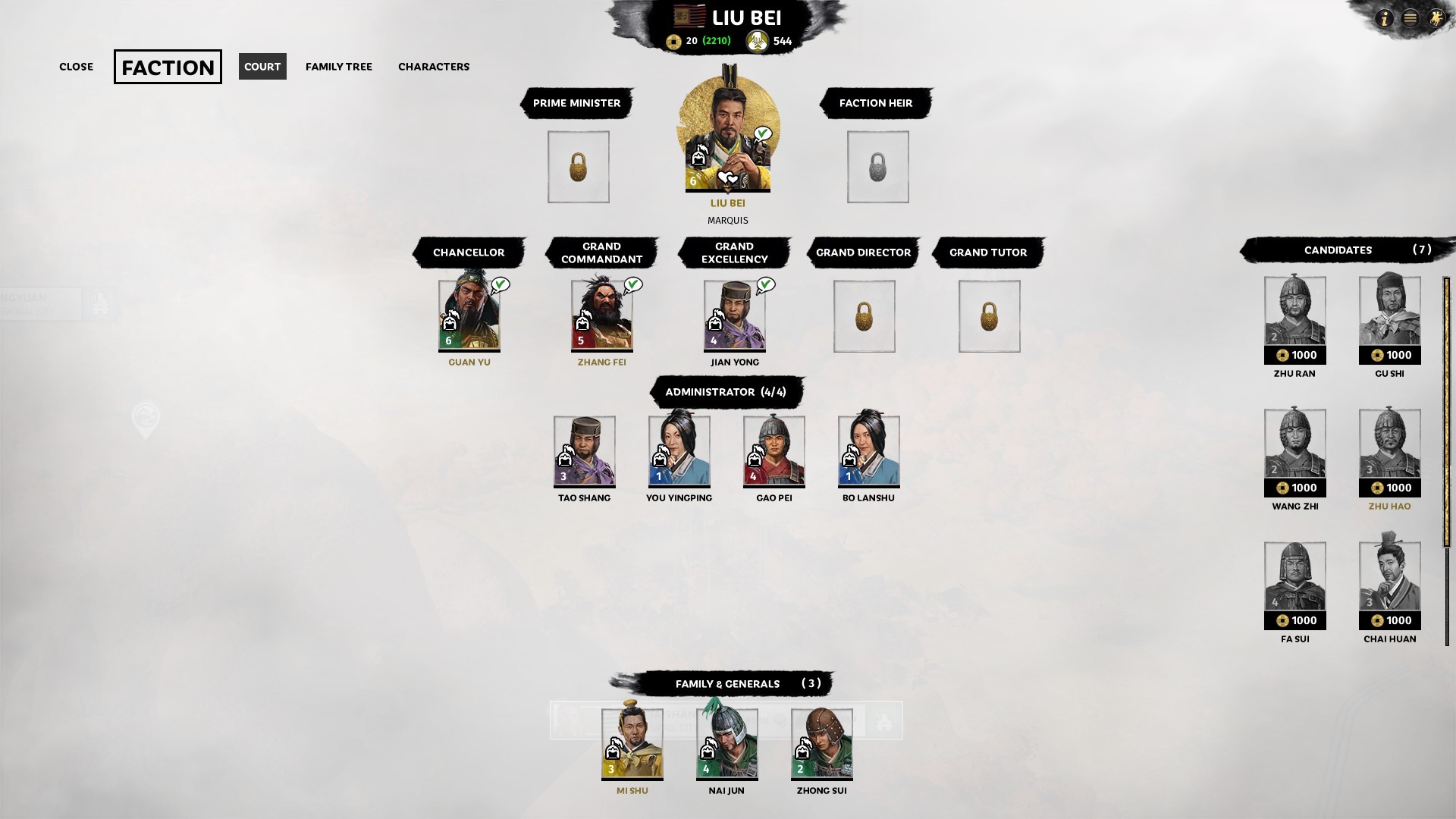 We can only scold the game for its battles and battle animations. Yes, the fights have changed, ambushes found a completely different meaning, they are almost key now. The tactic of unexpected attacks was appreciated both by Sun Tzu and the followers of his teachings. Moreover, being ambushed in Three Kingdoms does not mean that the army is lost. There is a new feature: if you bring your troops to a key point on the map, they can simply escape from the battlefield, regroup and return for revenge. The Novel mode there are also duels of warlords. They are quite spectacular and no less effective. When you kill an enemy general, his army will panic. Push the quivering flank in time and they will easily give up. 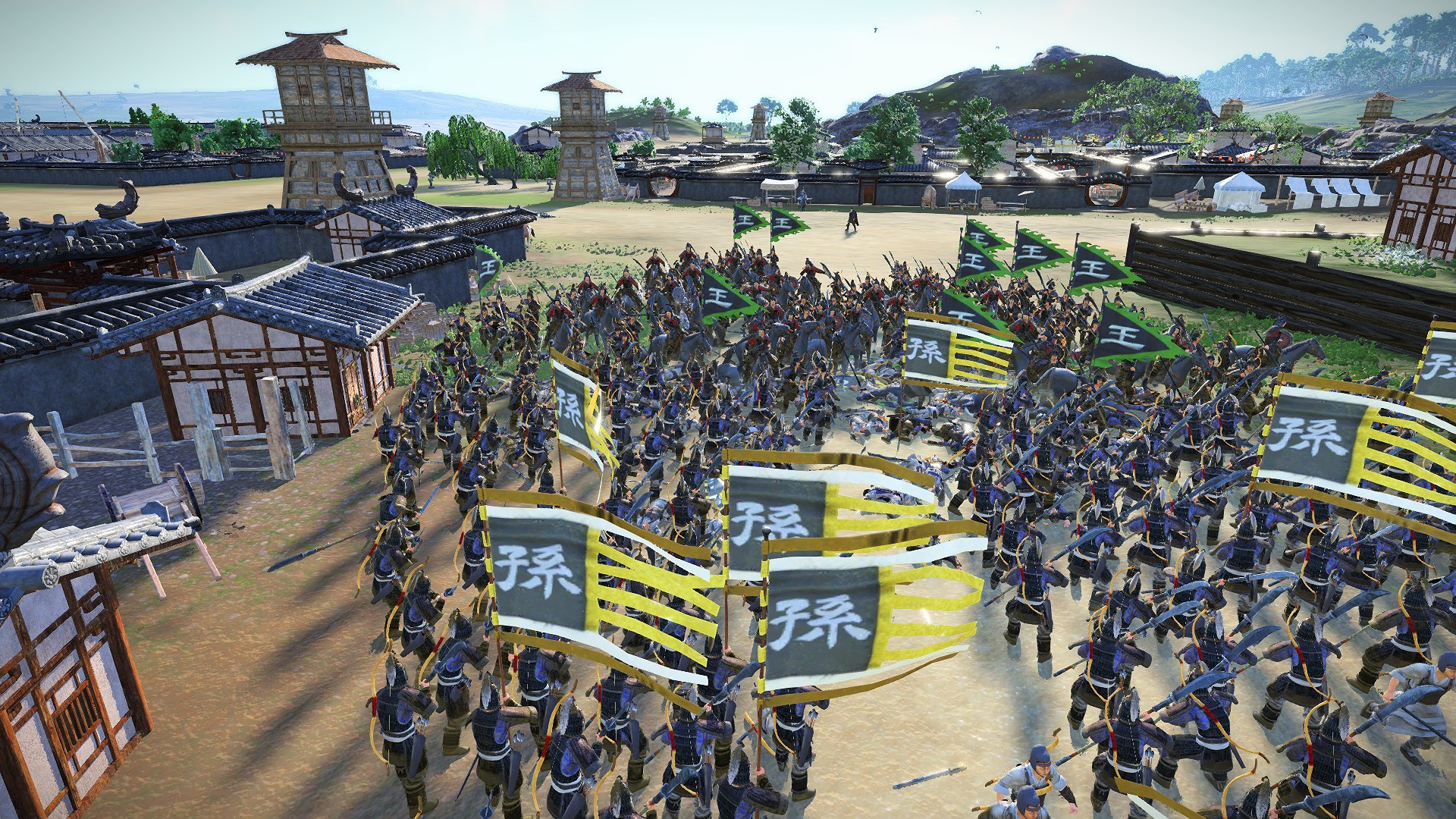 Any animations out there?

Shogun 2 was an exemplary game in terms of battle animations. In both parts of Total War: Warhammer the quality downgraded sharply as separate soldiers and units appeared, like giant lizards or other big guys. The developers failed to bring the matter to the end and the situation in the sequel was not fundamentally corrected.

Watching armies fighting in Three Kingdoms is not too pleasant. Cropped movements, strikes into the air, a small set of combat techniques. It reminds afterschool fights with children trying to punch each other. Almost the same thing happens in duels, unfortunately: opponents perform three to four acrobatic tricks and enter the second round.

Troops behave themselves strange in battles. Thin ranks of spearmen instantly turn into a hectic crowd during clashes, where you can not figure out who is your own and who is the enemy. Well, maybe we've seen too much Chinese action movies, where armies moved like a whole unit but the real battles of that time chaos took precedence over order more often than was mentioned in the chronicles. Who knows...

The game sounds great, that's it. On the political map, your ears are enveloped in the melodious music of China's stringed instruments. The cities respond with the noise of the peasants, the picturesque landscape is occasionally marked by birds and crickets singing. When the weather changes, we are covered with pleasant sounds of rain, sometimes with oppressive howls of winter winds. In battle, everything is much more active and more cheerful: battle drums, shouts, the sound of weapons, the neighing of horses. Beautiful, just beautiful.

If Creative Assembly did just a little more with the animations and made the optimization better to allow powerful PC owners to fight with armies of thousands of soldiers, Three Kingdoms could have become a well deserved best game of the series. So far, this game is one of the best. Much better than the "British confusion," but still slightly inferior in the overall picture of Shogun 2.