We won't bother you with the long intro and start to tell you about this bright match right now:

First blood on Centaur 25 seconds before the start made an excellent beginning for Team Liquid. PSG.LGD was well-prepared for the victory: they showed it from the start with aggressive playstyle. The game went equal in terms of the score and slight LGD's advantage in gold until 28th minute. Casual fight on Roshan was in PSG.LGD's favour this time. Miracle- got Aegis, but lost the fight due to a couple of the rude mistakes: fy got his Chronosphere and helped the team to win. The Chinese team continued to dominate on the map with 10k advantage in gold.

"Liquids" started to "walk" here and there on the map and were punished by the opponent. Even Mirana's ultimate and smoke didn't help them to win the critical fights in rival's forest and at their base. Ame, fy and Chalice were the gods in this game. PSG.LGD destroyed top Tier-3 and Shrines, tried to enter the base and were forced to retreat, losing Gyrocopter with Centaur and Rubick.

Third Roshan with Refresher on 49th minute allowed PSG.LGD to push until the rival's base and win the map. 1:0 for the Chinese team! 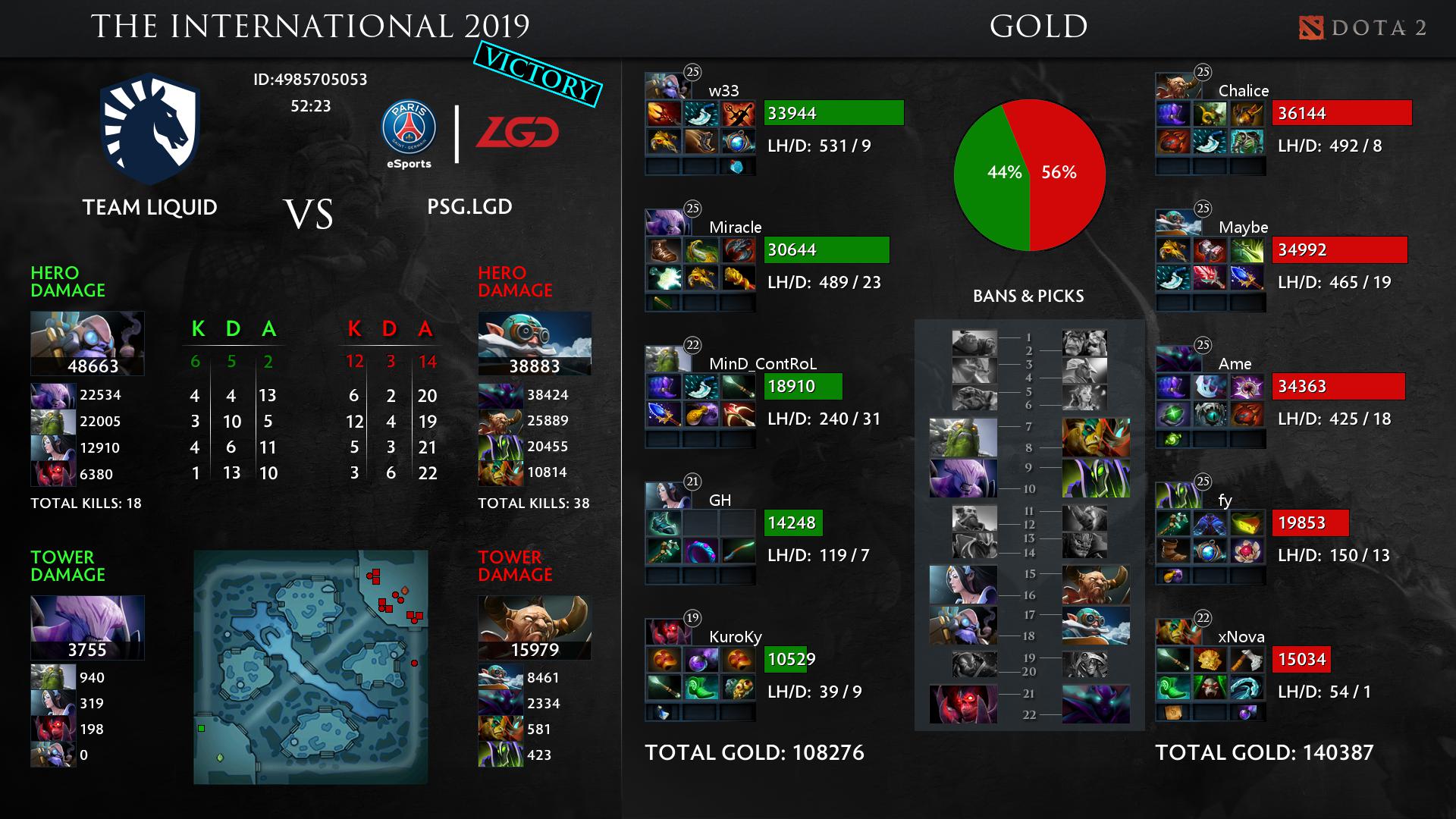 And again, the game started with first blood on LGD's character (Lion this time). Liquid lost draft stage and couldn't oppose the rival at the beginning of the game, again. PSG.LGD led the map.

One victory in the fight after Roshan due to fy's mistake helped Liquid to even the odds and got the necessary time to farm the essential items.

The critical fight happened at 39th minute when Liquid managed to restrain the opponent only by several buybacks. The counterattack succeeded, and PSG.LGD lost "cores". Team Liquid could reach next Roshan and get an additional effect from Aghanim's Scepter for Rubick at the 46th minute. It was a semi-final, and we saw a long battle: 53rd minute with 16k advantage in gold for Liquid.

The final battle started at 58th minute near Roshpit. The teams exchanged spectacular abilities, but Liquid was more persistent and could defeat the enemy, making a full-fledged comeback. While Lifestealer tried to bite Liquid's Ancient, PSD.LGD defended theirs, but unsuccessfully. 1:1 - the match continues! 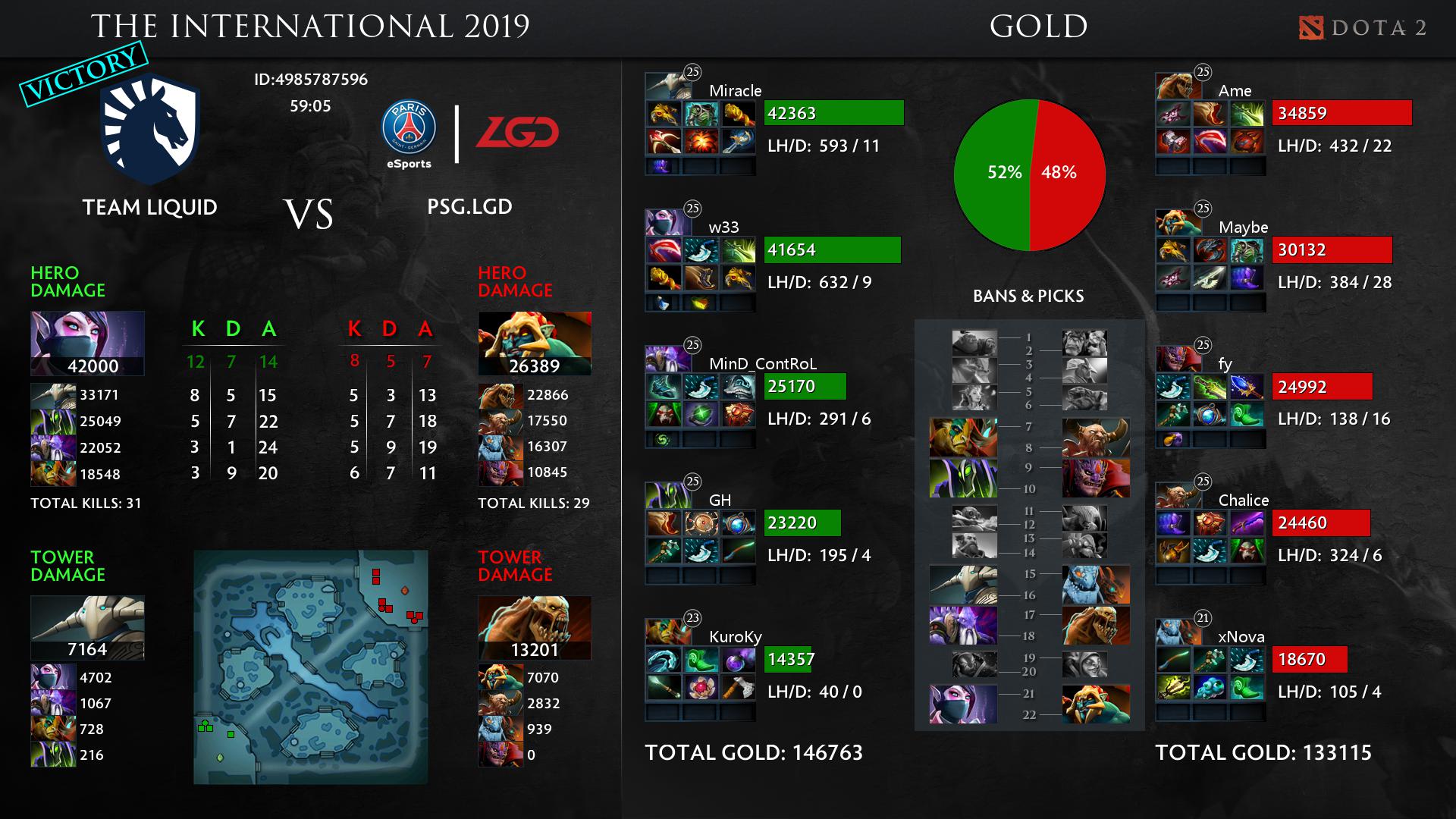 Traditionally, this match started with first blood for Team Liquid on Elder Titan. At first, Shadow Fiend felt "ok" against Templar Assassin on the mid, so the last had to farm in the forest. And again we have a fair game at the beginning until 10th minute.

LGD lost their pace, facing Liquid's pressure on the mid, and the fight, too. Liquid's performance near Roshpit helped to kill the opponent and push to the LGD's base. LGD had no external fortifications, and Liquid got 14k advantage in gold to the 23rd minute.

LGD made a little comeback, killing rival's cores on the bottom lane on 28th minute. But this wasn't enough to turn the game to their favour with 22:8 score and 20k gold — the Chinese team lost Tier-3 and barrack. Push and retreat - this's Liquid's successful tactic that no one could resist.

LGD did their best to protect the Ancient, but Liquid's desire to win was stronger. Great game from Team Liquid! Welcome to the Grand Finals! 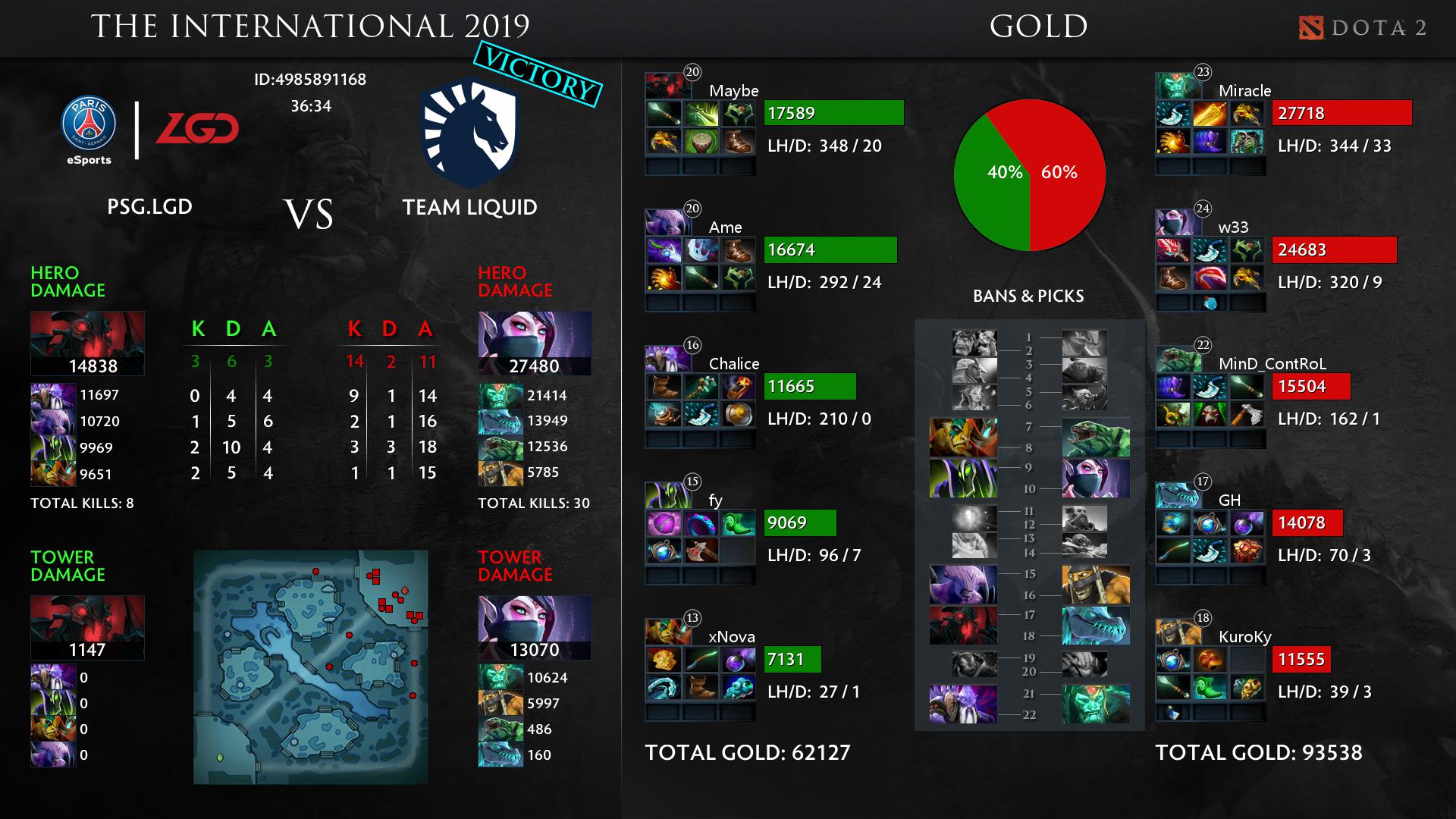