The first day of The International 2019 in Shanghai has officially begun! And the opening game was a clash between 'the Hosts' and 'the Bears'.

PSG.LGD opened the draft with Tidehunter and Rubick, VP picked Silencer and Earthshaker. Then the Chinese team chose Gyrocopter, Ogre Magi and Sven, and Virtus.pro cliqued Morphling, Brewmaster and Dazzle.

The Chinese team shed the first blood with arena chanting their name: Solo was the first player to die in the TI9 playoffs. Ame's Sven got a great start and, thanks to a carefully performed stacking, led the table of character values. VP were able to open midgame with an excellent fight on the opponent's midlane, destroy the T1-tower and take Roshan. PSG.LGD responded with two successful encounters: the impudent Tidehunter got Blink Dagger and did not miss a single opportunity to jump into the opponents, Sven got BKB and was immune to Vp's extensive control. At the half-hour mark, the Chinese team was leading with a ten-thousandth advantage. As a result, Virtus.pro had to immediately make three buybacks - including Morphling - in order to compete for the second Roshan. Nevertheless, PSG.LGD waited for Tidehunter to have Ravage and resisted: Maybe got Aegis with his Gyrocopter. By the 40th minute, the advantage of the Chinese team has grown to 20 thousand. After another successful fight, PSG.LGD broke the enemy T3 mid tower. Then, they've killed the third Roshan. The frantic buzz of the arena accompanied LGD.PSG's final siege: at 43rd minute, the Chinese entered the opponent's bottom line, sent the enemy cores to the tavern, forced them to spend buybacks, destroyed the tower and both barracks, moved to the upper lane, killed VP heroes once again and, finally made the opponents write 'gg'. 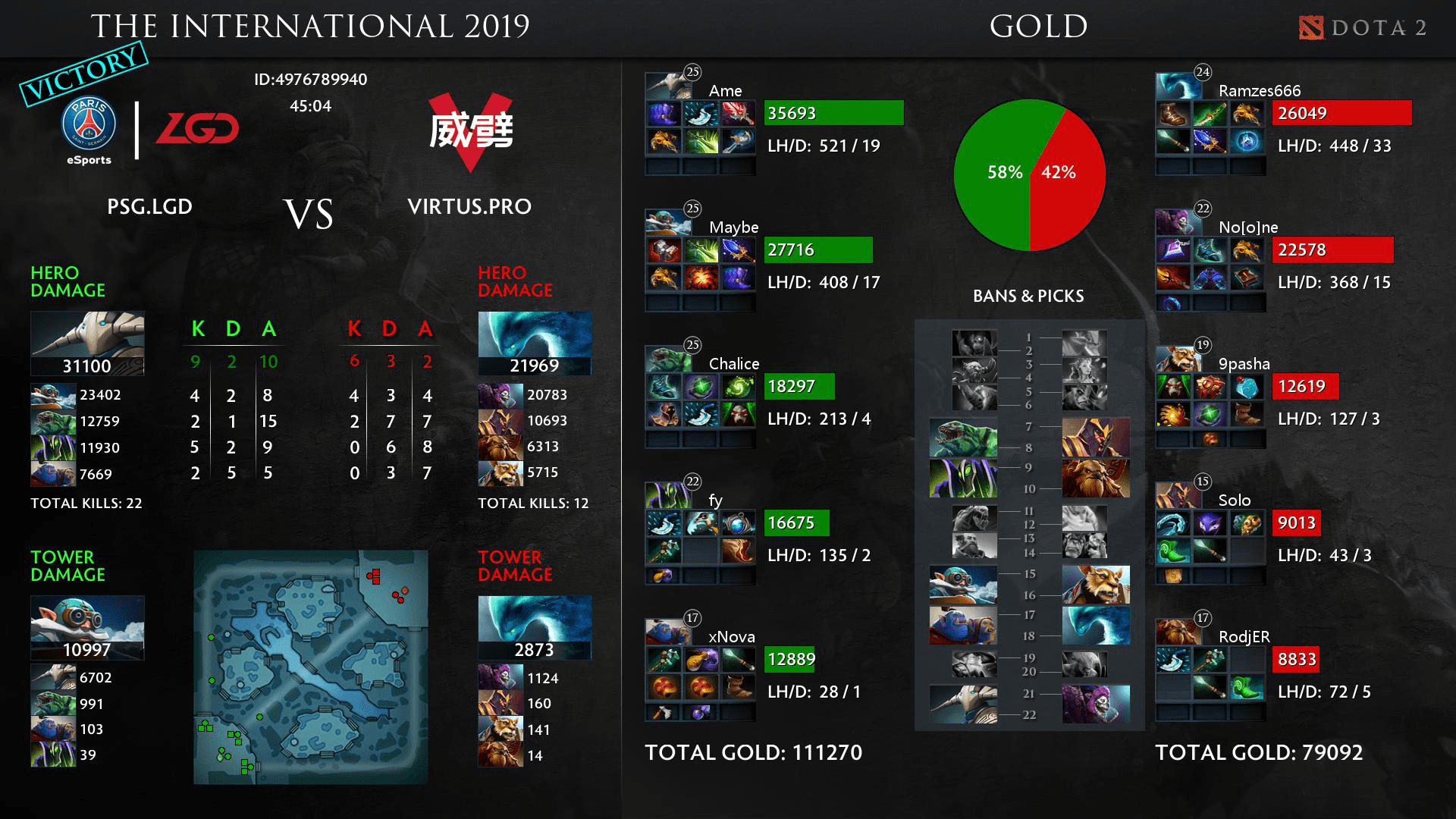 Solo with his Lion justified his veteran nickname from the first minutes of the match: he stunned everything everywhere, greatly simplified the team's laning stage. Closer to the midgame, PSG.LGD again imposed their play: the timely Blink Dagger at Tidehunter and BKB at Kunnka helped the Chinese team win a couple of key fights and go ahead in gold. VP lost the pace, the arms race, the fight for Roshan and were caught at the base.

At the 35th minute, PSG.LGD went for VP's bottom lane. RAMZES666 caught Mirana's Sacred Arrow in a very important moment and instantly went to the tavern without a buyback. The Chinese team immediately crushed the enemy base, leaving only one barrack on the top lane. It was not possible to pull back the retreat without losses and VP, who caught a good timing, were able to pick up the helpfully resurrected Roshan. While Virtus.pro lost the courier with Eaglesong, Ame purchased Divine Rapier for Phantom Assassin.

In the decisive fight of the map, PSG.LGD beat their opponent and ended this series with a dry score, 2:0! 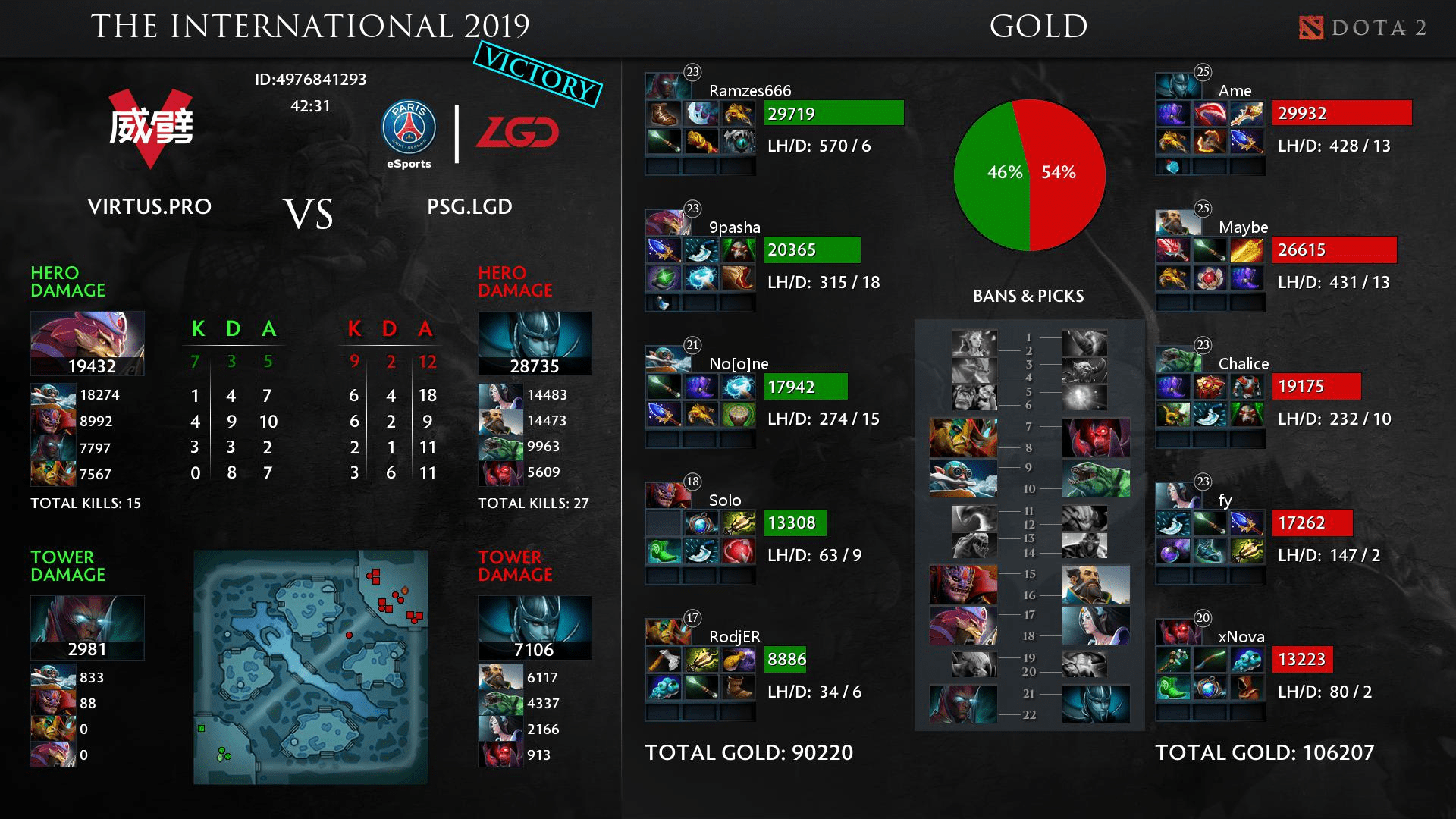