One day, a guy named Tyler Shultz asked Insomniac a weird request. He wanted his proposal to be embedded in the game

@EvanFilarca #spideysquad I need your help. This may be selfish, but I’m ready to propose to my girlfriend and want to do it in a big way. @insomniacgames @bryanintihar @BillRosemann is there anyway you can put an Easter egg of “Madison, will you marry me?” Anywhere in the game?

Surprisingly, Insomniac Games said, that they would be glad to do so and assist Tyler in his proposal. They made a “Maddie, will you marry me?” poster on the cinema’s entrance. This was so sweet and romantic. Insomniac sure did a great job and showed how much they care about the audience of their game. 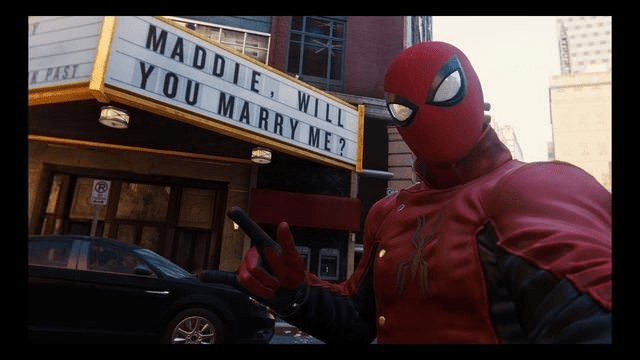 This could have been so perfect and remarkable for a freshly-released game, but unfortunately, the story of the proposal itself did not end well. As Schultz commented after:

“The thing that sucks about this Easter egg is the date I’m making this video now, three, four weeks ago, my girlfriend dumped me to go with my brother, basically throwing away the five years we had together. This might go down in history as the saddest Easter egg? I don’t know. Regardless, I’m actually kind of happy that it’s in this game. ... If anybody else wants to use that as their proposal, please do. ... I just want to see someone gets married, through that thing.”

Poor fella's girlfriend also said that this way of a proposal is not the way she wanted to be proposed. This story is even sadder, because Tyler wasn’t betrayed just by a girlfriend, but a brother as well.