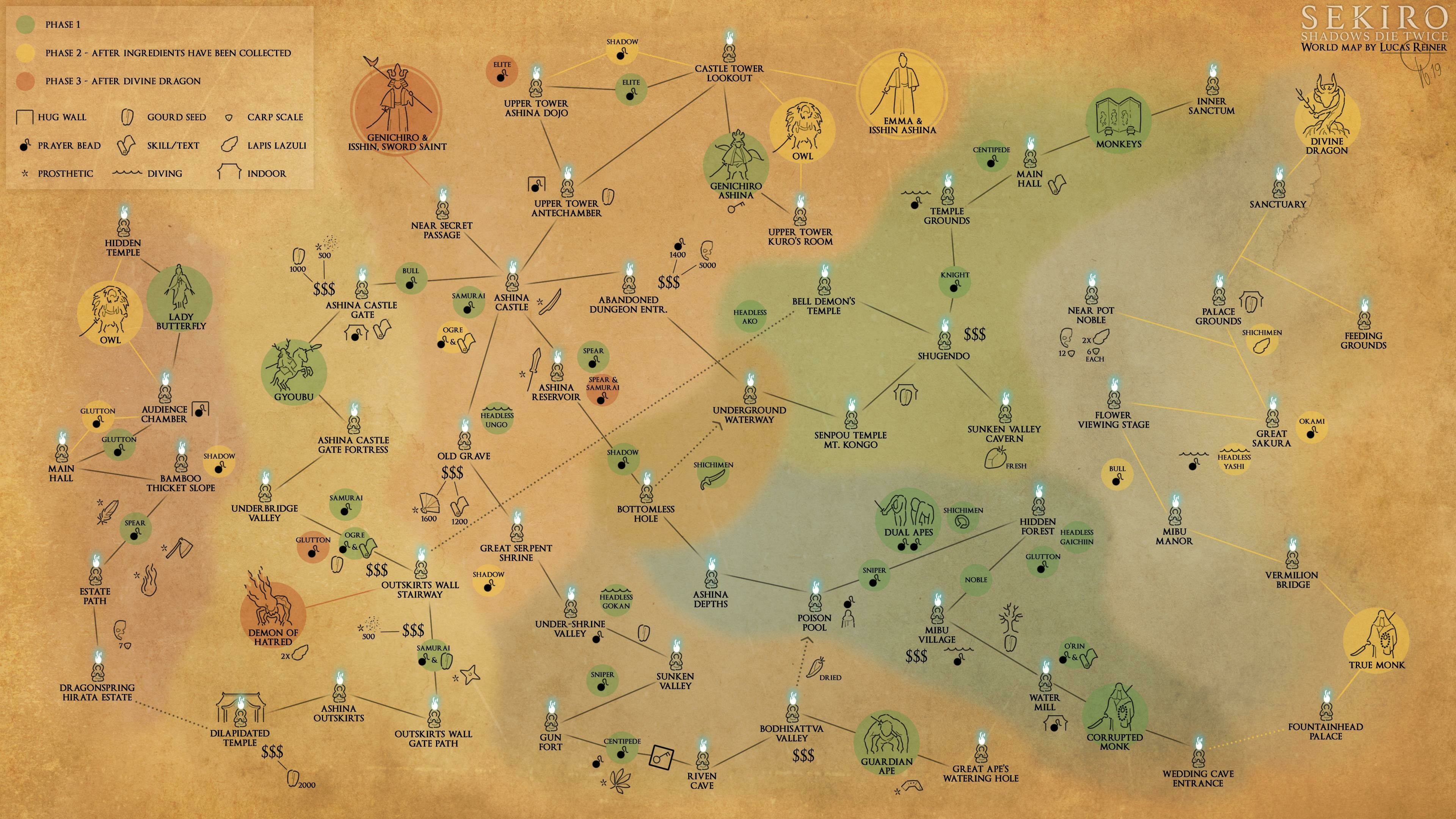 Your first serious advisory resides in a small secluded location. You don’t need to clean it from the mobs – the general is standing near the supply wagon all alone. This boss isn’t hard for experienced players, but if you’ve only started playing, this fight can be quite a nuisance. The trick is to deflect regular attacks and do strike him a couple of time when there is an opening. When Kawarada raises his hands and gets covered in haze, it means he is meditating to gain back some health. A couple of attacks should snap him out of it and resume fighting.

In all other scenarios act cautions and don’t be hurry.

Another Mini-Boss you face early in the game. It’s a colossal slob able to end the fight in a couple of strokes, but with exploitable weaknesses. Before approaching the Mini-Boss, acquire Shinobi Firecracker prosthetic attachment (more details here). Also, make sure you’ve cleaned the location from two guardians standing near-by.

You don’t have to ogle at the foe breaking its chains, better use the time to strike him a couple of times with your sword. Once the chains have been broken, lure the ogre to where the sentries stood before to avoid the spearman above.

Dodge or sidestep the Mini-Boss attacks. The red Japanese symbol indicates that he’s trying to grab you, in which case your tactics should remain the same. When the giant attempts to attack with his foot or elbow or, he exposes his back and sides to fast attacks. Try to set him on fire with the Firecracker.

There is a trick to finish the first stage of the fight quick — make the giant follow you, grapple hook on a roof, and return to the gate. When the enemy returns to his original location, you have a chance to do a Deathblow.

Whatever you do, don’t try to deflect the strikes and always dodge the grab attempts.

The bull is as big and powerful as it is dumb and clumsy. Do your best to avoid its flaming horns by standing at the side or behind. Attack the hind legs, it’s not as effective, but much safer than going straight for the head. If you learn to dodge the Blazing Bull’s swipes and counter-attacks, it should be a piece of cake.

Try to make Blazing Bull hit the wall. If it gets stuck, you get to hit him for a long time without any risk.

This Mini-Boss has only one stage, but the dense HP bar keeps him a hard opponent.

This experienced and skilful warrior can be found in the Ashina Castle, where you find yourself after the battle with the wolf. Think of him as of Naomori 2.0 — more HP, stronger attacks etc. Start this task by killing them for members of his guard, then proceed on the roof and use stealth to initiate the battle.

The foe uses dangerous stomp-attacks and powerful rapid thrusts (Mikiri Counter is very useful). Use short attack sequences; don’t overextend exposing yourself to counter-attacks. Matsumoto charge can be an excellent opportunity to inflict a couple of “free” strikes.

The battle with Shigenori Yamauchi will put your Sekiro battle techniques to a tough test. The key to victory against this mini-boss is parrying his attacks and well-timed counter-attacks. Keep an eye on the Posture as you don’t want it to get out of hand. Attack with every opening, deflect and block Shigenori’s strikes.

You will learn a lot about Sekiro: Shadows Die Twice combat system by beating this Mini-Boss.

This guy roams around his location, so you are advised to take a comfortable spot for a stealth attack to make it to the second stage right away. This Samurai fights similarly to the other similar bosses — swings his sword and uses dangerous undeflectable thrusts.

Learn his attack patterns and attack at the end of the attack sequences. The lower Tenzen’s hp bar is, the easier it is to cut his posture. When he has less than 50%, the Mini-Boss gets pissed off and starts attacking more often, making you play safer.

Before facing the Drunkard, it is advisable to kill the surrounding mobs by luring them one at a time, move. Then find the NPC Samurai and ask him for assistance. If you do everything right, this boss will be a walk in the park — wait for the NPC to aggro Juzou, do a couple of strokes, rinse and repeat. EZ.

The secret Mini-Boss, which you can find from the Chained Ogre battle location. Get to the roof, enter through the hole to the right and keep moving in the same direction. Grapple hook on the tree, jump, latch on to the ledge and crawl to the left. You need to pass the cave with Headless — one of the nasties opponents in Sekiro: Shadows Die Twice.

Headless can teleport, has immense burst damage and can scare or slow you. The two combat stages don’t make the task of killing him any easier.

First of all, don’t try to fight Headless early during a walkthrough until you’ve acquitted Mibu Breathing Technique Latent Skill and Divine Confetti.

Dodge the wide attacks of the giant and try to do as much damage as possible while the bonuses are active. Jump, strike and dodge until you’ve defeated the giant.

Start by getting rid of the mobs which lurk around the location (you know the drill), preferably with the rich vegetation. Then sneak up on the Hunter from behind and kill him the first time using stealth. The Misen mercenary gives you a great opportunity to practice Mikiri Counter. Most of his aggressive actions boil down to thrusts, making counter-attacks a great option.

This is the first part of the mini-boss guide.

Check out our boss guides below: