The choice of weaponry in Sekiro: Shadows Die Twice is quite limited, but the arsenal of combat capabilities of Shinobi goes beyond the usual sword or axe waving. Wolf handles various tools in his prosthesis masterfully and gradually learns all sorts of skills that help him become a dangerous opponent for any boss. Our guide focus on the extensive Wolf skill category: prosthetics, martial arts, and hidden ninja skills. 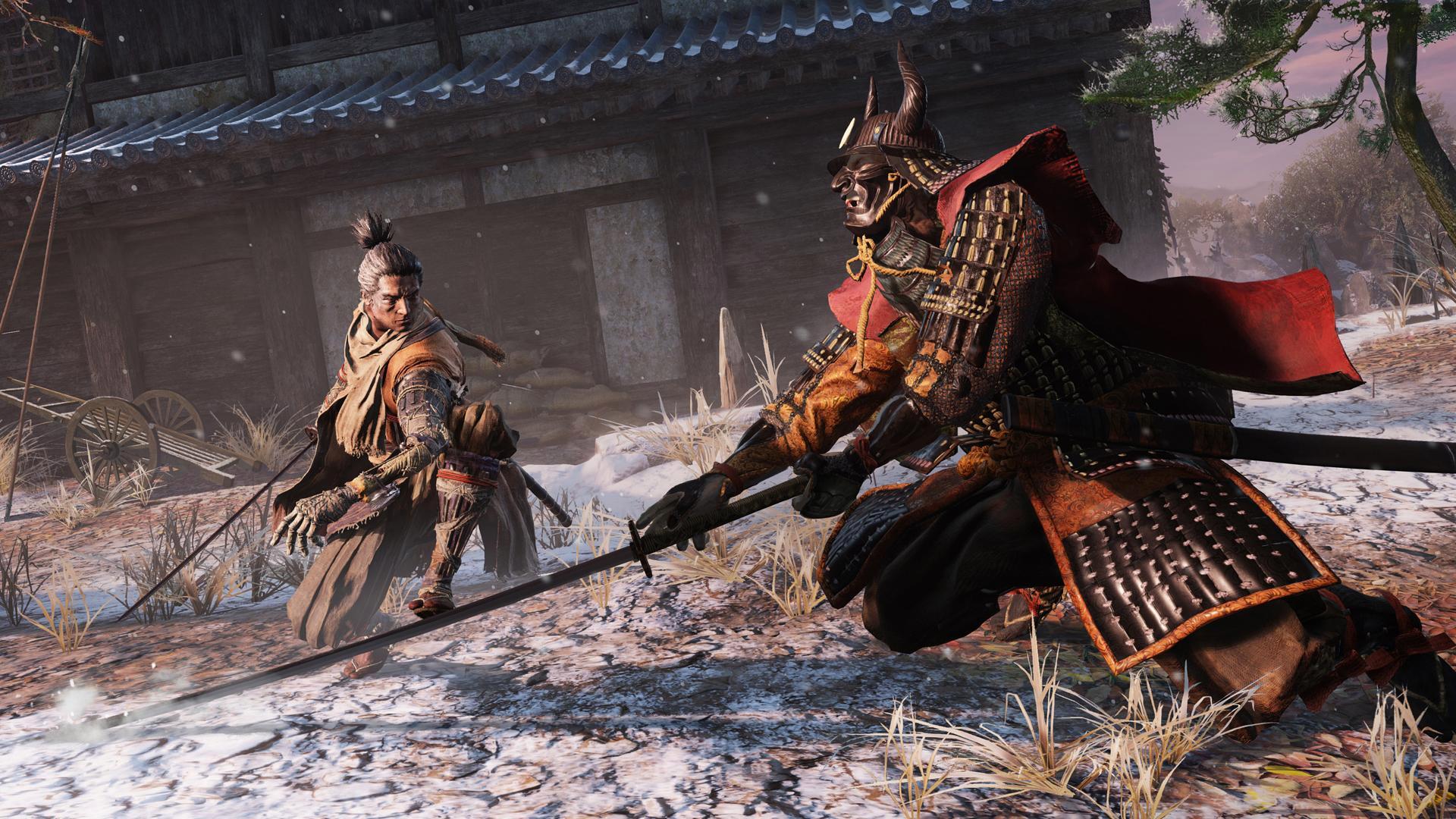 Martial arts and hidden skills - what is it?

Wolf's combat talents are divided into two types. The first one is martial arts, an active element of skill with a sword, which must be added to the character’s equipment for usage. You can use only one such skill at a time. But the hidden Ninjutsu Techniques are always available.

You can unlock skills from familiar and closest Idols by selecting the desired option. Each skill is worth a certain amount of experience points that you get after killing enemies. The problem is that the experience in Sekiro: Shadows Die Twice can be lost after death - each Wolf's death of  takes away half the earned points. The only way to avoid loss is Invisible help.

Martial arts and hidden skills are distributed over a large tree of talents - The Shinobi Skill Tree and The Prosthetic Arm Skill Tree. The first branch is focused on various combat (and not only) techniques that allow improving all sorts of samurai characteristics. The second, which is logical, enables you to expand the arsenal of tools in the prosthesis. The source of new skills can be drawn from esoteric texts, which you can get for victories over bosses. Sometimes you have to look for them in various shelters scattered throughout the game world. And also earn experience for unlocking the found talent. But who said it would be easy? 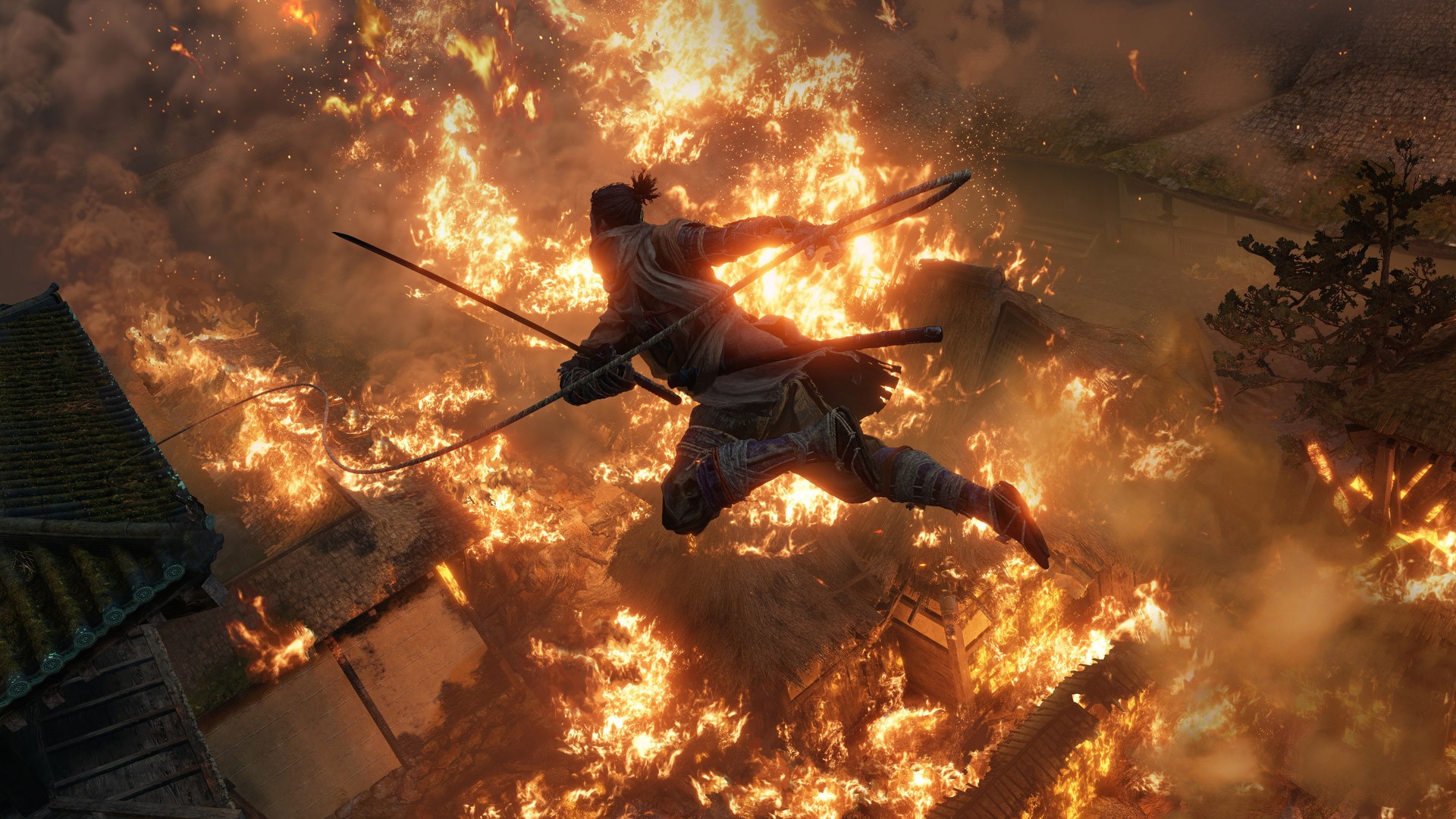 Where to look for texts in Sekiro: Shadows Die Twice?

Exoteric texts, as already mentioned above, are scattered around the massive game map. You’ll have to make a lot of effort to find them, but with our guide, the search will be more straightforward. Go.

The most accessible perk that Sculptor gives to character. After the end of the prologue, it is enough to earn at least one skill point by killing soldiers in the Ashina Outskirts. Collect the points, go back and talk to a strange old man who saved Wolf’s life.

This text is also located near Sculptor, but it will be somewhat more challenging to get it. You'll have to find and create three tools at once for the prosthesis. All of them are in the starting points of the game, and we already wrote about the exact location in a separate guide.

You will find a Loaded Shuriken and a Firecracker in Ashina Outskirts. A Loaded Axe and a Fire Launcher will be in Hirata Estate. Find at least three tools and take them to Sculptor. He will give Wolf the desired text after the third tool.

The victory over Gyoubu Oniwa, the boss of the Ashina Outskirts final location (Ashina Castle Gate Fortress Sculptor's Idol) will reward you with this text. Don’t leave the battlefield after the fight and run to the stairs leading to the problematic part of the fortress. You go inside, talk to Tengu of Ashina, who will ask you to get rid of a couple of "rats." 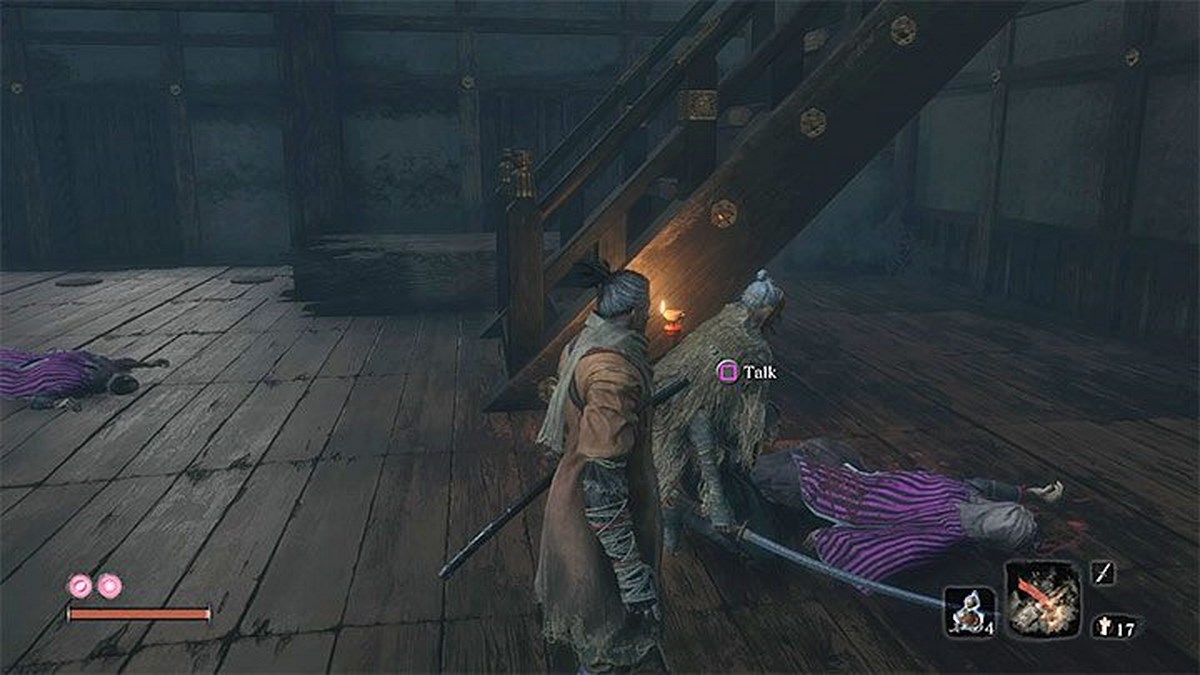 Next, return to the Sculptor’s Idol, where Gyoubu Oniwa used to be and examine the right side of the road. Small men in huge bamboo hats are sitting in a small garden. After defeating them, return to Tengu of Ashina for the award.

You’ll have to look for the necessary text in a small shrine near the Main Hall Idol in Senpou Temple, Mt. Kongo. Find an Idol called the Main Hall, next to which is the entrance to the caves. Be careful, because there are lurking monsters in the depths that can set fire to the neighbourhood with the character. The exit is at the top, and you can get there only with a hook. You will find a tall building after leaving the caves, in which there is a text with skill.

Wolf will get another text from Tengu of Ashina. You’ll find him near Idol called Great Serpent Shrine Sculptor's Idol. The reward will be given only when one of the latest improvements in the tree of skills opens. For example, Shadowrush. The new text allows you to improve the version of the final skill - Shadowrush will add a new attack in the air after the upgrade. 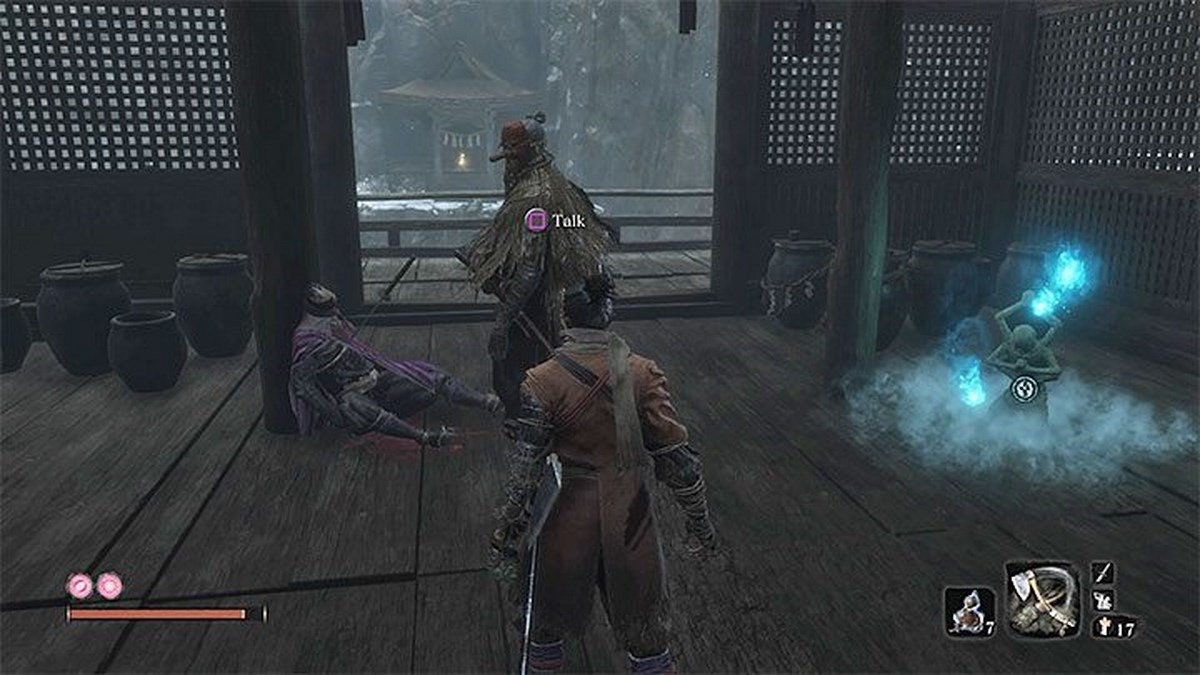 Skills you can buy

From merchants, of course. The first is Empowered Mortal Draw. You will find him in the Ashina Castle, not far from the Old Grave Idol. Find the statuette and jump to the left side of the building with a broken roof. A merchant sits inside, and you can buy a skill for 1200 Sen.

You’ll have to go to the Hirata Estate for the Floating Passage and look for the Dragonspring Idol. Then jump from the hill and look for the bridge on the left, and the lake on the right. We need to go to the lake where the guy who sells things for carp scales is sitting. You can kill the necessary fish and get Sen right in the lake. 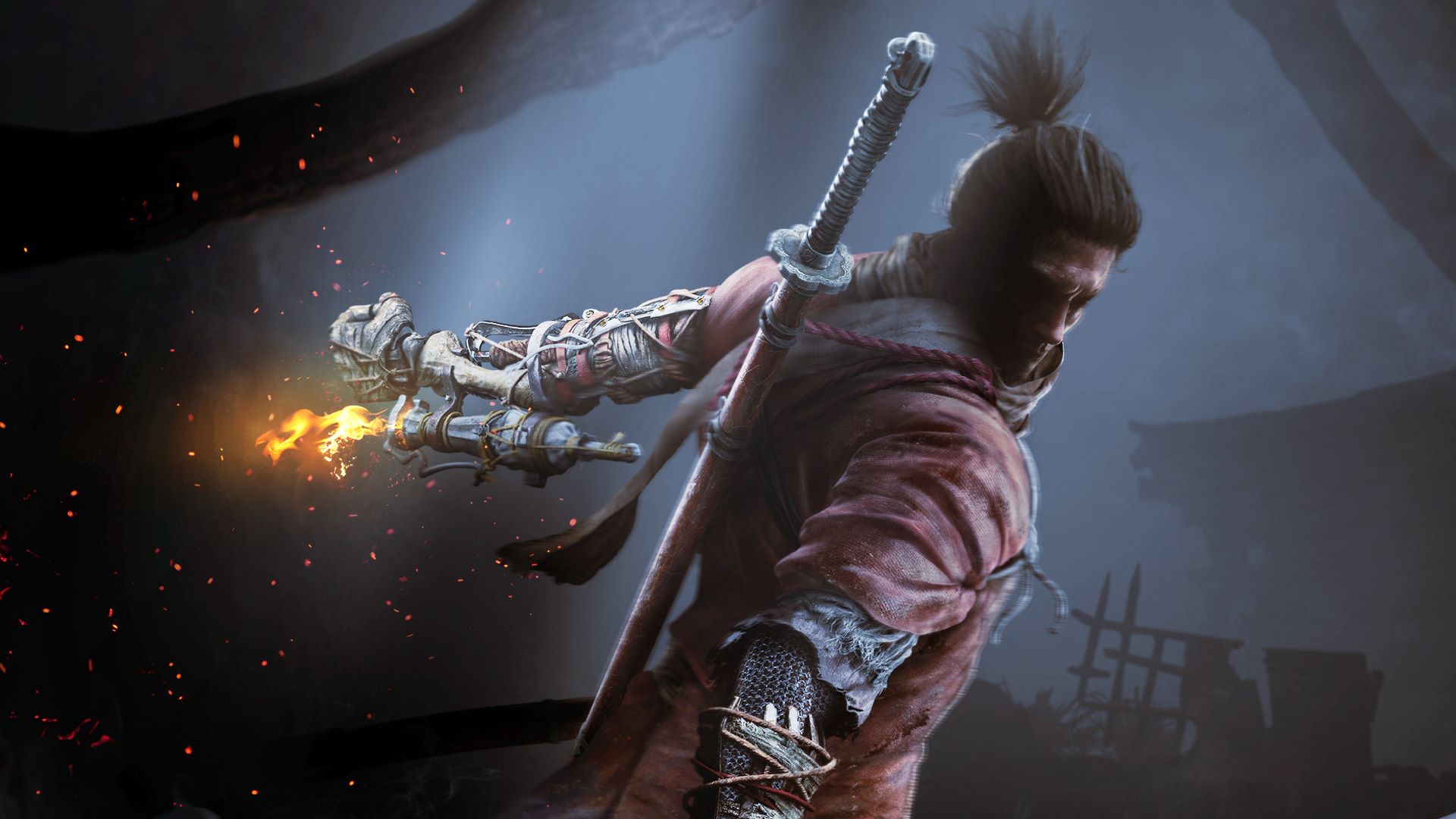 We collected our own top, which will help Shinobi to become an even more effective fighter.

One of the earliest skills and one of the most effective. Allows you to reflect the attacks of the enemy, which hadn’t been blocked in any way. Extremely useful against spearmen and those who are a fan of poking at Wolf with a sword. The main thing is to have the right reaction.

It’s a useful skill, working on Mikiri Counter strengthening. Successful implementation of counterattacking move increases the concentration of our warrior. The skill can be acquired later, at more difficult stages of the game, when every step and hit is worth its weight in gold.

Another hidden skill that allows you to parry enemy attacks during a jump. Very cool thing - especially useful in fights, where there are archers or shooters.

The second level of the Prosthetic Arts Skill Tree. First, you have to learn Chasing Slice. The attack combines a prosthetic arm and a sword, allowing you to vary the attacks.

The ability to heal and recover in Sekiro is the essential option, so all skills affecting the treatment must be discovered and used. Skill increases the effectiveness of the medicine from Gourd Seeds, and you know what to do.

The second level of Shinobi’s healing skills allows you to replenish your health scale with a flask even more effectively. You have to save five points on it, but it's worth it.

After receiving the Ashina Arts text, unlock this skill first. It instantly destroys the concentration of ordinary NPCs, facilitating a fight with them. It also helps with bosses, tearing significant pieces off their scale with the focus for each hit. The only minus is that it takes a decent amount of time so that it won’t work out all the time.

Both skills appear after the Ichimonji opening, being a great bonus in Wolf’s arsenal of strikes. Both of them are focused on causing significant damage to the concentration of opponents.

This is where our guide ends. We hope that it’ll bring you some benefits and help you to win bosses in Sekiro: Shadows Die Twice a little faster and easier. Good luck in the battles!