Fallout 76 is not quite a typical game in the series: new locations, lots of changes in mechanics, and most importantly - the action takes place in an online mode, where you will meet real people and try to establish certain relations with them. We had quite a long time to understand Bethesda's new kitchen. It turned out a small collection of tips and bits of advice that will be useful for beginners. Ready? Let's get started. 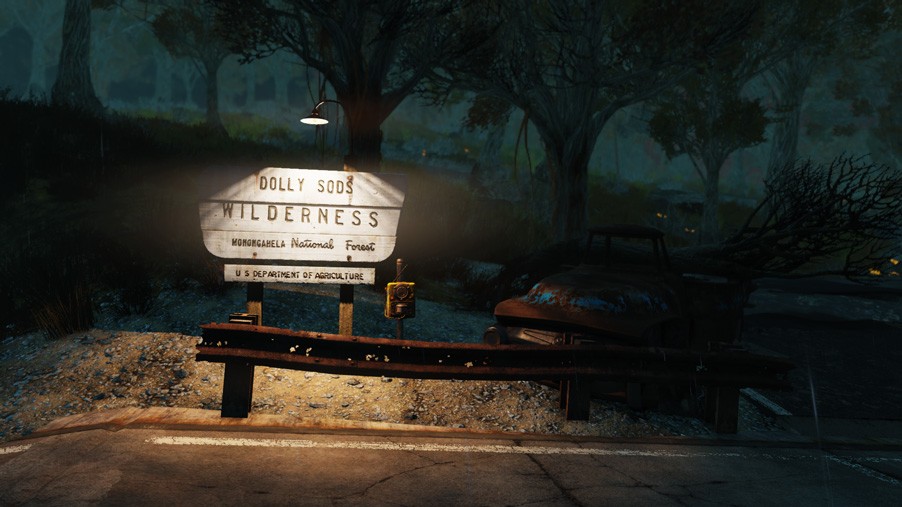 Every new Fallout game there is a new region for players to get acknowledged too. Fallout 76 introduces us to Appalachia: a territory placed in West Virginia and its surrounding states.  Reddit user RusskiePotato made a special interactive map app. It helps players with navigation and shows a lot of buildings and other interesting things. Here's the link.

Fashionable clothes do not bear any advantage but beautiful appearance. If you want to survive in the radioactive lands of Appalachia, you will have to drag a bulletproof vest or find a power armour set. We've made a guide with some tips on finding power armours.

Weapons and armour can break, and you have to repair them. This can be done on any tool in the region or in your personal camp. If a piece of equipment breaks down, it will not disappear from the inventory, just simply cannot be used.

Main parts of power armour are often located at stations marked with a yellow icon on the map. If you come across one of them, just take the armour, it will add to your inventory and can be folded there until the character reaches the required level. 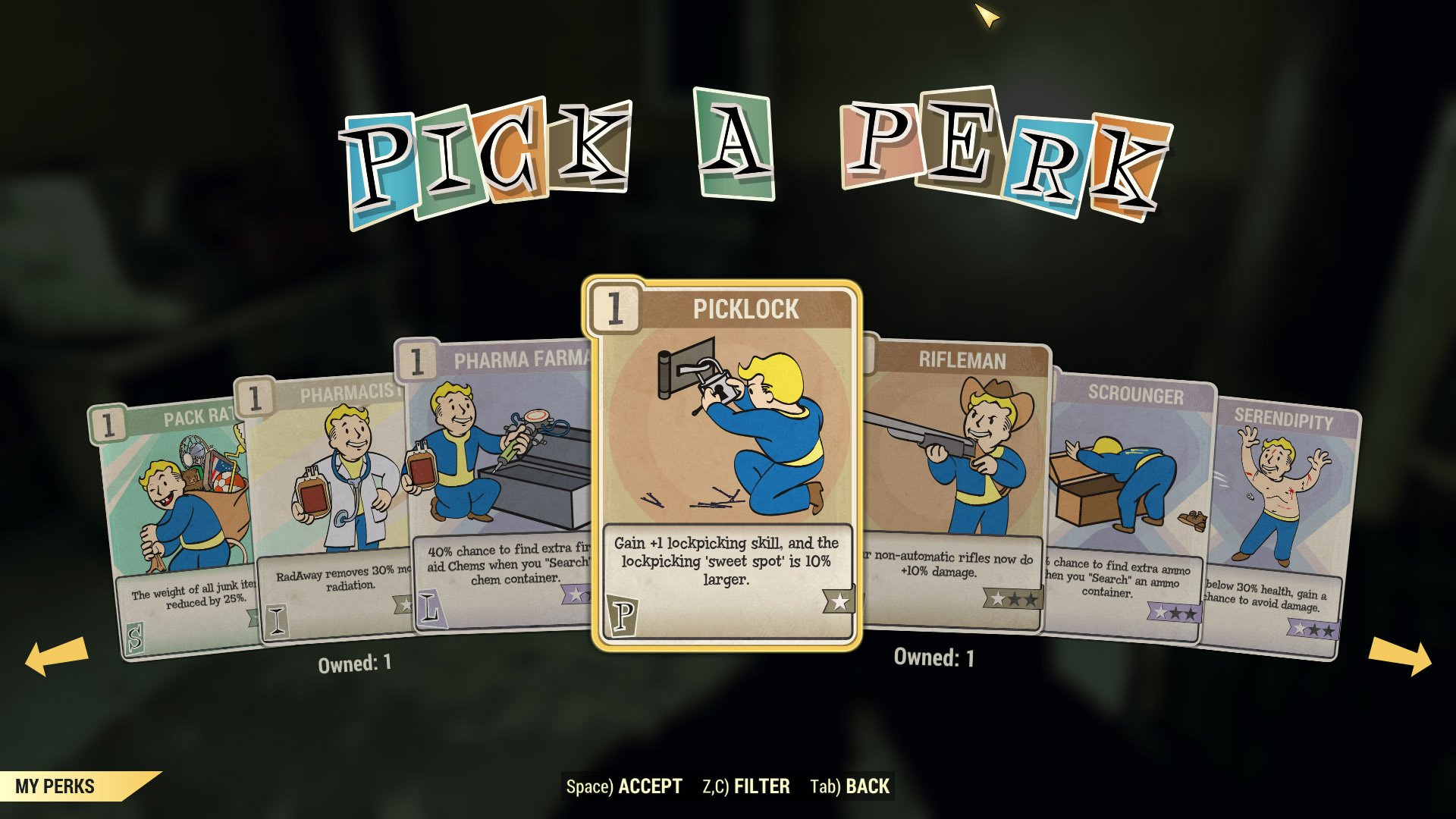 The skill system is slightly different from the usual. You can allocate points for one of the characteristics of SPECIAL or select the card perk. This is a new type of card that is issued upon reaching a new rank in SPECIAL. Its bonuses drop randomly. For example, when improving Charisma, you can drop a card to improve melee weapons damage.

Same card manipulations will have to be done to improve your hacking abilities. The cards you need are called Hacker, Expert Hacker, and Master Hacker.

How to fight diseases and mutations

Reaching the fifth level, your character will begin to be exposed to additional danger in the form of diseases or mutations. Diseases are treated with medication and healthy sleep in a comfortable bed. By the way, character's death does not save him from disease or radiation, which he can pick up while travelling around the lands of Appalachia.

You can reduce the radiation level of your body only with the help of Antirad tablets. If you leave everything as it is, a character will begin to mutate and not necessarily for the worse. Useful changes can even be saved using the Starched Genes card. It allows you to save any active mutations or prevent the emergence of new ones. 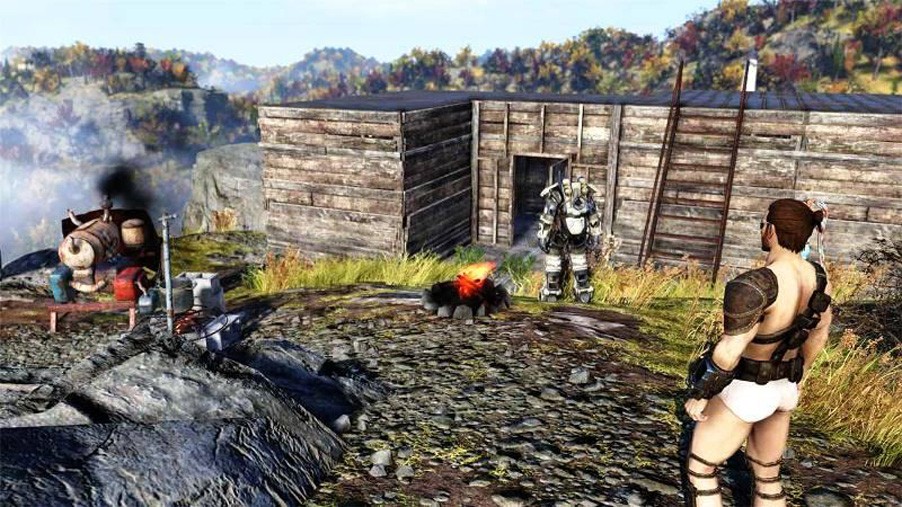 First, you need to make sure that you have a melee weapon not far from hands. Ammunition is not easy to find, especially at the beginning of the game, although guns are everywhere and in large quantities. Try to collect and store any garbage, periodically visiting the workshops, where you can create cartridges and bullets for your arsenal.

VATS is still your best friend, nothing has changed here. Even if there's silence, do not forget to check the area, including regular mode. This allows you to avoid hiding enemies, minefields and other traps. The main thing is not to get involved in, so as not to spend all the points before a serious fight or obstacle. VATS in Fallout 76 has changed slightly and highlights the target in real time. Hits percentage depends on distance and player statistics. Manually aiming is not necessary, unless you find a special card with a specific skill. Critical shots counter migrated from Fallout 4 to the new game, so you can always hope for increased damage if you hit the enemy’s vulnerable spots.

Do not be afraid of enemies whose level is higher than yours. They do more damage than their low-level counterparts, but for example, Bloatfly can be killed even before he gets close to his strike distance. But to fear hefty monsters with the size of a truck is still worth it.

Also, see our little guide on legendary weapons in Fallout 76.

Fallout 76, however, is focused on multiplayer. You can avoid most of the problems by creating your own squad with friends, but one way or another, you will have to deal with people who want to kill you. The question is not how to avoid death, but how to get revenge. It is best to find a code from a nuclear missile with your group and launch it at the enemy base. I love the smell of napalm in the morning ©

In PvP mode, you will not destroy all life with impunity. If you allow yourself too much, a reward for your head will be named, and the mark with your position on the map will appear on the screens of the other players in the area. The death of the character deprives him of all the collected trash except for weapons and ammunition.

The game has a lot of craft stations. The most accessible at the beginning of the game - Vault 76 and the Overseer's Camp. But there is often a line there, so it is better to invest in creating your own repair shop at your personal camp. Do not forget at the same time to create one at your own Vault-Tech warehouse, where you can store items and trash, suitable for making ammunition and other stuff.

Try to pick up all the garbage, which in the process of crafting turns into basic components for the manufacture and modification of weapons with armour. If your character dies, all the trash remains in the death bag, which you must pick up faster than anyone else. Do not forget to also move the camp between safe places in order to avoid an attack or a strike with a nuclear missile. 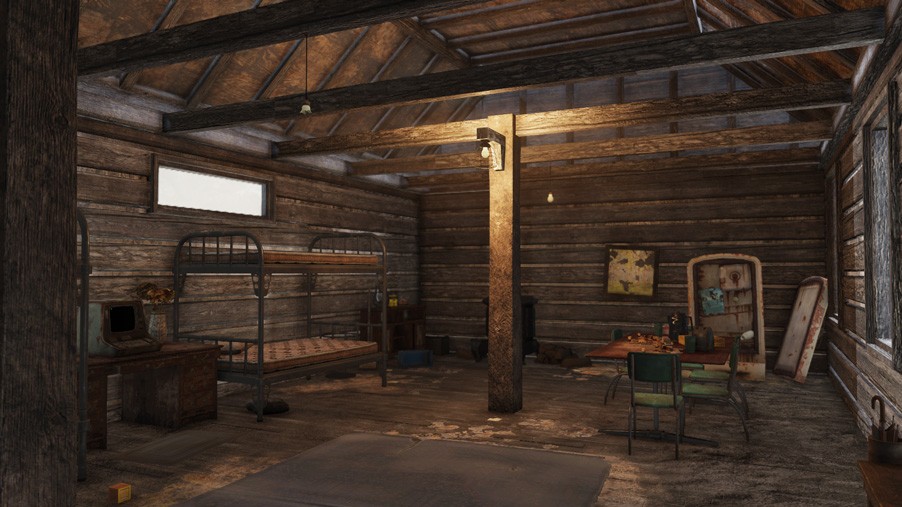 Searching for recipes and modifications

Food recipes and improvements blueprints are scattered all over the map: they can be found in boxes, kept by merchants and other players. If you disassemble a weapon or armour in perfect condition, there is a chance of dropping out a recipe to improve this item. All manuals of cooking food and drinks players receive as they progress through the main plot.

Few tips for a beginner

These tips should be enough for a good start of the game. And then it is all about your luck, but we still recommend playing Fallout 76 with friends, it's much more fun and interesting. Good luck!