There are a lot of guns in Red Dead Redemption 2. And I mean A LOT. This is understandable because the West, though not so wild already, still remains the land of harsh men with a bunch of guns. WePlay! Editorial decided to get to the bottom of the characteristics of the firearm in RDR 2 and to present you the best examples of American gunsmiths of the XIX century. 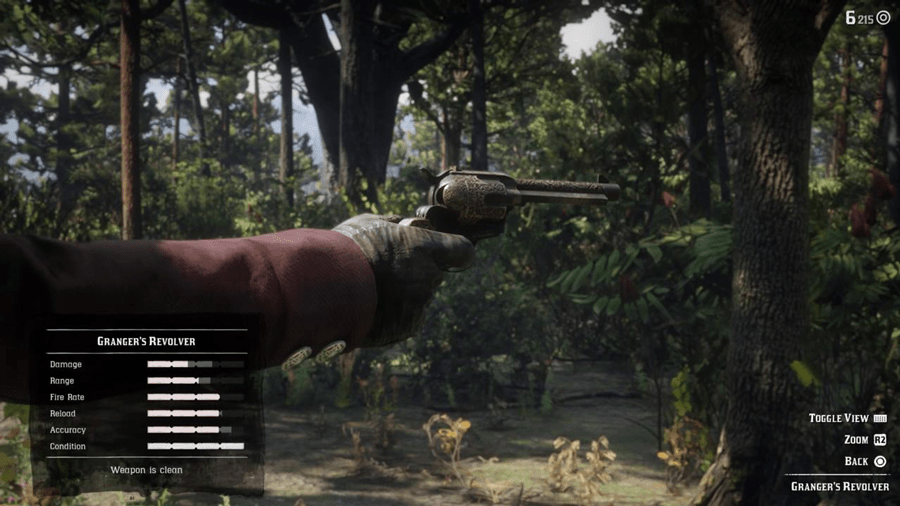 The favourite weapon of the cowboy will become your reliable companion in adventures - this is a good option with convenient aiming and good damage. A special feature of revolvers is the increased speed of fire without aiming, but the best way to shoot from the hip is on the short distance.

The very first weapon you get in RDR 2. The weapon for farmers was invented by Colonel Colt, who didn’t only create the symbol of the Wild West, but also became the founder of the whole new revolver culture. After each shot, you have to coax the trigger again, so shooting quickly with this model will not work.

You can buy it from any gunsmith at the very beginning of the game. From options - Flaco's revolver with silver finish and polished bone handle. It can be removed from the corpse of Flaco Hernandez and cannot be improved. Granger’s revolver is found on Emmett Granger’s corpse after a duel in the Gunslinger mission.

A double action revolver sacrifices damage and accuracy for a higher firing speed. The key to this property is the double action mechanism, which allows to accelerate firing, but it is the worst long range gun in the category.

Where to find: available at all gunsmiths after the mission "A Strange Kindness " in the second chapter. Or you can pick it up for free in the third chapter from Sean before the house heist. In real life, the gun appeared in 1892 and became the reason for the creation of the official police colt.

Algernon's revolver is given as a reward for completing side quest in Chapter 4. Micah's Revolver can be found on top of Mount Hagen in the second chapter.

The Schofield revolver or simply Smith-Wesson is distinguished by improved damage compared to the Cattleman Revolver. It has to be recharged after each shot, but it is good. The revolver is based on the Schofield model number 3 by Smith and Wesson. Released in 1870 for 44 caliber.

Where to find: any gunsmith after the mission "Blessed Are The Meek".

You can get Calloway's revolver in the next Shooter’s quest, and Otis Miller's revolver is in Chella Springs' chest as a prize for the treasure hunter. 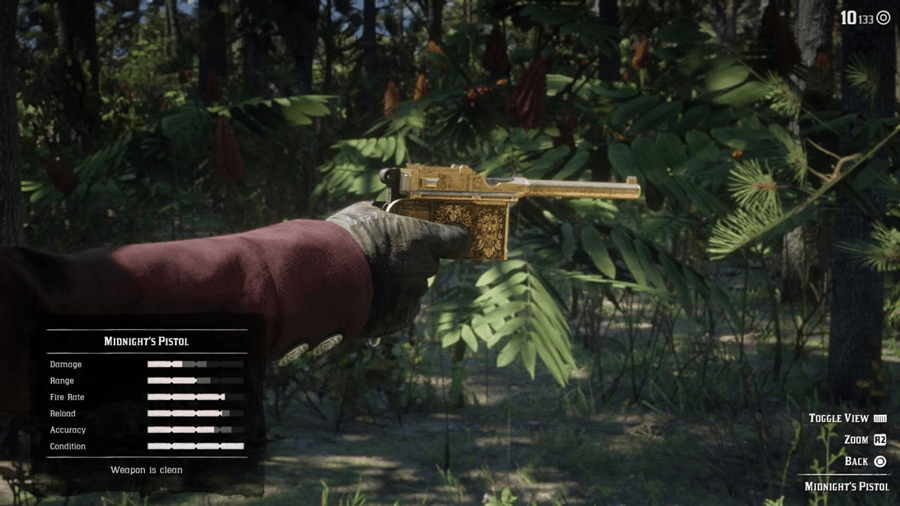 They differ from revolvers by special ammunition, they shoot faster, but they cause less damage. In general, to favor the pistols is logical, since the weapon is just more modern. As soon as the semi-automatic pistol and Mauser become available, there is no real reason to hold on to the revolver, except for the desire to remain a cowboy to the bone. Although there are improved firearm samples, they will appear in the game rather late and will be expensive, so for the bigger part of the plot, you will have use revolvers.

Manual Wesson Multi-Charge Pistol. This is the first model of the class of pistols, and it is certainly not the best one. Additional damage in comparison with a revolver for cattle breeders is good, but the firing speed and reload time leave much to be desired.

Where to find: any gunsmiths from the very beginning of the game. In real life, a volcanic pistol was considered a very weak model and was produced in limited quantities in 1854–55.

This is the first gun that you can buy in the store. Pretty weak damage leveled by the highest rate of fire. Eight rounds in the magazine and quick reload makes a semi-automatic pistol the best option in this category.

Where to find: In Saint-Denis and Valentine at gunsmiths after the fourth chapter. The gun is based on the model Borchardt C-93.

This is the last gun that can be found in Red Dead Redemption 2. It does more damage compared to the semi-automatic model in exchange for worse reloading and shooting speed. But there are more bullets - as many as 10 pieces in the magazine.

OPTIONS: The Midnight’s Pistol in the gold-plated version can be taken from the body of Billy Midnight in one of the Shooter’s quests.

The middle ground between rifles and pistols. They have improved damage, range and accuracy compared to pistols and revolvers, but they are inferior in terms of these indicators to a rifle. Carbines are ideal for fighting at an average distance against a superior number of enemies, where the large size of the magazine will allow you to turn the scales in your favor. You have to reload the weapon manually after each shot.

The first main weapon in the Red Dead Redemption 2 with a small magazine is a nice complement to the revolver. But you will not want to use a regular carbine after Lancaster Repeater.

Where to find: you automatically get a weapon in the first chapter. In real life, the rifle is known as the 1860 Spencer carbine.

This rifle will be with you for most of the game. An excellent weapon with a magazine for 14 rounds with a good range of fire and accuracy.

Where to find: in the second chapter a rifle will appear in all gunsmiths of the city after the mission “An American Pastoral Scene”. In real life, the Lancaster repeater originated from the Winchester model of 1866 and became the cult weapon of the West.

It appears quite late in the game to make any great difference in the life of gamers. It does more damage than the Lancaster model, but it shoots and reloads more slowly so that it hits the target worse. Oh yeah, Litchfield has two more rounds compared to the Lancaster.

Where to find: the gun appears in the sixth chapter during the mission "Goodbye, Dear Friend" and is available at any gunsmiths after the quest. In reality, the Litchfield rifle was the predecessor of the Winchester model of 1866 and was used in the Battle of Little Bighorn (US Civil War, 1876). 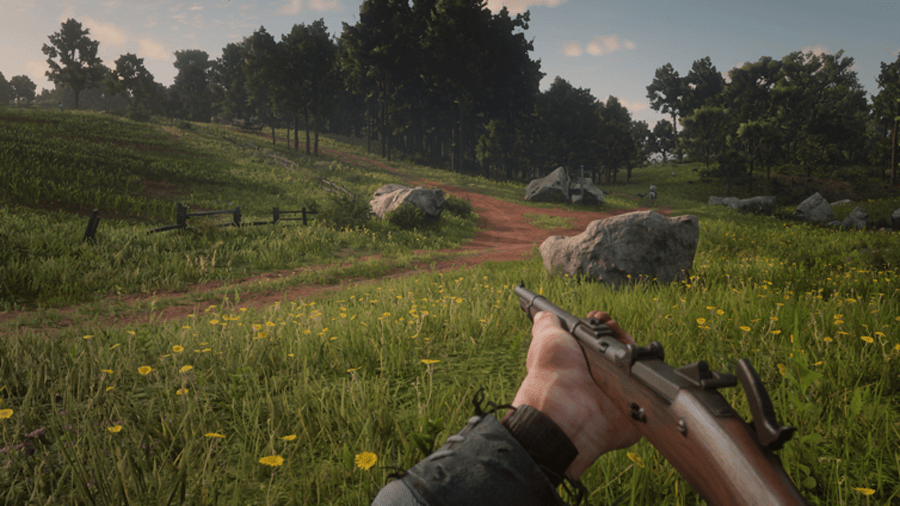 Almost universal class: good in shootouts at any distance, hunting, has excellent damage and rate of fire.

Unique weapon. At least by the fact that it is an ideal option for hunting - a small caliber does not damage the skin of even the smallest animals. It is best to use it on a hunt, as it is not very effective against people.

Where to find: available at all gunsmiths from the very beginning of the game. In real life, was based on the model of Winchester 1890. It was a very popular weapon - more than 850 thousand copies were released between 1890 and 1941.

A weapon with excellent damage, but with a slow rate of fire and the lack of a magazine. The model is based on the Springfield 1873 Trapdoor rifle. The first rifle with a bolt, adopted by the American army, by the way. It is probably not worth buying. Available from the very beginning of the game at all gunsmiths.

Excellent and very accurate weapon for fighting at medium range. High damage, range and accuracy, combined with a decent reload rate, make a sliding-bolt rifle an excellent choice for everyday use.

Where to find: given to the player in one of the missions of the third chapter and then can be found at any gunsmith. Historically, the rifle remained as an unsuccessful attempt to replace the 1873 Springfield model - the side bolt was often clogged with mud, and soldiers complained about it to the command. 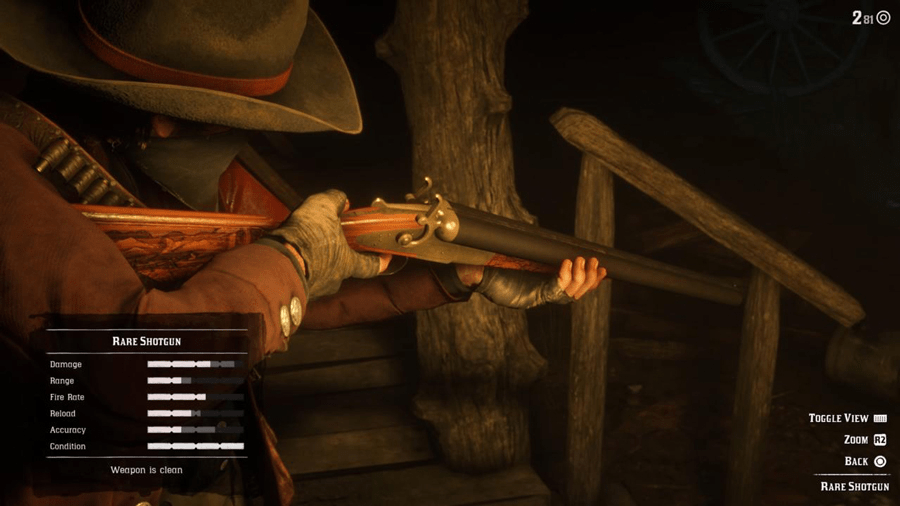 Traditionally, shotguns are extremely powerful at shooting, but suffer from inaccuracy and low range of flight. Shotgun point-blank is able to take off a man's head. Large-caliber bullets fly further and, if hit accurately, are capable of knocking down a bear. Ideally, this class of weapons should be used when securing buildings or methodically shooting enemies during a horse chase. The most important thing is not to try to shoot at medium and long distances.

The unique feature or a sawed-off shotgun is that it makes an excellent secondary weapon. This is where the advantages end, except that at the very beginning of the game it can be used to point-blank at predators or people who have come too close.

Where to find: in the first chapter, after which the sawn-off can be purchased at any gunsmith.

It is quite a good option at the beginning of the game for shooting in an enclosed space. Well, that's all.

Where to find: you can pick up in the second chapter of one of the missions. Available at all gunsmiths from the very beginning of the game.

Options: This shotgun is available from all gunsmiths. It can also be picked up at the end of "Paying a Social Call".

A reliable companion when shooting at close range. It requires reloading after each shot, but the rate of fire is still faster than that of a  double-barrel shotgun. In fact, you can stop at the pump shotgun - the following models do not greatly surpass it in performance.

Where to find: sold in all gunsmiths after the mission "Pouring Forth Oil" in the second chapter.

It has a higher firing rate than the pump one, but worse accuracy. If you already have a pump action shotgun, then semi-automatic is not really needed.

Where to find: at any gunsmiths in chapter four. By the way, in real life, the shotgun was not released until 1902, but then production lasted for almost a hundred years, ceasing only in 1998.

It does not have any significant advantages compared to the pump shotgun, except that it can boast an extra round (6 instead of 5). One of the varieties of repeating shotgun lit up in the hands of Arnold Schwarzenegger in "Terminator 2".

Where to find: from any gunsmith in the sixth chapter. 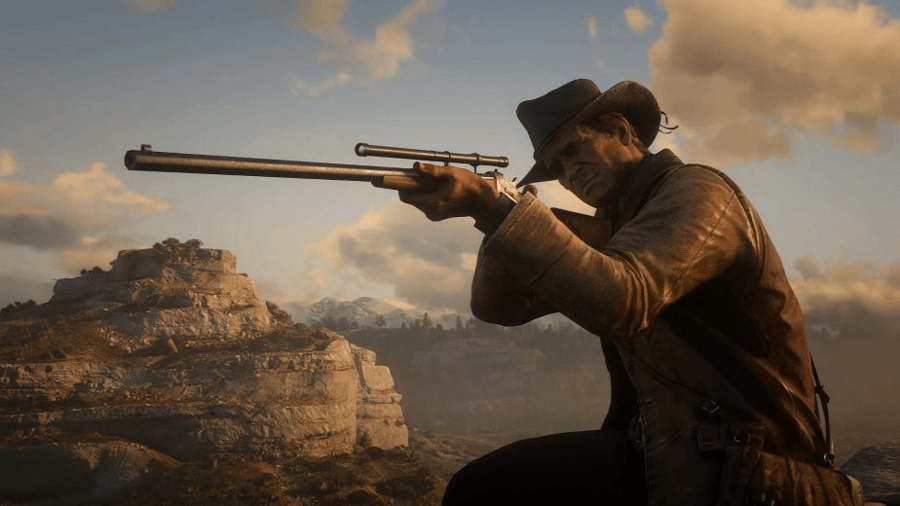 Extremely powerful rifles that can only be used with a telescopic sight. They have slow reloading, but they have better range and high accuracy. It is best to use them to hunt large predators or kill people at a distance.

The first sniper rifle in the game and immediately such a decent option. It has great damage, aiming variability and great accuracy. Based on the Remington rifle with a "rolling block" bolt.

Where to find: any gunsmith after the mission "Pouring Forth Oil" in the second chapter.

Options: A rare rifle with a crane bolt can be found on one of the missions in the third chapter, if you kill the sniper in the quest “Magicians for Sport”.

The model has excellent shooting speed and fairly fast reload compared to its predecessor. It is a pity that it appears in the final part of the plot, and it’s not enough time to enjoy the rifle. In reality, the rifle existed only on the drawings, but the previous model of the Carcano M91 series was used since 1891. In 1963, Lee Harvey Oswald shot John F. Kennedy with such rifle.

Where to find: any gunsmith after the mission "Goodbye, Dear Friend" in the sixth chapter.

This is where we end, pal. Get yourself a pair of boots, some nice gun and a happy hunting ground!