The craze about the autobattlers is similar to the Battle Royale phenomenon that happened a few years ago. When people were playing Dota Auto Chess in Dota 2 client, they just spent time with fun, but once big companies decided to develop autobattlers, everyone went mad. Mobile markets are full of cheapy clones, dev teams are crunching to release new updates, and the esports block is growing very fast.

WePlay! Dota Underlords Open starts very soon, so we decided to make a huge F.A.Q. (Frequently Asked Question that is, just in case) on the game besides the great list of guides we've already made.

You can either hit ctrl+F and try to find your question or follow the table of contents:

How can I play Dota Underlods if I'm not familiar with Dota 2 at all?

Don't worry, Dota Underlords only borrows Dota 2 lore and micro-mechanics (like Phantom Assassin's critical strikes, Dazzle's healing, Slardar's bashes and everything), while the gameplay itself is not MOBA-like at all.

What do AoE, DPS, DoT, DAC, DU and other acronyms mean?

AoE is for Area of Effect (damage dealt over a specific area), DPS is Damage Per Second, DoT — Damage over Time, DAC — Dota Auto Chess, DU — Dota Underlords, etc. All the acronyms come from Dota 2, and as long as Dota Underlords is Dota 2's branch, it's better to check Dota 2 glossary over here.

How long will the match last?

Almost all matches take from 25 minutes at least (if you are losing) to 45 minutes at most (to make top-2).

When can I get loot?

Sword and shields icons — what do they mean?

Sword points which you are attacking this turn, Shield — who you are attacked by (defending from), you'll see his pieces on the board.

How do I understand who am I attacking next round?

Unfortunately, there's no way to know it. The game chooses your opponent randomly but never repeats itself.

How are the players matched? Who is attacking and who is defending?

As we've already pointed in the question above, the players are matched at random.

You'll have two copies of your board each round: attackers and defenders. The defending party is what you see on your board. If you lose — you HP decreases. You can't see the attacking party, but they are fighting for sure, and if they lose — don't mind it. Your aim is to defend at first.

What is Shared Pool? How do I get the heroes?

Each match has a limited hidden pool (not Gaben's) of heroes. It means that there in every game, the number of units for each unique Hero is bounded. And the pool is common for all the players. Read as follows: if the players purchase and level up Tiny too often, the more Tiny's there are, the lesser is the chance to get another one in the shop.

What are the prices for buying units?

The number of units available in a shared unit pool  based on their cost:

This is how you will receive heroes in the shop, depending on their level:

Do I share the units in the shop with other players?

Not exactly, but yes. You choose one from three available, but the probability of getting the same heroes again and again decreases. Check the first point of the "Units and Shared Pool" section above.

Everyone is getting the same heroes, should I pick it also? What are the chances for me to get it?

You may take this hero, but the more there are among the players, the lesser is the chance to get another one. Check the first point of the "Units and Shared Pool" section above.

But if a player gets eliminated, what happens to his heroes? Or if one sells heroes in no need?

That is tricky. When a player is eliminated, his figures are transferred into the shop, yep. But they are broken down into level 1, if necessary. The same thing works for selling heroes.

How do units choose who to attack?

Simple: the attack the closest figure. First vertical, then horizontal axes, if there are two or more targets too close. But Assassins jump to the back lines!

What's the deal with Assassins' movement?

Assassins jump to the furthest spot reachable. If they are in the backline or the corner, they'll teleport near the frontline or centre of the board.

The diagonal lines. How do they work?

As if they are one cell away.

If I put duplicate heroes on the board, will they have synergies?

No, they won't. It would have been too easy, right?

If my units die, will Alliance synergies still affect?

Yes. Units get synergy effects when the round starts, so if a unit dies, the buff will still work.

What about Druids? How do they work?

You can read more about Alliances and Synergies in our guide: Dota Underlords – Alliances & Synergies

When do units cast their skills?

Units cast spells or use skills when they have 100% Mana, the cooldown is ready, and there's no Silence effect.

What is the skill cooldown? How can my units cast again?

Cooldown (CD) is the time a unit needs to cast a particular spell again. There's a cooldown timer on you HUD: the 3rd white-coloured meter below the HP and mana bars. When it fills up and becomes multicoloured again, a unit will cast again (if there's enough mana).

How does Silence effect work?

Silence abandons a unit from using skills and spells. But it doesn't affect Passive Abilities. Lifestealer will still get healed when attack and Kunkka will have his AoE damage. Silence does not affect Items either.

How do units gain mana?

Does it work like in Dota Auto Chess where you get mana while dealing damage from casting spells?

Units attacks are physical. But some spells deal physical damage, some deal magic. It depends on each ability. Maybe, Valve will introduce pure damage, like in Dota 2, but we can't say for sure.

Is Arc Warden's clone a spell?

If you want to know more about how Mana and Spellcasting work, just read our guide: How to gain mana and cast spells in Dota Underlords.

Yes, they do. Global items like Unstable Reactor stack but using some of them repeatedly just won't help. For example, Fall from Grace turns Humans into Heartless and activating it again won't work as long as you're out of Humans.

No, cleave is not affected but passive abilities.

What about "once per battle" items like Mekansms? If I have multiple copies, they won't work (like in Dota 2)?

It will work simultaneously, don't be afraid.

Which heroes are best to equip with Mask of Madness?

Is there a Ranked System in Dota Underlords?

But I want to play Pubs (non-ranked) matches

Since Dota Underlords is in open beta at the moment, there are only Ranked matches. But with the beginning of Season 1, Valve will divide the system into Normal (Pub) and Ranked matchmaking.

Don't worry, all the ranks will be soft reset, and the badges will be hard reset when Season 1 starts.

How does Ranking work?

Matchmaking works in a complicated way, so you better read a separate article if you want to understand it: How to Rank Up in Dota Underlords: Ranking System Guide

Can I lose rank?

You can lose your hidden MMR, you can lose rank levels (the roman numbers under the badges), but you can not lose your rank. It means that you can't rank down from Smuggler to Enforcer.

I can't rank up after winning several times, what's wrong?

Since your MMR is hidden behind the badge, you may have dropped your MMR way too below the medal. Just keep winning until you reach the required level. 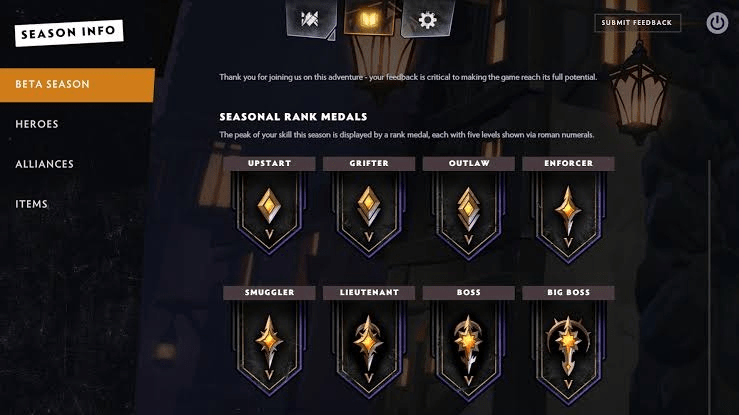 What should I do to rank up? How many wins are needed?

First, you have to play 25 matches to calibrate you Rank. There might be ups and downs, it's okay, but once you complete the calibration, you will receive a badge. In order to raise MMR, Upstarts must place in top-6 and Grifters and above must place in top-4. You should know that placing below someone who has a worse ranking than you might affect your rank also.

Note that Dota Underlords is still in beta and Matchmaking System may as well be reworked.

You can try some good strategies and tips in Dota Underlords from the list below.

Another quite a fascinating strategy in Dota Underlords in Open Fort. It works as follows.

As we have pointed before, you'll get more gold when you have a losing streak. So, you can just purchase units to clear loot rounds (1-3, 5), and then just start losing. Such a strategy will help you to gain a lot of money very quickly: you are not buying/upgrading units, and you have bonus income thanks to your losing streak. Once you have 50 gold, start playing (when there are 50+ gold in your pocket, you will only get five coins per round). But try keeping that 50 gold, don't hit the ground running too fast, as you might pull the muscle.

Be careful! This one is very difficult as you need to feel the game well and hope for luck. You are literally exchanging your HP for Gold. Keep up the pace of "surviving but not spending", purchase tanks.

That's all, folks! The last thing we recommend you to do if you want to succeed in Dota Underlods is to read the guides we've made. You can either follow the tag or just hit the links from the list below.