Valve has released an update for Dota 2. Game balance has moved to 7.22c version. More than forty heroes were changed, but most of the changes is a slight balance in one direction or another. For example, the speed of Tusk movement was increased by 5, and the Magic Missile recharge from Vengeful Spirit is now nine seconds, instead of ten.

Among the items only Ring of Basilius has changed: its bonus damage increased from +7 to +8.

It is also worth noting the significant Chen nerf. Now he won't have an aura of damage, the cost of Penitence is increased, and the talents have become somewhat worse. 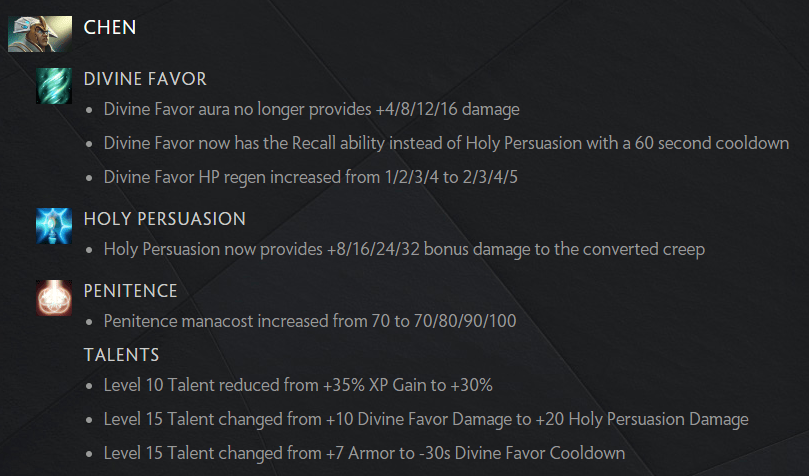 Tinker received a talent at level 15, giving him 150 gold per minute, and this makes it quite attractive, together with the improvement of March of the Machines.

We also will highlight the buff that Skywrath Mage received: its Concussive Shot now deals 100 damage on the first level, and at level 10 you can choose talent for a thirty percent gain in experience. Enchantress and Faceless Void have got positive changes too. Enchantress' Impetus range increased from 550 to 575, and it's matching the hero's attack range now. Void's Chronosphere radius increased from 425 to 450, which means that he could possibly return in meta, especially in public games.