Recently The International 2019 prize pool exceeded $30 million. There is more than a month left till the end of crowdfunding campaign, but all goals have been already achieved. You can think that Valve didn't expect the prize pool to grow so quickly. We decided to look into the current campaign and analyze the reasons of such success. As a little bonus, we're going to predict the final prize pool of TI9. 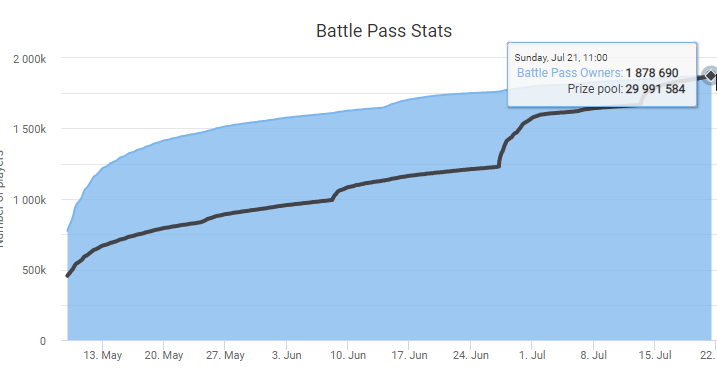 We can say with confidence that the reason is not in growing fanbase. Rpg.io parses the stats of all battle pass owners, and their amount is almost the same compared to 2018. This year we have 1,878,690 battle passes purchased. Last year it was 1,904,610. We have the same amount of owners, but this year they've paid more. It is worth mentioning that in 2017 a little over 2,2 million battle passes were bought.

The trick is not in Immortal Treasure Chest

Some could assume that Immortal Treasures were moved to some higher levels, but it is not exactly true. From the introduction of The International Battle Pass in 2016 the position of treasures was more or less the same. You get most of Treasure I from levels 1 to 80, Treasure II from levels 98 to 152 and Treasure III from 164 to 206 (there were a few minor changes with the third chests, but they were done in players' favor).

That's why you shouldn't explain such a boost with desire to collect all the Immortals. Instead we think of two main reasons of the TI9 prize pool success.

Well, you can still get 100 levels without investing your money: Valve cares about the progress system, so the players won't die from boredom. Moreover, this year is a little more player-friendly. However, different abuse "systems" were strongly nerfed.

First of all, the preventive ban wave for those who traded wins in pubs made a huge psychological effect: huge amount of abusers decided to play safe this year.

But the main reason is the new recycling system. Earlier you could get to level 1000 with less investments: 250 levels could be acquired from recycling of Immortal items. This year you don't get 2 levels per item so this whole feature became quite meaningless. The only way to get to the higher levels is by pouring quite a sum of money. And in this very moment we want to talk about the second reason. 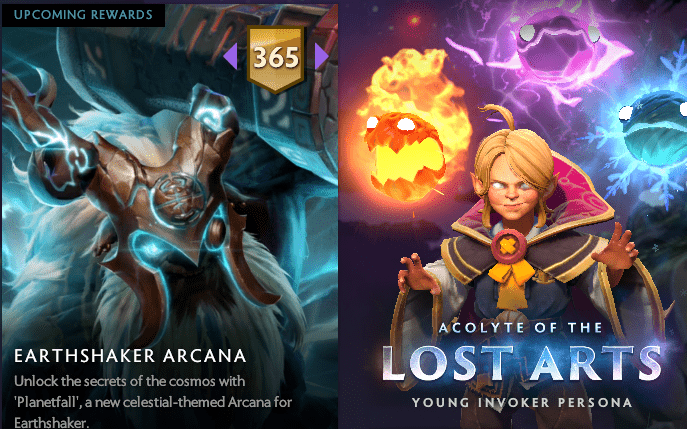 Those of you who bought Compendiums and Battle Passes since 2013 should remember when World Chasm Artifact, the Bracers for Enigma, were the most luxurious items you could get by leveling The International 2015 Compendium up to level 175. Back then, there were no mini-aegises and no mini-Roshan models. Later Valve figured out what to offer both to people who weren't investing much and to those who wanted the battle pass of max level. However, people who wanted to get levels 300-750 got relatively poor rewards. Benelovent Companion, Io Arcana released in 2017, opened the Pandora's box. Arcanas and other prestige in-game items, which could be only obtained by levelling the battle pass, started to attract great amounts of money.

Last year we saw Hell-Spar Anathema for Lion, and the chest with old Immortal items. This year Valve pushed the pedal to the metal: we get prestige item for Tiny, young Invoker persona and very eccentric Immortal set for Axe. It is very tempting to get level 425 this year and not everyone could say "no" to that. Considering these items are worth a pretty big buck, Valve came to rescue with this matter!

Trick the system and bring more money to GabeN!

Cyborgmatt keeps tracking all the stats regarding The International prizepool. The purple line here is TI9. We can see three huge spikes here. The first one is in the start of the sales. We believe it is connected with an option to insta-buy Level 100 battle pass. This allowed people to get 16 levels for free as well as boosting their batlle passes with less clicks and transactions.

The third one (around day 68) is connected with Collector's Cache II — a collection of very good hero sets. We won't go deeper into this topic — it boosted the prize pool by $1,5 million and it is completely fair.

The second spike (around day 52) is the most interesting to us. It is connected with the Summer Sale Bundle. You could get 120 levels and 18 treasure chests for $30. It was a really valuable offer for those who wanted to boost their battle pass. Considering you can't get levels from recycling, this bundle was aimed to help those who count every cent. Since it was an extremely good offer, Valve as usual introduced the limit of one bundle per account. However there was an exploit in their own shop.

Because of that everyone got the opportunity to buy two bundles. This is the main reason of huge prize pool boost. In 2018 The International got 4 million dollars of prize money during Summer Sale, but this year the growth was the whopping $6 million! You can see how substantial it is if you look at the graphics below.

The growth of TI9 prizepool between days 49 and 55 is too big comparing to the others. We think that was the main reason that we already have $30 millions to distribute for best players in the world.

We expect steady growth of TI9 prize pool. However it is not going to be fast because most of players who wanted to unlock some levels, have already spent their money to most valuable offers. New Invoker persona attracted a few bucks and we're left with only one trump card — Immortal Treasure III. Last year it attracted about a million dollars. This year the situation will be pretty much the same.

With 34 days left, the prize pool will be growing by 100-150 thousand dollars per day. This means that final prize pool will be around $35 millions, but we don't know whether it will surpass it. What we can say now is that The International 2019 is a tournament with the largest prize fund in the history of esports. Hooray!