Why I can't get the right hero in Dota Underlords: how the pool works

Why I can't get the right hero in Dota Underlords: how the pool works ⚡⚡⚡ Esports and gaming news, analytics, reviews on WePlay! The latest news on WePlay!

In this guide, we will try to answer the questions asked by many Dota Underlords players.

The chances of getting a certain hero from the first time depend on the following factors:

Everything is quite obvious with the first bullet point, the definition of rarity itself says that we will see the usual heroes constantly, sometimes the rare ones, and almost never — the epics. As the player's level increases, the chances of seeing such pieces (with green, blue and purple glow) increase.

And finally, the third point. Yes, you've read it right. Eight players have a common list of heroes for the whole match. This means that if several players bought the same hero, their chances to get the hero again and again (for the third time) decreases almost to zero: there will simply be no heroes in the store, the game will have nothing to give out. On the other hand, when a player from your match sells a hero, it returns to the common pool.

What is the heroes' pool and how it works?

Dota Underlords' store works not in absolute random and there are no 'hidden mechanics' (the ladder is still unstable, there is hide).

How many heroes there are in the pool?

The picture shows the chances of dropping heroes, depending on the level. As the player's level rises, the chance of rarer units increases and the odds of normal ones drop. 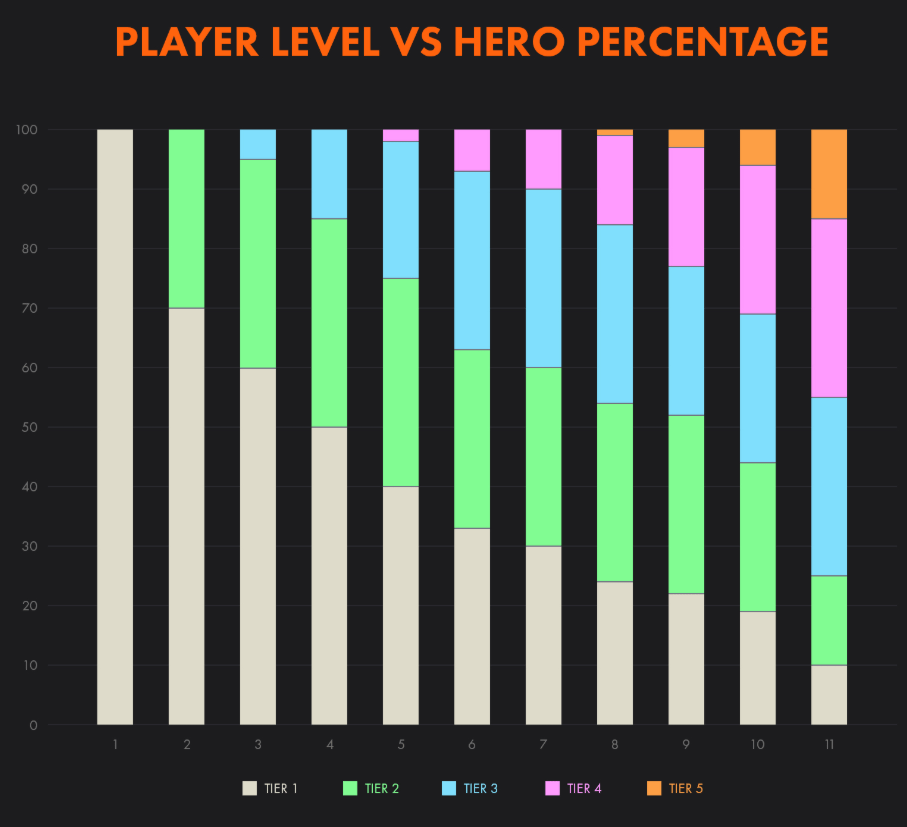 According to statistics science, it is very profitable to have green (Tier 2) heroes for 2 coins: they are always in prosperity from levels 2 to 9 (at the first level there are no green figures offered at all, and at the tenth level, the probability is reduced). Also, starting from level five, it is worth taking the "blue" (Tier 3) heroes for 3 gold coins.

What is the chance of getting a hero for X price?

You need to collect 9 figures to get a hero with three stars above the head. Imagine that in the fiftieth round 7 of 8 players saw in their store a hero for 5 gold and bought them at a time. There are three such heroes left in the common pool, and to raise this hero to the second star you need two more copies. The chances that the next two copies will come to you in the next round are close to zero.