Cmel, BBG, 4he, Ciaoknives, Yca4, MeNoHaxor and snofe are here for you to entertain with their games. Sure, today one of them will be the winner of WePlay! Dota Underlords Open and get $8.000. The others distributed $7.000 prize money between seven players. Let's start with the sixth game in Lords Alliance.

Cmel scored an impressive win streak with Warriors and Heartless in the early game and, as a result, enjoyed an excellent gold income. Yca4, MeNoHaxor and Joseph caught up with him.

The leader of the last day snofe didn't feel so comfortable, being in the last place on 10th round. BBG with the Hunters and Beasts after 12 rounds was dangerously close to elimination, 4he kept him company with Mages and Scrappies. Joseph took the first place with his beloved Elusives and Demon Hunters. Snofe, who found an original solution against the Elusives in Assassins,  Primordials, Mages and two Dragons, got the second place. But he was unable to oppose Cmel and his gang of  Brownies with Heartless. 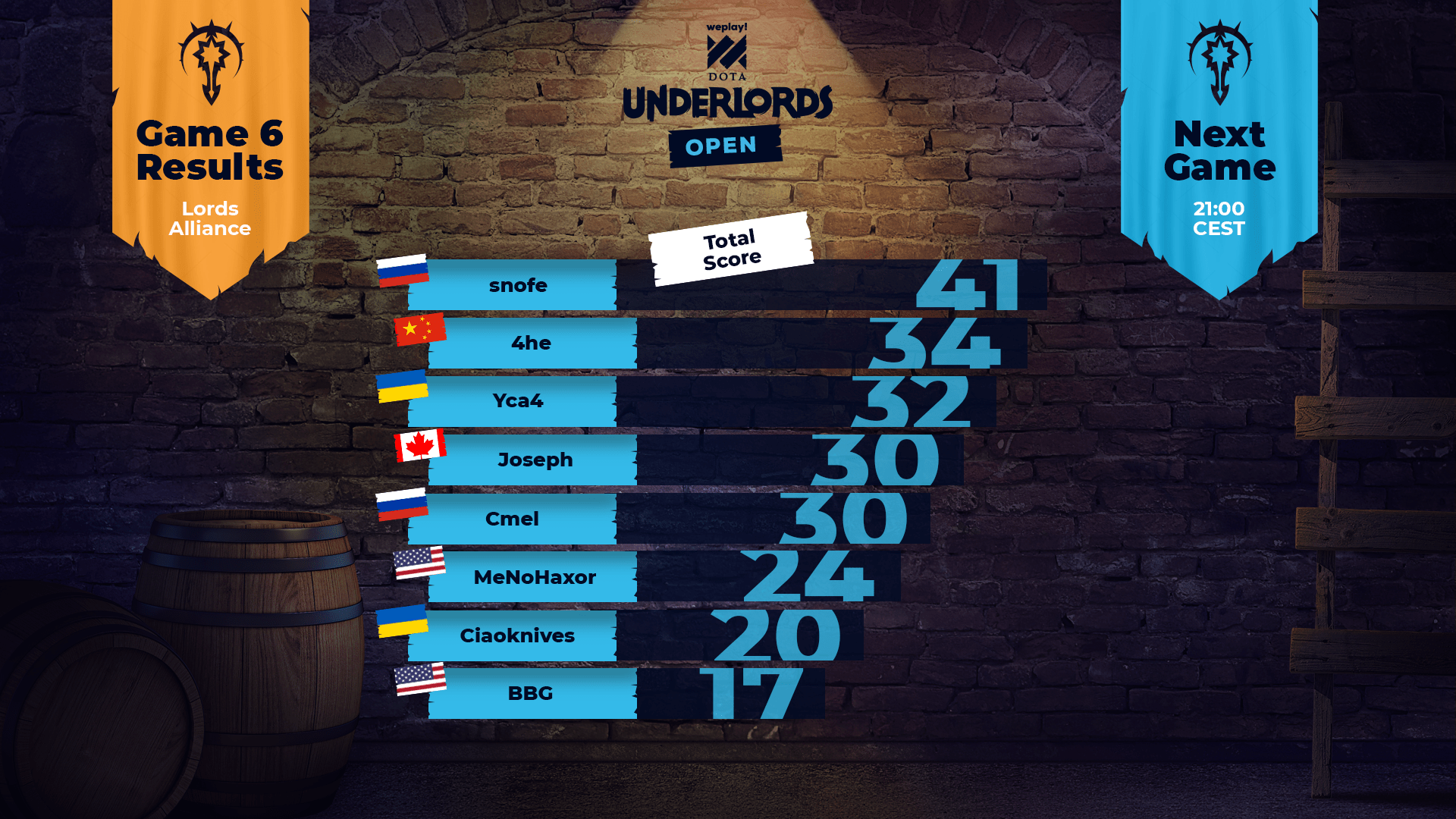 The most prominent Savage player of the tournament BBG highrolled Summoning Stone on the initial item rounds, which set him up for good game 7. MeNoXaxor had something to say about BBG's luck by scooping 2 two-star Venomancer on round 6, (he finished a three star Veno by level 19). The player was one of the first to leave the game, but by that time BBG curved into Warriors and Trolls. BBG finished the match with a two-star Troll Warlord.

Cmel had an interesting early midrange board with Primordials, a two-star Ogre Magi with BTC on SF.

Surprisingly enough, the game didn't have a single Knights players. 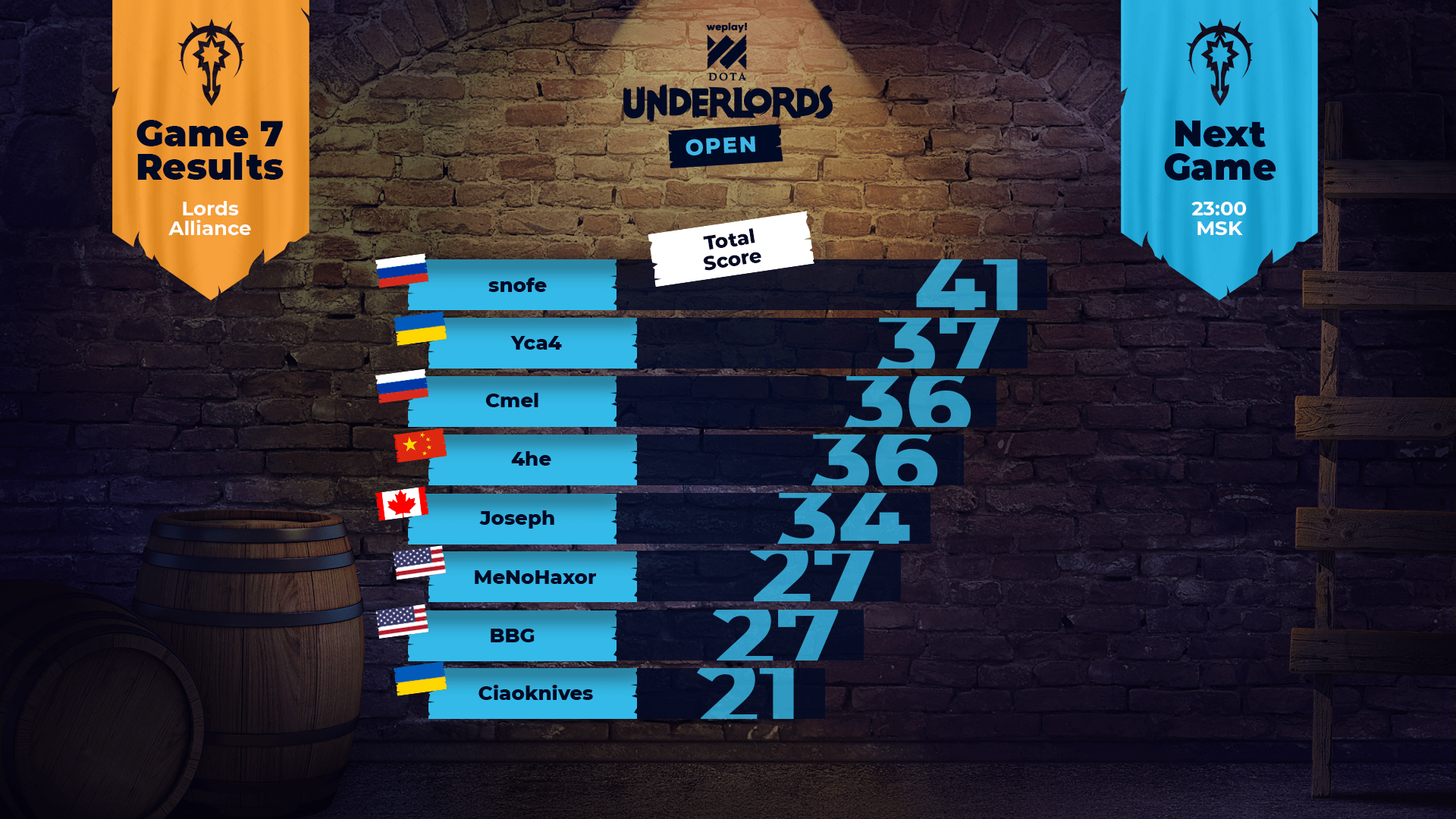 This time Snofe had two Summoning Stones which made his Eidalons really beefy and helped him survive till a two-star Arc Warden with 10 health. The Eidalons were the last standing units in more than one fight.

MeNoHaxor and BBG noticed that the Knights weren't contested during the previous game and started banking them early. BBG hit poorer rolls and got knocked down first.

Ysa4 chose an early Scrappy-Mages path though he knew it's the default strategy of 4he. The later deviated this game with a Warrior-Druid build focused on Savages and Hunters.

Joseph had an excellent early game with Demon Hunters-Druids-Savages.

Cmel emerged as a true contender around round 12 a strong Hunter-Warrior board with Heartles and Browny pockets. By round 16 his Axe rocked 21 kills. When he finished the 4-Brownies synergy, Cmel's units became absolute meat shields. 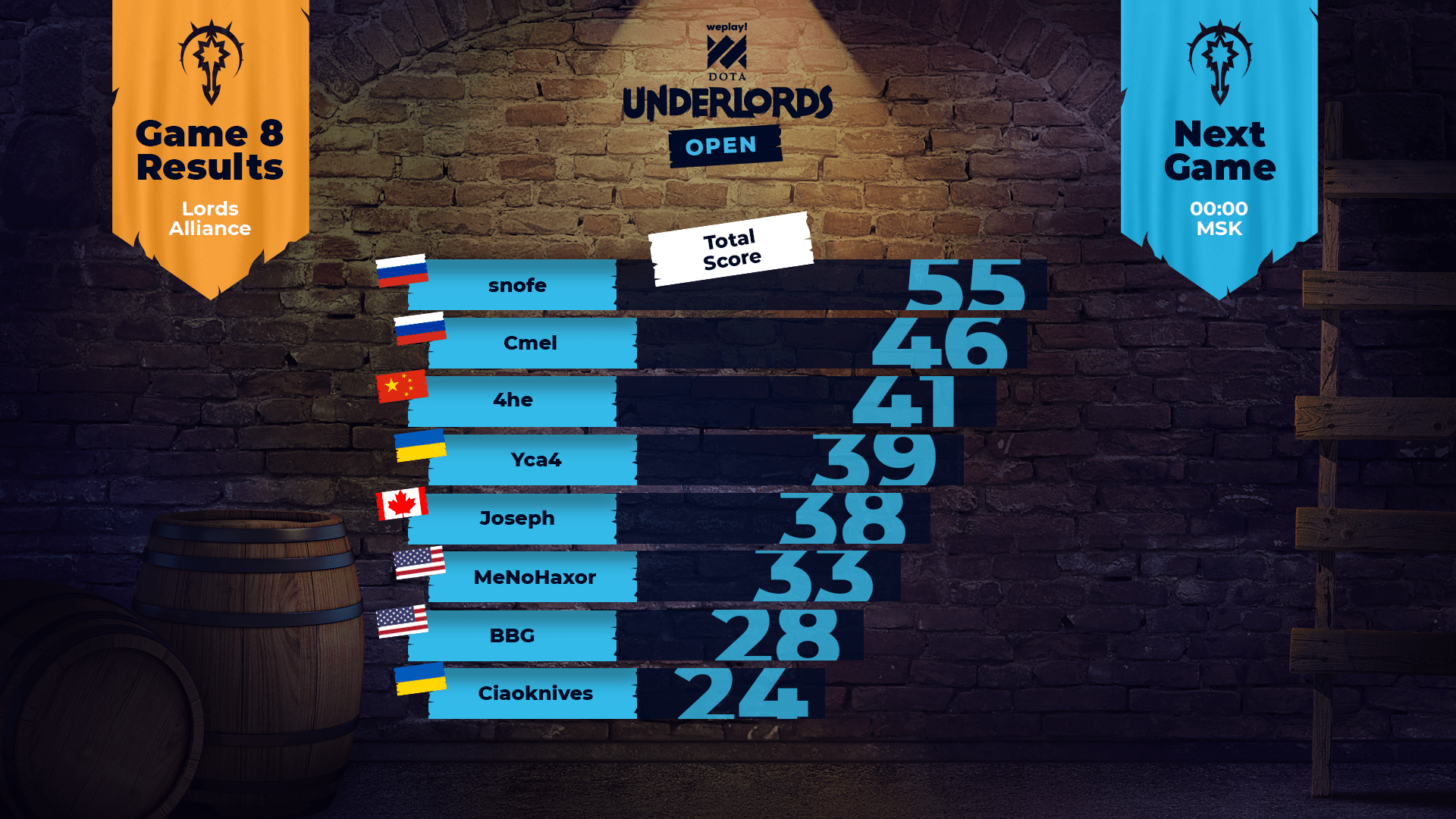 Both MeNoHaxor and BBG went to the mid-game very strong w/ several 2-stars units each.

Snofe had a rough early game while building Elusive. He stabilized around level 16 with level 7 and 6 Elfs. By round 25 Snofe essembled the 9 Elusives w/ 2 HP

Ciaoknives built an irregular Mages board with Mophling for Primordials splash and SF for additional damage. Around level 20 he finished a 3-star Luna and became a dangerous opponent. He hit a couple of strong boards and got knocked at level 26.

4he tried to build 6-Warrior board and had a decent early game. Around round 15 he quickly started losing HP and didn't survive till 25 creep round.

Ysa4 had an irregular board with 4 Savages, 3 Hunters, 2 Druids and two Naga-Warriors. He survived till level 3o by burning Aegis.

In the final standoff, MeNoHaxor brought buffed up Brownies vs Cmel's Knight board. Cmel had the upper hand and finished the game in the first place, 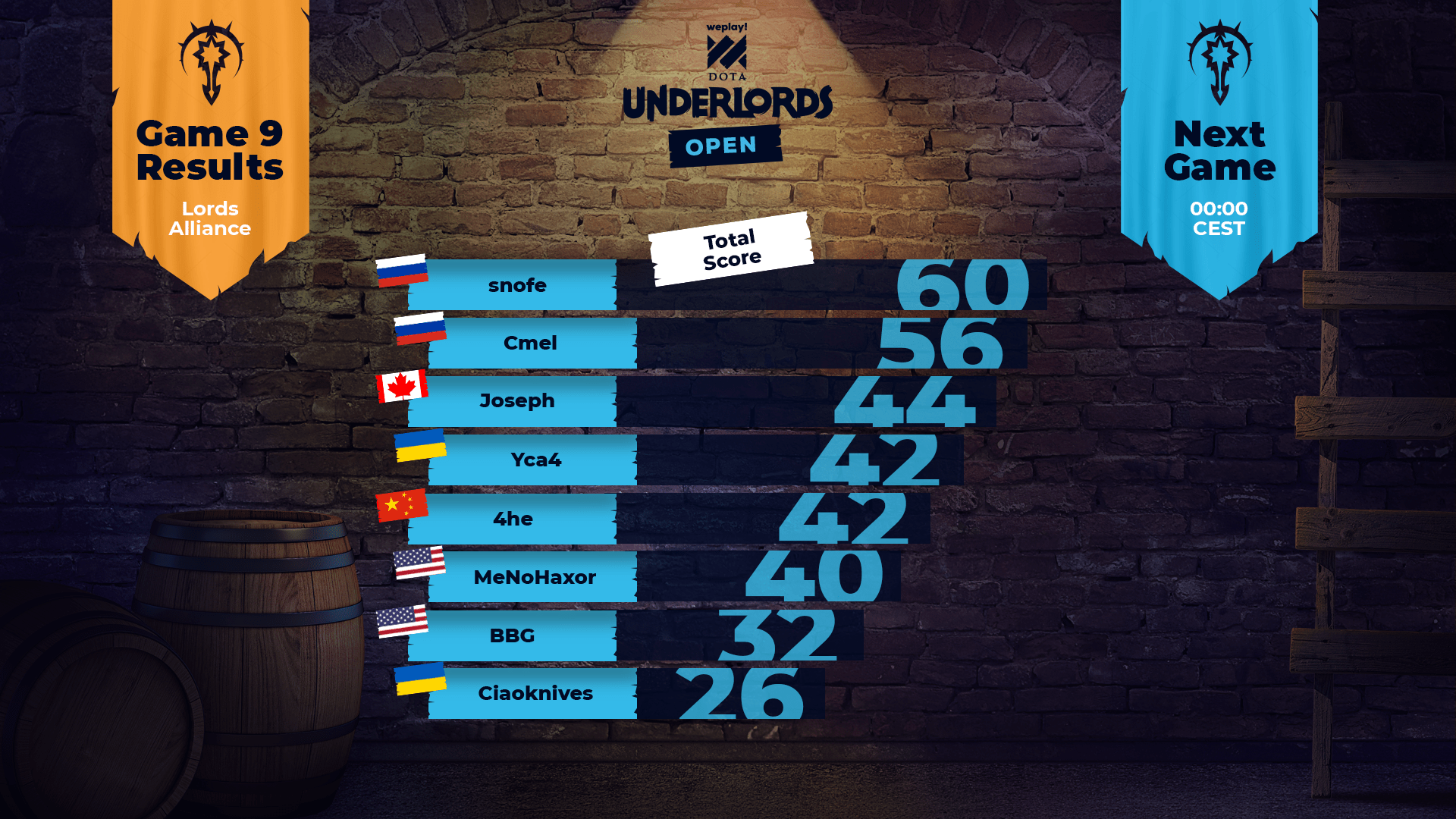 BBG had a great start to the final game with Assassins and double two-star Anti-Mage by round 15. He used the successful opening to curve into Demon Hunters and Scrappies. At round 18 BBG reached the natural end of a winstreak & acquired the top net worth.

Yca4 opened with a strong board formed by random two-star units which he than turned into Knights. By round 21 Yca4 picked 2 BTCs and set up a sacrificial mr Warlock.

MeNoHaxor risked a 6-Mages build but he couldn't find a two-star Kottle. He stabilized at very low health and eventually hit level 10 to get kicked out by MeNoHaxor at round 33.

Cmel built an unusual board with 4 Scrappies and assassins. He hit important upgrades by rolling down aggressively. At one point he had to lock the shop to finish three-star Slark.

Snofe built another one of his 1000 IQ builds with Mages, Assassins, Primordials and Dragons. At round 30, he was on a 5 win-streak and had top HP.

4he had a great run in this game with 4 Primordials including a two-star Arc Warden and 3 Mages.

In the final standoff, 4he knocked out Snofe to secure the third place and $1000.