The honour of opening our pink and fluffy WePlay! Dota 2 Valentine Madness went to Vega Squadron and The Final Tribe. The teams began to fight in the Upper Bracket and showed spectacular battle, especially on the second map. Debut became a success!

The Final Tribe relied on Faceless Void and Clinkz, backing up the draft with the control from Tusk and Slardar. Vega Squadron responded with a bunch of Lifestealer and Puck, as well as a support link - Jakiro and Sven.

The teams began the game carefully, trying to test each other’s defence and buying the necessary items. The value of the characters didn’t reveal the leader by the tenth minute. The score of the game also hesitated without a significant advantage to any team. “Sharks” were able to hold some successful fights closer to the mid-game, and forced the opponent to make a mistake after mistake. Vega Squadron quickly converted the immediate advantage into dangerous items and took the first map of the tournament.

Vega Squadron picked Anti-Mage and Chaos Knight as the basis, The Final Tribe showed Phantom Lancer and Tiny, and also surprised everybody by taking Enigma as the last pick.

The teams continued from the takedown position from the previous map - Vega Squadron rushed to crush their opponents, and The Final Tribe dug in their defence. The advantage of "Sharks" has grown to 5 thousand by the twentieth minute. However, TFT's strong AoE prevailed in the Roshpit, and the statistic from both teams matched. Vega Squadron responded with a full-fledged "team wipe" and destroyed the enemy’s central line. A series of mutual mistakes stretched the battle to 57 minutes when the “Sharks” made the next team kill and were able to destroy the opponent's Ancient finally. 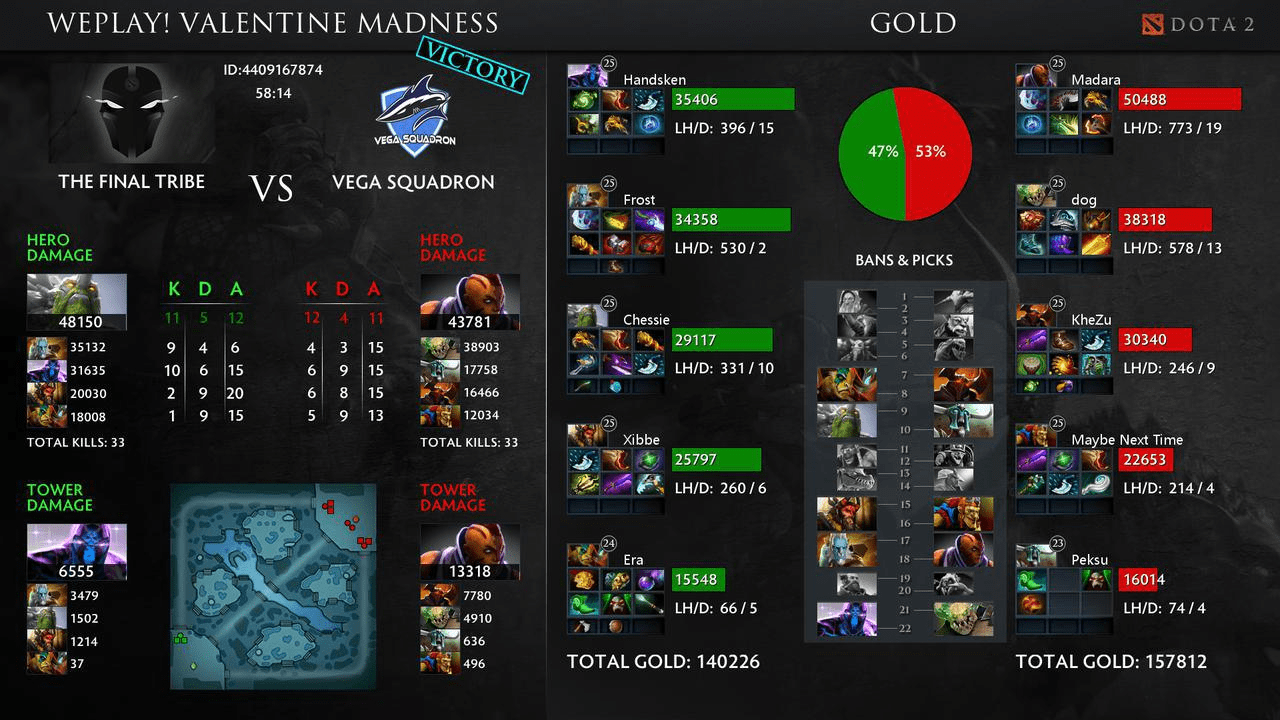 Vega Squadron went farther along the bracket to the game against Natus Vincere, and The Final Tribe has already spent one of three life units in the tournament.

Enjoy the next game between The ReaL DeaL and Pavaga!