In this guide, I will detail the available Heroic loot items for the Dwarf character in Warhammer Chaosbane.

This guide is for those that would like to know what possible gear drops they could get. You can even craft a build using the guide and then you'll know which Heroic items to keep an eye out for.

For convenience, the loot has been split into four categories; necklace, ring, weapon and armour sets.

There are 3 main heroic armour sets in the game. Each set consists of five parts, indicating the body area they protect. They are the head, chest, gloves, pants and boots.

Enemies afflicted with bleed have their speed reduced and damage received is over 100%. The Cleaver skill is also improved by not requiring skill points to equip it. This version (Heroic) of Cleaver does more damage than the Superior version and restores 3% of health with a 5-second cooldown.

This set increase rage damage bonuses and inflicts +80% damage. Like the Cleaver skill, Last Bastion does not require skill points to equip it. This Heroic benefits over the Mastered version is a 50% increase to health and energy gain.

This armour set boots all damage from fire skills and creates a burning aura which deals damage to enemies on contact. The lower player health gets, the more damage is done to enemies. The Call to Oath skill does not require skill points to equip and does +50% damage more damage than the Superior version and it's element becomes fire. So far there has been no indication that the effects of these rings stack. There are three items in this category.

Critical hits inflicted while wearing this ring have a 50% chance to reduce any existing cooldowns.

Critical hits with this ring grants the player a damage reduction buff of -20% for 3 seconds.

Critical hits while wearing this ring has a chance to grant 5% energy and 5% health.

This ring grants a 30% damage buff for 3 seconds after the player lands a critical hit.

There are three items within this category and it doesn't appear that they stack.

With this potion, players receive a counter-attack damage buff of +1,000 for 5 seconds.

Using a potion will grant players a damage buff of +30% for 5 seconds.

Pendant of the Rebel

This potion will bestow a damage reduction buff of -30% for 3 seconds. 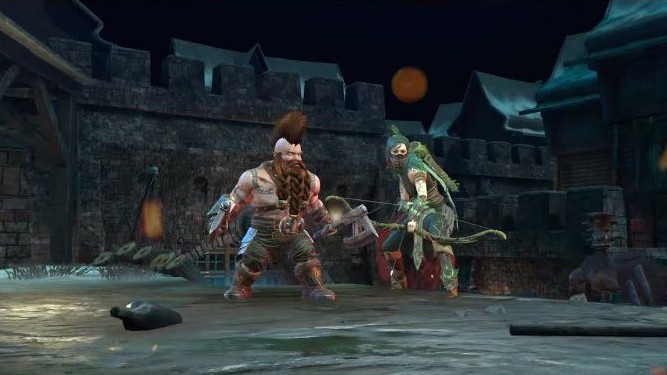 Just like in the case of rings, weapon buffs do not seem to stack.

Enemies afflicted with the stunned status will take 200% more damage from critical hits.

While in combat, player health is permanently lost, but critical hit damage is increased by 100%. Health regeneration takes a hit of up to -2569.

So long as players have received damage, the greater the damage they deal in return. The boost to damage is +5%.

If a player contributes damage to the death of a champion, this weapon will give 50% health and energy in return. The Impatient One will also reduce all present cooldowns.

Like with the Impatient One, if a player contributes damage to the death of a champion, they receive a 50% damage buff for 20 seconds.

Damage received when rage is active is increased by 20%. In return, players gain a 50% damage increase.

There you have it, all the Dwarf's Heroic loot items. Let me know if I missed any and good luck hunting for those who haven't gotten them yet.