The sneakers culture has entered one of the most intriguing eras of its history thanks to the increasing popularity of sports footwear among mass consumers. Partially, the reason behind growing interest is the result of collaborations between the manufacturers and famous brands/artists that are usually not related to the industry of sneakers production at all.

You might think that the trend has ignored the existence of video games, but that’s definitely not true. There’s a fair amount of official collaborations. Besides, some of them go back as far as the early 2000s.

However, there’s a common issue with such gaming-inspired official sneakers – manufacturers tend to minimalize the creative approach in order to receive quick profits thanks to the popularity of the main product. There’re some nice exceptions, though, and we’ll discuss the most intriguing ones below. 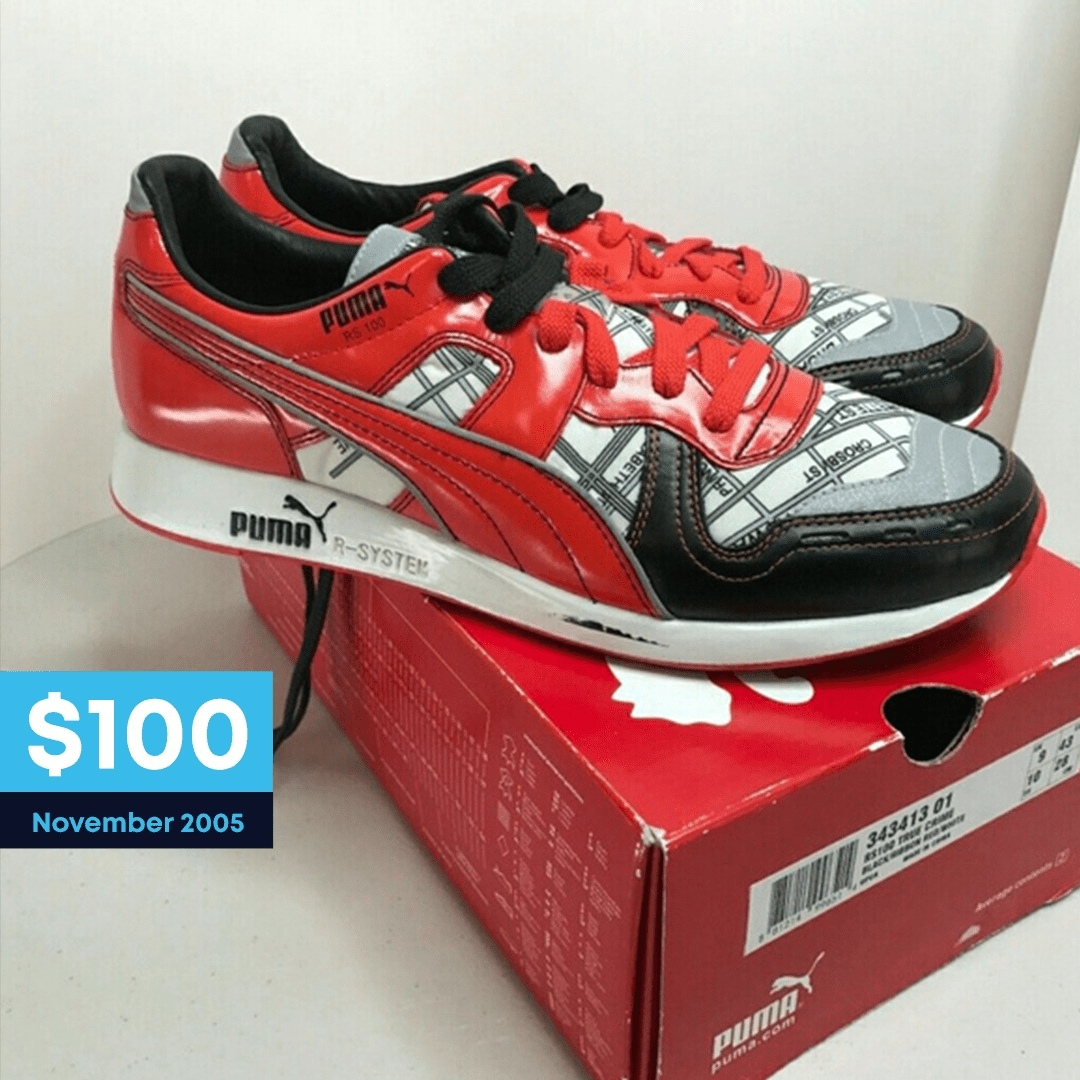 The True Crime series has been one of the most well-executed GTA-clones – the franchise managed to hit reasonable success in sales and was met with a warm reception from critics. Eventually, the ideas for the triquel turned into Sleeping Dogs, which was unable to become a successful franchise despite all the efforts of the publisher.

True Crime: New York City hit the store shelves back in 2005, and Activision signed a deal with Puma for joined efforts in the production of Puma RS-100 “True Crime” sneakers. There was a limited amount of pairs of these sneakers – only 250 were produced for selected New York stores.

The RS-100 model was chosen as the base for the collaboration due to its huge popularity, which started back in 1986 when the model was officially released. It was a huge hit – mainly due to its R-System shock-absorption technology and universal exterior.

The RS-100 “True Crime” version was made completely out of leather with glossy elements. For the main picture, the real map of Manhattan was chosen, while the back was decorated with a minimalistic True Crime logo.

The sneakers were also featured in the game itself as a reward for collecting items during a side quest. Today, it’s impossible to purchase yourself a pair of these as the model wasn’t a hit among resellers. Perhaps, only serious collectors might have some of these sneakers left. 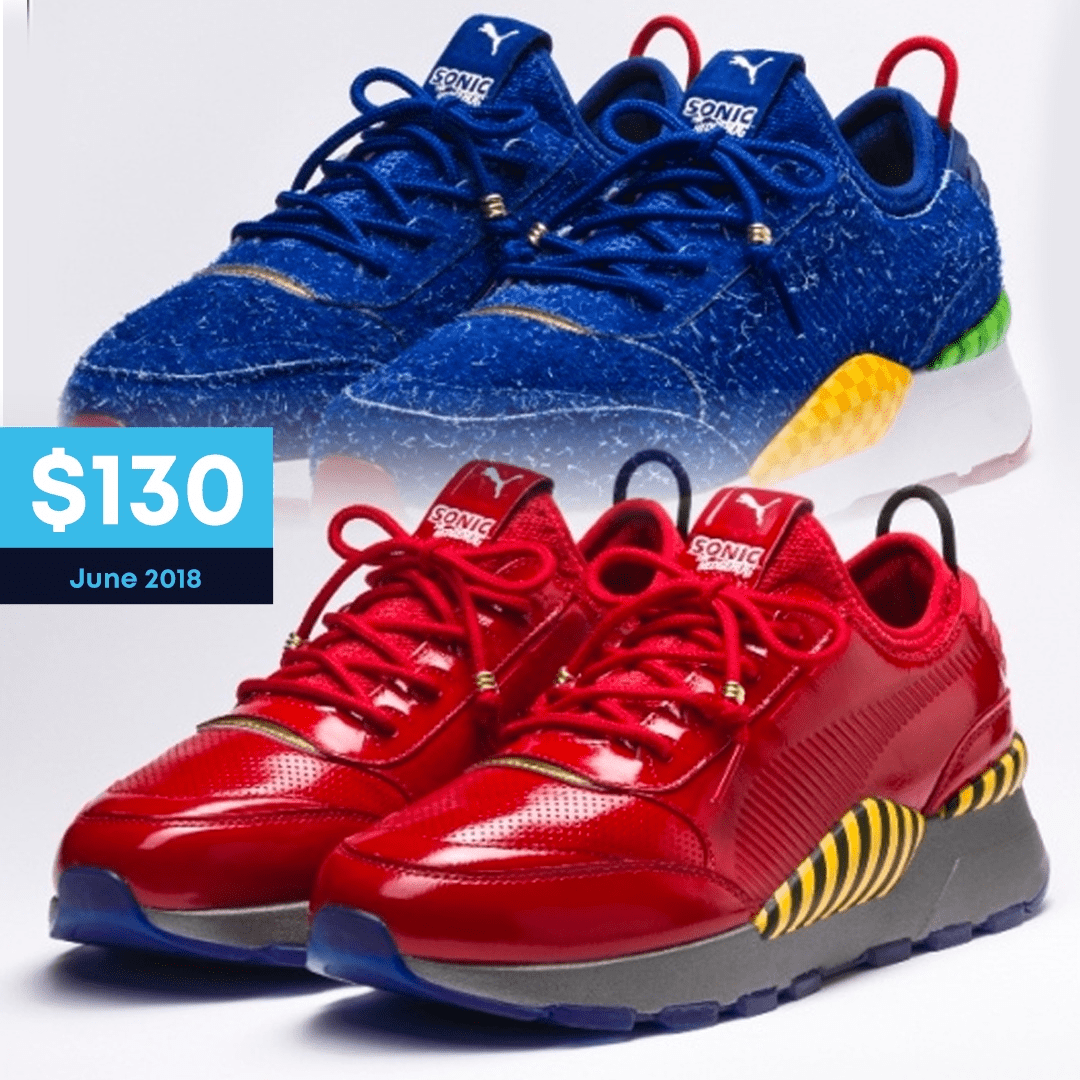 Nowadays, Puma is trying to reanimate the iconic silhouettes from the RS sneakers lane. Korean brand Ader Error has already contributed to it, and Sega was another company to produce its own themed version of sneakers based on Sonic and Dr. Eggman.

Puma x Sega RS-0 “Sonic” is made out of fleecy blue suede with coloured elements that serve as a reference to the Green Hill Zone area. The “Dr. Eggman” version is made out of polished leather coloured in accordance with the signature vehicle of the villain.

Puma has recently announced its plans for a multiyear partnership with the esports organization Cloud9, and the company is not only producing the uniform for the players now but is also planning to reveal the lane of official merch by September 2019. A Tetris-themed version of Puma RS-X sneakers is also expected during that period. 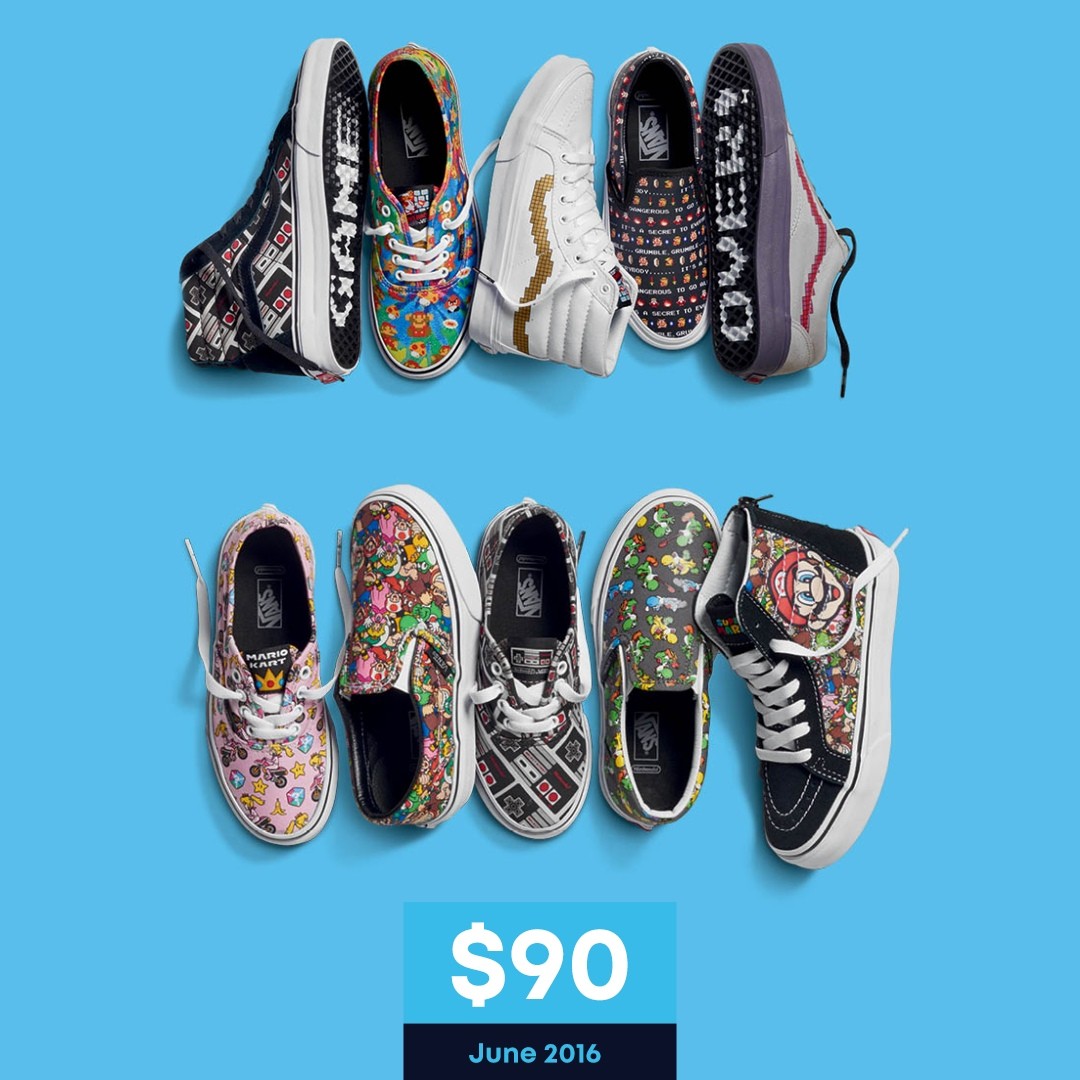 Resale price: close to the retail one

Together with Vans, Nintendo offered four colour variants of Authentic, two Sk-8 Hi models and two reworks of Old Skool. Each of these designs is dedicated to either one of the key franchises by the Japanese company (Donkey Kong, The Legend of Zelda, Duck Hunt, Super Mario Bros.) or to the iconic Nintendo Entertainment System console. The collection was also backed up with a series of sneakers created specifically for children. That particular lane consisted of Sk8-Hi Zip, Classic Slip-on, and Authentic models with characters from Mario Kart and Super Mario drawn on them. 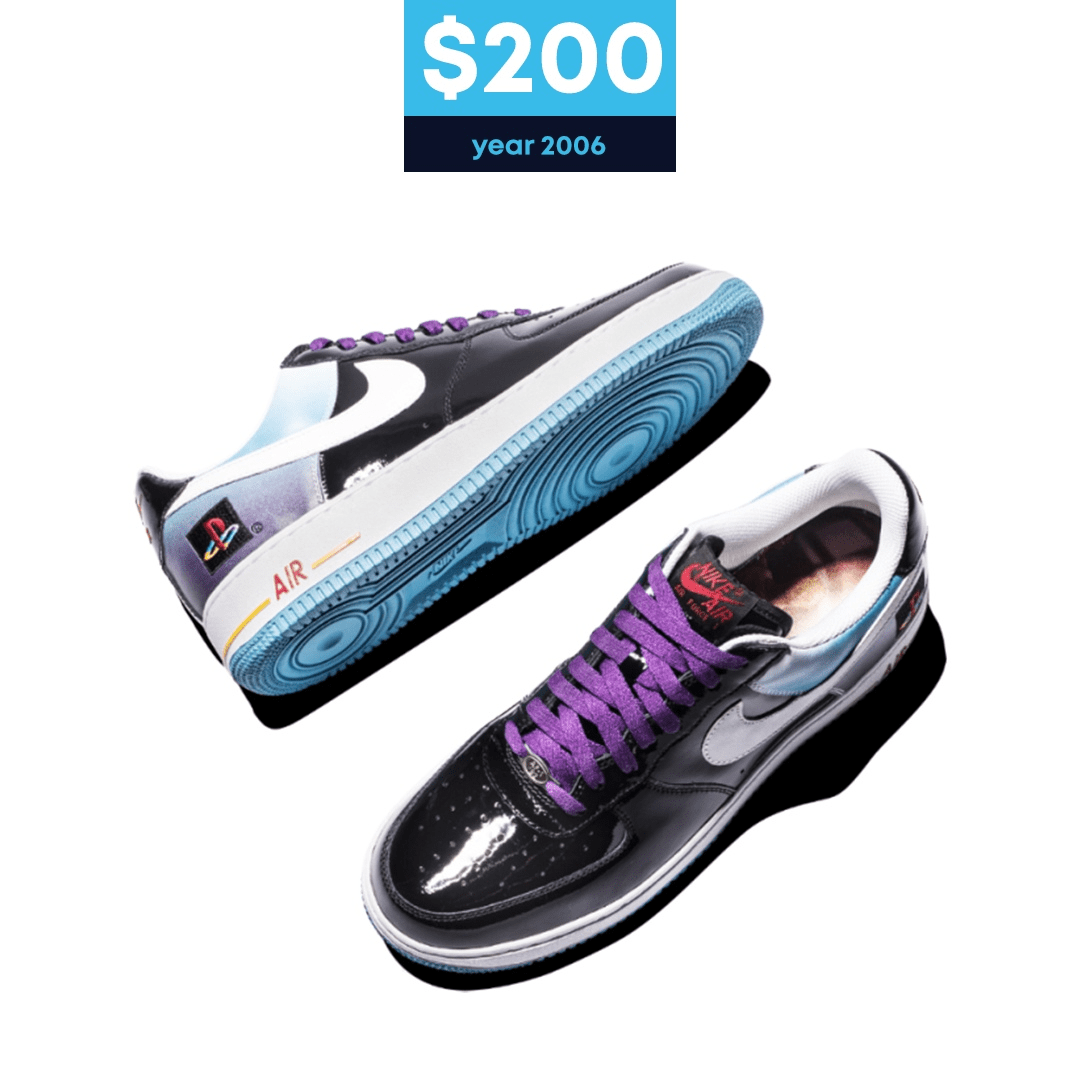 The first collaboration between Nike and PlayStation happened back in 2006. The pair in question was offered to specific people who had a direct relationship with the Japanese company – in other words, the sneakers were received by the employees and their families.

The scarcity led to incredibly high resale prices on the secondary market – you now have to give away well above $2,000 to secure yourself a pair. Luckily, 12 years later, both companies met again for another collaboration after the demand became clearly obvious. 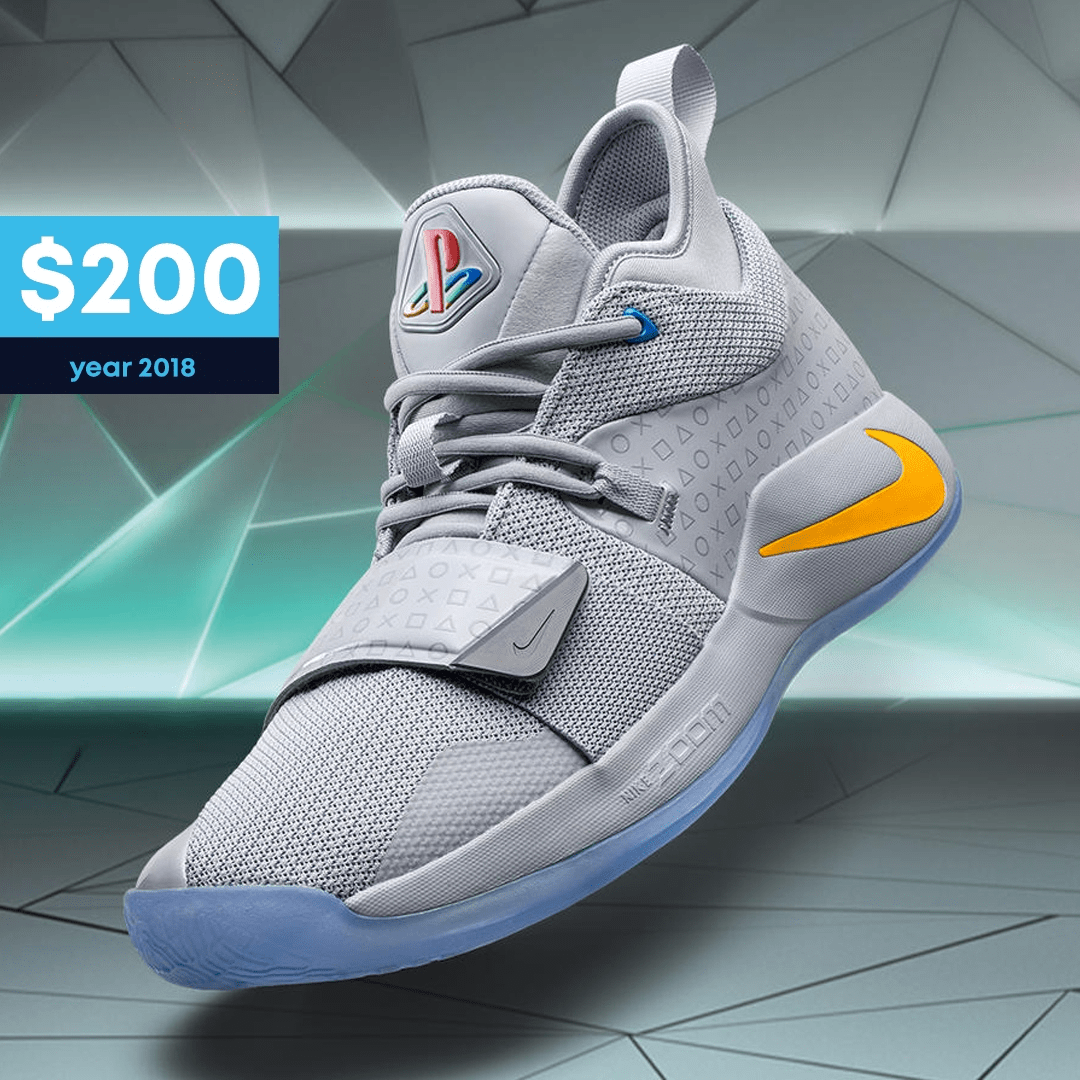 This collaboration was based on Nike PG 2, Nike PG 2.5, and Nike Air Force 1 models. The key feature of the former one was the built-in set of LEDs used to highlight the logos of PlayStation and Paul George lane (dedicated to the NBA star from Oklahoma City Thunder).

The product was met with great excitement and occupied a well-deserved niche on the resale market. Eventually, the sneakers were re-released three times in various colourings based on PG 2.5 model. A bit later, the iconic Air Force 1 also featured a similar pattern.

The design draws its inspiration from – and reminds of – the nostalgic era of PlayStation One thanks to branding, LED-elements, and the usual colours of home consoles by Sony. Both companies have expressed their satisfaction over this experience and hinted at a possible future reunion. 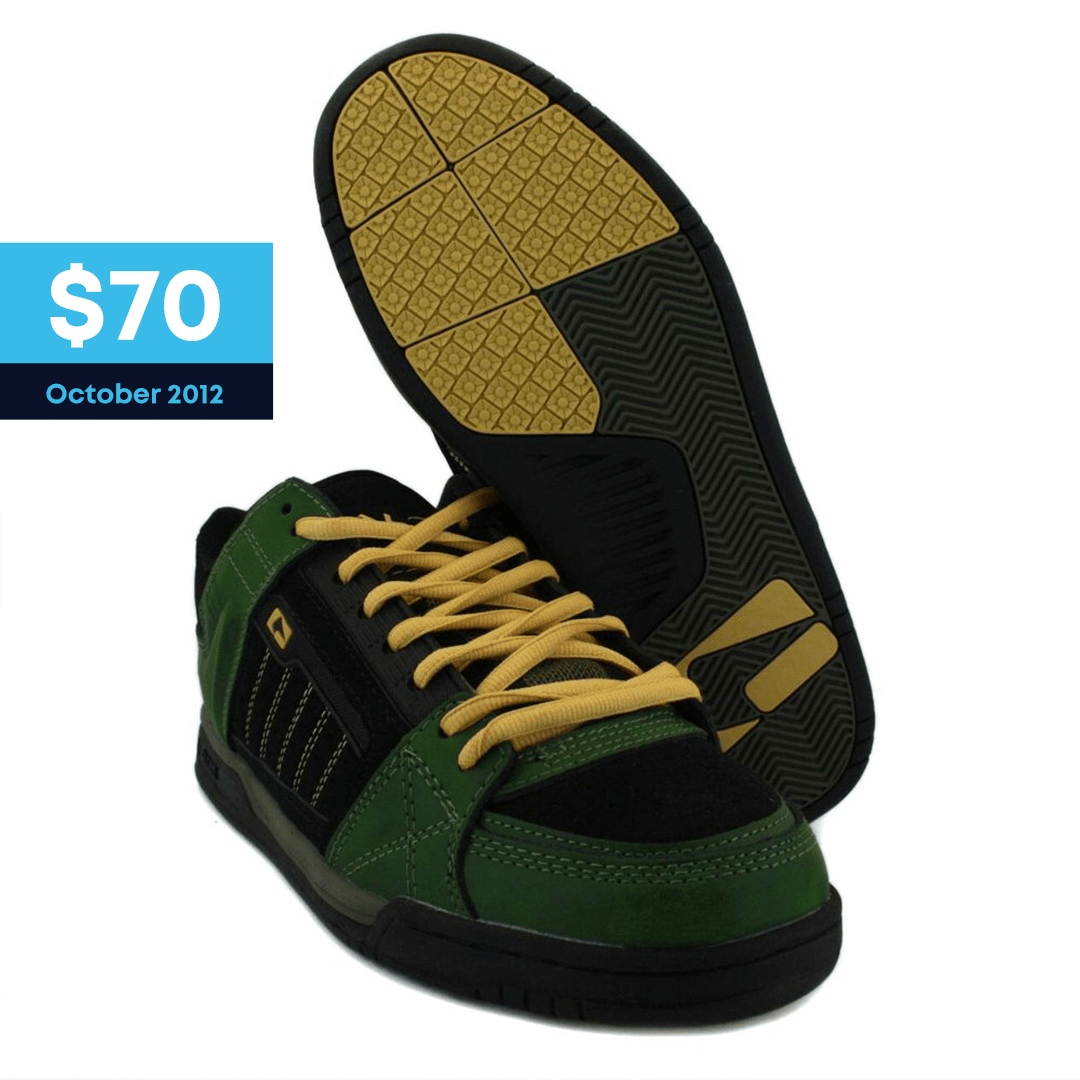 In 2012, just before Halo 4 was released, Microsoft collaborated with a niche skating brand Globe to create a promotional product based on Liberty – the most popular pair by the manufacturer. The sneakers were made out of genuine leather coloured in the style of Master Chief’s armour and UNSC organization.

The pair didn’t manage to become a huge hit on the resale market, and you can still purchase it for a price close to the initial one. 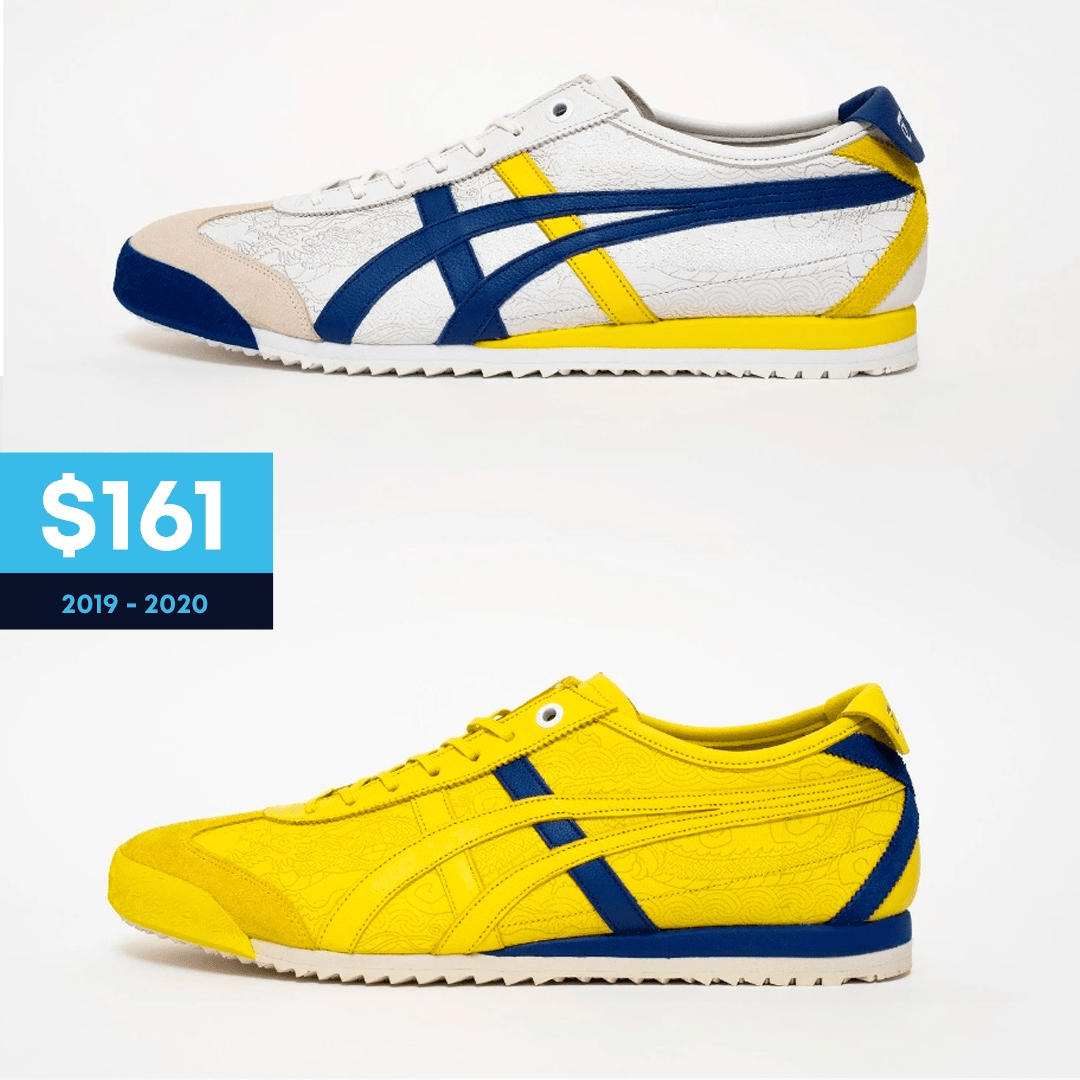 The Japanese division of Capcom has officially revealed its latest collaboration with the Onitsuka Tiger brand famous for its sportswear and sneakers. The products will be based on the classic Mexico 66 SD pair, which has once heavily influenced the development of footwear by Nike and Reebok.

The companies have planned to release two colouring variants, each of which will feature Street Fighter and Onitsuka Tiger logos at the back. The planned amount of pairs to produce is 5,000 units, although it is yet to be clarified whether it is per variant or the total number. Each box will have a digital download code for the owners to receive additional exclusive suit for Street Fighter 5. The exact premiere date is still unknown. 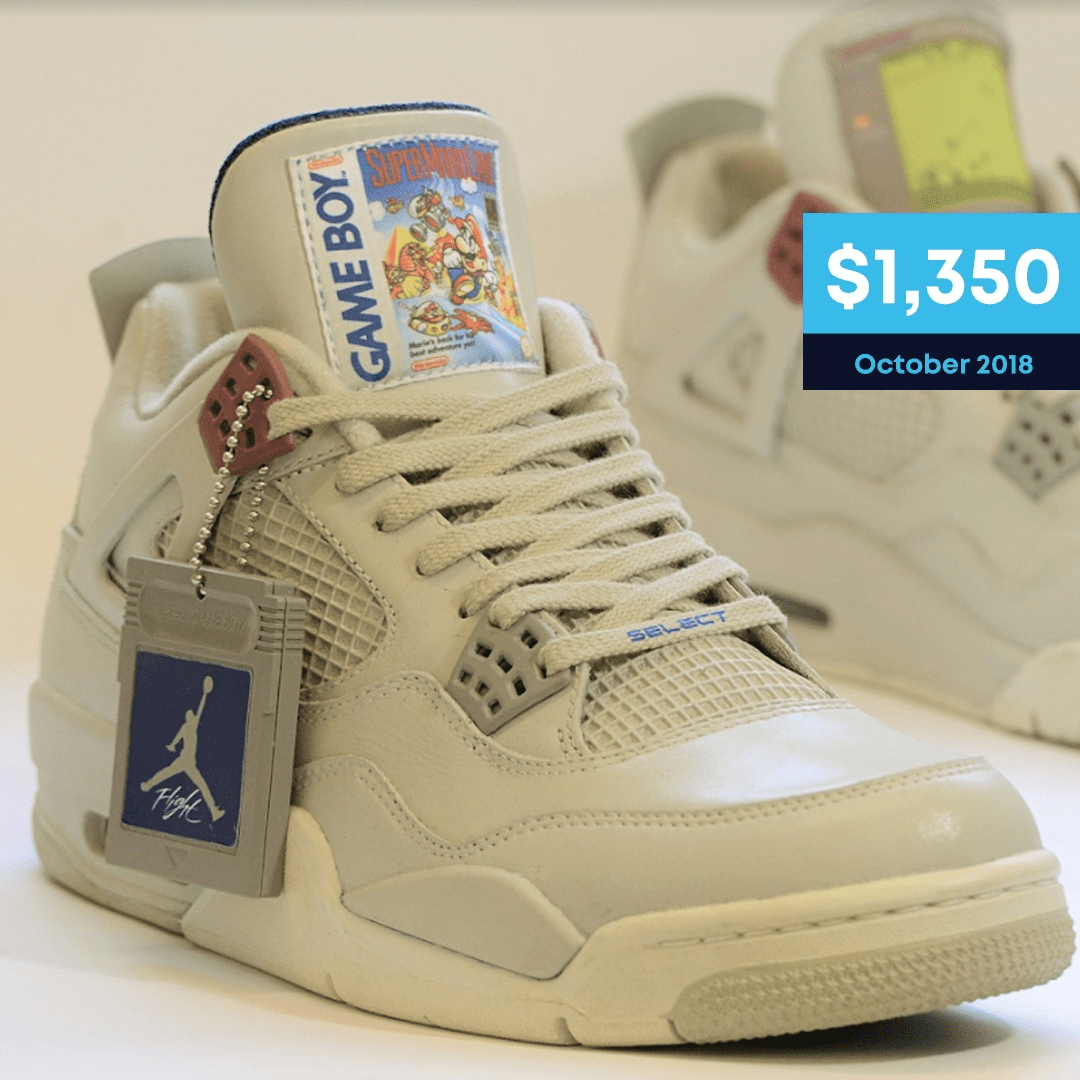 We’ve deliberately featured the official collaborations instead of fan works, but we can’t simply miss this particular release. The creator of the pair in question is Johnny Barry who owns the Sneaker Freaker store famous for producing limited amounts of customized sneakers.

As the foundation to base the lane of retro-games-inspired sneakers on, Barry chose Jordan IV – and it wasn’t a random decision. The pair has not only regained its popularity recently (the model was chosen by Kaws, Levi’s, Drake, Travis Scott, and Eminem for collaborations with Jordan) but also initially premiered back in 1989 – the year when Nintendo released the original Game Boy.

Both left and right backs of the sneakers have built-in d-pads and buttons while the tongues are designed to match the Super Mario Land box and an LCD. A real cartridge for the portable console was used to produce the alternate label.

Unfortunately, only 10 pairs were produced. Even with the strongest desire, you won’t be able to purchase one for yourself now.