Victory-focused strats by snofe – how to win an Underlords tourney

Victory-focused strats by snofe – how to win an Underlords tourney ⚡⚡⚡ Esports and gaming news, analytics, reviews on WePlay! The latest news on WePlay!

Our very first Dota Underlords tournament called WePlay! Dota Underlords Open wrapped up over the weekend, and we’ve already talked to the winner Rival “snofe” Daminov in a thorough interview. Now, the time has come to focus on his strategies – many of those who watched the event might be willing to know how to build a victorious team of Dota Underlords heroes.

To eventually win, Rival actually starts with a lose streak trying to upgrade Tiny, Razor, and Morphling as much as he possibly can. The very first level up appears only in the 13th round. By the end of the game, the winning team by snofe looks like that: 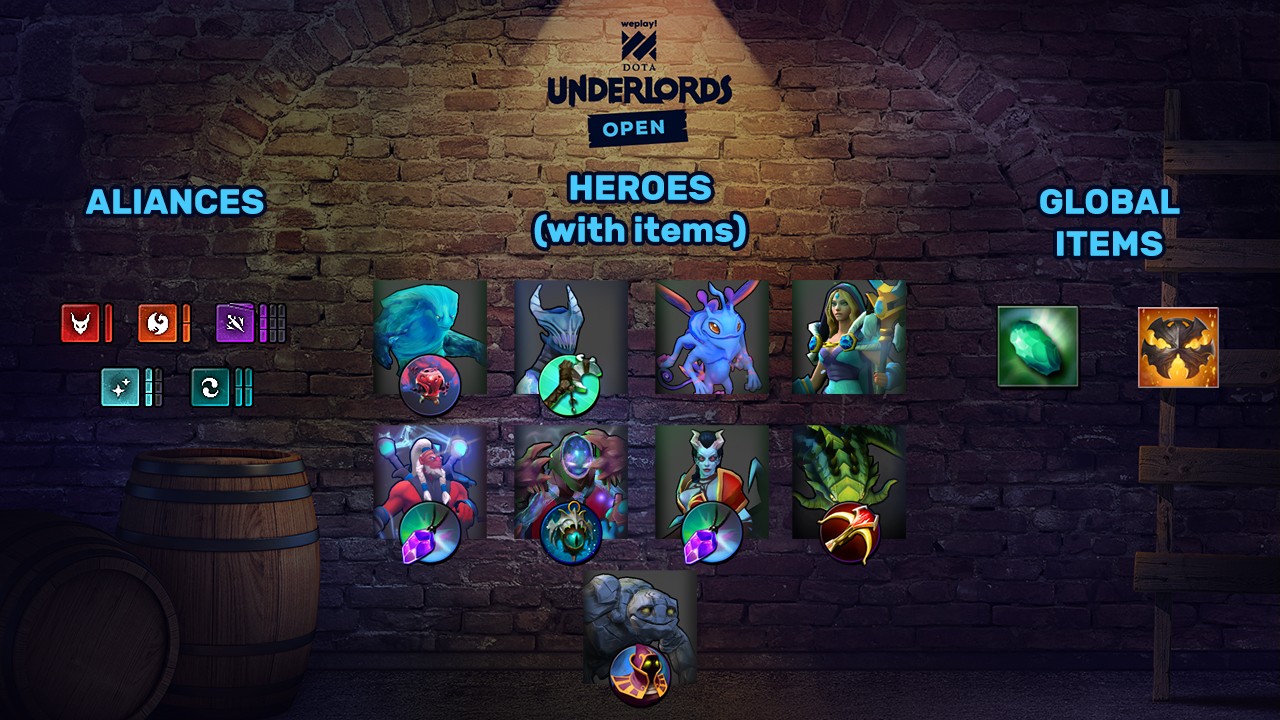 The major damage dealers of the line-up are Morphling and Queen of Pain. The absolute best item to equip Morph with is Octarine Essence – but in case there isn’t one, Blink Dagger would work almost just as good. For Arc Warden, Skull Basher/Maelstrom is a great choice at the beginning – you might eventually replace the chosen item with Daedalus/Eye of Skadi/Moon Shard.

Tier 3 Puck also works greatly with Octarine Essence. Interestingly, the OP item Aegis of the immortal is not necessarily a must-have pick for the team – there might be something a lot more valuable when you get to choose one of the offered items. For instance, snofe won’t ever pick it over Dagger or Summoning Stone. It goes without saying that you have to alter the item allocation slightly based on your inventory. As for writing a proper guide based on the line-up, snofe doesn’t really know how to start with as he feels it is hard to give a piece of working advice:

Some people make a few pages long guides easily, I’m not as good at it.

His go-to strategy for the first three rounds includes finding Brooch of the Martyr, Blink Dagger, and Summoning Stone – although it mostly relies on luck and RNG. Obviously, the economy plays a huge role. By the start of the 16th round, snofe usually tries to gather a team consisting of Tier 2 Morphling, Puck, Razor, Tiny, Queen of Pain, and Crystal Maiden. He sometimes picks Lina at the beginning – only to replace her with CM afterwards.

Generally, it was an irreplaceable strategy for a few games in a row for snofe, although in the 9th game of the finals, he tried a different approach. He managed to find and pick an early Shadow Fiend, who was used to effectively replace Queen of Pain. Rival decided to not invest in Tier 3 Tiny and Razor but rather focus on levelling up. This is a vivid example of building a winning strategy on the go – unlike having a predetermined pattern for each case.

Additionally, here’s the list of Alliances shofe favours the most – along with possible synergies between the heroes.

The separate column of so-called “Flex shot” heroes represents the small pool of characters, which are most powerful when used to enhance the synergy on the board – or at times when they can be situationally strong.

In conclusion, we believe that some of the snofe’s tips might help you getting better at the game as well as having a deeper understanding of how Dota Underlords actually works. Maybe, the next winner of a WePlay! tournament is reading this very text right now. Who knows?