WePlay! Tug of War: Dire gave us another day of confrontation - the teams played four battles in two parallel brackets with the vigorous comments of our talents. If you missed the matches due to excessive business (and you simply have no other excuse), then keep our detailed recap, which shows all the critical moments of the battles. 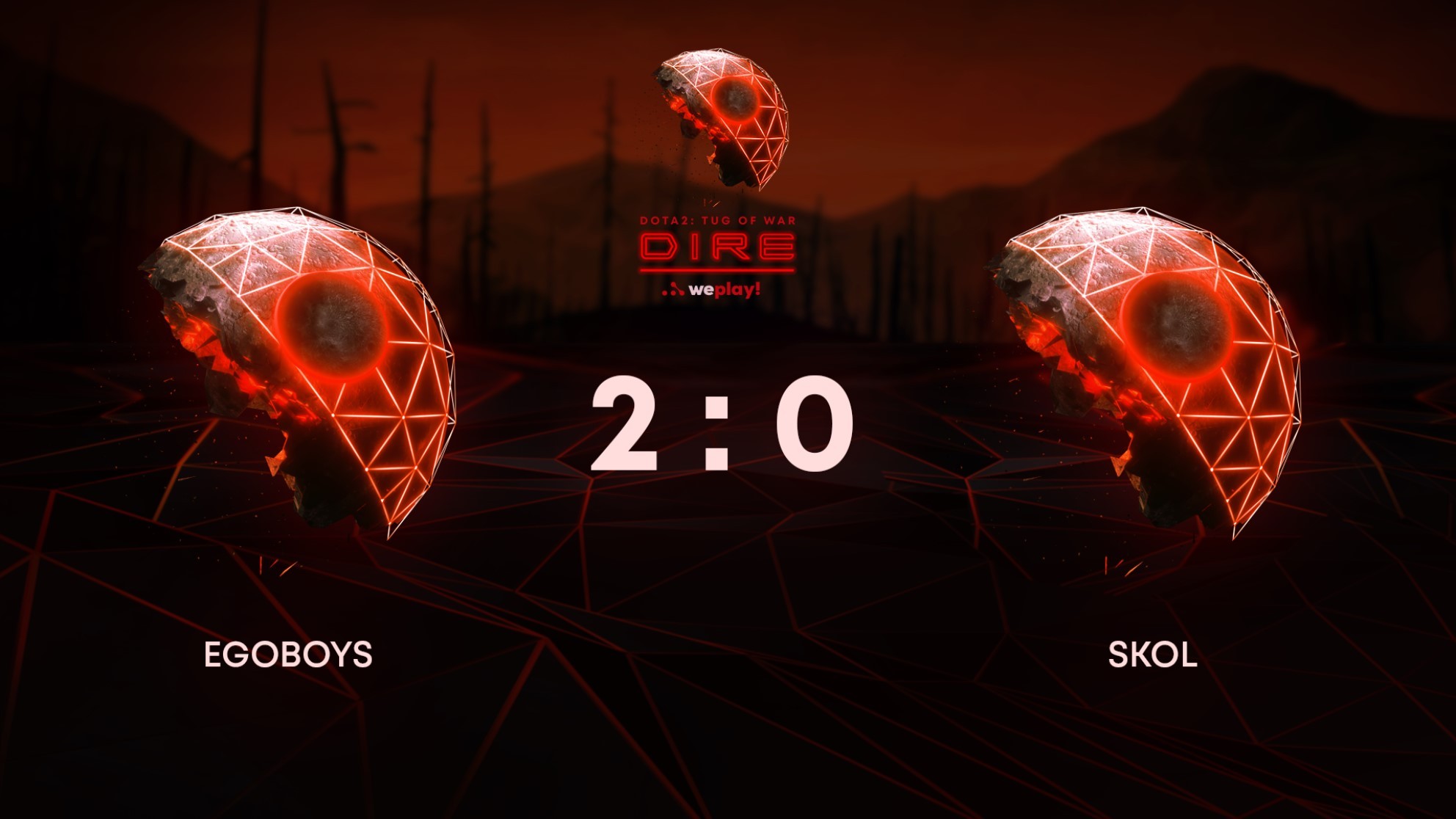 The second game day started with a pair of EgoBoys — S.K.O.L. Despite the presence of an experienced Duster in the roster, S.K.O.L. couldn't oppose the enemy with anything but laudable, but the ineffective will to win. Both maps went with EgoBoys one-sided domination. The carry of the team, Timado, was on fire: Sven took the advantage over the enemy Juggernaut. Anti-Mage left no stone unturned either from mider Ember Spirit or from hard carry Terrorblade - why do you need Sunder, if you don't have enough mana for it?

The first map ended in 25 minutes, and the second result was clear even earlier. Although it is worth paying tribute to the S.K.O.L. players - they were able to continue the already lost map for another 11 minutes.

The result is 2:0 in favor of EgoBoys, and the team went further the tournament bracket, where the invited Pain Gaming team waits for them in semifinals.

Fighters from S.K.O.L. left WePlay! Tug of War: Dire. Statistics of the main anti-hero of the match will tell you why: 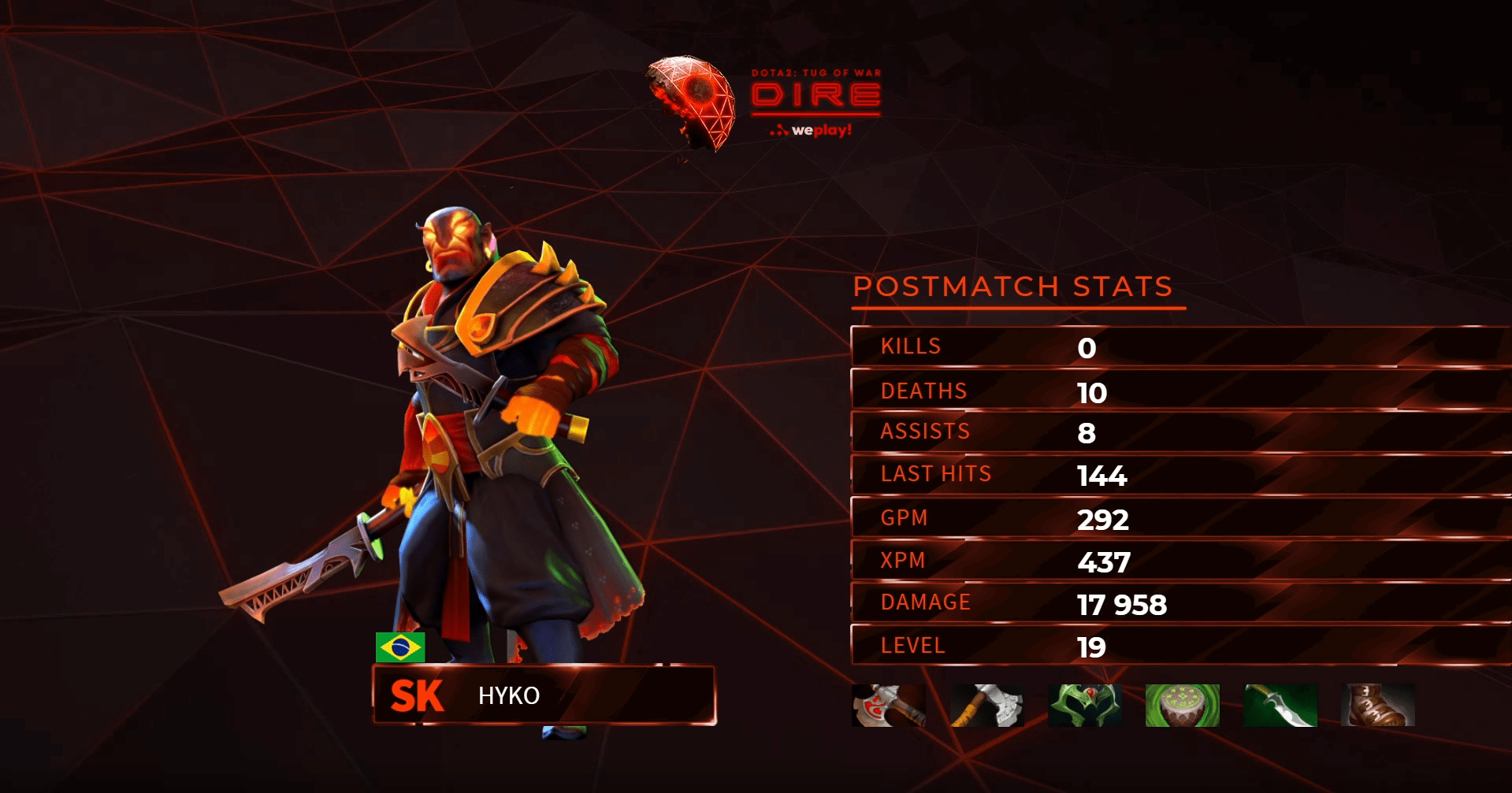 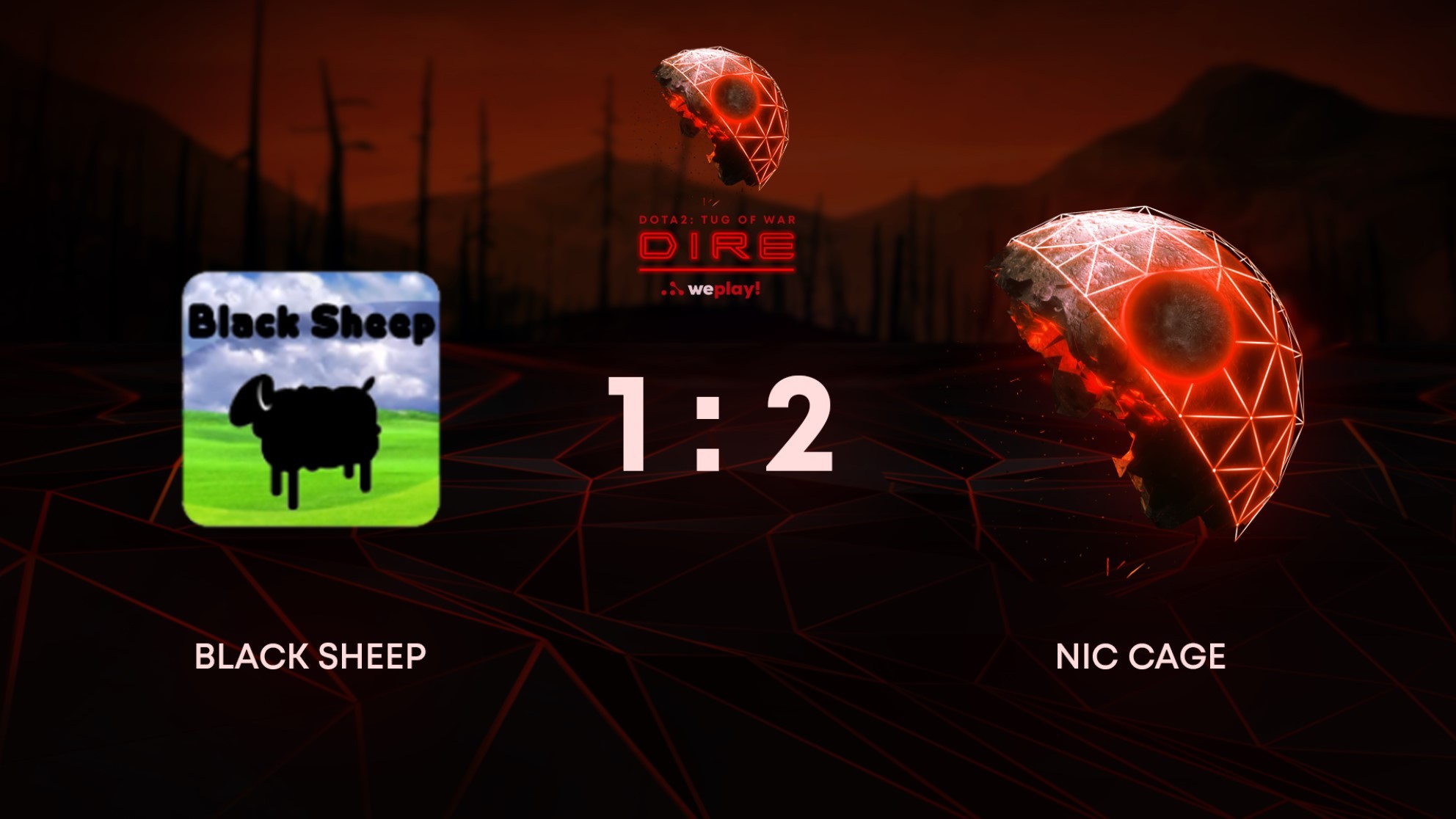 The teams of North America supported the meta, set by their southern neighbors - Arc Warden with Pangolier (Black Sheep) and Ember Spirit with Juggernaut (Nic Cage) appeared on the first map.

Black Sheep sat down in deep defence to give the necessary space of Arc Warden. And the bet was right. Nature's Prophet helped to create a full-fledged comeback, destroying enemy creeps at the critical moment and activating the backdoor mechanics. Nic Cage was broken near the opponent's impregnable throne, and there were no buybacks from the main characters.

The second map began with poaching creeps between Chen and Enchantress. Storm got to Bloodstone in the middle of the game and became almost elusive: his active participation in the clashes on the map blocked any Cage initiative. Phantom Assassin came to the rescue, gathered BKB and Manta Style: its crits helped the team to endure the pressure, make mega creeps and transfer the standoff to the third map.

Mars and Warlock migrated to the decisive battle, and meta Ember Spirit appeared. All three characters were in the Black Sheep roster, and they immediately became the analysts' preferences. After the exchange of comebacks, the teams didn't start rebuilding into a cautious academic DotA and continued to work in contact style.

Nic Cage, contrary to analytical predictions, seized the advantage and quickly converted it into items. The result was the fall of enemy barracks in the 18th minute and the white flag thrown out by Black Sheep. Spectacular series ended with the score 2:1. Nic Cage went further the bracket to EternaLEnVy, and Black Sheep got an excellent experience and material for analysis. 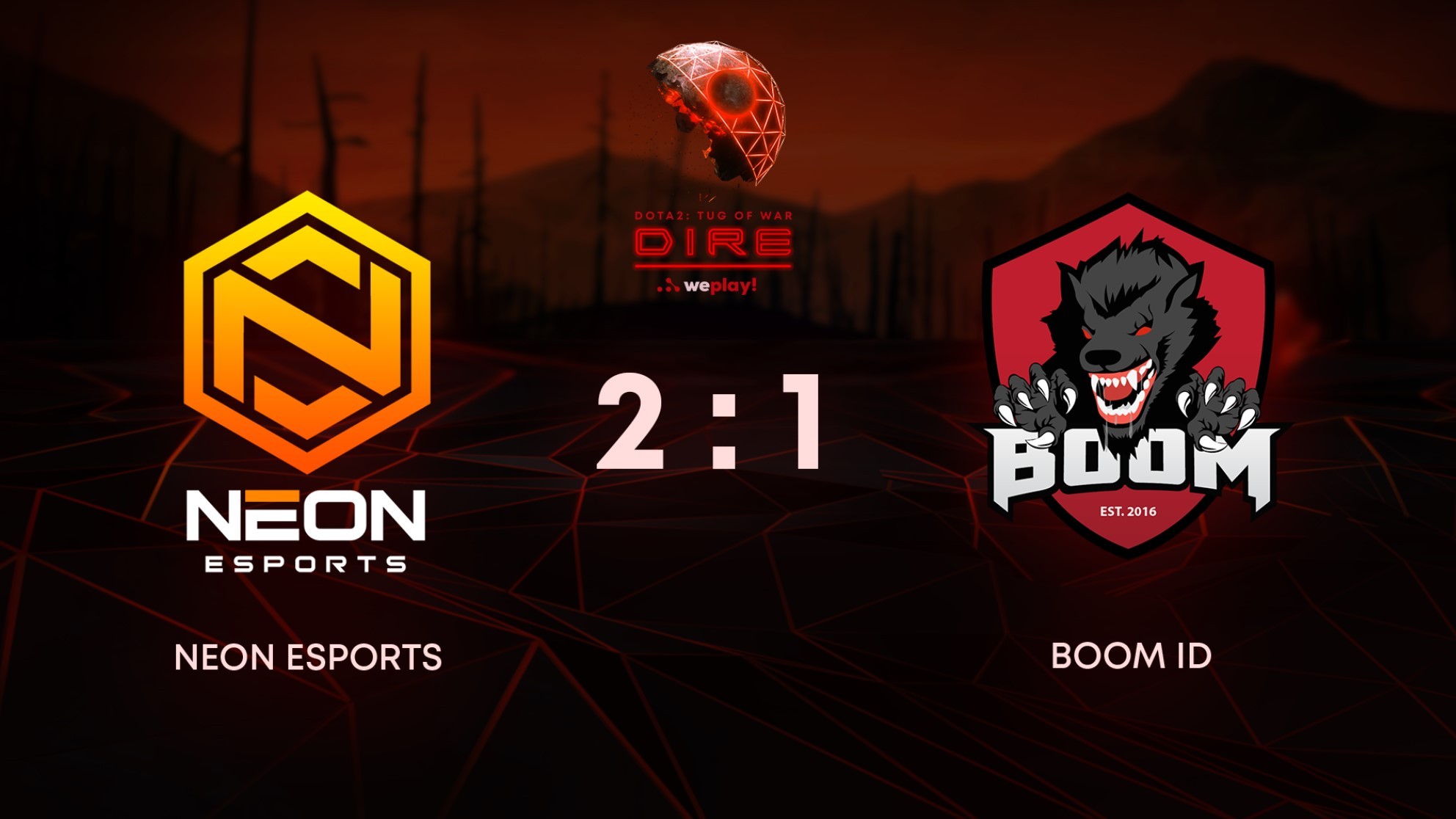 BOOM ID and Neon Esports became the second Asian couple of the day. It is noteworthy that the first two maps BOOM ID played with a stand-in - the team carry Dreamocel had problems (taking his performance on the third map into account, it would be better if he didn't return at all).

Ember Spirit on the midlane won an early game for Neon Esports and made a good start. But Sand King and Morphling helped BOOM ID get back into the fight and take the initiative. To a half-hour mark, the team was able to push the lines, pick up Roshan and enter the mid, destroying the central towers of the enemy. BKB from Morphling was the last nail in the Neon Esports coffin and BOOM ID led in the series.

Neon Esports was inches away from elimination and were forced to make a comeback to stay in the tournament. Ironically, the following two maps were held in the same scenario - BOOM ID won the early game, and they dominate the midgame. Then they made several critical mistakes by the 30-35 minute and lost the throne. Naga Siren with Butterfly and Wraith King with Radiance performed by Neon Esports were stronger than Spectre and Troll Warlord from BOOM ID. 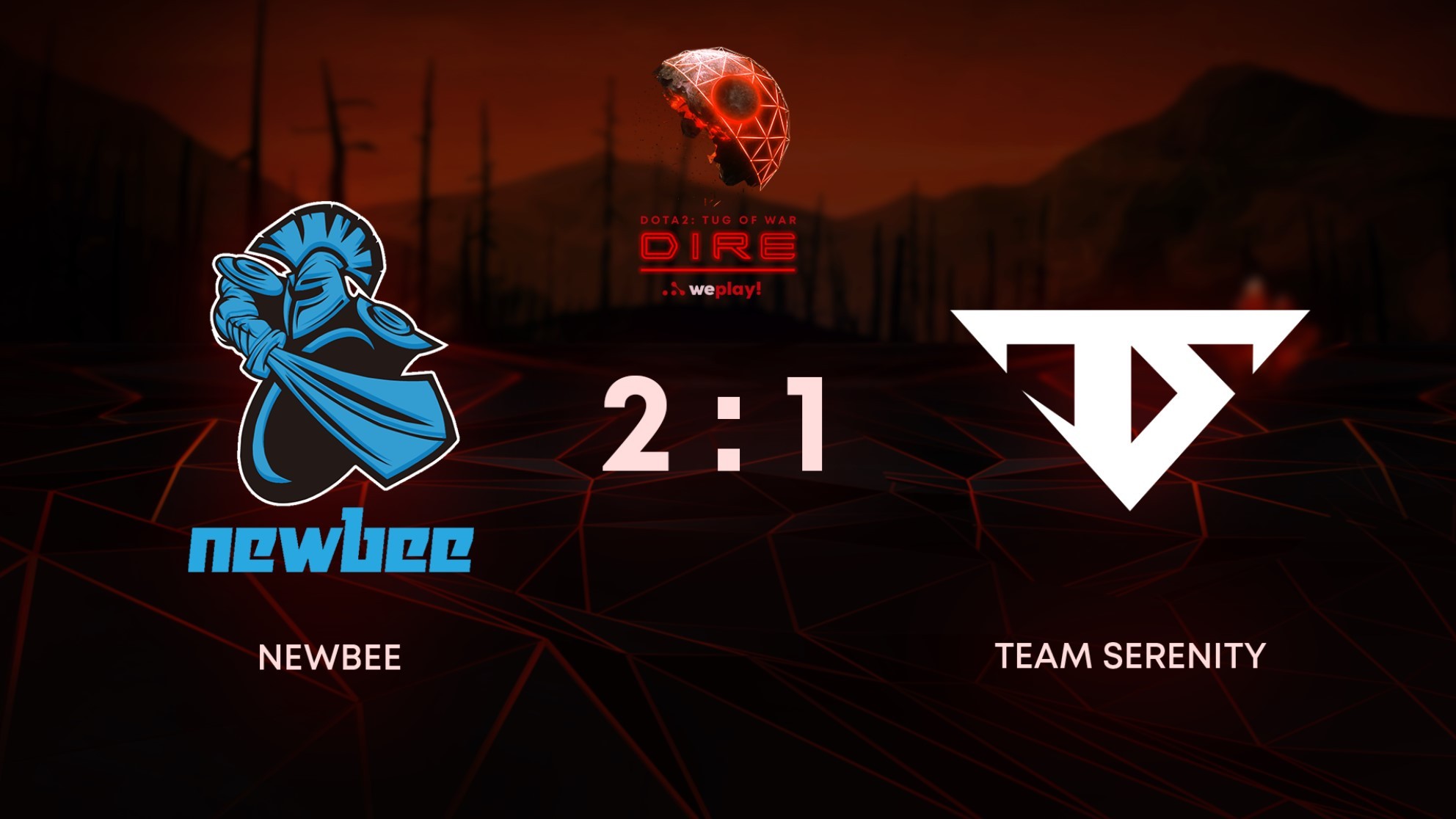 We jump over to the Asian bracket, where the final match of the second game day took place between Newbee and Team Serenity. The fact that Chinese teams are playing was clear without looking at the titles. Team Serenity get a minimal advantage only by the 30th minute of the first map, before that the teams were equal. Newbee was sorely lacking in damage in each fight, and their rivals used it - Team Serenity squeezed the noose around the neck of TI7 vice-champions for 20 minutes, and eventually brought the map to victory.

On the second map, the duel of meta Sven and Troll Warlord received a new iteration. The teams played a sample of Chinese discipline again: the score was a modest 11:10 by the 30th minute. The minimal advantage was at Team Serenity. At some point, Newbee captured the lead - sccc and the company were able to enter the rival base, destroy the lower line of defence, the two shrines and besiege the enemy's Ancient. The defending side lost Sven in an attempt to repel the attack, and he didn't have a buyback. Newbee had no problems to take the second map and level the score in the series.

Newbee was punished by an opponent for losing the previous map in the decisive battle. Despite the presence of the "late" Naga Siren in the draft, the sccc team began a standoff with a series of kills and was able to destroy the bottom Tier-3 by the 20th minute, and opened the way to the enemy's Ancient. This series also ended there - the disoriented Kunkka flew straight into Leshrac's stunning, a fight ensued, after which Team Serenity admitted defeat expectedly.

The schedule for the next (third) tournament day can be found here.