Total War: Three Kingdoms is one of the hottest game right now. Having said that, the Diplomacy system in the game is probably one of its most interesting aspects. In fact, according to the developers, this should be one of the biggest updates in the history of the series.

The negotiation system in Total War: Three Kingdoms is very unique because it takes the form of haggling. What’s more, apart from pure cash, you can also trade various other items, resources, and pacts, which is more than welcomed. Similar to pretty much any other negotiation out there, you have to try to have a positive figure.

You can arrange diplomatic deals in two ways - via the negotiate menu or the quick deal one. If you have no idea what to do, just put your mouse over them and the tooltip should do the job. However, some mechanics and options are definitely a lot harder compared to others.

Other opinions about you

The Diplomatic attitude is very important because it’s the key to achieving your deals with the faction. Having said that, the more the other leader likes you, the more he`ll agree to do deals with you.

There are many ways in which you can have a good relationship with the other Warlords.  In general, doing gifts, preserving the peace and being part of the same alliance is by far the best steps to take towards that. On the contrary, if you make peace with some of the warlords’ enemies or if you are at war with them, chances are that you will never have a good relationship with that faction.

Actions have consequences. This is especially true in Total War: Three Kingdoms because this has a huge influence on the diplomatic attitude. Having said that, always try to think at least a step ahead. By doing this, you will be able to predict what will the outcome be if your actions.

Trust is also one of the most important things to have, especially when you are doing diplomatic contacts. Having said that, certain actions can have a huge impact on how the other faction leaders rest and trust you.

It is important to know that, even though Trustworthiness does it affect the diplomatic attitude, it is taken into consideration during negotiations. So, if you betray a friend of your friends, chances are that it is going to reflect on you as well.

Finally, if your trustworthy meter gets reduced, don’t panic! It will automatically recover overtime unless you do yet another treacherous action.

There is a special tab in the game itself where you can check some common deals which you can do. By doing those deals, you can save a lot of time and you can secure multiple deals with multiple factions. 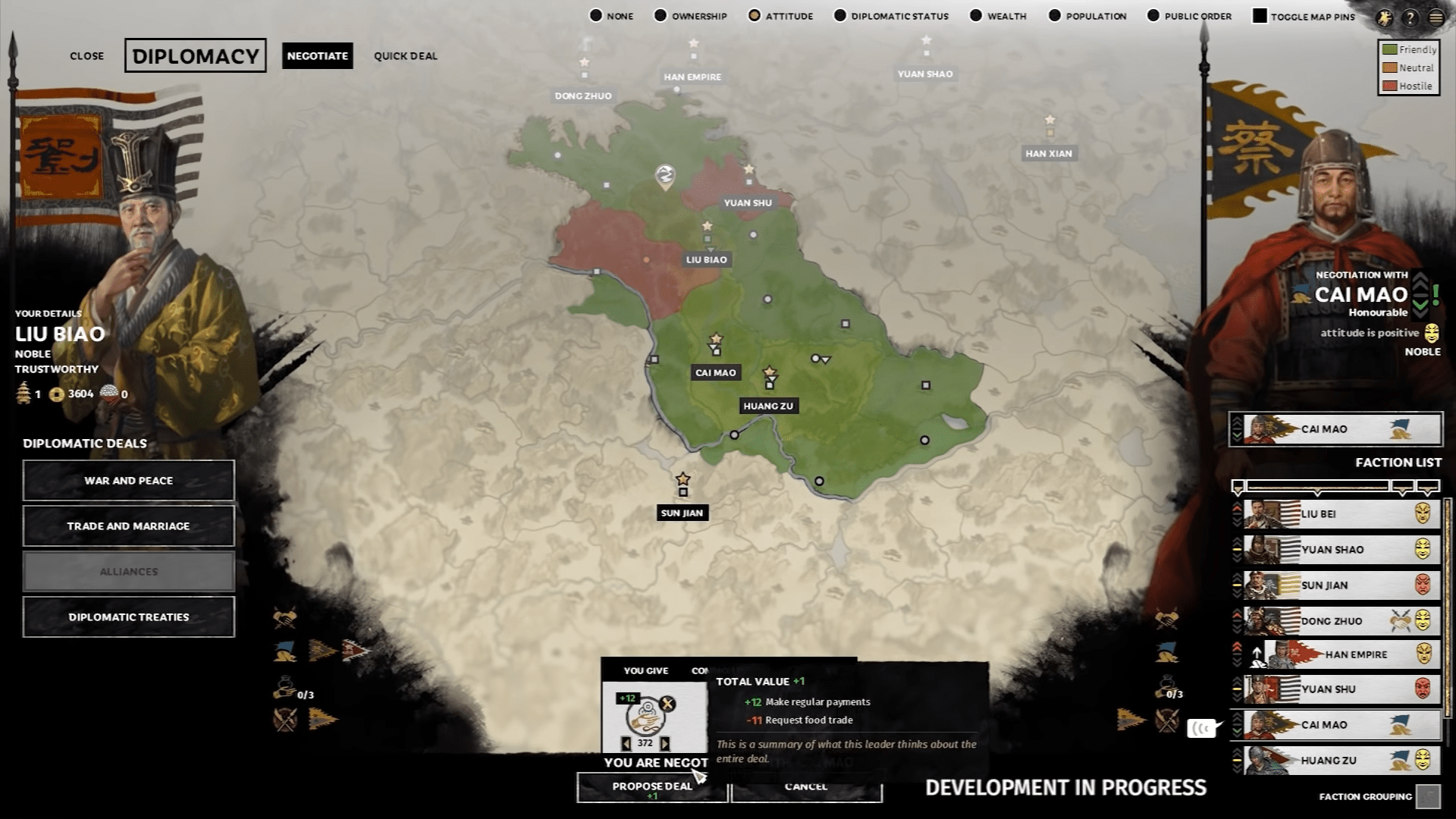 In real life, negotiations take place on a daily basis. Whether you are about to by a car or something else, people often try to lower down the price. The same mechanism works in Total War: Three Kingdoms as well.

When you propose an offer to another faction leader, it goes in the offer box at the bottom of your screen and it has a number. This number is very important because depending on the color, it shows how much the other faction leader values your offer. For example, if it’s green, it is beneficial to him but if it’s red, it might be too costly. Having said that, you must always try to navigate between the different warlords. As the saying goes, “One man’s trash is another man’s treasure”, you never know who will give you more for your product.

At the end of the day, the desirability of any of your deal depends on the diplomatic attitude of the others towards you.  That’s why if your respect rating is negative, you might want to add other goods to tour trade such as cash payments, food or more in order to fulfill the trade deal.

In general, the higher the number, the more desirable it is for the other faction leader. Remember to always experiment with different offers because you never know what will work.

Finally, the developers of the game have also thought about all the people who just don’t want to go through this hassle. You can always click the “make this work” button, which will reveal what you need to do in order to do the deal. This is very useful, especially for the players who are just getting into this game.

Diplomatic categories of your deals

There are various deals you can do in the game. However, usually, they are spread into five categories - War, Peace, Trade and Marriage, Vassals, Alliances and Diplomatic Treaties.

It is important to know that not all categories are available in all circumstances. For example, you can’t have a peace deal when you are at war with someone.

There are various coalitions and alliance throughout the game, which are basically military agreements between factions. When you are a part of such as “team”, you can get plenty of benefits for yourself. For example, a shard army, better deals and so on.

What’s more, all factions under this “team” will get various bonuses in their diplomatic attitudes towards each other.

Any member of the coalition or the alliance has the opportunity to vote. Voting is a must when another faction wants to join the existing one. There are also various other occasions where there could be a vote called. For example, voting is needed in order to remove a faction from the collation or the alliance.

In addition, voting can also have a huge impact on diplomatic attitudes between the members. So, if the vote doesn’t go in favor of those who wanted it, their attitude will fall. That’s why you have to navigate carefully between the votes in order to keep the balance of your coalition.

The members inside the coalition are free to have any relationship with the other factions. Coalitions are a non-binding form of alliance, which gives you a lot more freedom. However, in order to form one, your warlord’s faction rank must be either Marquis or better. Having said that, you don’t need a very high diplomatic standing.

Apart from coalitions, you can also do military alliances. Unlike the others though, these one are binding agreements, which means that you can assists each other when someone is attacked.

Of course, the military alliances are way more powerful due to the helping factor. Despite that, each member can still choose to start a private war, even though his “friends” won’t be joining him.

Again, similar to the coalitions, your faction rank must be Marquis or better in order to form a military alliance. What’s more, you need to have a relatively high diplomatic standing with another faction as well.