Virtus.pro had the chances of reaching both the top of the Playoff bracket (with certain conditions) and the series of tie-breaks to the final game day of the group stage. The first option was three winning maps out of four (five points available plus three fresh points). The second: two maps with victory (five plus two points).

VP picked Alchemist for RAMZEs and Queen of Pain for No[o]ne. Evil Geniuses responded with Naga Siren and Storm Spirit for SumaiL. The teams showed a fair game at the beginning. But by the 20th minute, it became clear that Alchemist wasn't ready for large-scale battles. Virtus.pro fought badly twice within three minutes, and lost four characters without equal exchanges twice, too. The strategy with Alchemist failed. RAMZEs couldn't outperform Arteezy on the Naga Siren, even after Radiance appearing. SumaiL surprised with the early BKB purchase. The Pakistani leader preferred this artefact to everything else, and this was the critical decision of the whole map: his Storm Spirit became merely elusive. Virtus.pro lost three characters again in the decisive fight and admitted defeat at the 28th minute.

Now the "pandas" had nowhere to retreat, and the next defeat meant the Playoffs start from the Lower bracket. Virtus.pro stole Storm Spirit for the decisive map and equipped with Lifestealer. Evil Geniuses repeated Naga Siren for Arteezy. Cr1t chose Gyrocopter, Undying, Sand King and Earth Spirit.

An early game didn't reveal the favourite of the match. The first important battle took place in the 27th minute when both teams surrounded Roshan. VP lost Storm Spirit, which used a buyback, while EG retreated unscathed under cover of Song of Siren.

Nevertheless, the CIS team could stand the opponent's pick strength and create a small miracle. Virtus.pro won the most critical fight and turned the game for their advantage. Evil Geniuses left without an upper side, completely lost their lead and were under higher pressure. Storm Spirit with BKB and Lifestealer with Rage got their potential to heaven, and Naga Siren from Arteezy was just useless. VP could snatch the second map from Evil Geniuses and stay in the fight for reaching the Upper bracket (and possible replay between the teams with 8 points already). 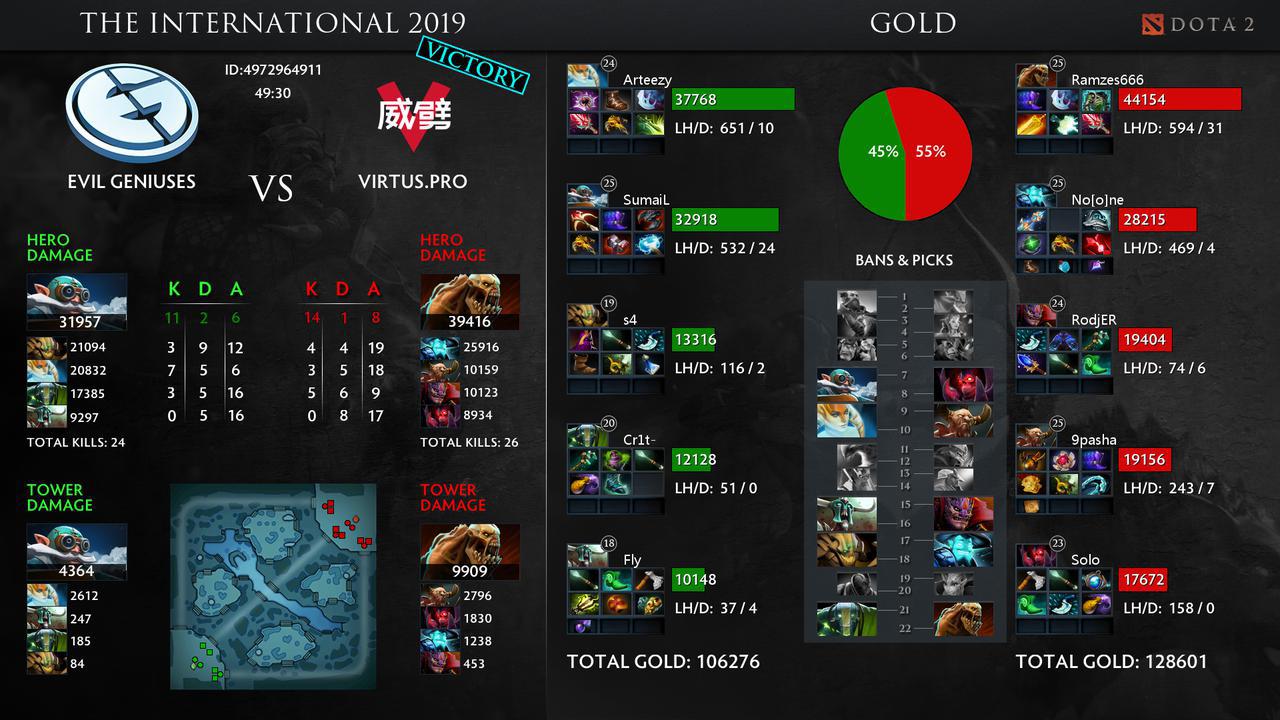