The second game of the day is Team Secret against Evil Geniuses. The winner of the match proceeds to the upper bracket semi-final versus OG, who had recently and easily overcome Newbee. Can Puppey's gang beat Fly's boys? There's only one way to figure it out!

The teams decided to farm passively. But as soon as midgame approached, EG took control of the game. They started to gank and kill. Team Secret could not resist. At certain points, however, it seemed that Puppey and the team took the lead, but EG was not long in coming and demolished the European team at Roshan. Mid and bottom fell. TS were dying and dying, Arteezy was overfarmed and killing it. In the 45th minute, EG confidently entered top lane high ground, killed their rivals who bought back and EG calmly retreated. The score and gold advantage at that time was 24 kills and 24k gold. After a couple of minutes, the American team went to the base, killed the heroes and broke the throne. Simply. SumaiL did a great job on Leshrac. 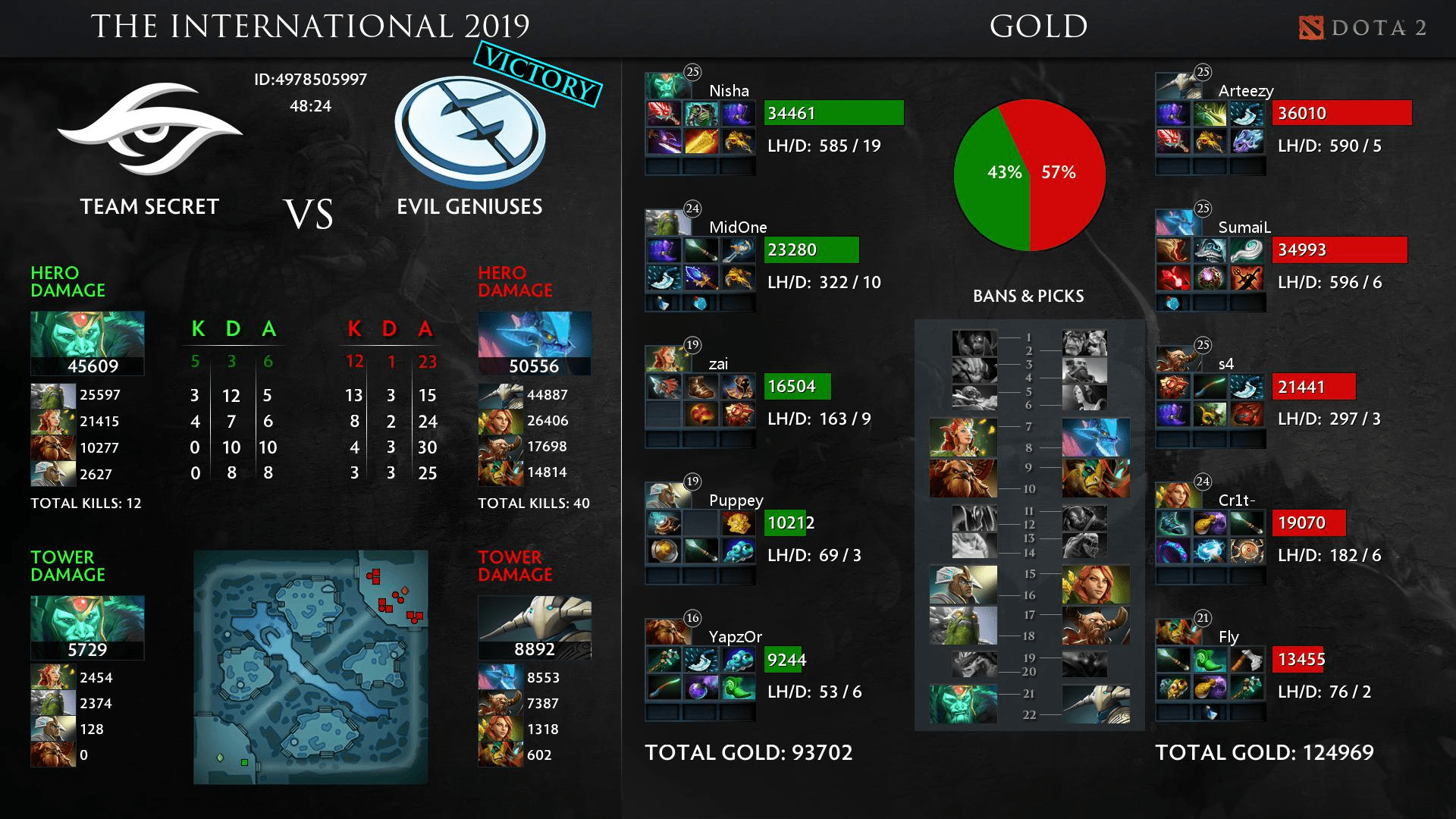 The second game saw Nisha on Void, MidOne on Invoker, and SumaiL again on Leshrac. It was to be expected that the teams would fight 4 on 4, while Void and Sven farm, but Nisha decided to join his team. A couple of good chronospheres, however, did not help Puppey survive. Secret's pick was aimed at dealing damage into Void's ulti and they succeeded. The teams periodically defeated each other in fights with beautiful plays. The key to success against TS' pick was to zone well. And EG did it greatly. Enigma was completely powerless. But s4 on his Tidehunter had a wonderful time catching rivals with Ravage.

A good initiation is a bid to win. A chic Blackhole from Zai in the 31st minute helped Secret stabilize the situation. But after a couple of minutes, EG has won a fight and killed Roshan. It was a copy of the first game for SumaiL. He even purchased artefacts in accordance with the timing.

46th minute, an incredible fight right in the centre of the map, two Blackholes, a dome, SumaiL's dead, three buybacks from EG — TS seemed to have won the fight, but EG immediately pushed them on the base and broke the barracks. Because you counter the whole Team Spirit's pick with instant buybacks and Boots of Travel. At the 57th minute, the situation repeats itself: a fantastic performing of ultimates from both teams, EG die and buyback. A minute later, the fight on the top Radiant shrine, Blackhole hits four heroes but there is no damage to deal from the side. Rubick steals Blackhole, his team kills Roshan, Rubick takes Refresher Shard. Maximum voltage. Void gets caught in the forest and killed, buys back.

After a couple of minutes, a fight happens. Instant GG. See it for yourself: 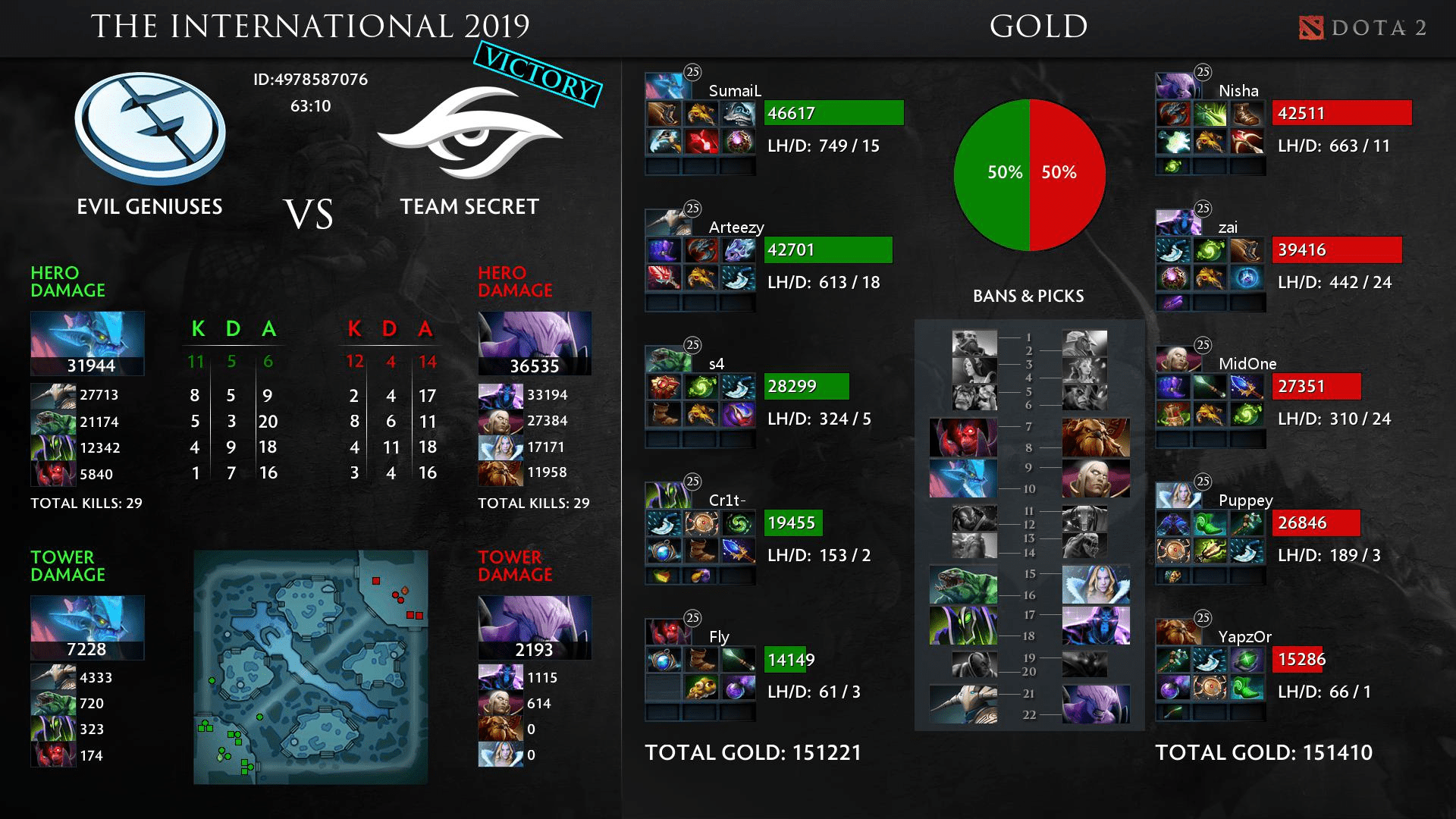 So, the decider. Quite an exciting and surprising pick from Puppey looks like a home-made thing. A very tense start without lots of kills, but with attempts. Secret had an advantage in gold, and a solid one: 6k in the 10th minute. The first serious fight happened in the 14th minute. Both teams suffered heavy losses, but TS were more likely the winner: YapzOr made a triple kill on Mirana, Weaver survived, and EG had only Enchantress alive. MidOne, who failed the second game, tried his best to improve and showed a good game on Slark. Suddenly, after 10 minutes of relative calm, EG won a fight on the top lane, killing four heroes, and took Roshan. At the 32nd minute, EG tried to enter the base from the bottom lane, killed the heroes and took the barrack. Secrets did not give up and even had some good fights. But EG caught courage and won a long fight with chases.

At some point, Evil Geniuses gathered everything they needed for team fights, while the leaders of Dota Pro Circuit simply faded.

You can find out about all the news regarding The International 2019 by clicking on this link. 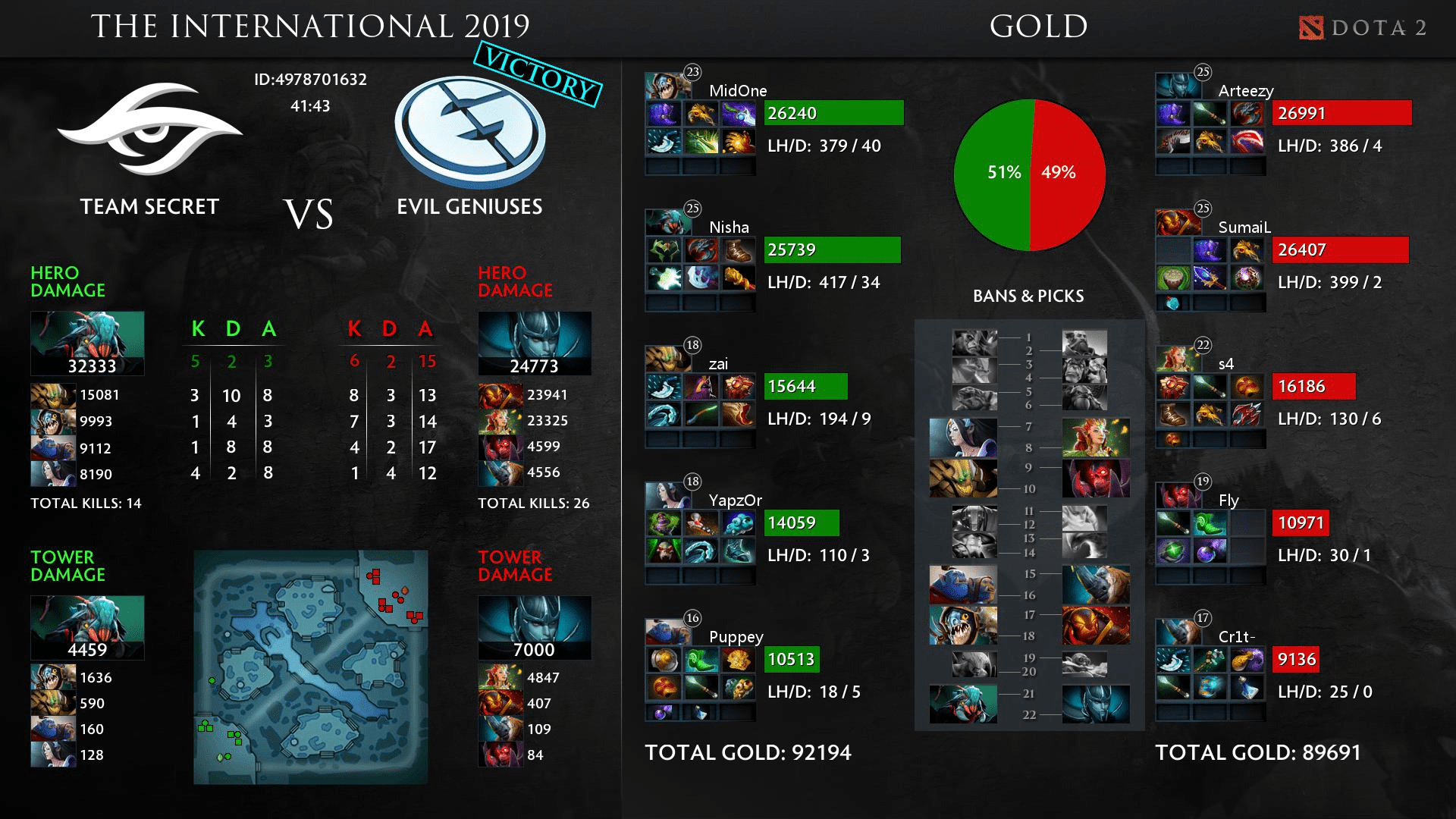