The second game of the day was Vici Gaming vs TNC Predator. Once PSG.LGD has progressed through Virtus.pro, it was a decider of who will clash with last year's runner-ups. But before the match started, the English broadcast hosted Dendi as an expert. He spoke about his preferences of this tournament and named his favourite chat wheel phrase:

Lina vs QoP on mid is always interesting. Beautiful micro fights from lane to lane with a slight advantage for TNC. They wanted Vici to fight, the Chinese themselves fancied a more relaxed game, which could not be allowed. Until the 25th minute, TNC dominated the fights due to a rather aggressive pick but closer to the half-hour mark, Vici began to show what they can do. The battle at Roshan ended in favour of the Chinese, although partially TNC managed to espace. After 3 minutes, the scenario repeated, QoP strikes an excellent ultimate, but three heroes, including Akasha herself, ended up in the tavern. Vici went to Roshan, TNC bought back, killed several Vici heroes, they buy back too, the fight drags on and in the end, Vici retreat. TNC demolish T2 mid tower. 43rd minute: Vici make mistake near TNC's shrine, QoP makes a triple kill, Jugger makes a dieback. Vici crumbled into pieces and TNC after a successful fight took Roshan. On the 47th minute, they tried to enter Vici's highground. Magnus died, but TNC were left without BKB. And so they retreated. 48:00, the attempt repeated, but Vici simply tore TNC apart. LS infested Tiny and they were the only ones who got away. Vici were trying to kill these two for a very long time, the chase dragged on, Witch Doctor and Magnus were killed, Gabbi with his LS almost repeated Arteezy's highlight (but had not enough damage) and then everyone retreated. On the 55th minute, Vici took Roshan, Magnus picks up the dropped Refresher shard. But Lina makes a mistake and gives it away in a minute, while TNC ran away before the opponent's team got to the scene. Lina a minute later takes revenge with her team behind her, destroying LS and Sand King. But an attempt to enter HG fails because Armel strikes Sonic Wave and demolish half of Vici's heroes. Four deaths, fully armed TNC are attacking. But, you know TNC: fight, lose a hero, retreat. After several attempts to finish each other, in a protracted fight, Vici makes three buybacks, but TNC push them, kill them again and Vici gave up. 77 minutes of pure pleasure. 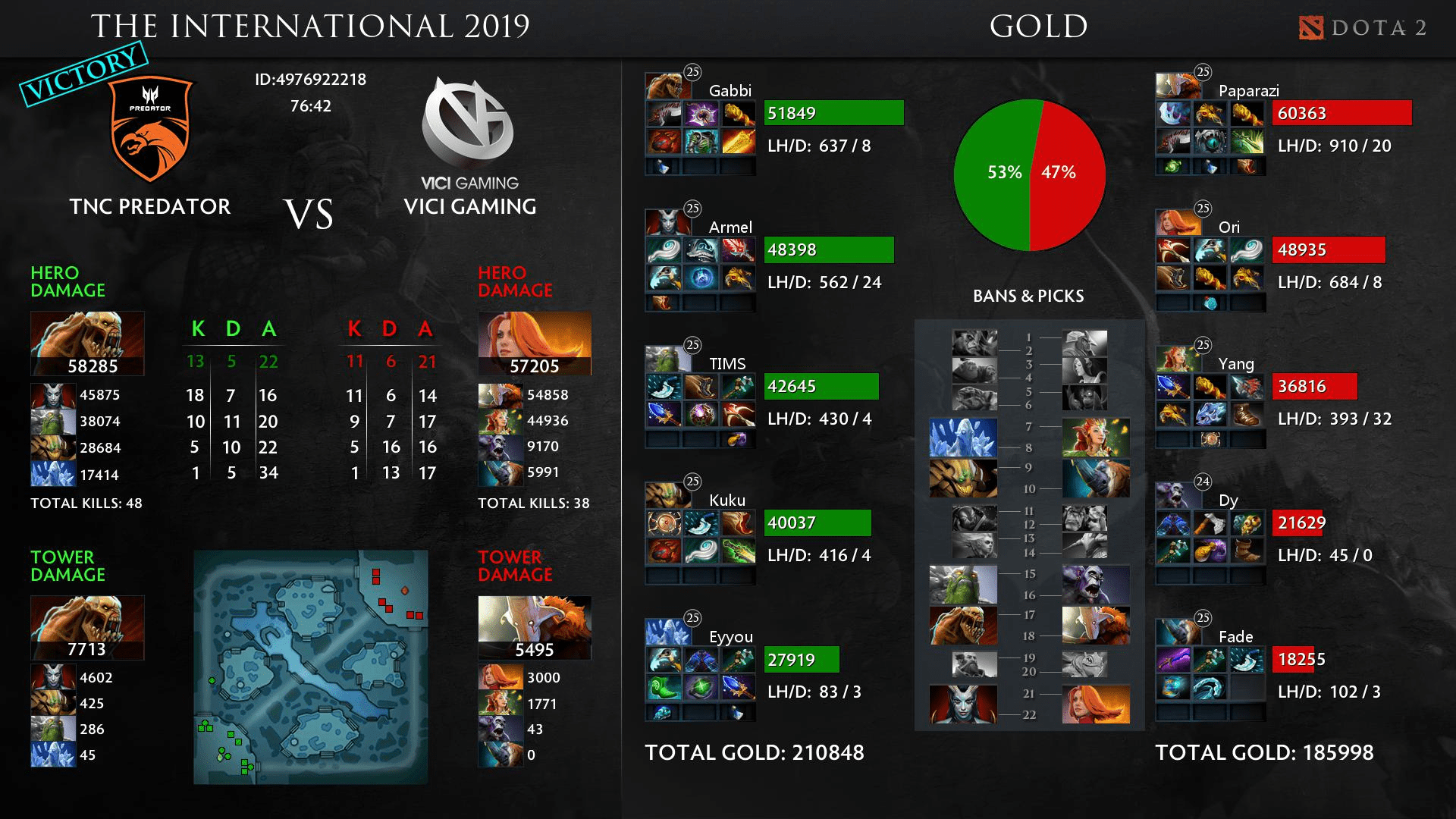 There were no battles here. Game of Farm. The first serious fight happened at the 17th minute. Vici were defeated, TNC took Roshan. The next loud fight was in the 28th minute, Vici lost again. A measured farm, it would seem, is convenient for the Chinese, but the game did not just flow how they wanted. Farm, slam, scatter: the slogan for the second game. 39th minute, a beautiful fight, Vici lose four heroes. TNC show a very confident and good game. At the 46th minute, Vici managed to defeat TNC in a fight, but nothing game-changing happened: the entrance to the high ground was quickly cancelled once Razor bought back. 55th minute, 25k advantage in gold in Vici's favour. They push the enemy to the base, go through the mid, break Razor's face for 120 seconds, demolish the lane, break the tower on the bottom, start running away. But TNC caught them and showed who the boss is. Immediately after that, they went on a counterattack and destroyed enemy's bottom lane, but in an attempt to escape they lose Tiny, Bristle and Razor. Vici came to the base, break down the opponent's buildings, break down their heroes and force them to surrender. All square now. 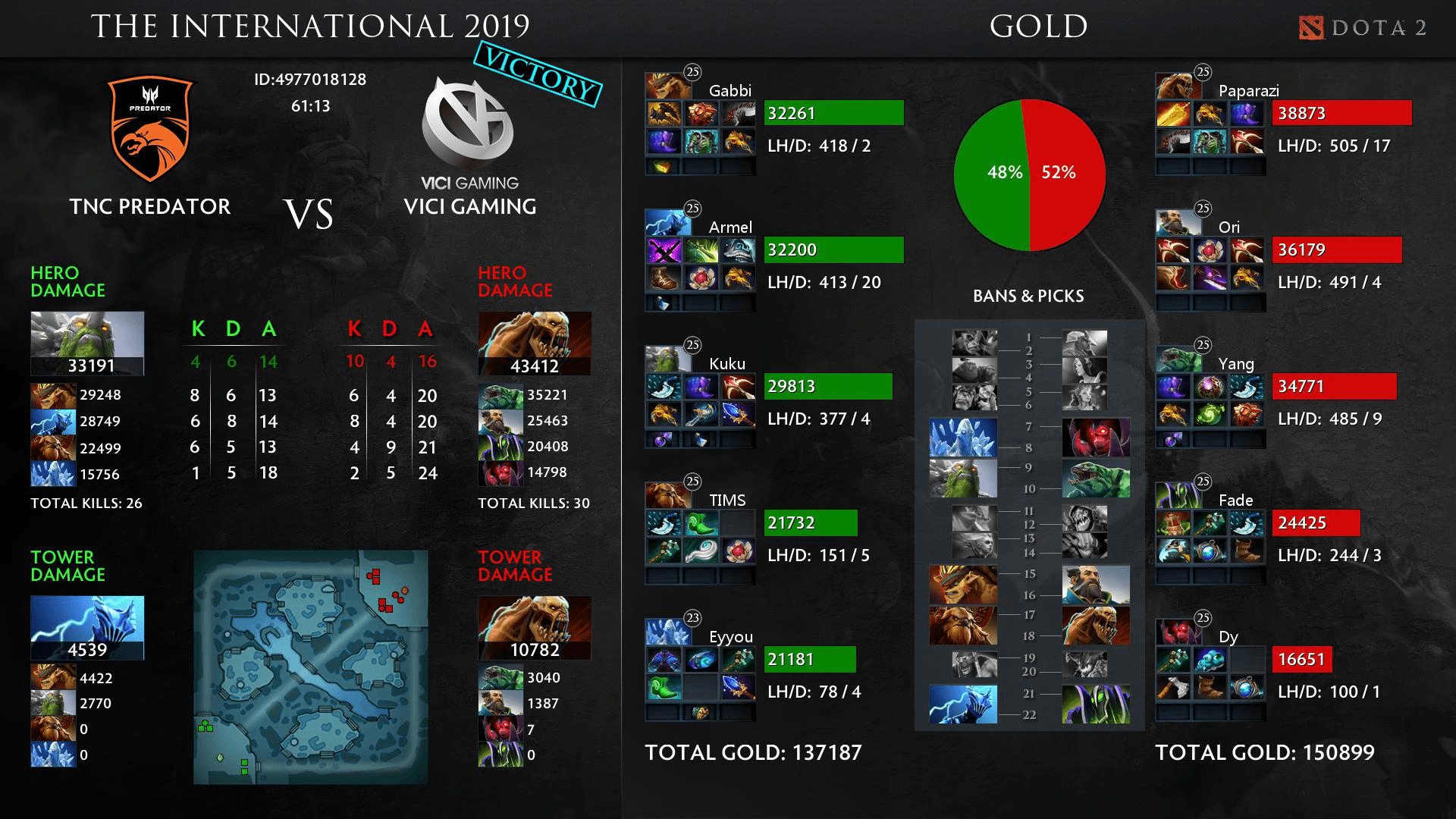 The game started quite cheerfully as if both teams were tired of hourly games. The roles turned upside down and now Vici with a very aggressive pick imposed fights. Armel's Broodmother was a bold and interesting choice, and mid was the only lane that did not fail for TNC. Vici were dominating with four (Centaur, Warlock, Leshrack and Shadow Demon) heroes, and Medusa was calmly collecting money from creeps. At the 25th minute, there was a lengthy fight on Roshan. Vici spent their resources very well, Medusa baited, and as a result, TNC fell apart. The score was 17-6 and the gold advantage was 16k at the 30th minute. Well, in the 31st minute, Vici ran over the opponent, went to mid, destroyed the barracks and ... retreated. Haha, classic. A little later, Vici killed Brood and Grimstroke, headed for the base and demolished the top line. And then the bottom. Juggernaut couldn't do anything against the enemy heroes. So TNC wrote 'gg' meaning they've accepted the fate of the lower bracket. 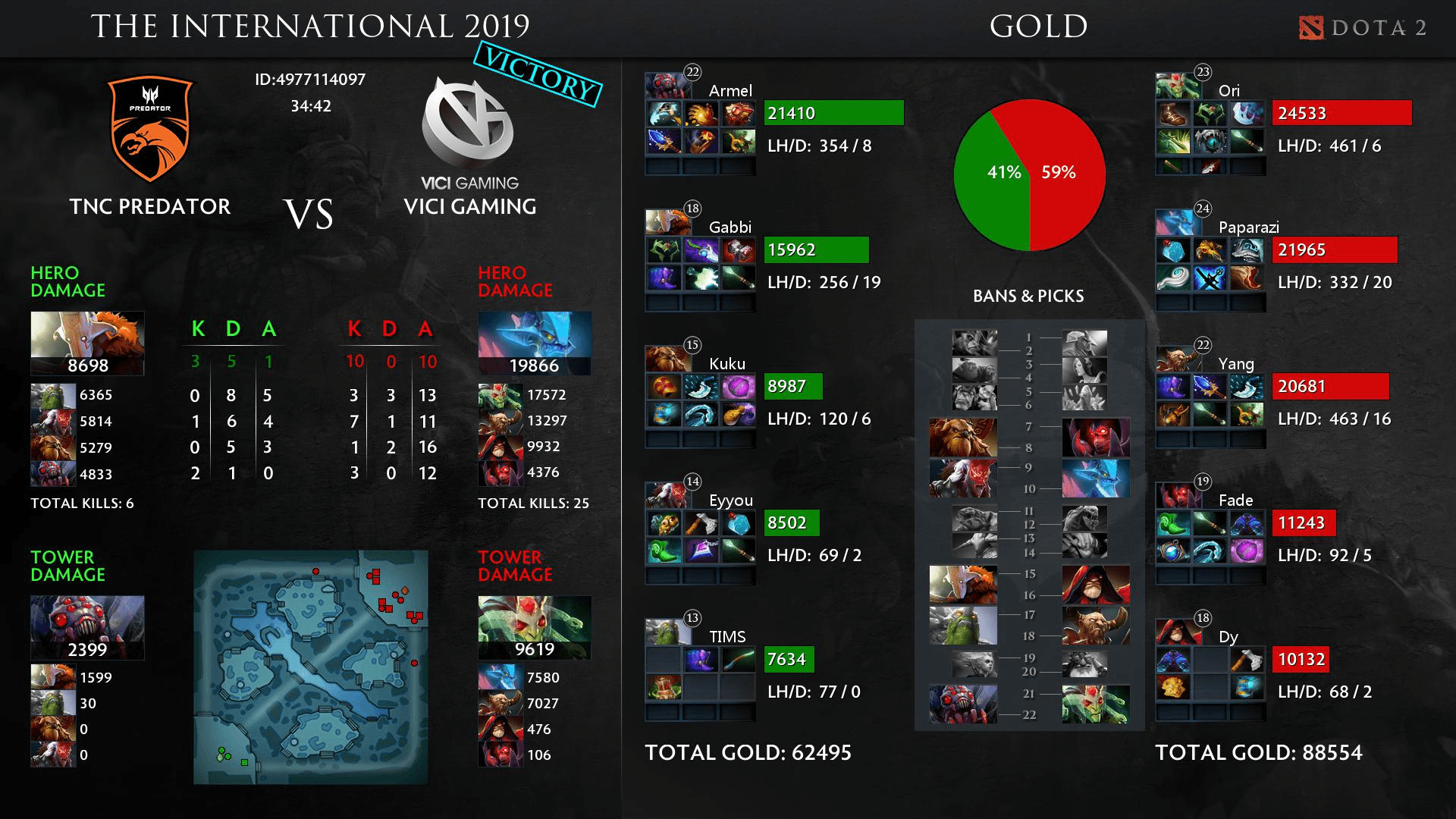