Mid Earthshaker vs mid Riki. Yes. Infamous have picked Rikimaru. And rare Lancer and Silencer. It was triple on triple in the top lane.

Secret did not want to give Infamous a quiet life, very seriously causing damage along all lanes. Lancer suffered along with his supports. In the 18th minute, Infamous killed three enemy heroes in a wonderful way, and Earthshaker barely escaped. After a couple of minutes, the situation mirrored with the difference that Secret had won this time. At the 22nd minute, Infamous decided to kill Roshan, TS knew it and there was a battle in which a two-in-two exchange ended still in Infamous' favour since they took Roshan. Then they killed Void on the top lane, after a couple of minutes they killed three on the lower lane, went to the base and broke the lower barrack. And all because of Hector farmed his Lancer well. But Secret managed to fend off, although the spearman managed to escape. Mineski also dominated the entire match, but Secret is good in that they can turn any game.

This happened in the 32nd minute. On the lower rune, Infamous seemed to destroy MidOne's Shaker, but he bought back and defeated the whole Brazilian team with Tiny's help. Then, six minutes later, a tense battle took place in Dire's forest, where Void got killed and Secret barely escaped. Infamous broke the top tower and the barrack and left. After that, TS caught several Infamous heroes in the forest, ripped them apart but retreated. Ping pong game again.

After a successful fight, Puppey's team took Aegis, went to the enemy's base and broke the top lane. Infamous did not particularly resist, realizing that a fight without dead Riki could not be won. At the 50th minute, Team Secret's gold advantage was 33 thousand.

"Vamos Infamous," people were shouting out loud in the arena. But Secret just dominated. Confidently and in class. Puppey and his comrades pushed the enemy to the base, initiated a fight and brought the game to an end. Infamous simply did not have enough damage to kill enemy heroes. 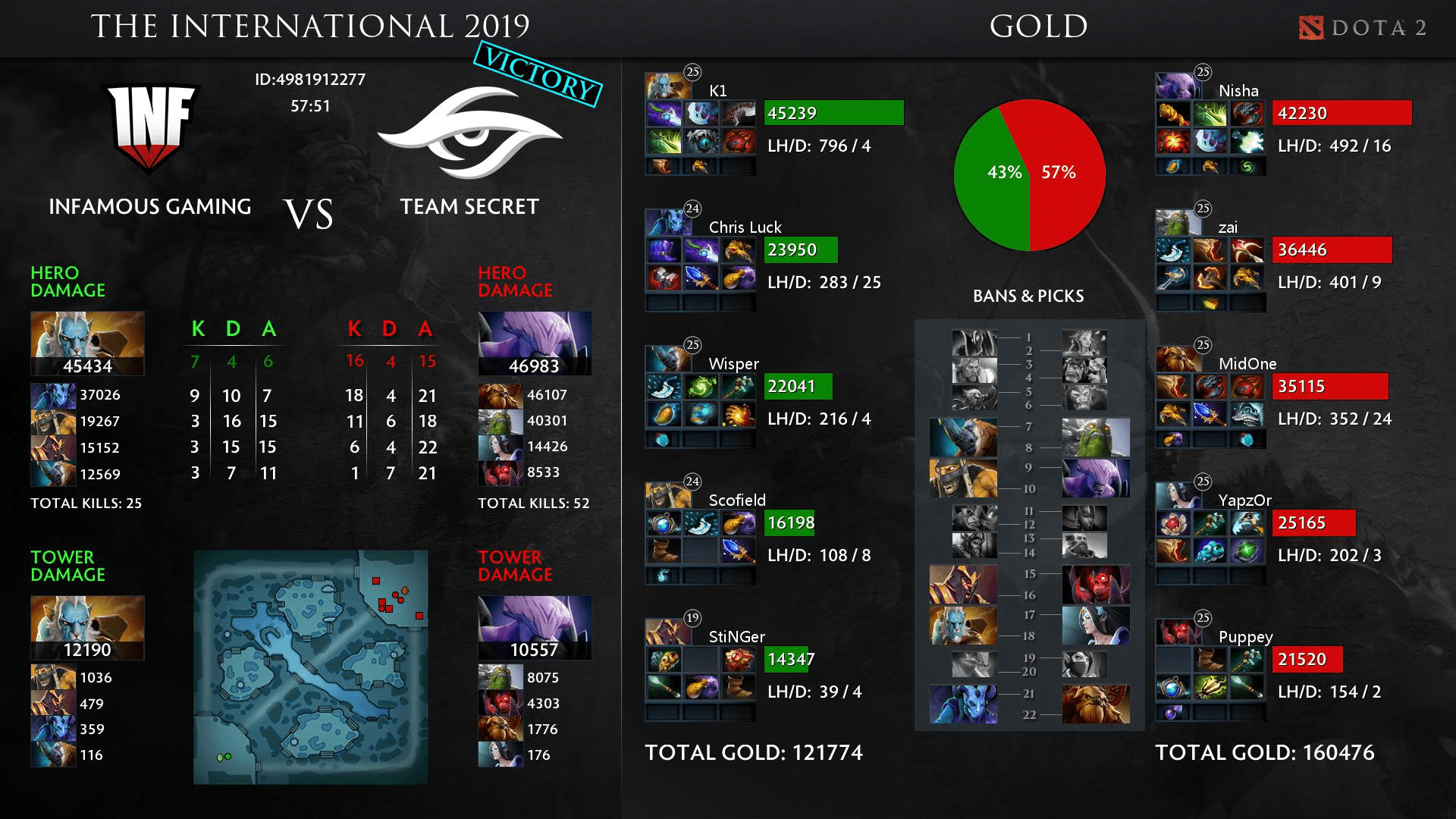 Infamous picked Doom to control enemy heroes, while Secret secured the classic pub meta of Witch Doctor and Void. Infamous lost all their T1 towers before 10:00. Chris Luck had problems, while Hector with his Lifestealer was trying to farm. Team Secret was pushing all along. Infamous were stuck on their base already in the 14th minute. In the first serious mass fight, Infamous attacked Enigma but Void has arrived with help. Infamous lost two heroes and retreated. A minute later, Infamous lost the fight at the Roshpit: four heroes died, except for Hector, who was farming. He understood that his team needed him so two minutes later, when TS were taking Roshan, Infamous attacked them, killed them and forced to do three buybacks. Then, the Brazilian team ran away losing Shadow Demon and Tidehunter only. And after a couple of fights, Infamous' cores got caught in the middle of the map, Team Secret reap them, attack the base and that's a GG. 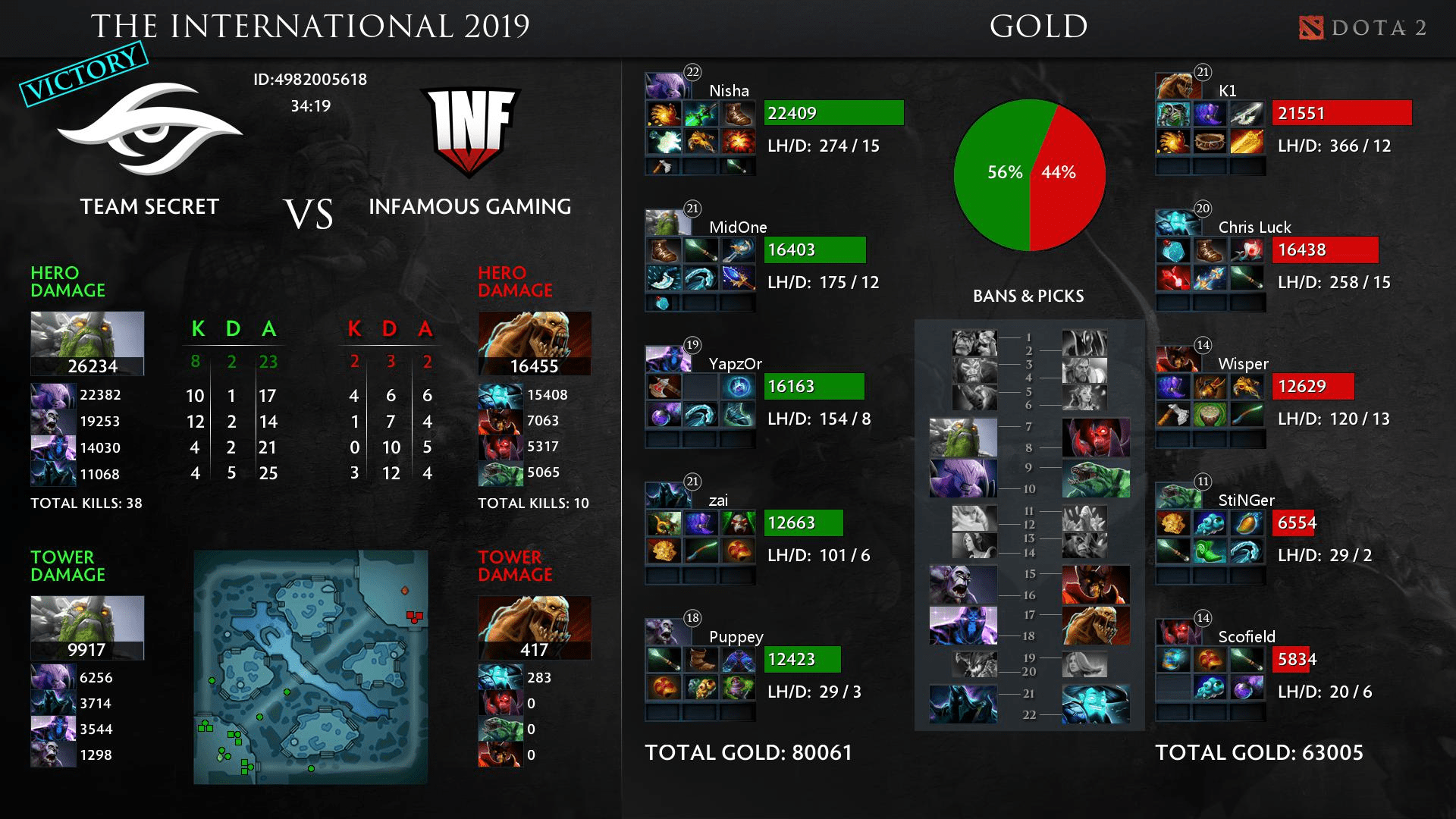