Another day of The International 2019 begins with Royal Never Give Up - Team Liquid lower bracket elimination match.

Royal Never Give Up must have been surprised with Kuroky's decision: Team Liquid got themselves Night Stalker with their fifth pick for MinD_ContRol. From the very beginning, w33 suffered in the mid lane with his Tiny: Setsu's Ember Spirit felt much more confident with the help of constant ganks from his teammates. But despite the great mobility of RNG's pick, they lacked damage to quickly kill opponents in big fights without artefacts. The first serious fight happened at the 16th minute near Roshan: one death per team, all the others spread out. Well, it is obvious that as soon as night fell, Liquid went on the attack with all their power. No matter how many times RNG tried to attack the seemingly separated Liquid heroes, Miracle- on Gyro with the help of Relocate and Night Stalker instantly appeared nearby and killed the rivals. At the 28th minute, Kuroky's team made an attempt to enter the enemy's base through the top lane, but they didn't have enough damage: they've lost the fight, almost everyone died. Not without the help of buybacks, of course, but nonetheless. At the 32nd minute, Miracle- caught Mirana's arrow, but unlike VP's RAMZES666, he had Satanic and Butterfly at that time, so Team Liquid killed almost all the opponents in the fight, went to the base, but they couldn't crush it: again, buybacks made them retreat. Two minutes later, they decided to enter from the bottom lane, successfully broke the barracks and heroes of the opponent, there were no more buybacks and RNG surrendered. 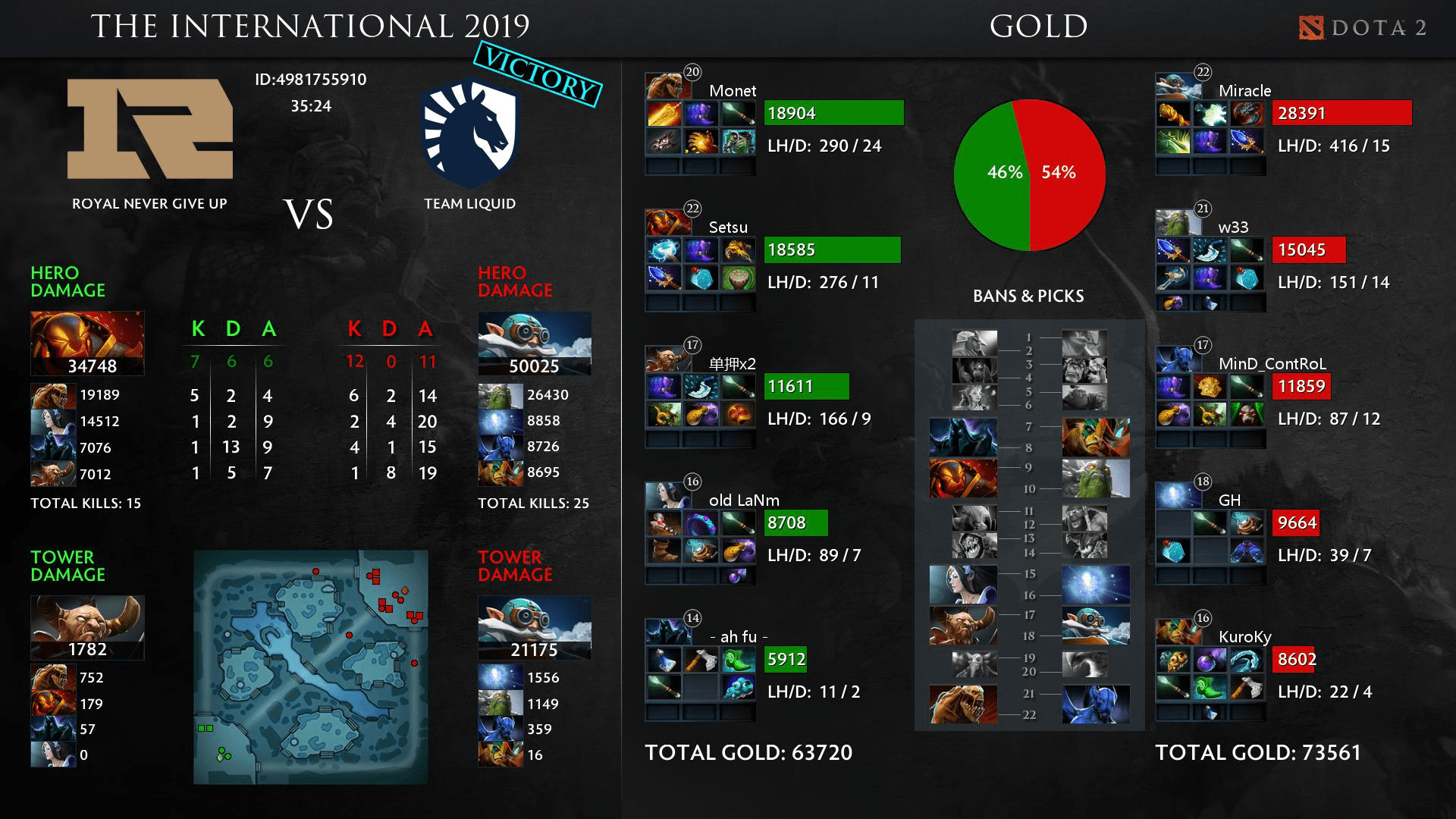 The second game, and again an interesting pick from Liquid: Miracle- goes to the mid lane on Arc Warden. Triple versus triple on the top lane and Sand King vs Enchantress on the bottom. The early game was marked by constant micro fights between the triples, which was to be expected. RNG played aggressively and pushed. Liquid were farming and waiting for Miracle-. And at some point, they just got together and began to fight back. In the 22nd minute, in a fight on the lower rune, Liquid killed five of the opponent's heroes, including Bane's dieback. Very confidently and calm. And Miracle- farmed. At the 33rd minute, RNG suddenly demolished the entire Liquid team on the top Radiant shrine, Setsu made a triple kill on OD, the Asians went on the attack to the base, but Liquid bought back, counterattacked almost all RNG heroes and almost went to the opponent's base but there just was not enough time. The game dragged on. In the 60th minute, Liquid finally decided to siege the enemy base. And they won in a major fight, forcing the four RNG heroes to buyback. Nevertheless, having given all the forces to this attack, Kuroky's team turned and left. After a couple of minutes, the siege repeated, but after Tiny made an error, the team loses its cores and retreated. RNG took Roshan, OD ate Aghanim Shard. Even with Arc Warden in the lineup, Liquid were not ahead of the rival in terms of gold. The Chinese team enters the base, but immediately receives incredible damage from Tree Toss: Gyro and Shaman died in a second. After a very protracted siege, in the 78th minute, Liquid went to Roshan. RNG decided to lunge and at the cost of everything they killed Miracle-. But they didn't kill four other enemy heroes, who performed a bloodbath. Five heroes of RNG are dead, no buybacks. Team Liquid broke into the enemy's empty base and ended the match. 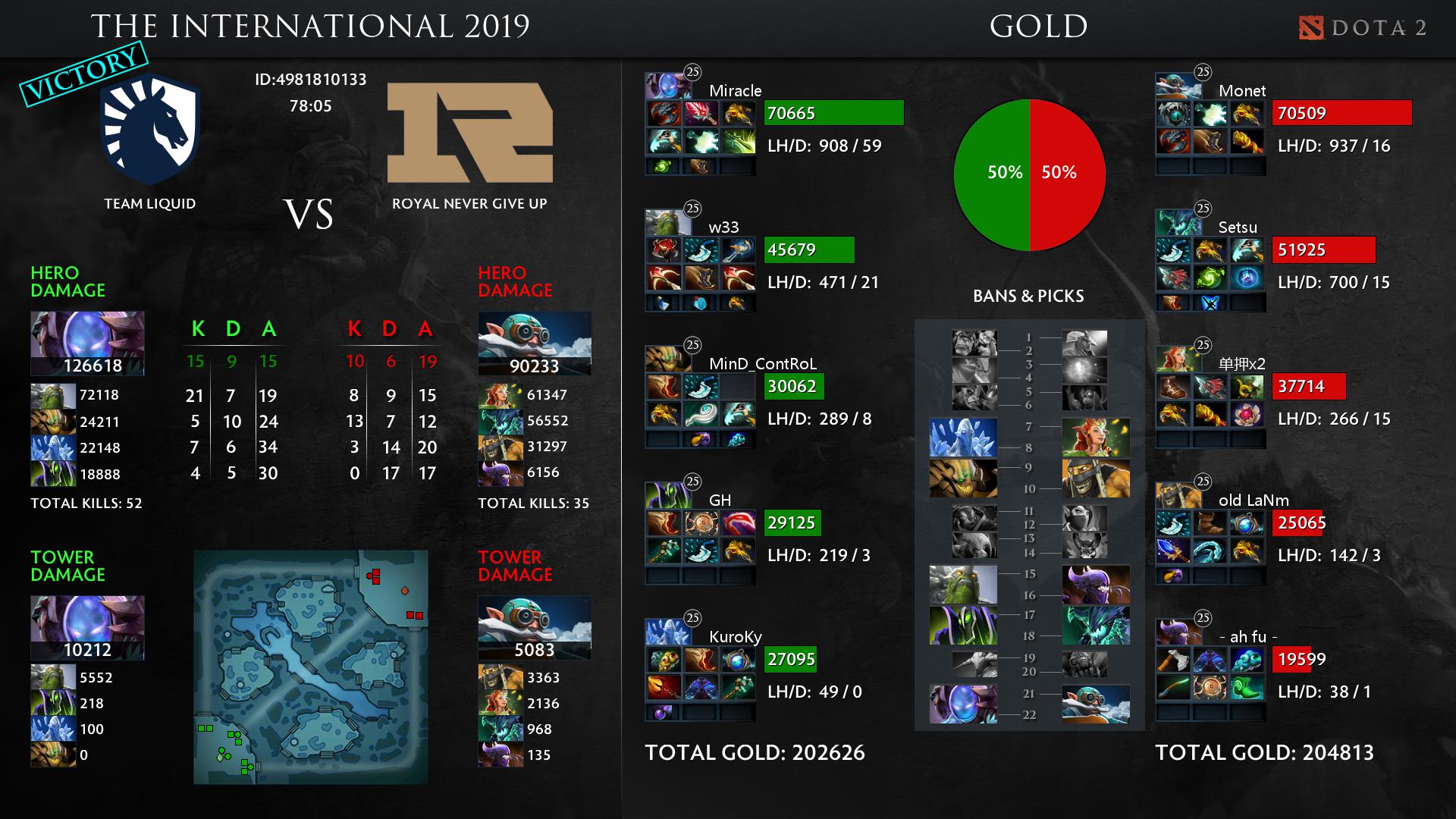