The great Chinese derby. PSG.LGD against Vici Gaming in The International 2019 semifinals.

Two teams (or actually, two professorial departments of discipline) showed the real unshakable standards of Chinese Dota 2. Players did not get involved in unnecessary fights and were just farming gold and waiting for the artefacts to come. Both teams looked like sports cars, burning tires at the starting line in anticipation of a starting signal. And it sounded! Just in time for the midgame, Maybe got BKB on his Kunkka and the unimaginable began. The siren sounded and the racers rushed along the track! The debut fight took place at 23rd minute, and from that moment the situation on the map did not subside even for a minute: a skirmish after another. They all ended with alternating success, both teams seemed to dance with each other, understanding and accepting the status and size of the opponent.

At 34th minute, PSG.LGD killed two rival heroes and broke one tower and one barrack on Vici Gaming's bottom lane. PSG.LGD managed to push the enemy to the base and significantly narrowed the opponent's operational field. The key moment of the meeting was divided into two clashes: the first was when Vici Gaming won a fight at their own upper shrine (which cost three buybacks), and the second was when the buybacks were not enough in the decisive fight for Roshan. In a protracted fight (there were no others here), PSG.LGD defeated the opponent, got Aegis and set off to reap the benefits of their tactical genius at the opponent's base. The in-game clock recorded the finish time: PSG.LGD's race car was victorious, and it took 42 minutes and 10 seconds to finish the game. 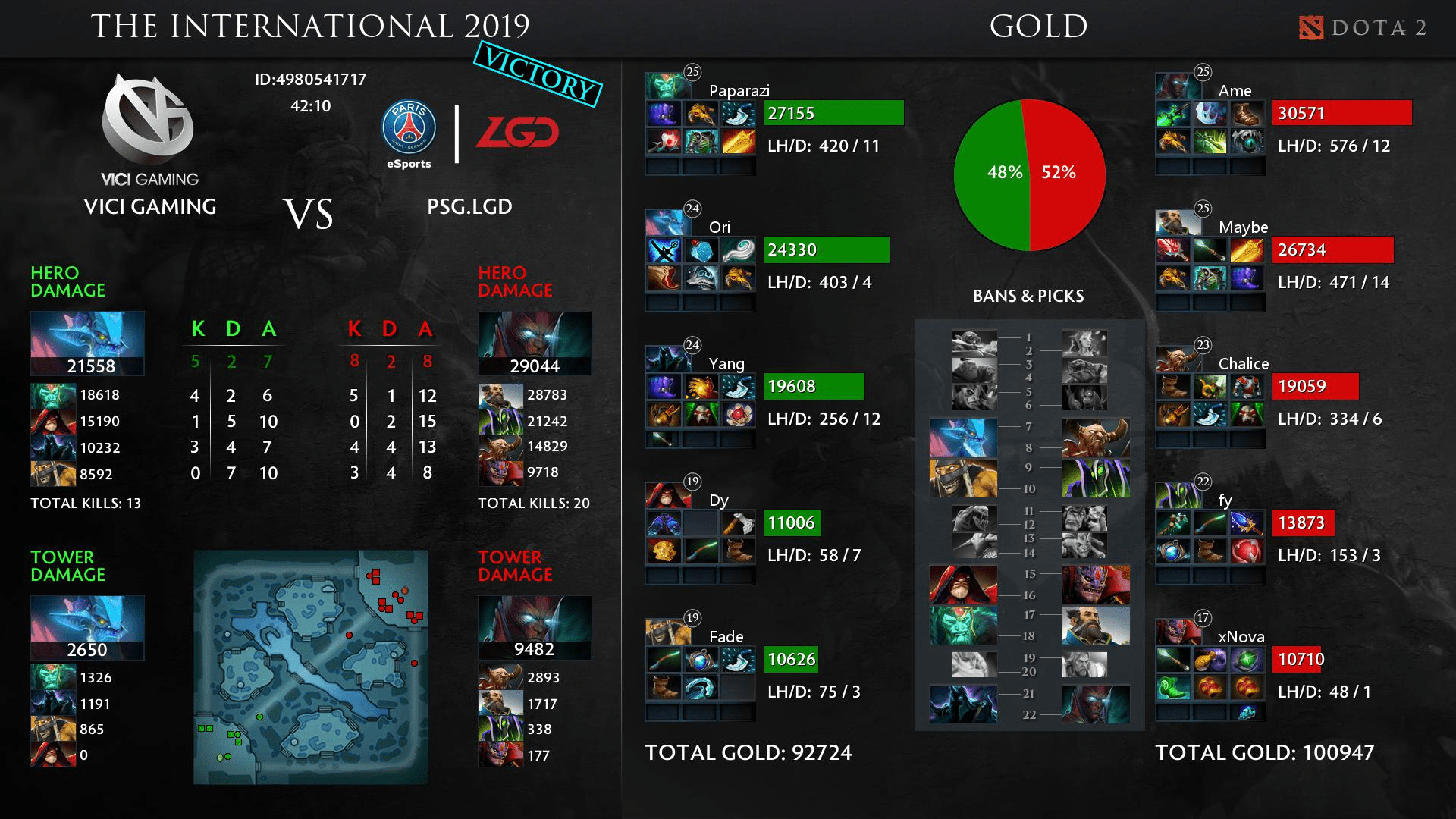 The teams already felt each other and on the second map began to play more actively. Fast farm Sven competed with three PSG.LGD's Hand of Midas heroes. Seeing the rival's 'Midas game', Vici Gaming launched a full-scale siege. PSG.LGD lost ancient creep stacks over and over again and soon remained without external buildings. Nevertheless, the French-Chinese club found the answer and, after 30th minute, had a successful fight in the enemy's forest, forcing VG  to make two expensive buybacks. The statistical graphics seemed to be in perfect balance, but PSG.LGD were sensing blood. At the 36th minute, Spectre and Dragon Knight defeated the opponents in their own forest and quickly left Vici Gaming base without the mid lane. The gold advantage of PSG.LGD immediately rose to 12 thousand. At the 40th minute, it became clear that the map, and the series, was in the hands of Maybe and his team. Vici Gaming understood that and surrendered.