It's the title contenders against the last hope of Southeast Asia.

Puppey picked Meepo for MidOne. Team Secret's four heroes aggressively entered the opponent's forest before the horn and made two kills when the creeps came out. The game was marked by a good team play from both teams. The heroes died for both team, but farm and gold advantages remained for Mineski. Before midgame, Secret played rather absent-mindedly, but then there was a fight at Roshan, the teams suffered serious losses with buybacks, but in the 22nd minute the fight near the lower T2 tower ended up with Puppey's team victory: five kills against two. But in the 25th minute, Mineski had a great fight at Secret's base. They demolished the lower racks and the middle tower. Mineski's domination began. MidOne was dying over and over again. And so, Mineski attack the enemy base, break faces and all the barracks, but by some miracle, Team Secret kill four enemy heroes including Alchemist without a buyback. Puppey and his companions run to the enemy's base and demolish the throne. 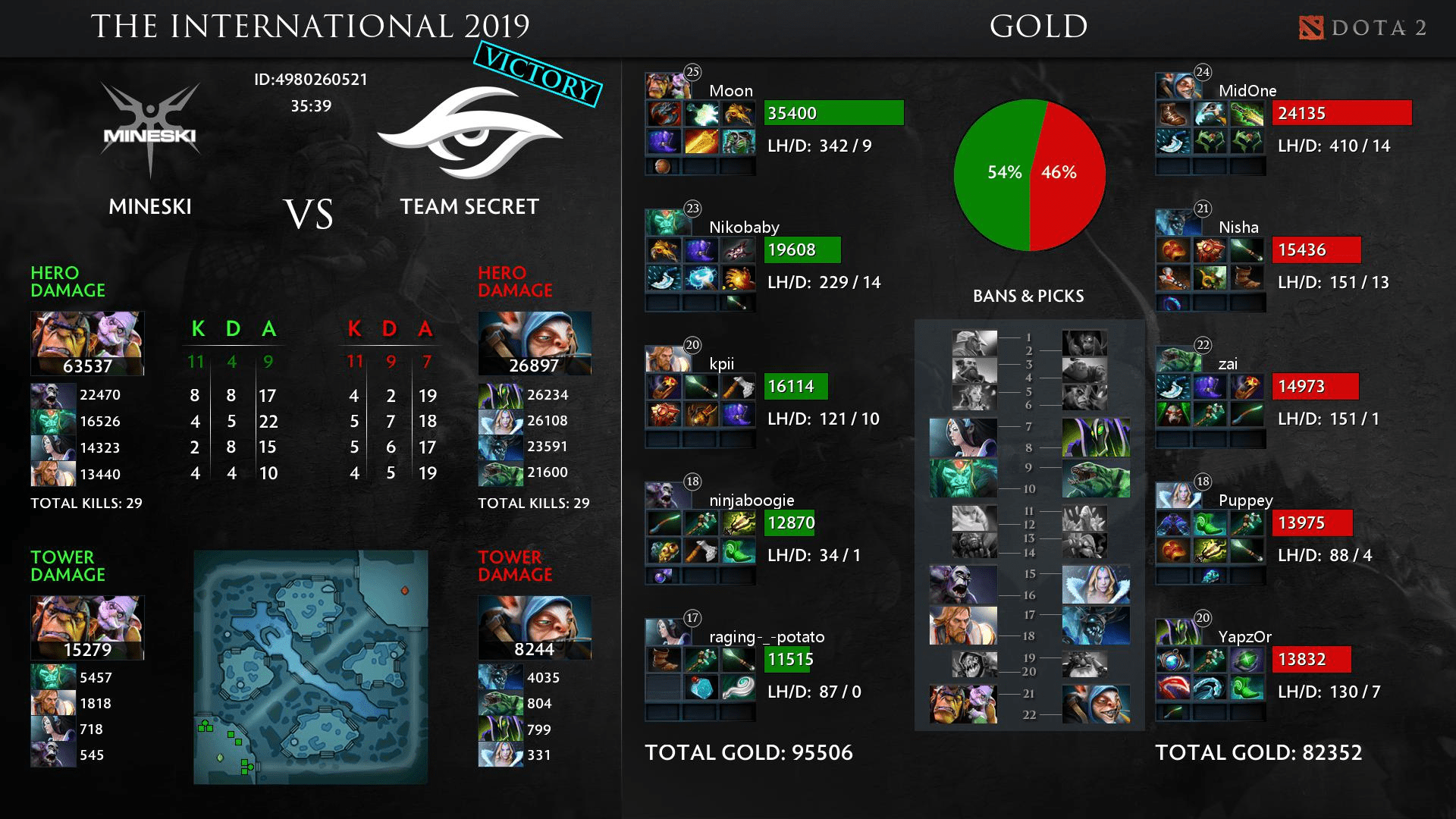 The second game started calmly. Mineski took the lead, Secret were suffering under pressure. By the tenth minute, the gold advantage was on Mineski's side: five thousand plus. Moonn on Lina was the top of the networth, followed by kpii's Enchantress and Nikobaby's Void, and only then there were Secret's heroes. In the 14th minute, Mineski caught three enemy heroes and dealt with them. TS' midgame was still just as bad. Closer to the 20th minute, Mineski tried to enter the base but did not have enough power to succeed. TS' counterattack also failed: cores dead, retreat needed.

In the 24th minute, Void's unfortunate chronosphere cost Mineski four deaths - MidOne makes an ultrakill with his Storm Spirit. 30th minute: a difference of 15k networth and 9 kills in favour of Southeast Asians. They took Roshan, killed three TS heroes in the mid, went to the top and broke one barrack. Five minutes later, the difference in gold was already 22 thousand. But suddenly, in a fight in the Dire forest, Puppey's team makes four kills and runs into a counterattack. It looks familiar... Mortred with DD is just crazy. Secret managed to destroy T1, T2 and T3 towers and a barrack in one counterattack.

After that, both teams decided to farm. Up to the 50th minute: a fantastic fight exactly in the centre of the map, two domes from Void, one from Rubick, TS killed their opponents, three bought back and died immediately. Team Secret bursts into the enemy's base, we saw more domes from Rubick and Void but Storm, PA and Ogre died after buybacks. Mineski attacked fully armed but without Lina, who was in the tavern. Tiny enters the fountain, distracts attention, Mineski beats the throne and Secret didn't have time to oppose anything without the cores. GG! 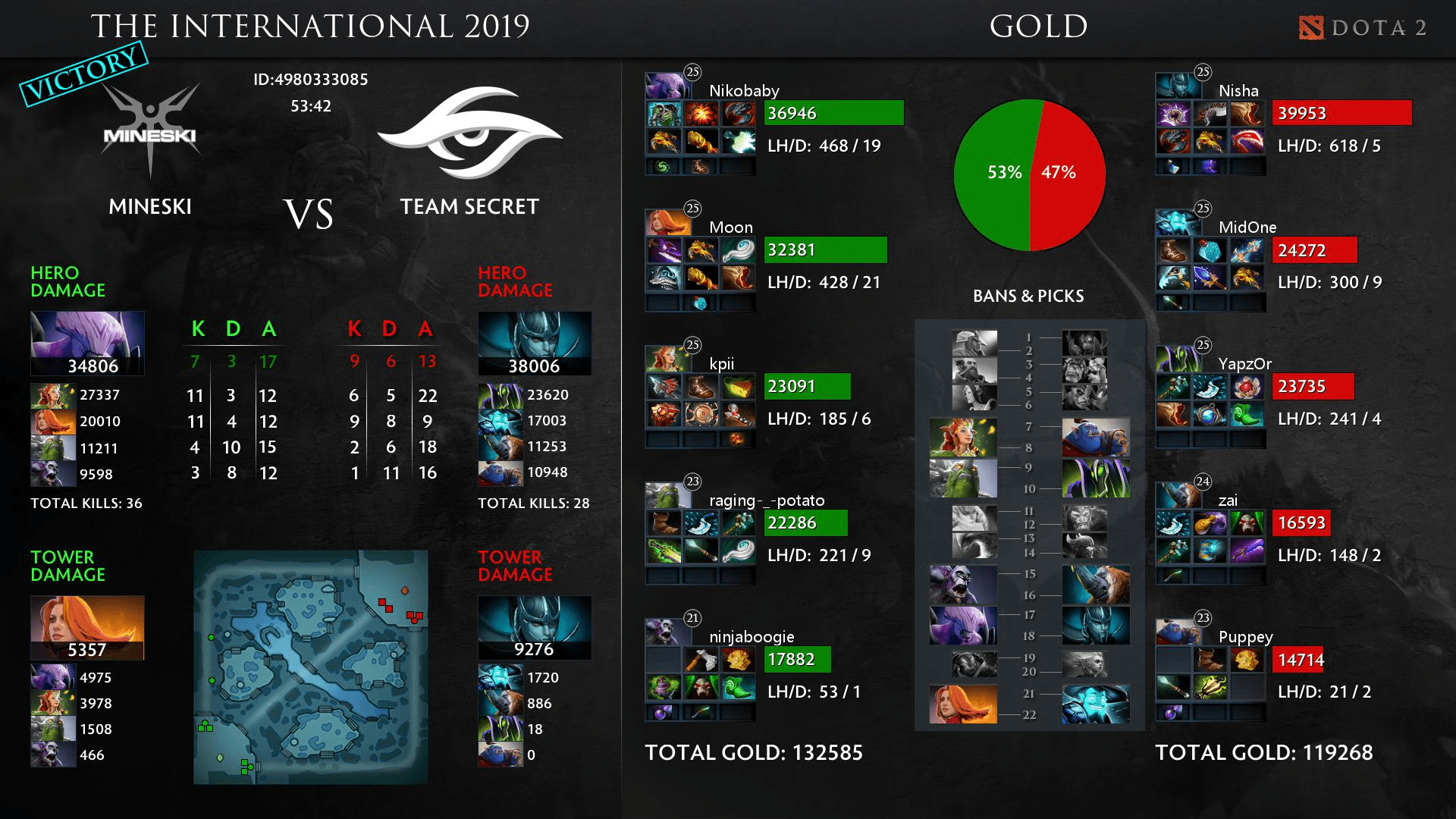 Mineski started the game aggressively. Their pick implied constant attacks on the opponent, and they did it. At the 12th minute, the first serious fight occured. Team Secret won it without any problems, only two Mineski heroes were able to escape. The fighting Void became the key idea of their game, as TS had to respond to Mineski's pressure. Closer to midgame, the game calmed down, because, after a fight, Mineski found out that they needed artefacts. At the 22nd minute, there was a big fight near T1 tower of Secret's top lane. And Puppey's team in excellent style sorted it out. 14-5 was the score, 7k difference in gold — TS was leading it.

The European team overfarmed Mineski and, right before the half-hour mark, in a difficult battle, it seemed that they defeated the South Asians, but they bought back and launched a counterattack. As a result, five Secret's heroes were dead, Mineski took Roshan. TS entered the opponent's forest using smoke in the 31st minute but didn't see anyone, though they initiated a fight in the centre. Having received a lot of damage, Secret managed to fantastically escape, still, the pursuit did not stop. Mineski caught their opponents, killed Rubick, Void and Omniknight. They didn't go to the base as they spent too much effort and the risk with no buybacks wasn't worth it. At the 40th minute, a long fight happened when TS attempted to take Roshan. As a result, the teams got tired of the chase and parted.

But then, the teams clashed in a long and tough fight. First, Mineski bit Team Secret in the middle but not completely: the heroes were too thick. The battle lasted about five minutes, buybacks and teleports were used, Void cast several domes and WK resurrected a couple of times. But a well-coordinated and clear game from Puppey's team still allowed them to prevail. It was a fight not about mistakes, but about who was the strongest. In the end, Mineski died. Secret came to the base and took down the throne.

And after the game, Nisha, smiling all over his face, left the arena. 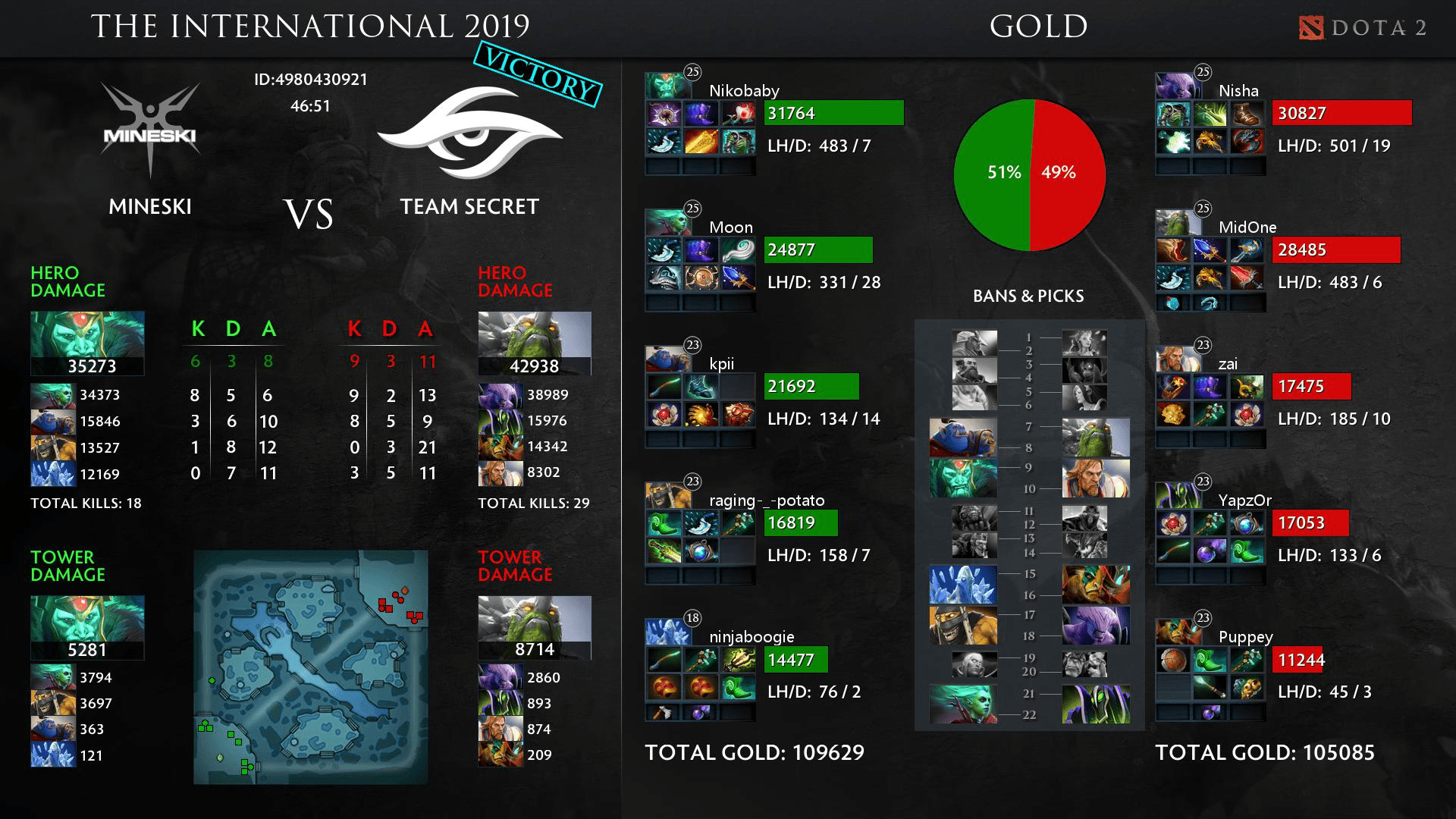