The first match of the day was the lower bracket's Infamous vs Newbee meeting. The Brazilian team has made it through Group Stage successfully and then beat Keen Gaming in Best of 1 elimination match. Newbee got defeated by OG in the upper bracket. The winner of the match will meet with Team Secret/Mineski.

A quick and tense map. Hector got his signature Wraith King, Chris Luck played on Monkey King, while YawaR farmed on Sven and CCnC did damage using Leshrac. You should have expected a long game with WK farming and coming out of the woods somewhere near the half-hour mark, right? But no. 25 tense, very eventful minutes with Monkey King killing everyone and everything, Hector plugged in time and wonderful RPs from Wisper - such things are simply impossible to counter. The Brazilian snowball swept Newbee and they wrote 'gg'. 2 minutes of highlights will explain everything: 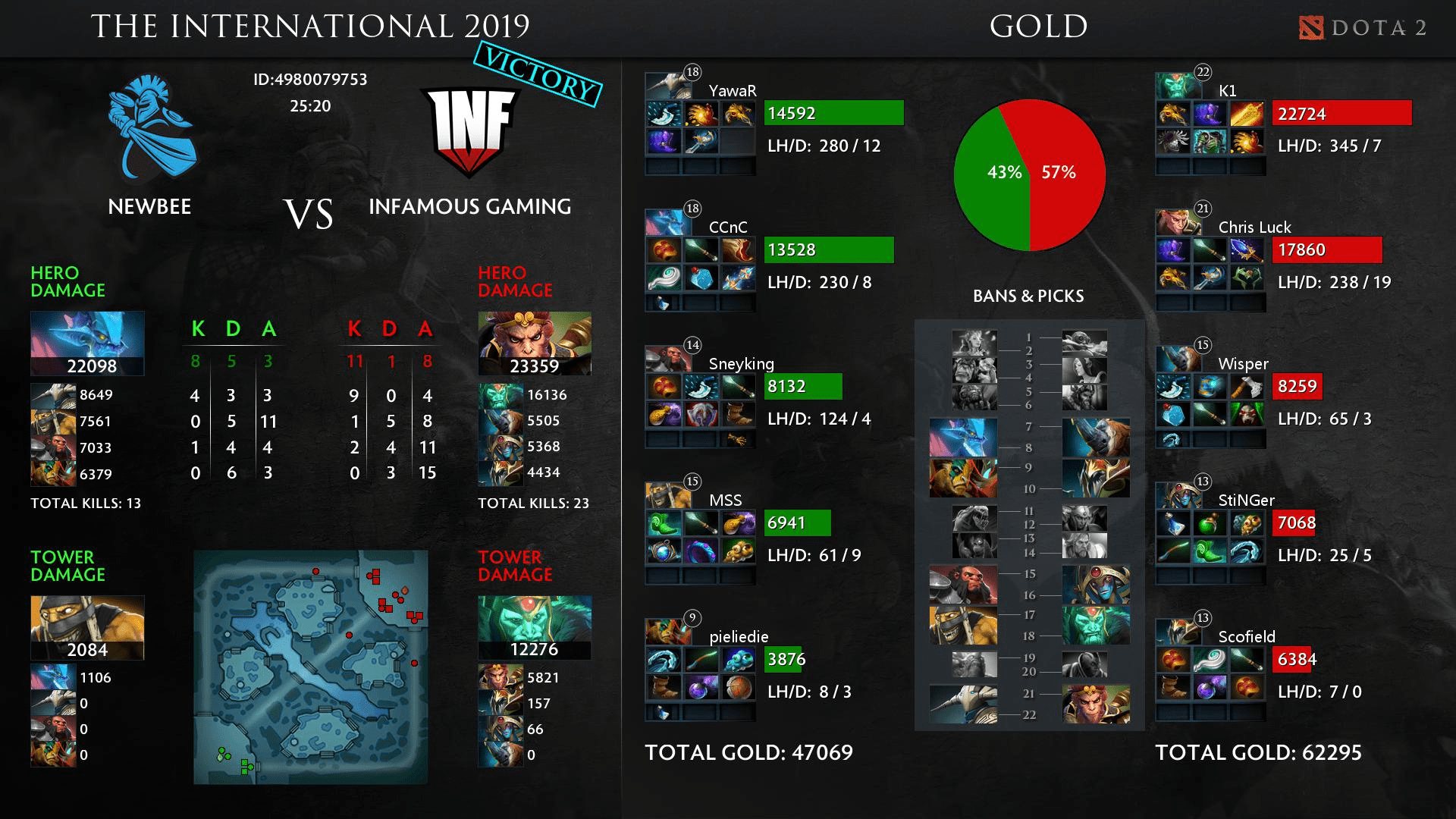 Infamous imposed aggression in their style. It was a fairly equal game in terms of activity and kills, with the difference that  Infamous ganked well, but sometimes they were mistaken for what they died. The match calmed down a bit by the 20th minute, Juggernaut had to farm, Infamous sat deeper and were attacked by Newbee. LS and OD went ahead in terms of gold, and in the first serious fight 5v5 at the 27th minute, they easily dealt with their opponents. CCnC and his Outworld Devourer were simply unstoppable. A lot of damage dealing and impossible to kill him - the Brazilian team had fewer and fewer chances with every minute of his farm. Jugger was dying from CCnC's ultimate in a moment. At the 35th minute, Newbee entered the enemy base, and Infamous could not do anything. Another five minutes of attempts to defence, the decisive fight happened but the Brazilians' damage was critically low - and they give up. 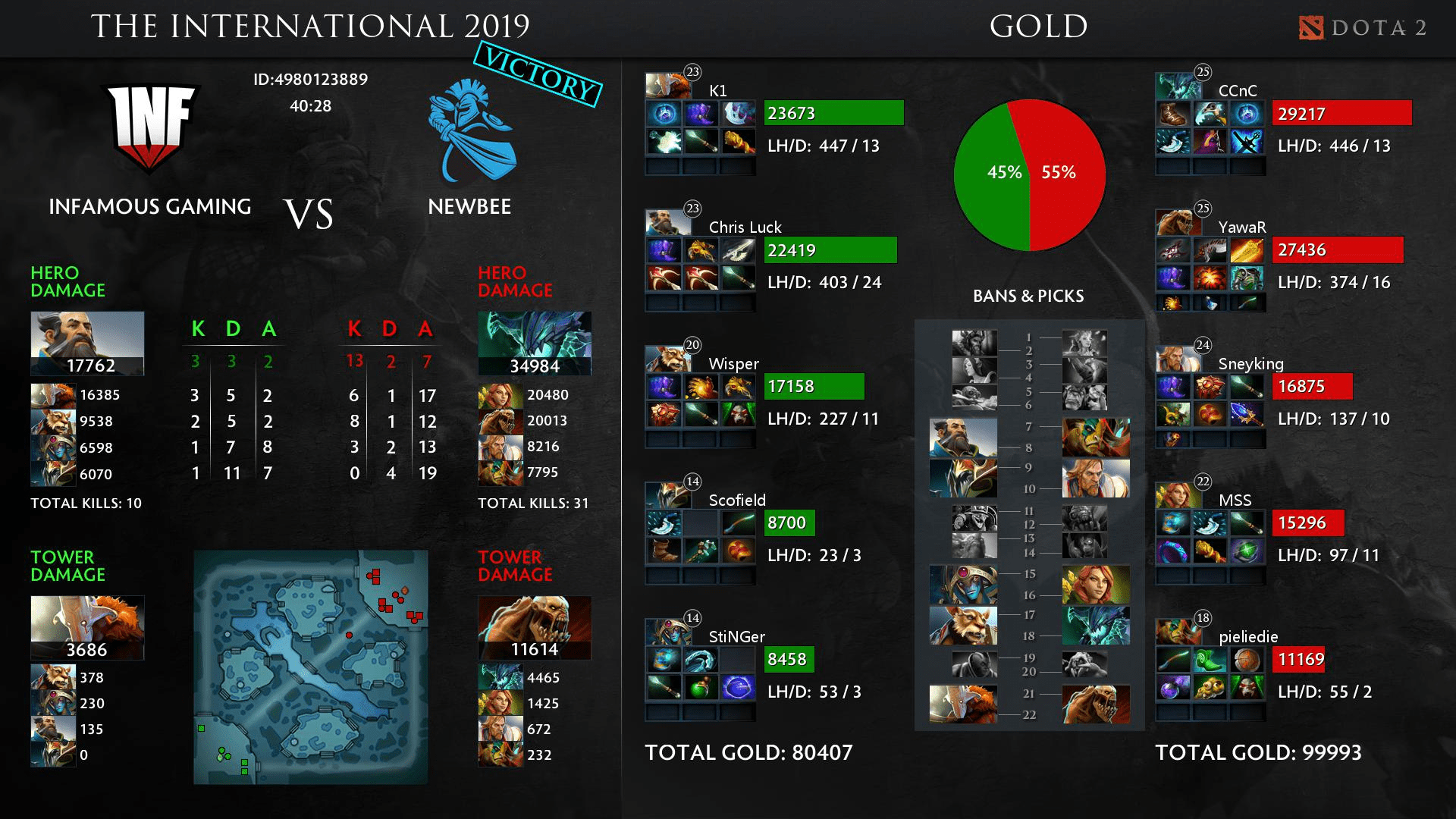 Signature Slark and WK for Infamous. CCnC got Kunkka, MSS played support Invoker. And again, an intense game with lots of micro moments. Slark both killed and was killed as the Brazilian team was creating space for Hector (guess who he played with). The four of them caused a lot of troubles to the American team. Meanwhile: 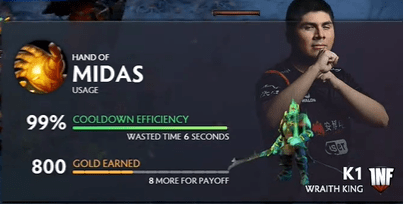 In the 19th minute, there was a major fight near Newbee's base, WK came and ... died. Solo. Infamous retreated. Five minutes later, there was a battle in Newbee's forest: they wanted to kill Slark using smoke, which they eventually achieved, but the teammates who arrived in time to help Chris Luck destroyed LS, Kunkka and Elder Titan. Then, the clash continued on the upper Radiant shrine, where the fight dragged on, we saw an incredible escape from Slark and Earth Spirit, a symphony of skills from Newbee, but Infamous simply couldn't finish it. As a result, with losses on both sides, the teams diverged, and after a couple of minutes, Infamous took Roshan. In the area of the 35th minute, Newbee's five chased Slark near the former T1 tower on the top line. They spent a few minutes and didn't kill Chris Luck. At this time, the four heroes of Infamous were breaking the enemy's base. Newbee woke up when the T3 tower had fallen, ran to the base, fought hard, but still lost two lanes, and Infamous retreated. After a couple of minutes, Infamous regrouped in the enemy forest, made four kills including Lifestealer. The Brazilian team entered the base, broke everything, closed the enemies under the fountain. GG was not long in coming. Infamous reached the top 8 of The International 2019! 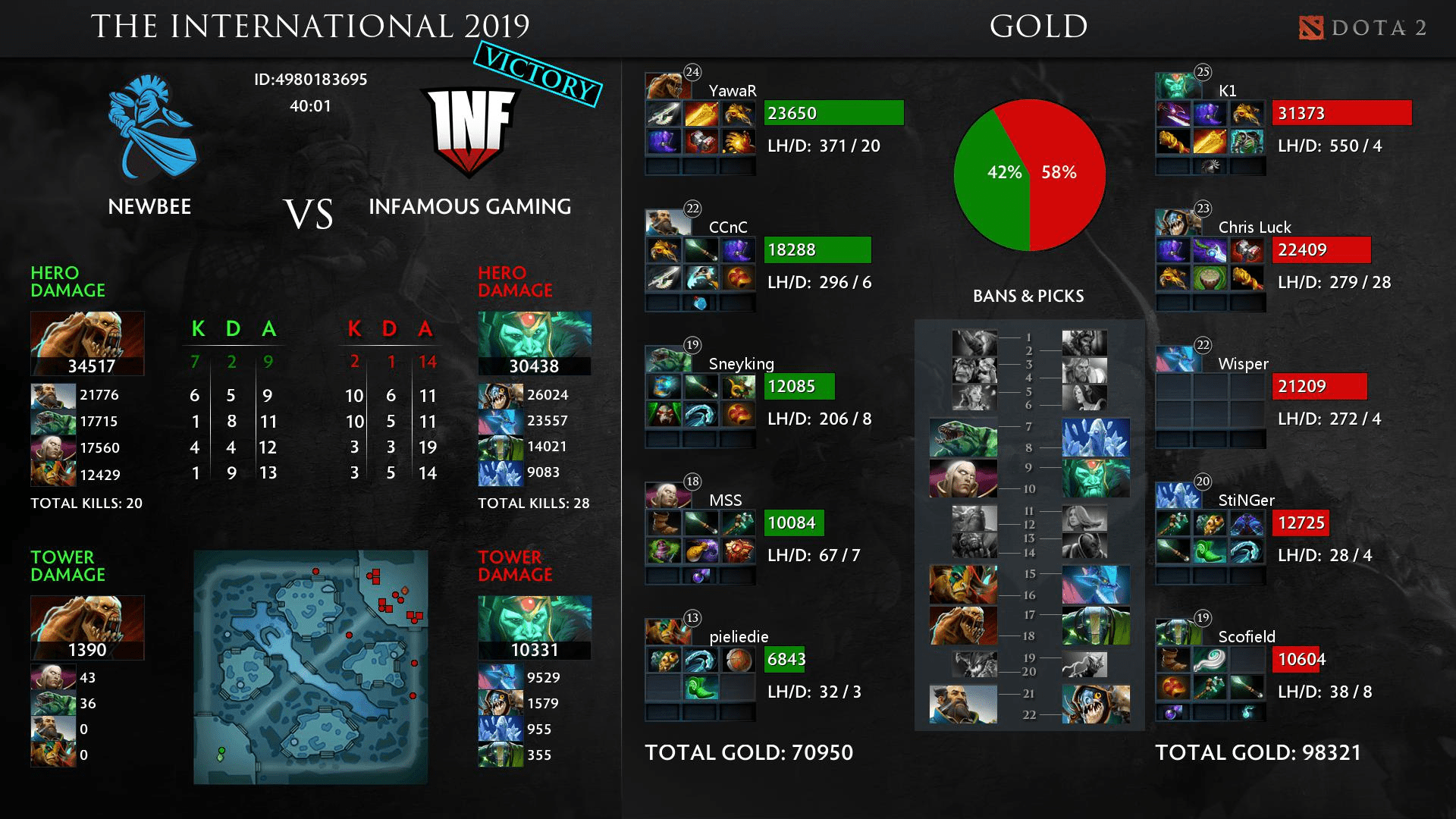