We watched the last decisive match of The International 2019 and two strongest European teams of the Dota 2 world — OG and Team Liquid. All the games are worth your time, but we're here to save it and tell you about the match events in short.

Traditional first blood for Team Liquid on Elder Titan, and they started to dominate the map from the start. First Roshan was easy for Liquid with 4k gold advantage at 17th minute, so was the fight near Tier-2 on mid. The formidable Meepo got Eye of Skadi, Silver Edge and Ethereal Blade to the half-hour mark. Even ana with BKB couldn't compete with this horde.

At the 37th minute, OG lost both barracks in the mid and was forced to use buybacks. A short break helped the team to get another Roshan, but Team Liquid was able to win a significant fight and catch Aegis. After Miracle- got the Nullifier, there were no chances of OG's returning to the game. Using buybacks, Liquid killed the enemy in the final clash at the enemy base and destroyed the Ancient. 1:0 for Team Liquid! 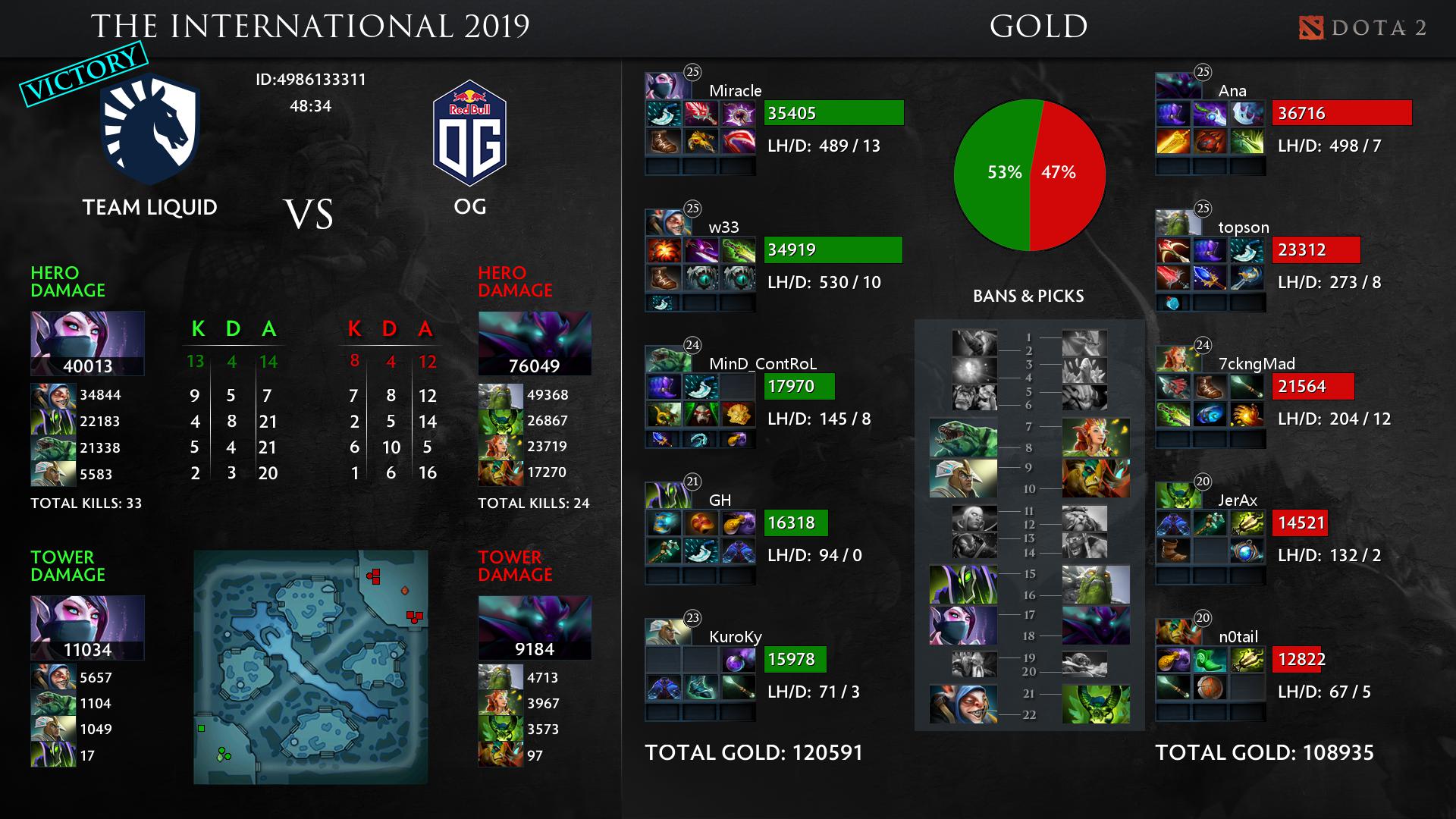 Tidehunter, trying to kill N0tail, died himself - first blood for OG. It was easy mid for Topson on Monkey King against Templar Assassin with a lot of farm. Miracle- suffered on the bottom lane from Tiny and Omniknight. The slow farm grew up to epic fights on Liquid's top and mid, where OG showed their good skill but got the punishment in a team wipe from the rival on 11th minute.

OG used the aggressive playstyle with fights near the opponent's base on 13th minute, killing Tidehunter and Enigma. They seized the map, controlling the score, gold and fights.

Liquid was cornered on the base at 28th minute, and OG got 32:10 score with 21k gold advantage. Topson showed Godson and made an epic Rampage on the mid. Another great fight and 1:1 for OG! 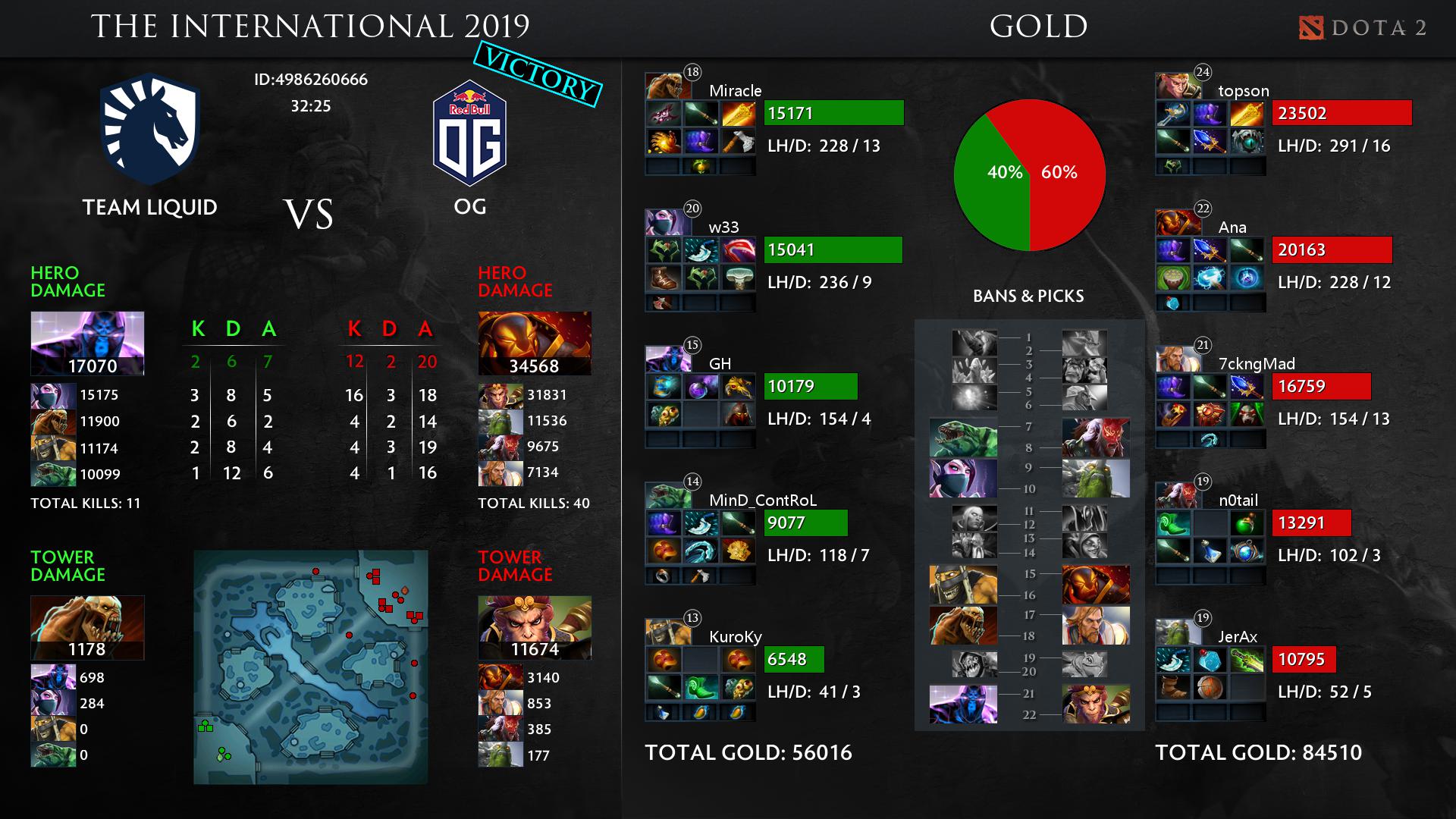 We saw the repeat of the second map: full OG's control and domination. The 25:8 score with 6k gold at 17th minute — everything was perfect for OG, especially for their carry Topson and JerAx.

All that have left for Liquid is to stay near the Ancient and watch the fastest 23th-minute defeat. 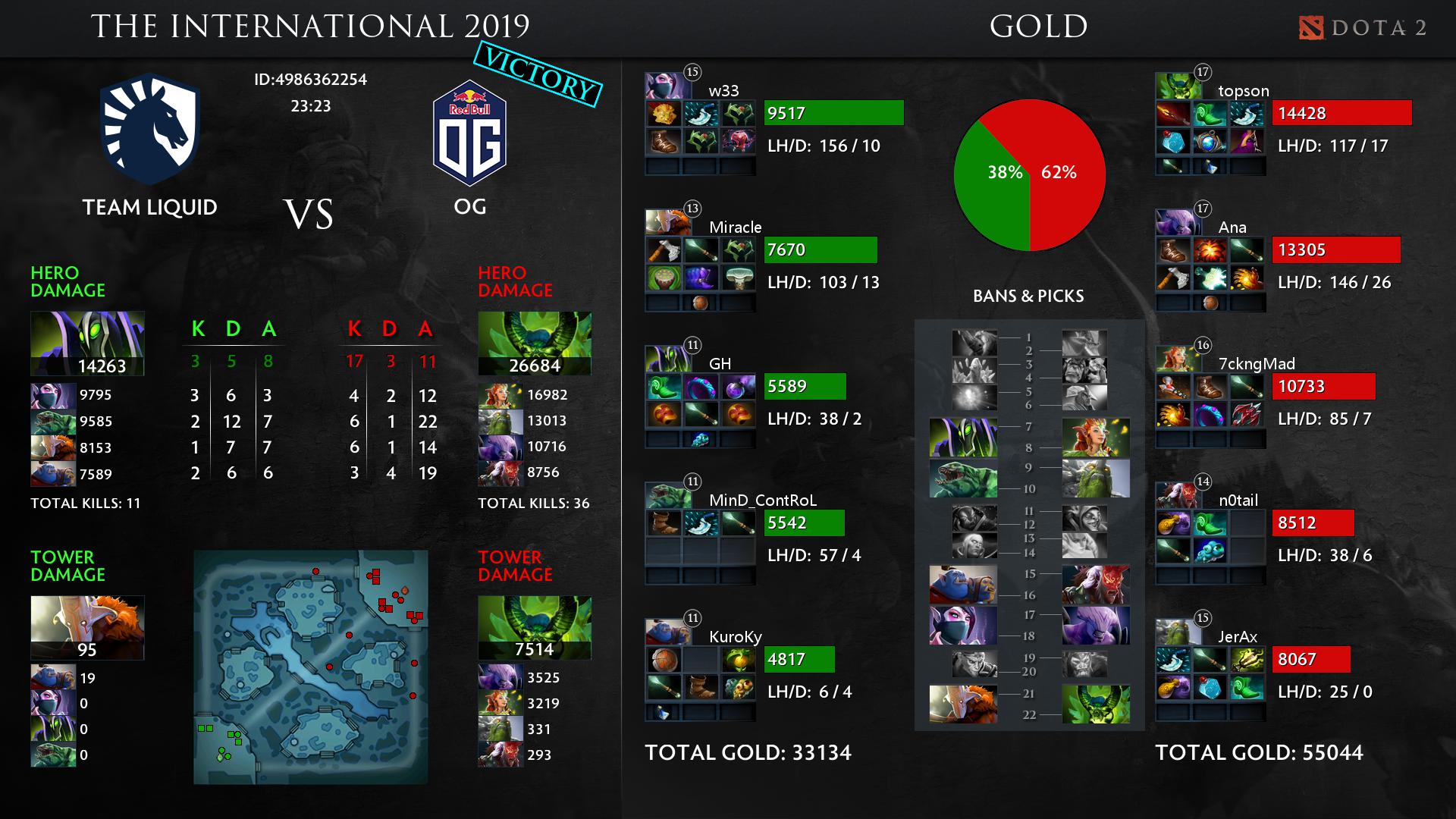 OG took first blood on KuroKy. But Liquid found their pace and showed a fair game. They understood that the power is in unity and went to fight with 3-4 heroes. The most exciting line was bot with the pair IO-Abaddon and Bristleback with two supports. The tight fights and chases: Miracle- led the net worth ranking.

And then: we honestly didn't know how to follow all the fights spread on the map. First, OG won the battle on the mid, next - Liquid follows the opponent to the base and won the fight in their turn. OG was waiting for the critical items: surprise - Diffusial Blade for Gyrocopter.

After Roshan at 20th minute, Liquid entered OG's base but lost Windranger and Miracle- twice. Two minutes later, we saw OG on the rival's base, destroying Tier-3 and Liquid's faith in the fifth map. 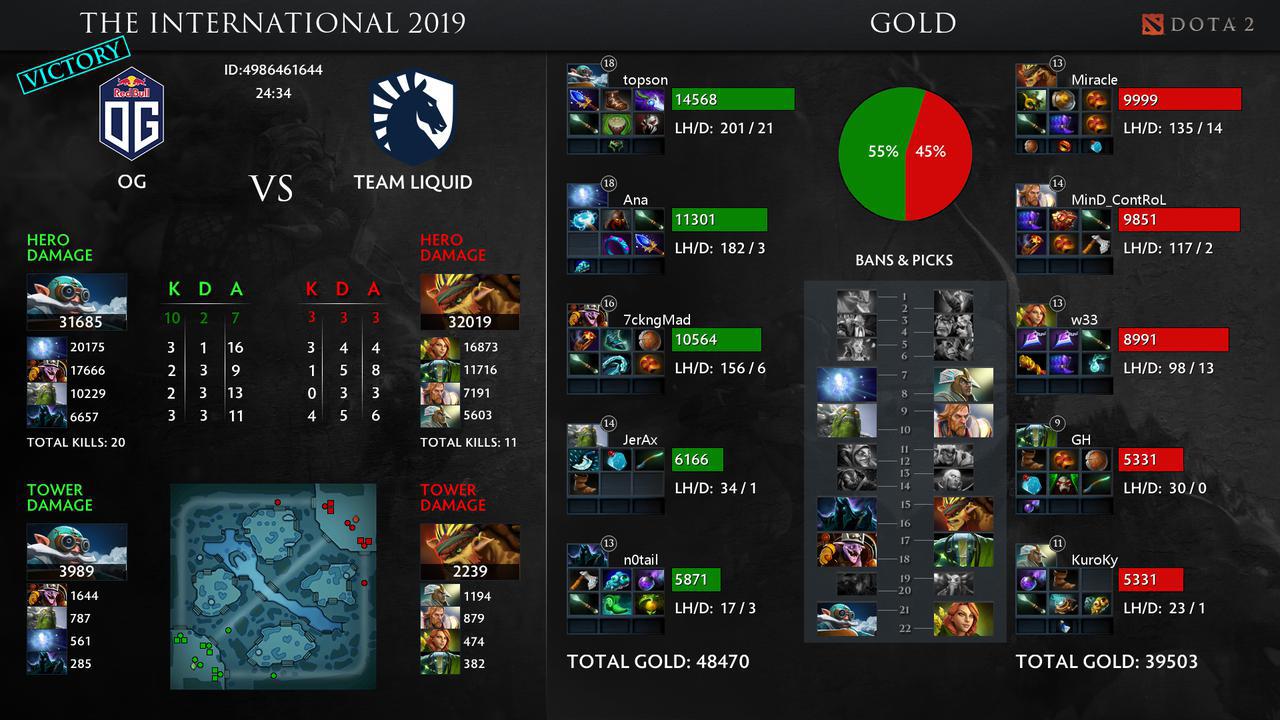 You should remember the names of the double-time Dota 2 World Champions: 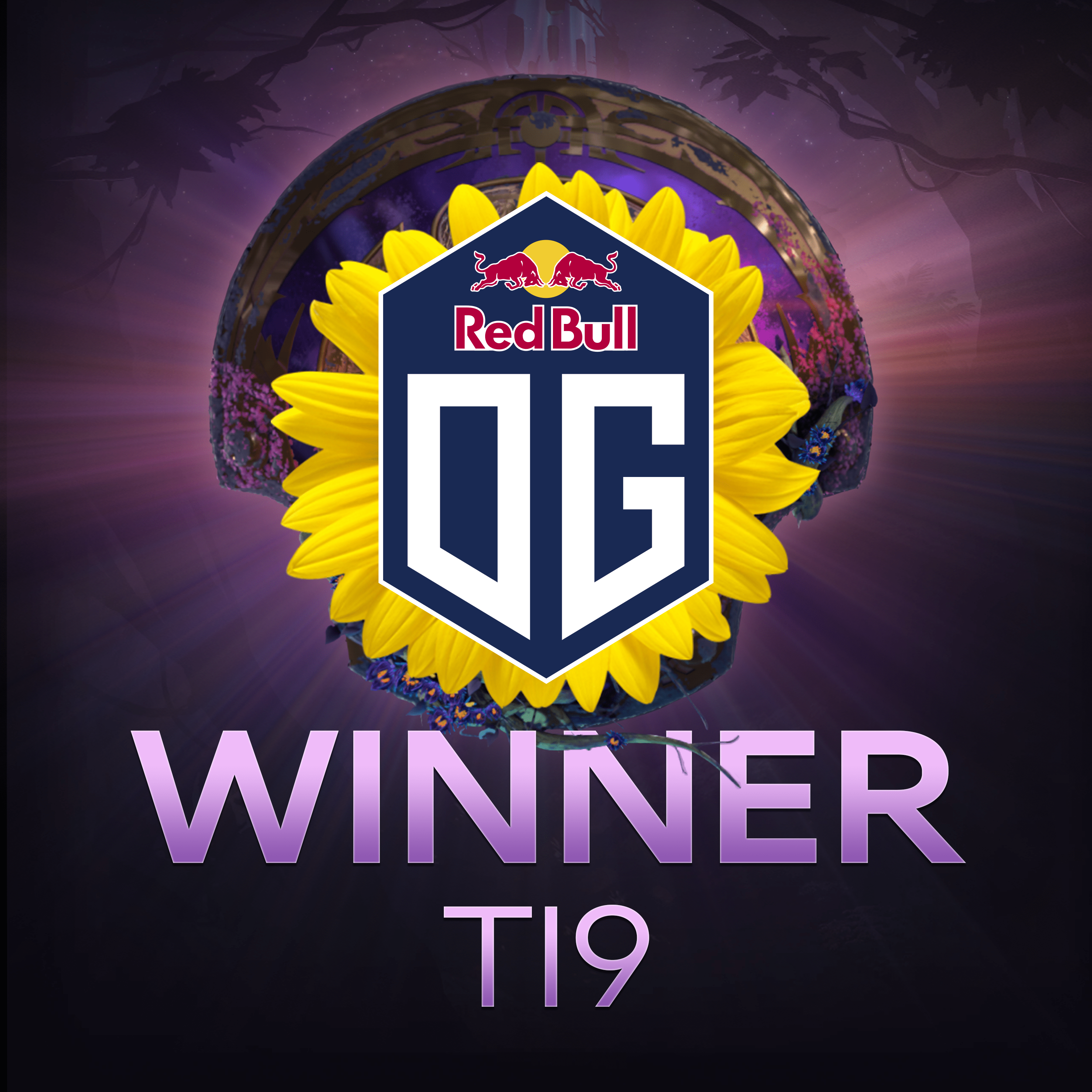