The Worlds 2019 Quarterfinals bracket is set

The Worlds 2019 Quarterfinals bracket is set ⚡⚡⚡ Esports and gaming news, analytics, reviews on WePlay! The latest news on WePlay!

The 2019 League of Legends World Championship Group Stage has ended, with all three South Korea’s LCK and Europe’s LEC teams making it to the Knockout Stage. The last two spots were won by the first and third seeds of China’s LPL.

Invictus Gaming managed to defeat Team Liquid to secure themselves the final spot in the Quarterfinals and will now be facing Griffin when the Knockout Stage begins on October 26. The first seeds for each group were assigned four random corners of the bracket. These pool 1 teams are SK Telecom T1, Griffin, DAMWON Gaming, and FunPlus Phoenix. Pool 2 teams finished the Group Stage as second seeds and were assigned opponents while making sure that no two teams from the same groups are paired with one another. 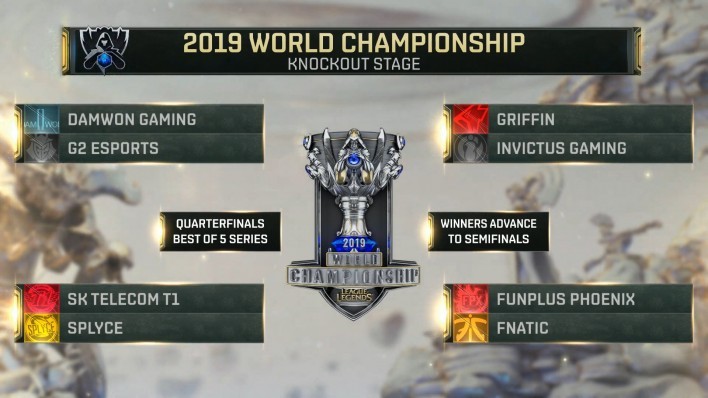 Griffin was destroyed by G2 Esports in Group A’s first round-robin but made a great comeback in the second. Going undefeated, they became the first seed with G2 coming up second. FunPlus Phoenix topped Group B 5-2, but still had a rough time of it. Splyce followed close behind to take second place.

The first LCK seed, SK Telecom T1 put on a strong display, winning the Group 5-1, while Fnatic struggled in the first round-robin but went undefeated in the second. SKT’s only loss in the Group Stage was to them. DAMWON Gaming, the LCK’s third seed only lost a match to the LCS’ Team Liquid in Group D. However, Invictus Gaming managed to steal the second-place spot from Team Liquid just in time to qualify for the next stage.

Next weekend, the Worlds 2019 Quarterfinals will take us to Madrid, Spain. The second match of the day will have FunPlus Phoenix facing Fnatic, while the next day will have DAMWON Gaming take on G2 Esports and SK Telecom T1 meeting Splyce. The Quarterfinals will take place at Palacio Vistalegre and will feature a best-of-5, single-elimination series. The Semifinals will also take place in Madrid during the first week of November, while the Grand Finals will be held on November 10 at Accorhotels Arena, Paris.