The Grandmaster gear upgrade is definitely one of the best things which you can do in The Witcher 3 right now. In fact, this new upgrade got introduced when the Blood & Wine expansion came out. Apart from looking very cool, this gear also provides you with two unique set bonuses. Also, let's not forget about the higher quality and level.

Regardless of which type of gear you choose, the process of upgrading is the same. First, you need to find the diagrams, followed by the needed materials and then find a Blacksmith who is willing to craft the gears. However, it is very important to know that the Grandmaster gear is pretty expensive to get, especially if you are not into grinding the materials. The only other way of getting your hands on them is by buying them from merchants and as you know, they charge a small fortune for it.

In order to begin your journey, you need to talk to the Grandmaster Smith who is located in southern Beauclair. Once you do, he will start the so-called "Scavenger Hunt" quest to find the Grandmaster Version of the Wolf, Cat, Bear, and Griffin school gear. 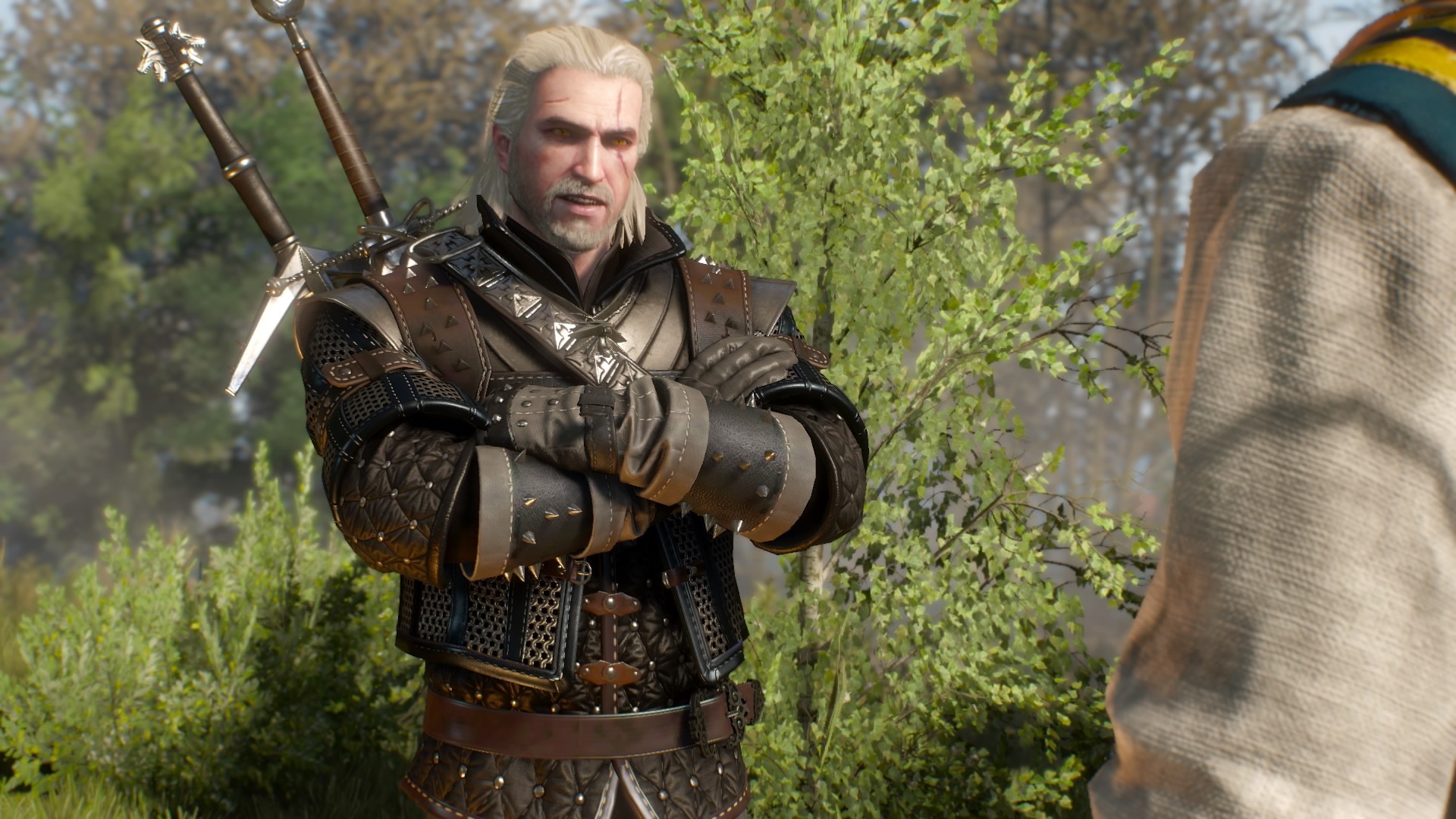 The first set on our list is the Grandmaster wolf. As we mentioned in our overview of this set, the Wolf gear is awesome because it gives you all the essential stats, making it the best all-around set. However, it is not excelling in anything, which means that it is definitely not going to suit everyone, especially those of you who are into using their signs a lot. Despite that, it is still one of the best looking gear in the game right now, which is enough for most people.

In order to start your quest, you need to go to Grandmaster Smith mentioned above. From there, you need to travel to the archaeological campsite which you can see highlighted on the map. Once there, you need will see a big portal and a room behind it - this is where you need to go. In order to open it, search for a small Purple Ruby somewhere close to the portal. It is generally found inside a nearby corpse but some people also claim that they've seen it on the ground.

When you find it and open the room, be prepared for some action because there will be a lot of enemies there. If you kill them, use Aard to brake the big wall there and follow the path. After a couple of seconds, you will end up in a big chamber that contains all six diagrams of the Grandmaster wolf set.

You will get the following bonuses from this set: 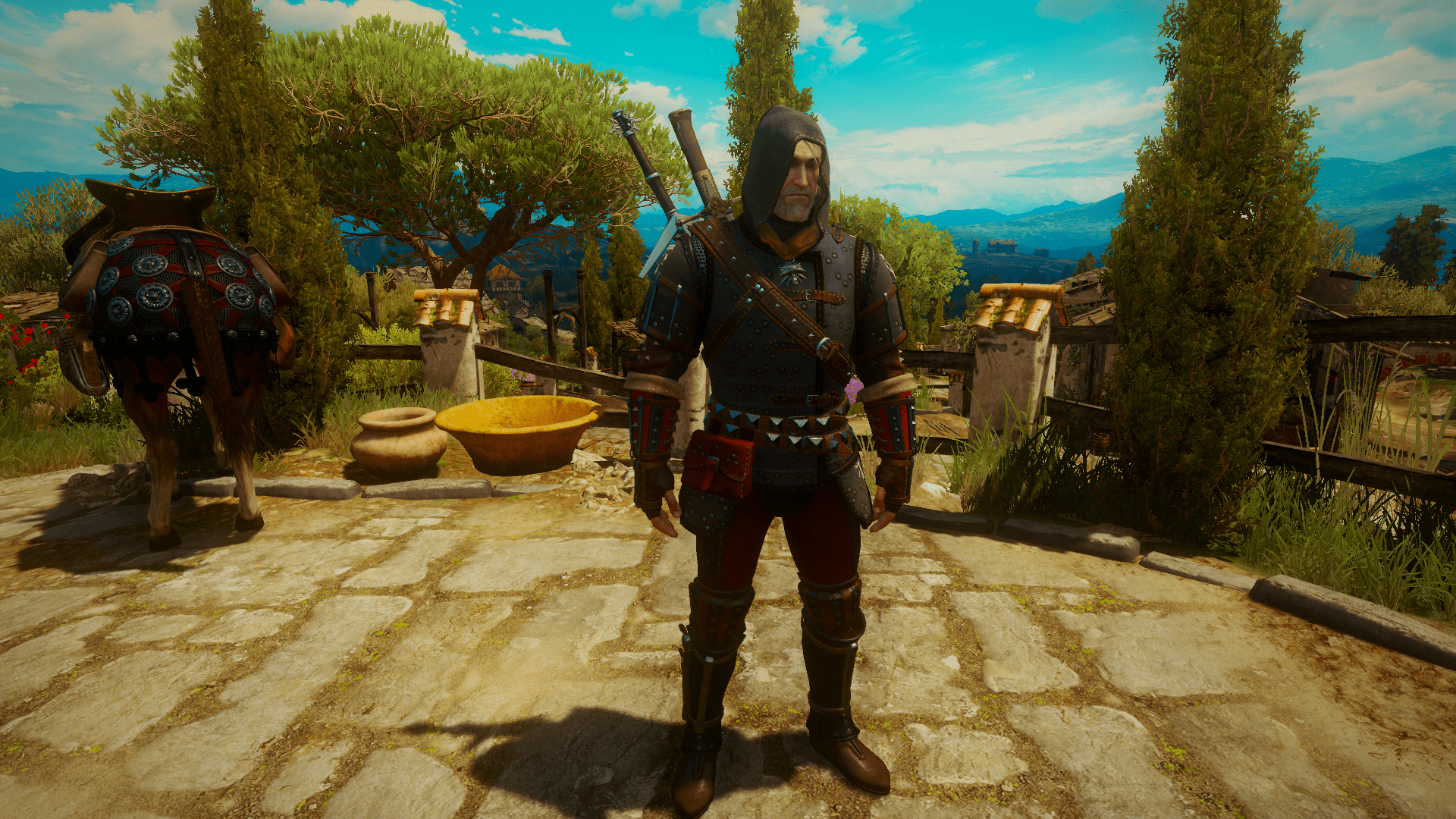 The Cat school gear may not have as good stats as the previous set, but it is very light, which makes it a perfect choice for all players who like to dodge the attacks from their enemies while combining this with a fast-paced attacking play style.

In order to get the Grandmaster version, you need to go to Beauclair once again and take the quest. Once ready, follow the quest path which will take you inside a big estate where you have to deal with a couple of enemies. When you're done, go into the big red house and search for painting on one of the walls which will contain the diagram for the Feline armor. In addition to it, there will also be a hint about the next diagram.

The next location is a bandit camp close to where you found the first diagram. However, be careful because there will be a lot of enemies there and even though they are not that hard to deal with, their number is scary.  Upon defeating them, go into the tower right next to the camp and you will find a chest that has two more items from the set and a clue for the next location.

The last place you need to go to is a cave. The good thing is that there are no enemies here, so all you need to do is go and get the last three diagrams.  After that, go back to the Grandmaster smith where you've picked up the quest. He is the one who will be able to craft your gear.

Here are the bonuses which you can get:

As you can see, those bonuses are definitely worth all the troubles you have to go through. Just imagine your DPC once you get this set. 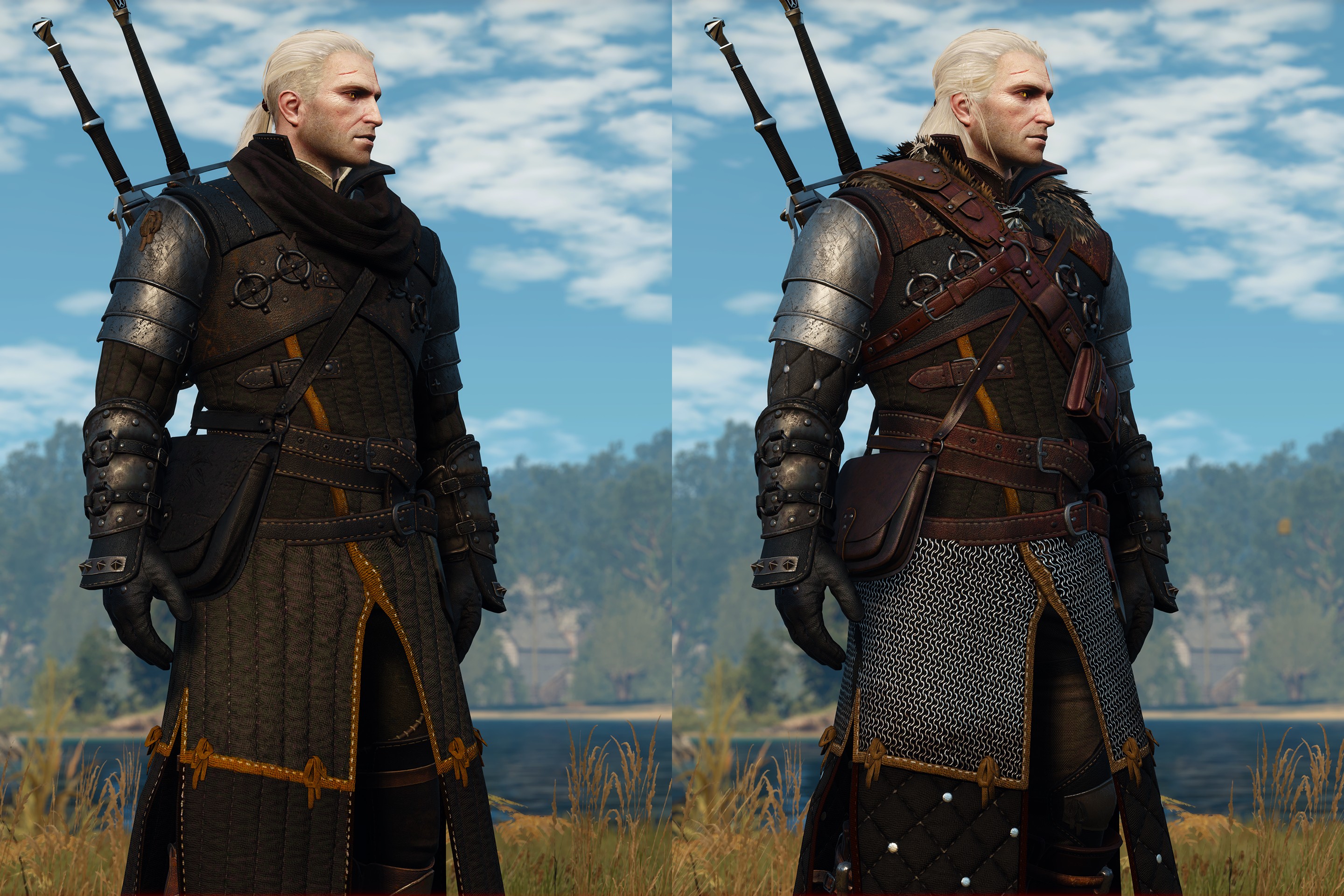 The next gear set on our list is Ursine, the go-to option for every player who loves to tank some damage. It includes a lot of heavy armor and good weapons but the price for this is the lack of swiftness. However, if you are one of those guys who likes to soak some damage, this is definitely your best bet.

If you manage to get the Grandmaster gear, you will be able to earn the following bonuses:

In order to start, head to the Grandmaster Smith in Beauclair and take the quest. Your first challenge will be to break a big wall that blocks the entrance to the cave. The easiest way of doing this is by using the Aard sign.

Once inside, look around a little bit and you will find the diagrams for the Grandmaster's silver sword, gauntlets, and armor. In addition, there will also be a journal that serves as a clue towards your next location. Strangely enough, it is yet another cave with a blocked entrance.

As soon as you used Aard to clear the way, follow the main path inside it and it will lead you to a corpse that contains the last three diagrams. After you get them, head back to the Grandmaster Smith who will craft your Ursine set. Oh, and be sure to have the needed materials because as we mentioned, they are way too expensive to buy. 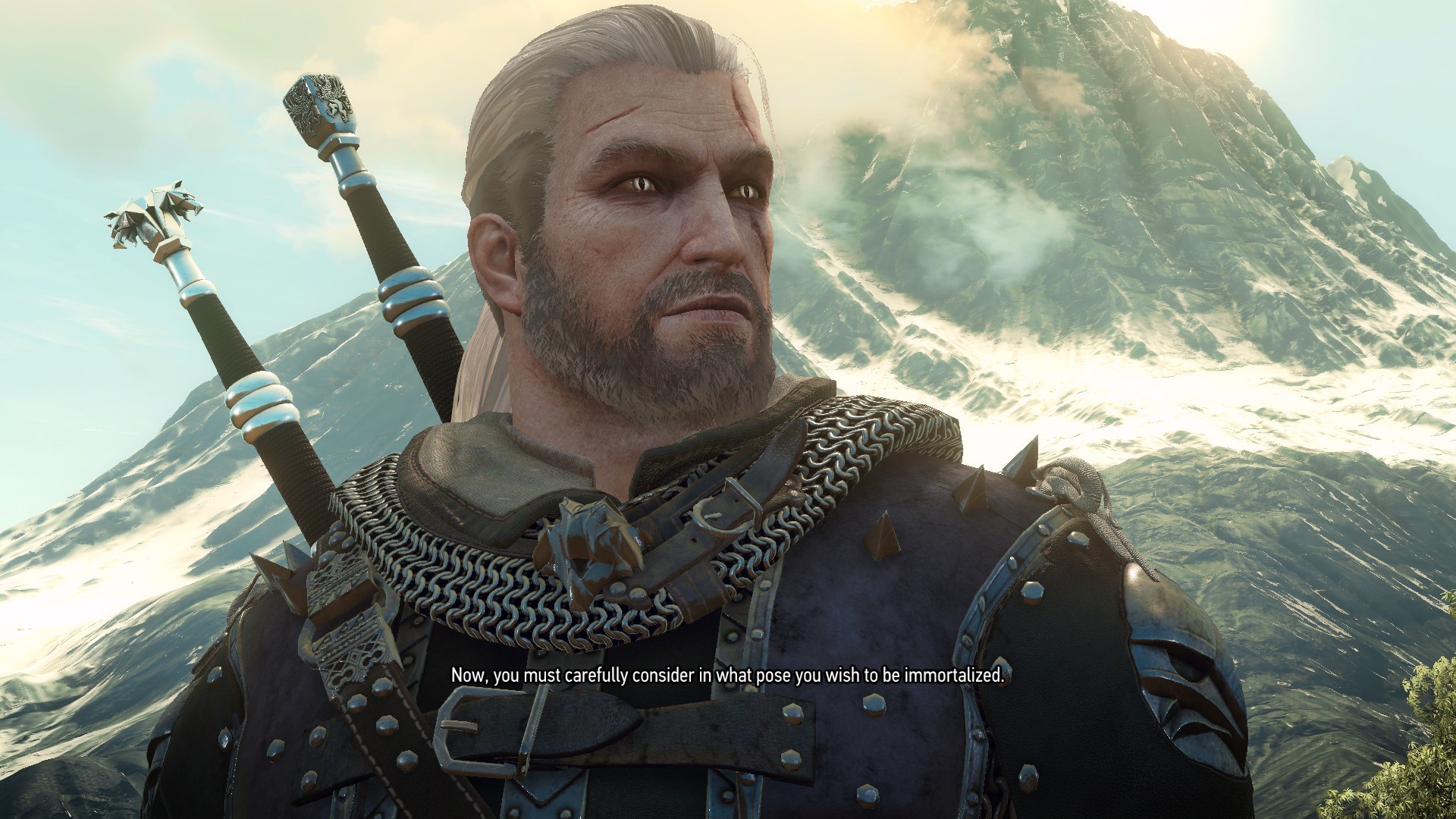 The Grandmaster Griffin Gear is a little bit harder to get compared to those which we just covered. However, it is definitely worth the hassle because the bonuses which you get are awesome:

Similar to every other gear before this one, you need to start by going to the Grandmaster Smith in southern Beauclair. Once there, he will begin the Scavenger Hunt quest.

Upon starting, head over to the location which will be highlighted on the map - Fort Ussar. As you probably know, there will be a lot of guards there which makes going inside not the easiest thing in the world. Prepare to go up against two basilisks who are more than capable of bringing you down. Having said that, it is possible to sneak behind them but it will take too much time so it's better off to just fight them.

Once done, go inside the fort and you will find the chest which contains a diagram and a clue for the next location, which is a camp controlled by bandits. When you are done killing them, you need to dispel the illusion which is blocking the entrance and then go into the room below. Use a big wall switch near the entrance which will allow you to enter a secret room where you will find a bonus quest - finding a teleportation crystal.

After you find it (it is very close), you need to place it into the apparatus and enter the portal. Inside, you will find the Grandmaster Griffin trousers, armor, and silver sword diagrams. However, they are guarded by a giant Golem who is a bit tricky to beat because he does a lot of damage.

There are several different tactics that you can choose from but it seems like the classic "hit-and-run" is the way to go here.

When you get all the components, head back to the smith who gave you the quest. Just don't forget to also get craft materials because they are very expensive. Of course, if you have a lot of money you can save yourself tons of time by just buying the things from the vendors. However, chances are that this is not the case. After all, The Witcher is not really known for its great money-saving mechanisms.