The second day of The International 2019 was not so different from the first one in the intensity and struggle. And there was a minimum number of delays. 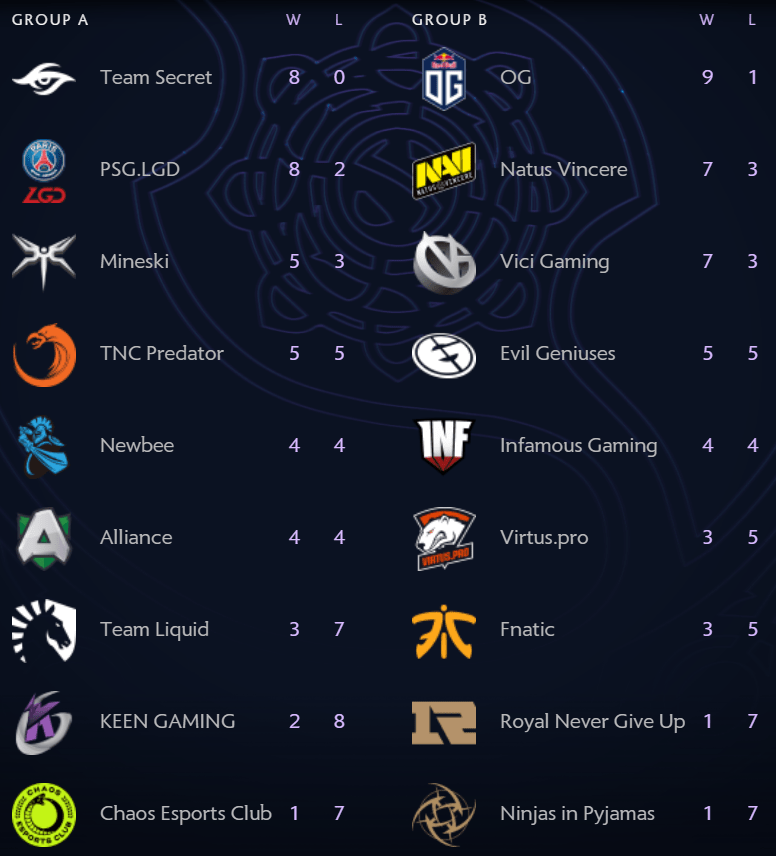 Group A today had a light schedule: the teams played only two rounds, and two of them got one match.

Team Secret and PSG.LGD continue their trip to the top bracket: each of the favourites has 8 maps won, and they show an extremely confident game.

You don't need to worry about the Puppey's and fy's guys: they have very great chances for top 4. But the remaining seven teams continue the uncompromising struggle for two trips to the top bracket. Surprisingly, Mineski having Mushi as a coach began to show effective play, winning five out of eight matches. True, tomorrow the Asian team is waiting for PSG.LGD, Team Secret and Alliance, and the guys are likely to leave their intermediate third place, but not the battle for the top 4.

Newbee and Alliance are pleasing. Both teams have 4-4 statistics. The teams have their own style and tactics, which they adhere to.

The main disappointment of Group A is Team Liquid (3-7). They continue to play individually, no coordinated team actions. The 2017 world champions have not yet lost their chances of reaching the upper bracket, but the quality of their game so far does not correspond to this level.

Finally, Keen Gaming (2-8) and Chaos EC (1-7) are fighting for survival: both teams play rather weakly and will decide the fate of the penultimate place tomorrow in a full-time meeting.

OG  is a solid group leader here (9-1). We can safely say that the current champions are ready to defend their title. Three convincing victories, 6-0 in a day, n0tail and company caught courage!

Also, Vici Gaming show very good level (7-3). Yes, Evil Geniuses (4-5) are at it again, having made two victories over the Chinese team, but the rest of the teams from the middle of the standings can not do anything yet.

The main surprise of the day was Natus Vincere (7-3). 5-1 for Friday, but gave away an easy map to Infamous. Neither Virtus.pro (3-5) nor NiP (1-7) could do anything with NAVI. There is only one solution: NAVI players are given their comfortable heroes. Zayac had Earth Spirit, SoNNeikO gets Ancient Apparition, Crystallize farms on Alchemist, and Blizzy made great moves on Axe.

The tournament is tough for Evil Geniuses. As in the case of Team Liquid, there are problems with teamwork, and the defeat from OG was quite humiliating. The match with VG showed that the guys can show a good game whenever they want, but it's too early to talk about stability.

Virtus.pro lost all four maps today. On the one hand, it's a disaster. On the other hand, it were matches against Vici Gaming which is not ashamed to lose, and against Natus Vincere, who played with one strategy that VP decided not to break with their bans.

Fnatic (3-5), Royal Never Give Up (1-7), Ninjas in Pнjamas (1-7) continue to fight for survival. Despite the fact that RNG have the same statistics as VP, they are doing slightly worse. There play is good but just not enough. RNG and NiP, unfortunately, are disappointing.

Finally, we cannot ignore Infamous (4-4). The Peruvians show an extremely spectacular game, and it is combined with efficiency. A draw with NAVI, a draw with Vici Gaming and a victory over Fnatic: former "catburgers" can definitely be satisfied, and if they manage to keep this courage, who knows what successes they will be able to achieve further.

Infamous - Natus Vincere. Both maps were full of madness and fun. It is impossible to describe it rationally: you just have to see it.

Rampage by Arteezy. If someone else did not know that Arthur's cojones are made of steel, here is another proof! Almost alone, the Canadian was able to turn over an already lost fight and prevent Vici Gaming from making a comeback. It is not a fact that EG would be able to arrange such a confident victory, if not this feat. Well done, Arthur!

Twenty matches are waiting for us tomorrow. See you!