Three days of the hardest, but the most interesting group stage came to an end. Tomorrow we will have a quite easy Sunday, but first, we'll sum up the results of Saturday. 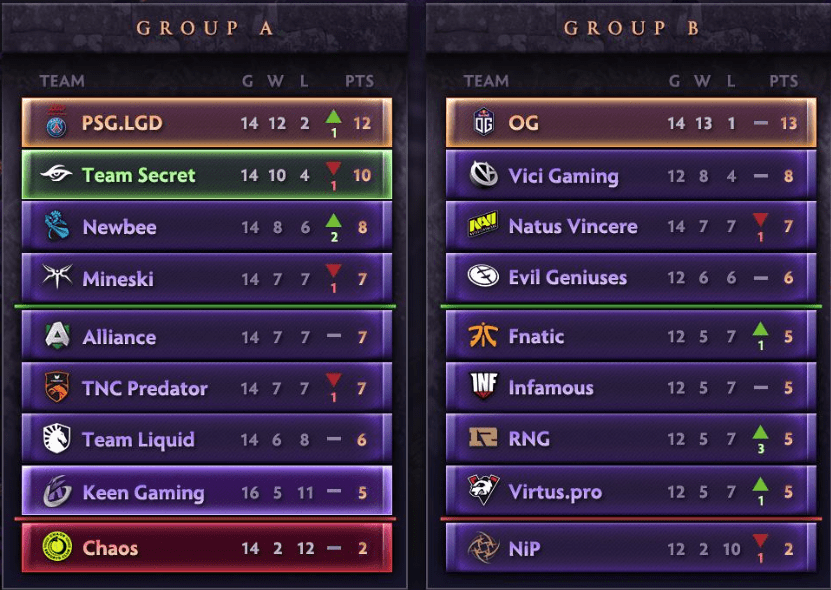 Let's start with the sad news: Chaos Esports Club leaves The International ahead of schedule. The Europe qualifiers winner could win only two of the fourteen maps and lost all chances of reaching the Playoffs. The Misery's team will only have a demonstration in the form of a match with Team Secret.

Team Secret with PSG.LGD guaranteed themselves the top 2 of Group A. Moreover, the Chinese team will have priority in choosing their first opponent: they won it after winning the full-time meeting. Puppey switched his team into the energy-saving mode and began experimenting with heroes like mid-Pudge. Yes, we know that he is still popular in pubs, but he already has other roles on the pro-scene. The Chinese team didn't do anything like this, just confidently won all maps.

Five teams will compete for the two remaining slots of the upper bracket. Team Liquid's chances are rather theoretical. Despite a good game during the third day, much will be decided in the matches between Team Liquid and TNC Predator; Newbee and Mineski. It's worth noting that Alliance lost the second game of the tournament after making mega-creeps. Loda and his wards haven't worked on their mistakes yet. Perhaps these two maps will not be enough for Swedens to get into the top 4 of the group.

It was quite a tough day for the CIS fans. Natus Vincere faced a hard Saturday after a rather easy Friday. Their opponents began to understand their tactic. The Fnatic and Royal Never Give Up teams couldn't afford to give away points to the enemy — they trained well and won two times.

Virtus.pro performed well. At first, they felt all the pain from Io-carry, and the power of OG, who wiped VP from the map. It was much more critical for the Russian team not to lose points in the match with Infamous, and they coped with this task perfectly. 2-2 at the end of the day and VP remain in the game.

It will be especially hot tomorrow. So far, only OG has the first place in the group, NiP won't get into the Upper Bracket, and Vici Gaming with Natus Vincere cannot take the 17-18th place. Everything else can still turn in the most unimaginable way.

The ppd's team needs to win at least three matches tomorrow to be saved. Judging by how the "ninjas" spend their games, this seems very unlikely. Vici Gaming has slightly higher chances of success due to 8 victories, but they will play against Natus Vincere and OG, so the Chinese team aren't in a safe place yet.

During the group stage, we made conclusions about individual teams, but now they all came out as a reasonably tight group, and it will be challenging to highlight someone. The extremely spectacular matches await us, where everyone (except OG) needs a victory as air. Get enough sleep - don't miss them tomorrow!

Alliance vs Newbee. There is some turmoil in the macro game, the actions of teams that didn't seem logical and the wonders of comebacks. Newbee could turn over the lost game and end it in their favour. It was spectacular!

The final matches in Groups will start tomorrow at 03:00 CEST. The full schedule is here.