The first game day of The International 2019 turned out to be quite spectacular, and we finally saw all 18 teams in action. 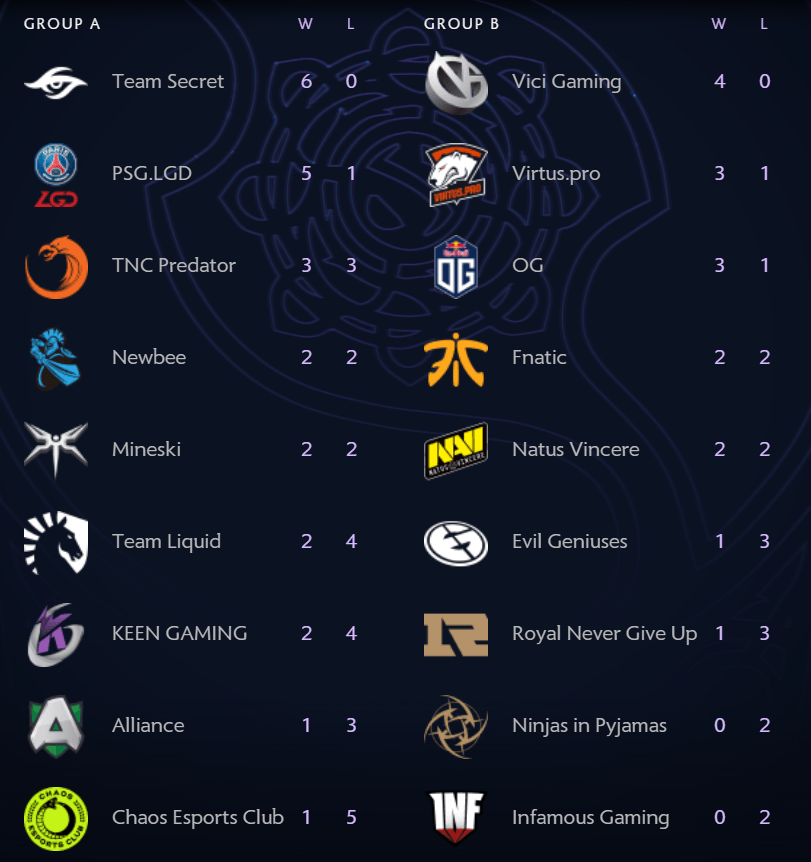 Group A has a confident and sole leader. Team Secret did not hesitate and won six out of six matches. At the same time, Puppey's squad was close to losing several times: the European team often preferred to play like underdogs, and the safety was not always so solid. In the first map, Secrets had to fight against mega-creeps, but we'll talk about this game later.

PSG.LGD and TNC Predator won five and three maps respectively and took second and third places. There were no questions about the Chinese: they lost one stubborn map to TNC but in general showed confidence, although the Asian team unexpectedly lost to Mineski.

The most surprising team in a negative context was Team Liquid. Yes, they defeated Chaos Esports Club, but they didn't show anything against Newbee and Team Secret. They have a lot of work to do on their mistakes, but so far TI7 champions do not look like a team worthy of their status.

There were only two rounds in Group B, but Vici Gaming were the only one who showed perfect results. Virtus.pro and OG finished the day with 3-1 statistics. At the same time, the current world champions had a significantly easier calendar: in a good way, it was possible to win all four maps in matches with Infamous and Natus Vincere. NAVI, by the way, showed themselves solid: they were also able to draw with Evil Geniuses.

Evil Geniuses traditionally spend the first day not that well, so 1-3 should not be very embarrassing. We'll also mention Fnatic: many were afraid that they would come to lose the tournament, but we saw the good play from them in the match against EG, and statistics 2-2 spark with optimism.

Match of the Day

The very first map of the game day gave us a phenomenal struggle. The Alliance tried very hard to crush their opponents, but Team Secret managed to get out, despite the mega-creeps.

We want to highlight Taiga's game: his Terrorise provided us with several highlights, he even stole Aegis with it. We sincerely recommend watching this match.

Best moments of the Day