The International 2019 Compendium Predictions — let's win together! ⚡⚡⚡ Esports and gaming news, analytics, reviews on WePlay! The latest news on WePlay!

Dota 2 The International 2019 starts VERY SOON! You've got some time to make Compendium predictions if you haven't done them yet, and we would like to share our thoughts on how the tournament could possibly go. Many points seem rather random, but all we have to do is try to guess the more preferred options. If you're not sure, take a look at our Qualifiers' predictions: 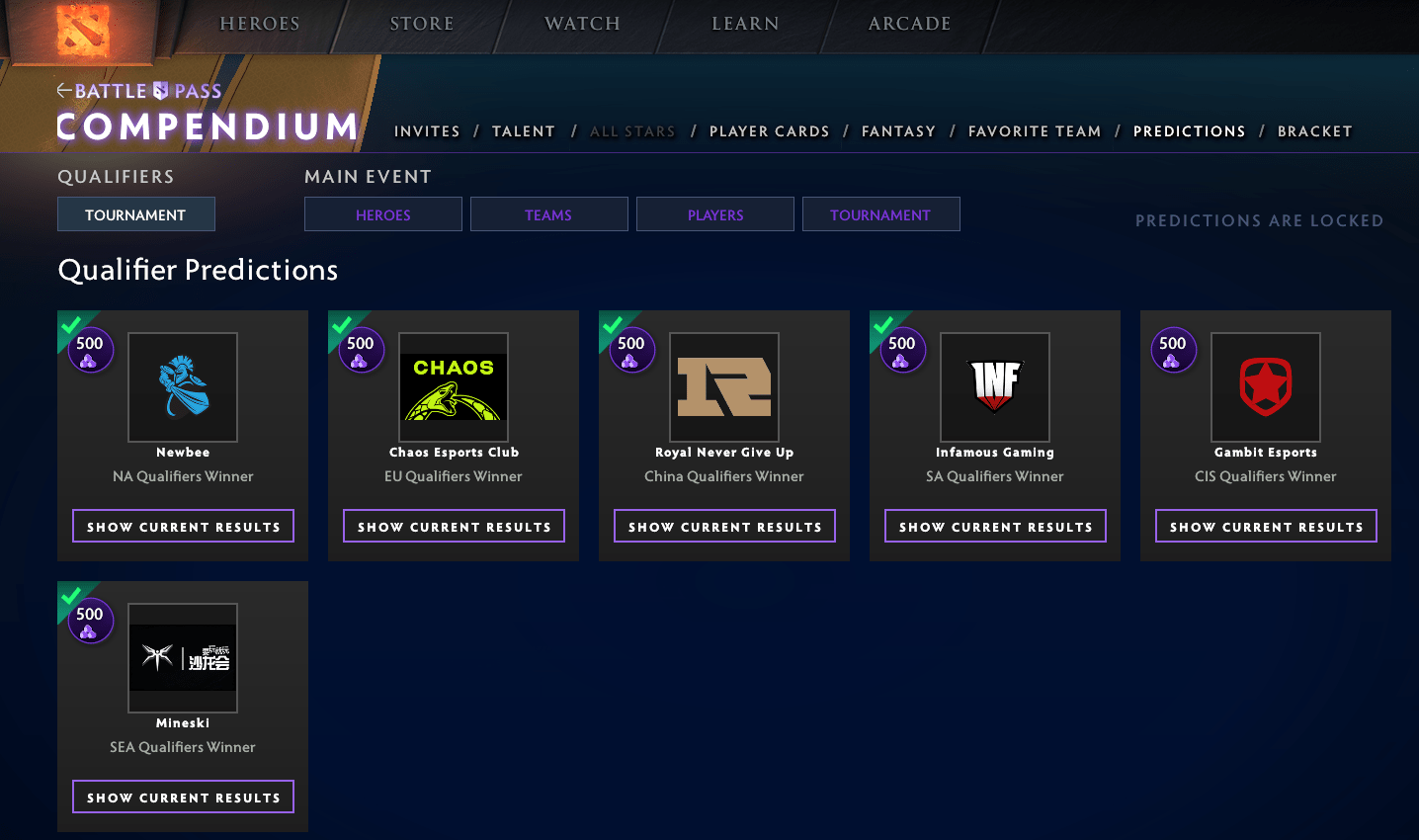 Most Picked Hero: Grimstroke. There's not much difference between 4 and 5 positions, but if IO and Omniknight have always been OP at the fifth, Grimstroke with the recent patches have been quite good.

Most Banned Hero: Omniknight. It might have been Chen, but he was nerfed a lot by Valve in the last patches.

Hero with highest winrate: Centaur Warrunner. We might say that this one is about heroes who decide matches. Arc Warden, Meepo, Broodmother are all good, however, we will choose Centaur.

Hero with highest Assist avg: Ancient Apparition. It's either him or Spirit Braker. We prefer AA.

Hero with lowest Death avg: Anti-Mage. You can choose between AM and Naga Siren though.

Hero with the highest XPM (experience per minute): Meepo. No chances.

Most kills in a game: Morhling. Morph is one of the strongest heroes now, so he will definitely overcome Tinker, who need a proper game to reach the top.

TI9 Winner: Team Secret. Puppey's boys will overcome everyone else, even Vici Gaming, who are playing at home.

Most kills in a game: Vici Gaming. Still, the Chinese team is playing aggressively. They are the favourites here.

Fewest deaths in a game: Team Secret. It should be a mockery and an unrealistically one-sided game. Team Secret and Team Liquid can demonstrate such a high difference in class, but we will still choose Puppey and co.

Most Assists in a game: Team Secret. That's it. Teamplay wins everything.

Team that wins the longest game: Alliance. It's about their style.

Team that wins the shortest game: Virtus.pro. The Bears like to play aggressively and quickly.

Team that picks the most different heroes: Team Secret. This is about a team that will play the most matches and at the same time not be shy to experiment.

Team that picks the fewest different heroes: Newbee. ex-Forward Gaming won't be too strong at TI9, so they most likely will leave the tournament first.

Player with highest Kill avg: Maybe. Miracle-, Nisha and Ana are good too.

Player with most Kills in a game: Miracle-. Killing machine he is.

Player with highest Assist avg: Tims. The support and the spacer, he hunts opponents.

Player with the most Assist in a game: Solo. Intuition.

Player with highest Last Hit avg: miCKe. He farms a lot, that's why we chose him.

Player with the most Last Hits in a game: Nisha.

Player with the most GPM (gold per minute) in a game: SumaiL.

Player that plays the most different heroes: Zai. Everyone knows that the Swede loves to experiment. Zai can offer an unexpected hero who will go well in a particular pick.

Heroes picked: 101+. Dota 2 is so good that now it has practically no trash heroes. Each of them can be used in a particular situation. Therefore, we believe that teams will show all the diversity in the game.

Longest game of the tournament: 70-79 mins. The stats say so.

Shortest game of the tournament: 15-19 mins. Won't be less, this one is optimal.

Make your bets and share the results with us!