There are many amazing open-world games out there which you can play. In fact, the amount of those types of games has been increased a lot during the last couple of years. One of the main reasons behind this is the fact that many people actually really enjoy playing them. They are easy to pick up and you can have tons of fun with your friends. Also, let's not forget that there are many games right now who can be played in 4K graphics. This is definitely a huge step forward and it makes the entire experience a lot better, especially if you play an open-world game.

Having said that, let's take a look at some of the most popular open-world games right now. There will definitely be some names which you won't be expecting here. 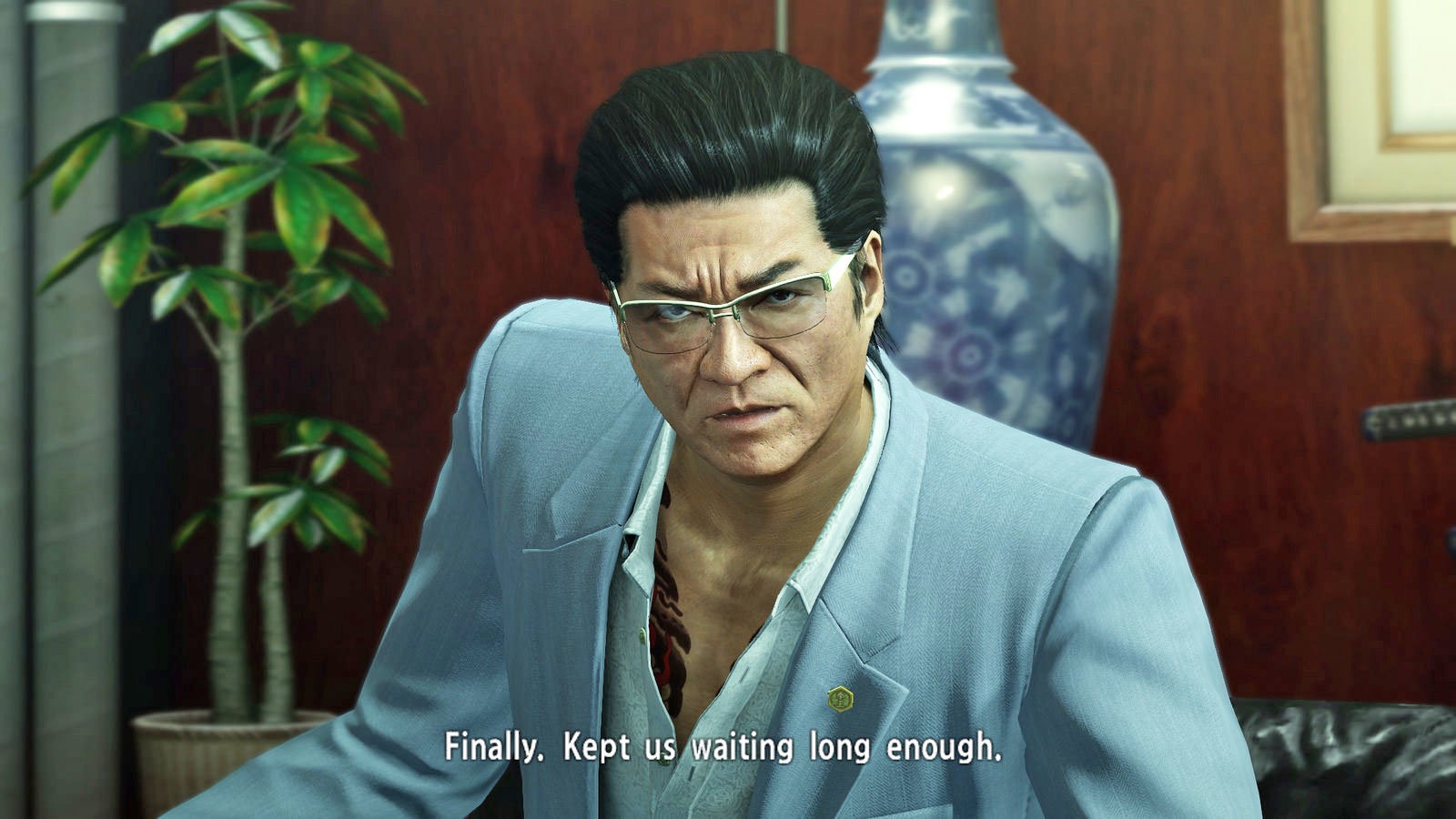 Yakuza 0 is an amazing open-world game which is set in the 1980s in a small town near Tokyo, Japan. As the name suggests, you will take be part of one of the most famous crime organizations of all time - Yakuza. There are many amazing quests and tasks to do along the way which will make this game worthwhile. Also, you have the option to choose between two styles of outlook which can be changed even in the middle of the battle. This game was developed by Sega and it is available for both PlayStation 3 and PlayStation 4. 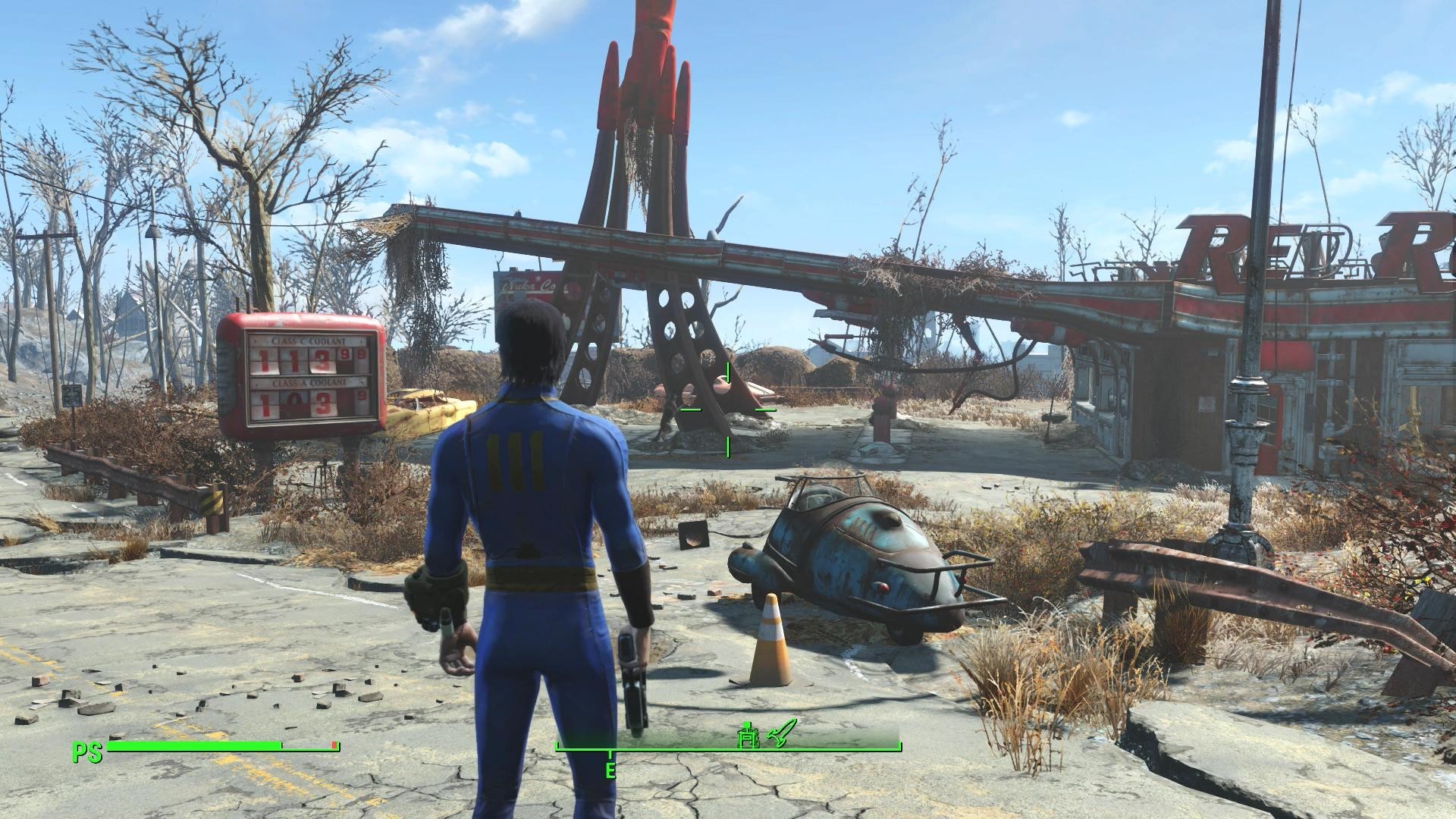 There are not that many games out there which are as influential as Fallout 4. This amazing game takes you to the post-apocalyptic world of Boston, MA where you have to basically survive and try to find what happened with a boy who gets kidnapped. Of course, there will be countless challenges along your way but hey, that's one of the reasons why this game is so damn good.

In fact, this goes for pretty much all Fallout titles. They all have a somewhat special vibe to them which makes the entire experience unique.  All in all, this game is a must for any open-world type of a guy out there. Assassin's Creed has always been a synonym of success when it comes down to the open-world video games. This franchize has so many amazing additions in it, that calling one better than the other will be a lie. However, Assassin's Creed Odyssey might be one of the most amazing ones yet because, apart from being a classic open-world game, it also has many elements of the role-playing games. In fact, there are multiple different branching quests available, which means that you can end the story of the game in many ways. What's more, you can even choose the gender of the main character. The game features a notoriety system in which the mercenaries will be able to chase you if you try to commit a crime.

Both of the characters which you can choose from (Alexios and Kassandra) are Greek mercenaries which are basically descendants of the Spartan king Leonidas the first. In fact, they inherit his broken spear, which has some special powers for you to use.  Odyssey also has a new type of a skill tree system which basically allows you to unlock new special abilities.

The plot itself takes place n 431 BC, which is exactly four hundred years before the event of AC: Origins. In fact, once you start playing, you will have the chance to choose to fight for the following sides - the Delian league led by the Athens or the Peloponnesian League led by Sparta. One of your main tasks will be to try and restore your family and basically find out what has happened to you and them. Of course, in a classic Assassin's Creed fashion, there will be countless obstacles, monsters and other things to deal with along the way. It is just impossible to talk about open-world games and not include the latest addition to the Grand Theft Auto franchize. Made and developed by Rockstar games, Grand Theft Auto V is one of the most amazing games which got released in the last couple of years. It is set in the fictional state of San Andreas which is based on Southern California. You get the chance to freely roam the state and more importantly - Los Santos, which is based on, well.., Los Angeles.

Also known as an action-adventure game played from a third-person or first-person perspective, GTA is a game full of amazing missions for you to complete and it has only one objective - to progress through the main story. Of course, outside of that, you are basically free to do whatever you want. This means that you can just drive along with the city and explore, do heists and different quests, meet new friends,  build your own business and more. However, it is important to know that if you progress through the main story, you will be able to unlock more gameplay content.

The three main characters in the game are called Michael Townley, Trevor Philips, and Franklin Clinton.  Michael is basically a witness protected guy who is living in a pretty cool house with his family in Los Santos. On the other hand, Franklin is a cool dude from the hood who is working for a corrupt car salesman. Anyway, he meets with Michael and then they became friends. Later on, he founds out that his life is cheating on him with his tennis coach, which leads to the destruction of his house. However, in a classic GTA fashion, a huge plot twist happens - this house actually belongs to a drug lord, not the coach. There is not really a game in this segment which is as popular as The Witcher, one of the most amazing game series of the decade. The Witcher 3: Wild Hunt is an action role-playing game which is played from a third-person's perspective. Players can take control of Geralt of Rivia, which is basically a monster known as The Witcher. he can do many different moves and also has a wide variety of weapons to use. However, he mainly uses a steel sword to fight versus humans whereas the silver sword is mainly used against other creatures and monsters.

Since this is an open-world game, it has a lot of amazing dynamic environments and artificial intelligence, which all add up to the uniqueness of it.  Of course, it is not all about just mindlessly killing things. There are many objectives which you can do and you can even read about your enemies beforehand. Of course, there are many things which can be looted and later on - sold to the vendors in order to create potions and bombs. 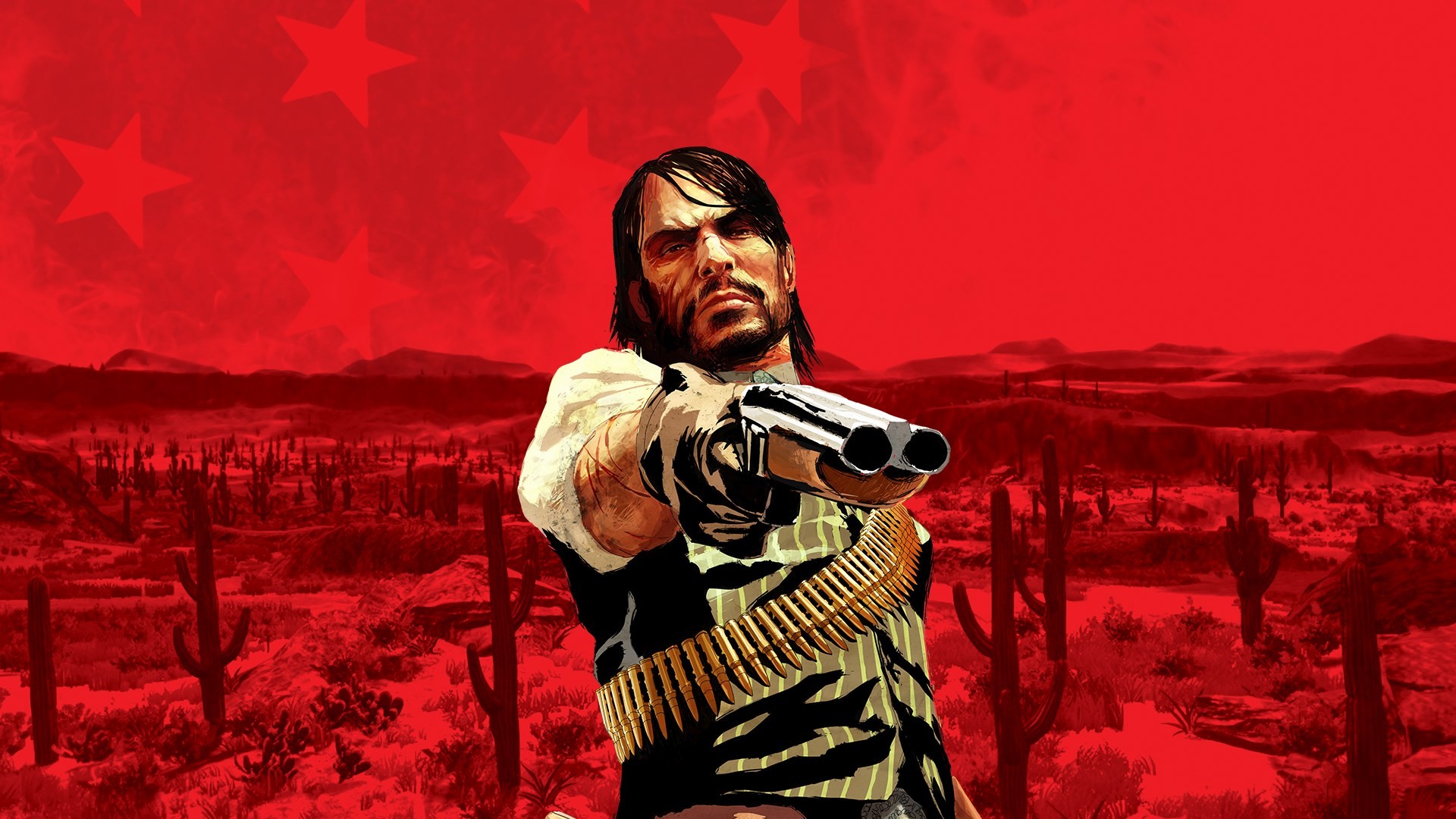 This western-type of an action-adventure game is played from a third-person perspective and it became one of the biggest hits when it got released back in 2010. In fact, even to this day, it still remains one of the most interesting games in the open-world genre.

The players can take control of John Marston and do many different things such as completing missions, linear scenarios with different objectives and more in order to progress through the main story. Of course, you can also just walk freely outside the missions and interact with the environment. In addition to that, there are many amazing unique things in this game such as different breeds of horses which must be tamed in order to use them or using trains as a transport tool. Even though this is a faster way to move around, it can be pretty dangerous because it will get randomly stopped in the middle of nowhere and threatened to be robbed by some mobsters. 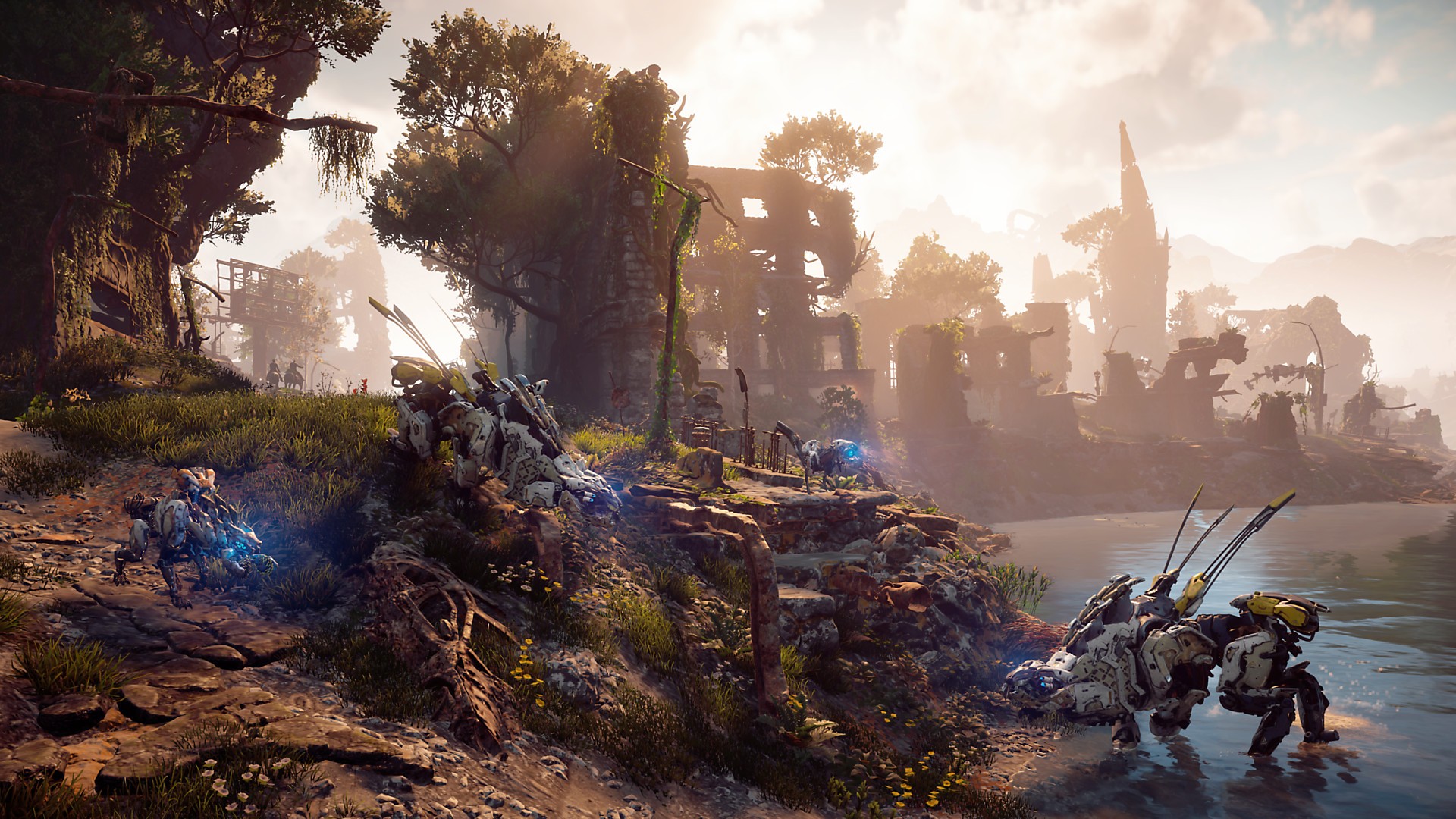 Horizon Zero Dawn is a classic when it comes down the action role-playing open-world games. Published by Sony Entertainment in 2017, this game follows the story of Aloy who is a hunter in a new, special world. However, instead of having other hunters as well, this world is dominated by machines.

In order to survive, the player must use a wide variety of weapons, spears and overall stealth mechanisms in order to survive. Aloy is able to kill her enemies in many different ways ranging from just putting random traps on the ground to using the Tripcaster, shooting them with arrows or just spearing them.

Their enemies - the Machines, have different machine components which are vital for Alloy in order to survive. Basically, she needs to get their parts in order to use them as crafting resources. In fact, there are many amazing things which you can craft in this game such as ammo, pouches, quivers, resistance, antidotes and more. You can even make special slots to your weapons which will allow them to do more damage.

In terms of survival, the hero is equipped with a thing called Focus, which is basically a special headpiece which can tell the position of her enemies as well as the potential loot. Of course, the Machines are definitely one very hard enemy to have because they have a wide set of abilities designed to kill. However, given the proper approach to them, you will be able to navigate fairly easy.

One of the most amazing aspects of this game is the fact that you can also just sit there and watch the various wild animals. There are many herds and more, which can also provide you with resources but other than that, they are pretty cool to exhibit. All in all, a must for any open-world fan out there. Another amazing action role-playing game which can be played either from a first or a third-person perspective. In fact,  the Elder Scrolls has always been considered to be one of the most amazing open-world games out there. It also used to have one of the best graphics as well.

You, the player, get the chance to freely roam the place which has amazing wilderness expanses, dungeons, cities, towns, fortresses and more. Inf act, you can even move around in this world by riding horses or using any other fast-travel systems that are available in the game.

Even though it is indeed very fun to just roam around, it is a good idea to finish some of the most important quests first. After all, they will provide you with different rewards and even unlock new things to do.  Also, there are numerous Non-player characters which you can talk to, kill them or just get a quest from them which will give you some sort of reward. Of course, there are some NPC's which can't be killed because they are a part of the main story of this game.

We strongly advise you to try out this game because it is definitely worth it.