The amazing Brawny build by Cmel at WePlay! Underlords Open

The amazing Brawny build by Cmel at WePlay! Underlords Open ⚡⚡⚡ Esports and gaming news, analytics, reviews on WePlay! The latest news on WePlay!

Although Nikolay “Cmel” Sakharov took the second place at WePlay! Dota Underlords Open, it was his specific play that we are now especially excited about. The first game of the final day of the tournament started with his confident victory – and he made a few surprising decisions on the way. First, let’s take another look at that performance in order to recall the events of the game:

Cmel started dominating early on in the game and going for upgraded Axe – the hero later became one of the major forces in Cmel’s crew of characters. Eventually, his victorious roster looked like the one on the image below – and you might notice that Nikolay didn’t pick a single global item during the game. Are we witnessing the birth of a new meta? 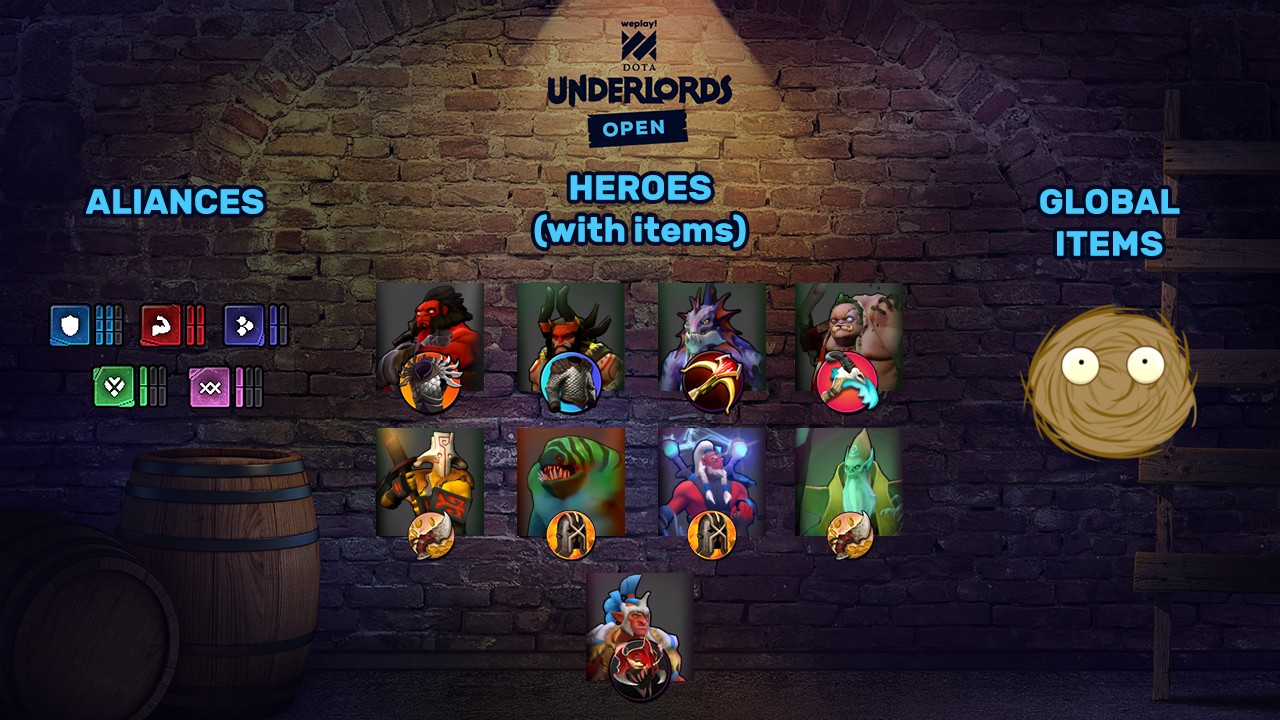 The first day of the finals was awfully played by me. A wasn't prepared for the new meta, so the result was fairly obvious. My plan after that was to clean my thoughts and respond to a specific situation rather than utilize a certain strategy.

You might be wondering how Cmel paved his way to building such a frightening force – and we are here to review the process. Nikolay performed an impressive win-streak, and perhaps the key reason to that was the early discovery of a few Axes, one of which got equipped with exceptionally effective Helm of the Undying while the other – Tier 2 Axe for the time being – was reinforced with a straightforward Chainmail. These are actually great early items for such tanking units as Axes – although later in the game, Cmel went for something more specific to make Axe even tougher.

A few steps ahead – and Cmel’s strategy started to shape. He picked another Warrior to strengthen the board and release the synergy, and the hero of choice was Pudge who received the aforementioned Chainmail. Tier 2 Axe got the Blade Mail, which determined his role as the main attacking force. The third Warrior – Slardar with Helm of the Undying – completed the first phase of team building, and the power trio was already having +10 armour from the synergy. Having such an effective composition this early in the game was the crucial point of Cmel’s further performance.

In the first game, I was lucky enough to get three Warriors right after the third wave, which resulted in me having a Tier 2 Axe with damage-reflect. That was a great base for further development into Brawnies, although at that moment, I was thinking about going for reliable Hunters rather than Warriors.

Two obvious ways to build upon that crew included going for Heartless and Scaled synergies – and Drow Ranger favoured the former together with already featured Pudge on the board. Generally speaking, it resulted in a 15-armour difference between Cmel’s team and his opponents. After the game lasted for a quarter of an hour, Nikolay’s strategy resulted in having Tier 2 Pudge, Drow Ranger, Slardar, and two Axes on the board – along with freshly picked Juggernaut. That was another investment in a yet-to-be-revealed Brawny/Warrior devastating power – although the first level of Brawny synergy was already in place. The item allocation was mainly focused on reinforcing Warriors with additional armour.

Getting the damage-reflect for Axe for a starting point to develop into Brawnies. The armour for the Beastmaster was one of the best late items for the character.

Two Helms of the Undying also granted Cmel’s team with precious seconds to deal even more damage required to turn the tables. Having the best position for quite a long time and the highest net worth resulted in the continuous building of a strong team. Cmel introduced another Brawny to the board – Beastmaster, which led to having the fourth working synergy together with Drow Ranger and a newcomer Lycan. Hunters entered the game, although not for long, as the main focus was still on Brawnies – and here’s why.

By the 10th wave, I already had a rather heavy board, and that was the moment I recalled the old multipurpose tactics with six Warriors, two Warlocks, two Scaled units, and armour reduction. Until the latest patch, it wasn't widely used.

Going for the win

After losing a few rounds and HP points, Cmel decided to make several changes to the roster. The major force represented by Tier 3 Slardar, Beastmaster, and Axe had already shaped by that moment – and the time had come for reinforcements. The crew was joined by Tidehunter (who also granted the team with the first level of Scaled synergy), Necrophos (to bring back Heartless synergy after Drow Ranger left the roster), and Disruptor (to complete Brawny synergy along with adding the effect of Warlocks). Pudge with Juggernaut was also in place, and the whole team was equipped with very specific items – two Helms of the Undying (to grant the inevitable damage) and two Poaching Knives (to finish off the weakened enemies and buff the economy, although Cmel regretted buying the second knife afterwards). Troll Warlord was also a deadly force with Mask of Madness. At the same time, there wasn’t a single global item to back up Cmel’s team – and you have to admit that it worked perfectly.

By that moment, my Brawnies were pumped enough to withstand the opponents' casts with the help of the Scaled synergy. The set of artefacts was granting me the ability to successfully utilize the key abilities of my heroes in each battle.

Overall, this Brawny/Warrior build proved to be highly effective. Judging by the final rounds of the game, there wasn’t a single force among the opponents’ teams to counter the four-Brawny crew. Axe, for instance, became nearly unkillable – and he was doing an enormous amount of damage as well serving as the bodyguard first. After successful eliminations of enemies’ Assassins, Axe was constantly proceeding to unleash his fatal blows on remaining characters. On top of that, Cmel’s team was blessed with 30% magic resistance thanks to the Scaled Alliance bonus.

There's plenty of heroes you can use to strengthen the board without losing the key synergy. Ideally, I prefer to pick Doom and Alchemist instead of Pudge and Necrophos since the undead have the fat Alchemist while the board gets a lot more powerful.

We are not the ones to judge if this strategy is viable and necessarily the best one, but it was impressive and exciting. Perhaps, this is one of the possible tactics to use if you happen to pick a similar pool of heroes, although it is not the only option.

You should only invest in this specific strategy when you haven't received any early HP damage, otherwise you risk to fail the crucial moment when you don't have enough damage on the board and the synergies are not completed.

Honestly, after watching Cmel’s performance, we do think he deserved the first place at WePlay! Dota Underlords Open as much as snofe did – but his story is a different one.