Teamfight Tactics can be compared to real life. Imagine, you come out well dressed under the scorching sun. And after an hour you're staying aside under heavy rain and watching people who knew what to expect. The League Legends mode is similar to what we've just described. You can start with one team of champions, but if you can't make decisions and adapt quickly, you'll lose. Don't forget about random. The items, the champions, are always different and you need to learn by heart all of the theory and constantly refresh it in your memory if you want to win.

Rengar and his wild friends

The main goal is to collect Rengar and add two Assassins like Zed and Khazix. These are your primary goals, and later you can add Warwick, Blitzcrank or RekSai.

Why do we focus on Rengar? He's better be a ★★-champion. The longer you play this character, the higher the chance of Statikk Shiv (Recurve Bow + Tear of the Goddess) appearance. Just kidding, he doesn't affect the item in any way, but this could happen with a high degree of probability. The second item for him can be Guardian Angel if you obtain Chain Vest and combine it with B. F. Sword.

Tip: the more identical characters you have, the less chance of their appearance. It means that the last duplicate of the champion before the ascension may never be. In this case, buy the heroes that you get often. Thus, you have the chance of getting the right one. And then sell those you bought at the same price. Yes, you may lose couple of rounds, but you'll come up with the best champions by the final stage. The same can be done if you get Elementalists at the beginning and different classes after several rounds.

At a later stage, you'll need to get Chogath. A bunch of his spells makes enemies flee or even disappear. An excellent relic for him is Morellonomicon, which could be created from the Giant's Belt and Needlessly Large Rod.

Some players noticed that the ordinary champions fall out more often. For example, Pyke - you can use him at the beginning as the most useful.

Volibear and the magic spirits

This build, like the first, focuses on a specific champion - Volibear with Rapid Firecannon (two Recurve Bows). The character is quite ordinary if you got him without the others from this build and the needed item. Also, you can strengthen the build with the Guisoo's Rageblade, the Warmog's Armor (two Giant's Belts) or Bloodthirster (B. F. Sword + Negatron Cloak).

When you got all of that we mentioned above, pay your attention to the Elementalists build. Three will be enough, because, having gathered their power, they will summon a golem. It will be useful.

At one point, Volibear will stop to be valid on your desk and here comes the time of a more powerful and interesting Blitzcrank for the later stages. He will always hook the second rows and beat the most compelling characters at the same time. Sometimes it is enough to change the position to win. Left/right or all in one/two lines. You need to practice to find the safest Blitzcrank's position. Sejuani, RekSai, Lissandra, Anivia, Chogath and Brand will help to fulfil your lines.

This built is the most unpredictable from those that we've listed in this guide. But in theory, the roster: Kennen, Lissandra, Anivia, Brand, Pyke, Shen, Zed, Akali perfectly freezes rivals and then sets them on fire. Their main power and abilities directly rely on Pyke and Elementalists. It may be challenging for you to collect all of them because you'll need ★★-Pyke with Spear of Shojin. This will strengthen Elementalists and help them. It's better to take two at once. Gather two Knights on the first line at the beginning or buy Shen. Then play with Elementalists, and give Brand something to increase mana and damage with magic.

Varus, Vayne, Kindred, Ashe, Sejuani, Mordekaiser, Volibear, Chogath are your army now. As you may notice, this build has a perfect balance. Half of them suffers, half - kills. The first steps should be towards ★★-champions, Vayne or Varus. And also pay your attention to the following items: Spear of Shojin, Guinsoo's Rageblade, Infinity Edge.

You can take your time with increasing levels, but need 50 gold for ★★★-Vayne. Such a warrior will provide the first battles with an excellent chance of victory, and others could be improved by that moment. For example, Ashe - she freezes any enemy perfectly in time and effective with Spear of Shojin or any item for the speed attack. Next step is to think about getting Frozen Mallet. Thus, any character can be Glacial like Varus, in our case.

We'll take these three champions as the basis: Warwick, Nidalee and Ahri. Another character may be added later. This would be either Darius for Imperials or Shyvan with Elise for Shapeshifters. Draven and Swain will be the attacking tanks, so first of all, get useful and high-quality items for them. For the first champion - Bloodthirster, for the second - Phantom Dancer. You'll get team with significant damage at the finals. 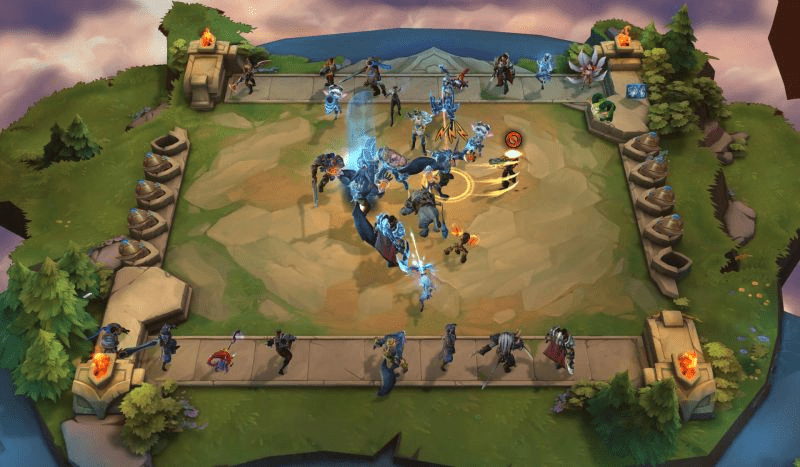 A very stable build is always needed, and therefore we will finish with the most reliable at this time. This is an excellent balance between damage and HP, which you can rely on at all stages of the game. Three characters should be the leaders, the rest will protect them, and one will even become king if you could get him. We are talking about Warwick, Nidalee and Ahri. Start with one of them, and then get to Aurelion Sol himself. It would be nice to fill the whole fraction with some of the magicians, who is also Ninja. It's an expensive build, but powerful and worth your gold. By the way, Lulu is necessary here.

Here we finish our guide - you can come up with your own effective build and let us know about it.

The main thing for every TFT player is to understand that the game can't stand still and any build may be irrelevant with another patch tomorrow. If you want to master such a game, you need to dive deep into it — breath deeply and train. We wish you victories and great combinations!