One of the most prominent organizations on the CIS ground decided to fall behind other teams and changed their Dota 2 roster. Having four players replaced and keeping only Miposhka, Team Empire aimed at better results. Let’s dive back into history of each player in the squad.

Yaroslav “Miposhka” Naidenov has been loyal to Empire for more than two years, where he incredibly performs as a support player. The best and most significant result Yaroslav achieved in his career is the 7-8th place at The International 2017. Before joining Empire, Russian player competed in several amateur teams. It’s worth noting that in new season we’ll see Miposhka as offlaner, which is pretty exciting considering he’s also a captain.

In last two years, Zaur “Cooman” Shakhmurzaev tried himself in such teams like Gambit, Effect and Double Dimension. Although he can’t boast with some top results, Cooman celebrated the 5-8th place at WESG 2017 and the 13-16th place at ESL One Katowice 2018. We are yet to figure out if his new team is going to help the player with getting more titles.

Oleg ”Sayuw” Kalenbet is a new figure on professional Dota 2 scene but on amateur level he made himself known through a number of tournaments. Many people might remember Sayuw from the KFC Battle 2018 where he took second place. Empire recognized Kalenbet’s potential and it’s quite possible they’ve won in the long term.

There is not much information about Igor “Maden” Modenov around the web. He did manage to change many teams and experience international LAN events. Among the Russian player’s main achievements are: the 13-16th place at ESL One Katowice 2018 and the 13-14th place at Dota 2 Asia Championship 2018.

Vladimir “Chappie” Kuzmenko spent most of his professional career in Team Empire but, before joining the Russian organization, he drew attention to his persona by a marvelous Meepo play he showed in Comanche. Later Chappie joined the Thai squad called Clutch Gamers, where he briefly and unsuccessfully played in SEA region. “What did he achieve then?” you might wonder. We could’ve listed The International 2017 here, but due to issues with the American Embassy he couldn’t attend the tournament. That’s why the best result Chappie achieved is the 5-6th place at Dota 2 Asia Championship 2017. 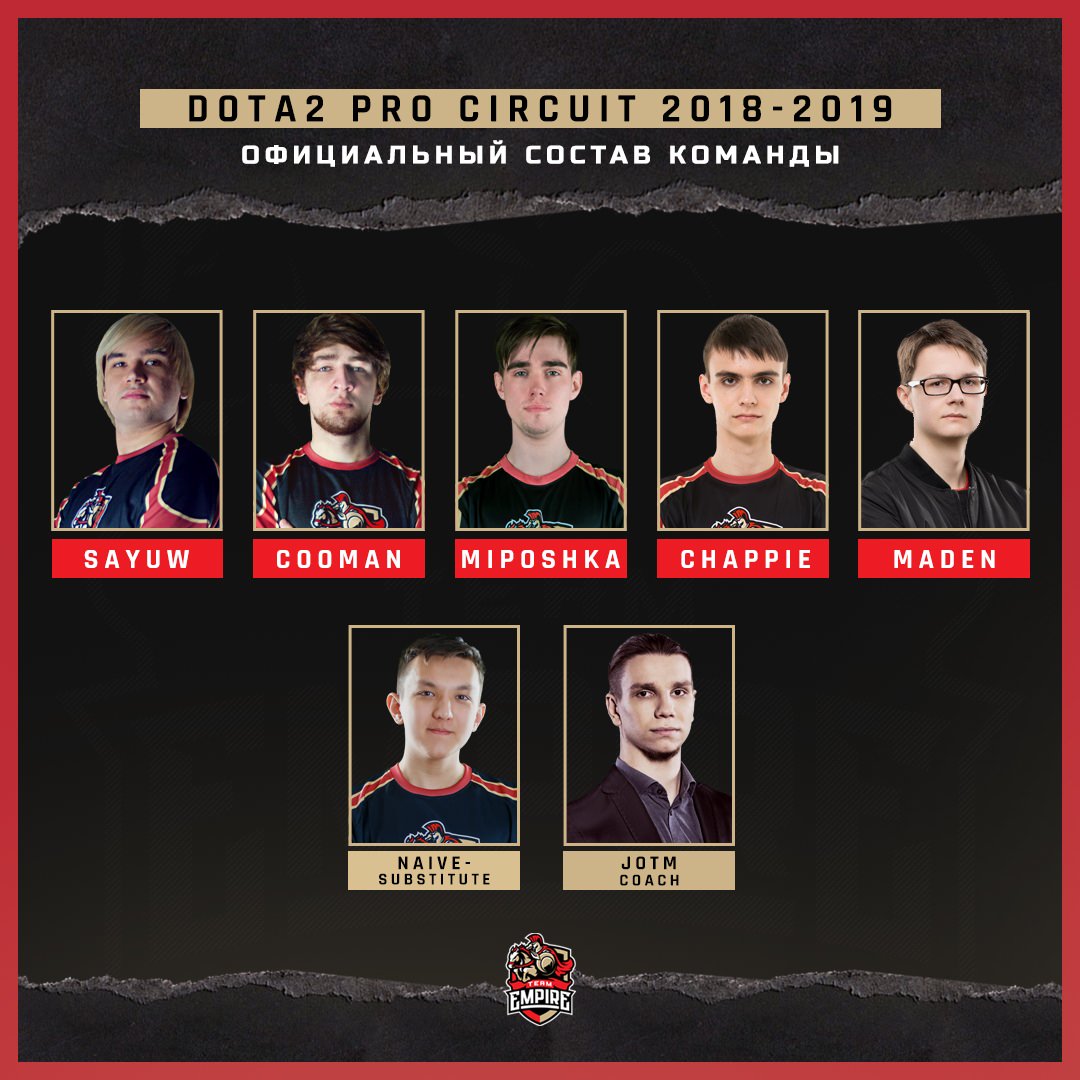 Without a doubt, playing as a new roster is always a challenge and sort of a leap in the dark. But Empire has an experienced coach Egor “JotM” Surkov, who should bring players’ level of confidence even higher! We can only wish Team Empire best of luck. Perhaps, they will become the unbeatable ones!