Subscription services: the future of digital distribution? ⚡⚡⚡ Esports and gaming news, analytics, reviews on WePlay! The latest news on WePlay!

At E3 2019, the one with Keanu Reeves and Ikumi Nakamura, Ubisoft presented its own games subscription service: UPlay Plus. In short: starting September, 3rd of this year, the fathers of modern "Prince of Persia" and the grandfathers of "Assassin's Creed," for a symbolic membership fee of $14.99 will provide subscribers with more than a hundred projects to play. And it's not about desktop browser games, indiephilia and other nonsense — the list of available games includes all the appetizing flagship projects, which people call short and succinctly: AAA.

What is it like? Take a bite from Far Cry, Assassin’s Creed, ANNO, For Honor, Watch Dogs, Rainbow Six: Siege and The Division - the author's hard drive fainted three times during the enumeration - and only for fifteen dollars right here and right now! No one could have expected such a philanthropic fairytale even if the whole of Paris has had to burn! But Ubisoft made it: just sign here, yes, and a drop of blood to seal the deal, thank you.

And not that this was an innovation: UPlay Plus will work similarly to the already functioning services as EA Origin Access for PC, EA Access for consoles and the multiplatform Microsoft Xbox Game Pass. The thing is about the list of available games — Ubisoft's library is much brighter and more attractive. As all those cheerleader girls, you, science class attender.

To be fair, it's worth noting that the fifteen-dollar bill also includes a subscription to the new Google Stadia streaming service, which provides streaming for $9,99 per month. So you can send your letters to Jay Raymond, head of Stadia Games and Entertainment.

And what does this mean? Well, if digital trading platforms start moving towards paid subscriptions independently from each other, then sooner or later we risk facing a completely new computer games and related materials distribution format. At one point, the user will be able to get either everything with a subscription or, after his wallet is empty, a dull nothing.

Is it good or bad? Do not rush to retain your favourite torrent's password and login, let's count the money.

We should leave Ubisoft alone: they still need to recover after a mediocre performance at E3 brightened with an ultrasound scan of UPlay Plus. Hereinafter we will talk about the hypothetical trading platform ESUGOS (hit the LIKE button if you have deciphered the abbreviation). 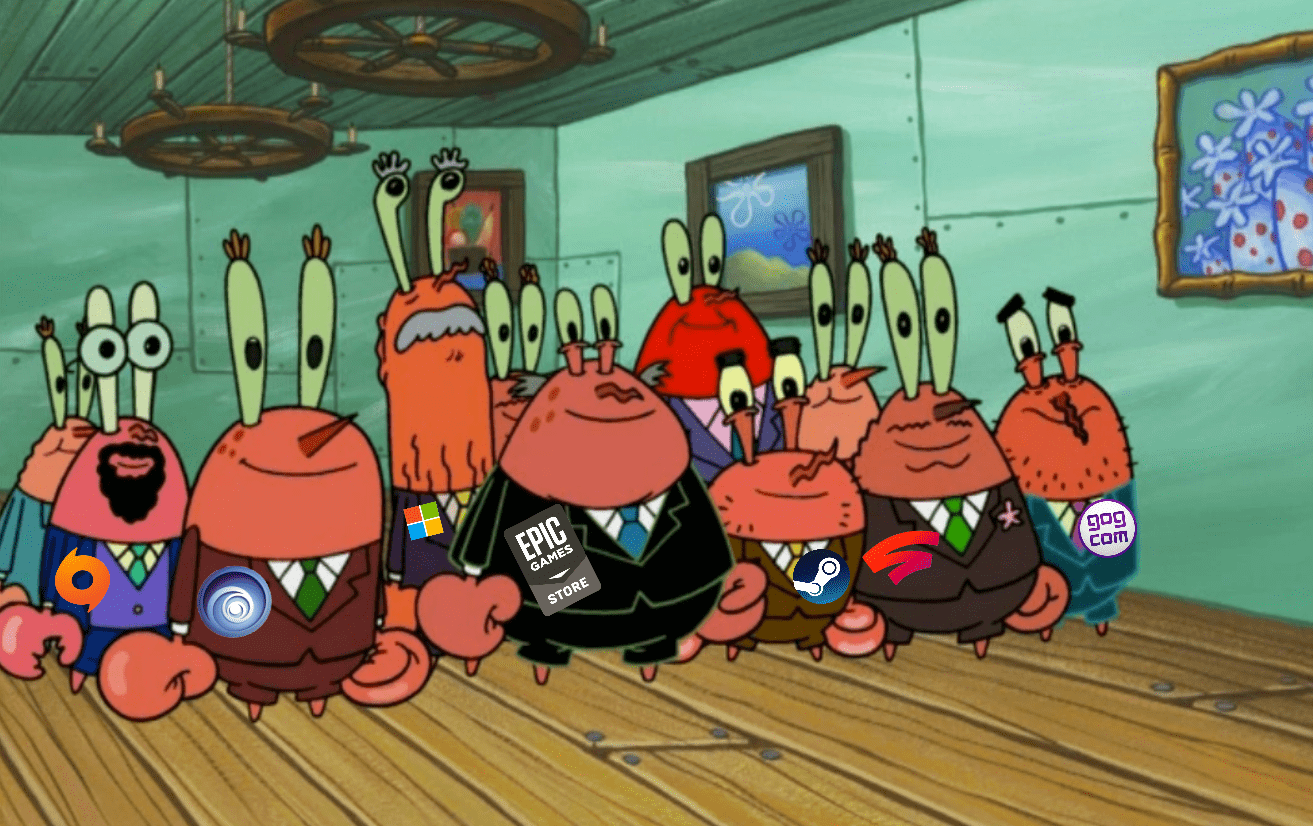 In order to properly build the market relations of our platform, we establish several indicators:

Indicator one: how much is the average person playing?

Historical note: since May 2018, Steam has been released on iOS and Android; UPlay reached users of tablets and smartphones in April 2019. For the first time in the history of mobile gaming, it led to bringing more money than their fellow PC (32.9 billion) and consoles (34.6 billion) services combined: in 2018, the total revenue of the segment is estimated at 70.3 billion dollars, NewZoo market researchers say. Keep in mind that Origin, GOG and Epic Store so far work without mobile players and have not yet contributed to the development of this market.

Besides, tablets and smartphones are more popular — according to security.mosmetod statistical service, Android and iOS users spend 16 hours a week on cutting 2D fruits and solving puzzles for children.

Entertainment Software Association, the American Association of Software and Computer Game Manufacturers, reports that gamers, on average, spend about six hours a week playing online games and a little more than four hours in singleplayer projects.

To understand the situation correctly, we will introduce three new objects corresponding to the involvement of the target audience in the game lifestyle.

Indicator two: how many hours are required to complete large projects?

To clarify, we omit esports disciplines, despite the fact that the sector has purchasable copies (PUBG, Artifact, Overwatch), the majority of competitive products are distributed free of charge (Dota 2 and League of Legends, super popular Fortnite, new Apex Legends, CCG Hearthstone and Gwent, and so on).

So, is it possible to complete the upcoming Cyberpunk in a month, if you still have not stopped wasting precious time on useless food or sleep? Or Kojimbo's magnum opus — Death Stranding? How many hours have players spent on God of War 2018, Mafia 3, Red Dead Redemption 2, GTA 5, The Witcher 3 and other hits?

Indicator three: how much do these games cost?

The prices exclude discounts and promotions.

God of War (physical copy, as PlayStation Store has only the extended version for $75): about $40;

Now from the data obtained by blood and Google, take a look at this table.

Note one: we mildly remind that the price for the entire service is $15 per month.
Note two: we prudently omit cooperation with Google' streaming service.
Note three: in some places, the numbers were rounded, as we used the average rates of "time spend to complete".

Well, the price difference immediately catches the eye. Even experienced gamers will have to pay for at least two months of subscription (let alone casual games!) to complete story campaigns. That "cheap" subscription looks attractive only to the "Nolifer" category (we remind you that you can join these ranks only if you are playing 4.6 hours per day), and even they won't be able to bring the Polish Casanova to the Tussent Korvo Bianco in one month.

It turns out that a subscription with a bill half the cost of one entertaining AAA-project, as a result, will cost player time, and the majority simply do not have Time-Turners to play all the generously provided projects.

Immediately, a malicious image of cunning publishers from ESUGOS appears in mind, and thank God, this digital store so far exists only in our article. Users are misled if not fooled, but this is still half the problem. Under certain conditions — a fireproof chair and a lot of free time — potential buyers can still benefit from the subscription. But the poor developers will be struggling. Hey, how much will they get from those unfortunate fifteen dollars? And the cultural and gaming heritage threat looms on the horizon: the developers will have to unleash buy-to-win ideas, endless DLC and other outrageous nonsense (which from time to time their real colleagues do).

How this could work?

In fact, everything would be exactly the opposite. Given the most reasonable business model, the developers would theoretically turn from an apparently oppressed section into the most secure market division and become the only guaranteed profit recipients. It would be trading platform's duty to work off with all the risks. A digital store would have to face the dire need to simply invest in any game, buying the right to distribute it for a tidy sum, and expect for the worst things not to happen.

The suggested process is well described using the example of a bank-customer-seller ligament of a consumers loan. The store does not wait for years until the buyer pays the decorated household appliance, but immediately receives the full amount (minus a small commission) from the bank, which in turn works with the borrower, profits on the transaction — or does not receive anything, and does not even refund.

The subscriber, in this case, does not participate in this entire chaos, as the above-mentioned battling of the developer and the end-user marketplace does not concern him (only the pricing can, but that's about the publisher). Consumer's fate, as before, is satisfactory. You can always look at any flagship that could run on your PC, not the longest, but for your pleasure. Or, on the contrary, stretching a virtual adventure a little longer, in the end, $15 is not so much.

As a result, we have a classic list of pros and cons to this model with mandatory membership.

Even a quick glance, approximate figures and the most simplified calculations are enough to remember the axiom of free lunches. In fact, a fifteen-dollar all-inclusive is more expensive than standard prices, and in some cases a lot more money-charging.

However, as an alternative to modern trading platforms, the subscription distribution system has all the rights to exist. Moreover, the disadvantages of our test format can be corrected with a simple solution: just add the ability to buy and play games with no active subscriptions. And then ESUGOS will become much more flexible: take a look at all the new products, or try on the missed classics, or go spend evenings on sweating for a 100% Platinum in your collector's edition.

And it looks like this is exactly what Ubisoft are going to do in September.

All in all, different formats of digital distribution as well as the rapidly growing competition of different trading platforms will have everyone benefit: both gamers-buyers and developers-vendors.

"You can't always sit in the corner and hope it will go away because that's not how this world works" Rainbow Six Siege North American League announced Steam Golden Week Sale brings huge discounts to the FGC Samurai Shodown makes its way to the Epic Game Store Dota 2 achieves over 400,000 average players once more