Streamer suspended from AGDQ due to sexual harassment charges

Streamer suspended from AGDQ due to sexual harassment charges ⚡⚡⚡ Esports and gaming news, analytics, reviews on WePlay! The latest news on WePlay!

Today is the finale of the annual Awesome Games Done Quick 2019 marathon, which we told you about just yesterday. The roar of passions "behind the scenes" of the event is really serious at this time.

Twitch streamer and Legend of Zelda: Ocarina of Time speedrunner Mari blamed another streamer Chad "cdgexe" George for sexual harassment. She reported this to the marathon’s management, where all the actions took place, and they immediately responded to this with Chad's life ban in participating in this marathon.

This is how the “suspect” tried to explain the situation. He told that he suffers from chronic insomnia and can stay awake for 90 hours if there is no one in bed with him. Usually, this role is handled by Chad's dog, but during the marathon, he understood that there would be no beloved pet and he might have trouble sleeping. Therefore, as stated by the streamer, he asked his friend Mari to spend the nights with him in the same bed. Since the girl wasn't a participant of AGDQ 2019, Chad offered to pay for her flight and stay for the duration of the event. Instead, she just had to make him a “night” (do not think bad) company.

Chad also posted screenshots of personal messages with Mari from Discord in his Twitter account, where an intimate conversation took place between the streamers. These screenshots are deleted, and Chad's Twitter is unavailable for viewing now. 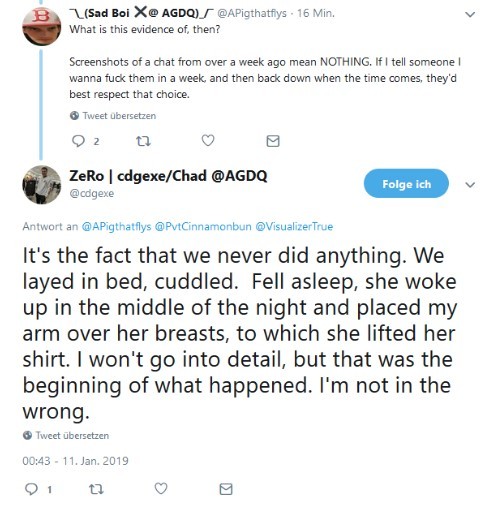 What exactly happened during the night between Mari and Chad - remains a mystery. One thing is clear that the girl has accused the now former participant of the marathon of sexual harassment.

The guy didn’t have an opportunity to justify himself, and the marathon’s management removed him from participation for good. Chad claims he didn’t do anything wrong and didn’t even have anything wrong with his thoughts. He wrote that GDQ staff do not accept visible evidence from him and don't give him the right to protect himself. 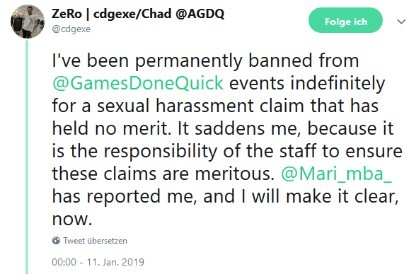 In turn, Mari on her Twitter didn’t give any comments about this situation.

If we become aware of any more details of this situation, we will notify you. For now, express your opinion in the comments: who is right in this situation - Mari or Chad? Which of them is lying?