Sean “swimstrim” Huguenard is the most popular Gwent streamer in the USA and around the world. He is famous for his “creative decks”, as swim refers to them, or “cancer decks” as viewers and opponents love to call them. Sean is extremely easy going and could laugh about everything.

Swimstrim was born July 30, 1993, his mother is Japanese. Sean started his gamer career by playing YU-GI-OH Trading Card Game, published by Konami in 1999. He has probably tried playing every decent CCG there is, and now he’s using that experience to build unconventional decks and exploit meta.

— I've been a long-time admirer of card games due to my love and penchant for deep strategy, as well as complex math. In particular, my theorycrafting and figuring out unique strategies that other people are overlooking.

Swim is one of the people who enjoy the process of deck-building as much or even more than playing the game itself.

— It's a common meme on my stream that I will spend literally several hours at a time in the Deckbuilder, doing math and theorycrafting, without playing a single game.

Besides card games, swimstrim has also played thousands of hours of Dota 2 and Overwatch. In both games, he has been very competitive, right below the ranks of professional players.

— In those games I still brought the same mentality, trying to break the meta with very unconventional strategies/lineups/builds/heroes.

Here is a video where swim talks about RNG in Artifact and shares interesting bits of information about himself.

About 2 years ago swim discovered Gwent and started streaming it. He was an instant success and his concurrent viewership was steadily about 2 000 people. Sean has been the biggest steamer of the game almost from the moment it became available in a closed beta test. 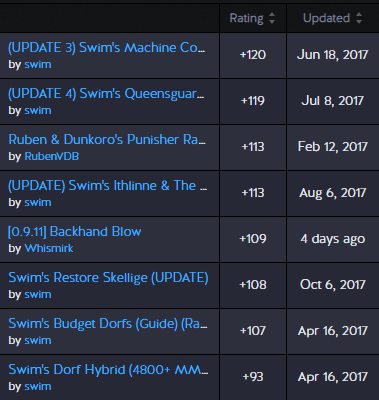 These are the top 8 rated decks of all time according to GwentDB website, and six of them were created by swimstrim.

Side note: GwentDB shut down their deck database this month due to API changes introduced with Gwent: Homecoming.

Sean maintains a YouTube channel with a ton of educational videos. Here is one of his latest submissions where swimstrim shares 14 competitive decks that exist at this moment:

These decks are very relevant since Gwent: Homecoming was released less than a week ago and many people are struggling to build a good set.

Over the last year, swimstrim has been constantly averaging over 1000 concurrent users, which recently jumped up drastically due to the launch of Gwent: Homecoming.

He has 31 patrons on Patreon, supporting the streamer with monthly donations.

Success in Gwent inspired Sean to become a highly competitive player in Artifact:

— I never tried to be a top tournament player in Gwent (although I was #1 on global ladder many times), but I'm going to push for the tournament scene for Artifact (I've won several tournaments in the beta test so far).

In December 2016 swimstrim started a company called TopDeck which operated around Gwent. The company maintained a top website about the game, that provided articles, guides and other types of content. Many top streamers and players were involved in working on the project.

The website isn’t working today, but it had a major influence on Gwent scene and brought together many pillars of the game’s community.

— I think my dick signature is pretty funny… it shows off my personality pretty well. 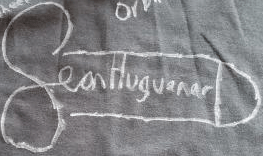 Swim once fooled the lots of players by creating a deck and inserting a joke card in it. Here he is laughing at the incident.

Where you can find swimstrim

Sean’s Twitch page usually shows the countdown timer of his next stream.