The hysteric around games that prefer a more reliable (for the publishers) Epic Store continues. So, recently it became known that Borderlands 3 will become a temporary exclusive for Epic Store. This news caused an uproar and unleashed another drama around the future release.

Fans wanted to get revenge on the developers and publishers of games, and they have come up with a very sophisticated way. The players just bomb negative reviews on past games in the series. Thus, the recent Metro: Exodus has already suffered. Players disliked in their reviews Metro 2033 and Metro: Last Light, drowned good games in the negative and obscene comments.

Valve had to take emergency measures. In March the company announced that a new system that can save games from being bombarded with dislikes was being prepared. Algorithms automatically detect suspicious activity in reviews and then notify Steam staff. If suspicions are confirmed, then a particular notification is posted on the game page, and the recent rating is no longer taken into account. 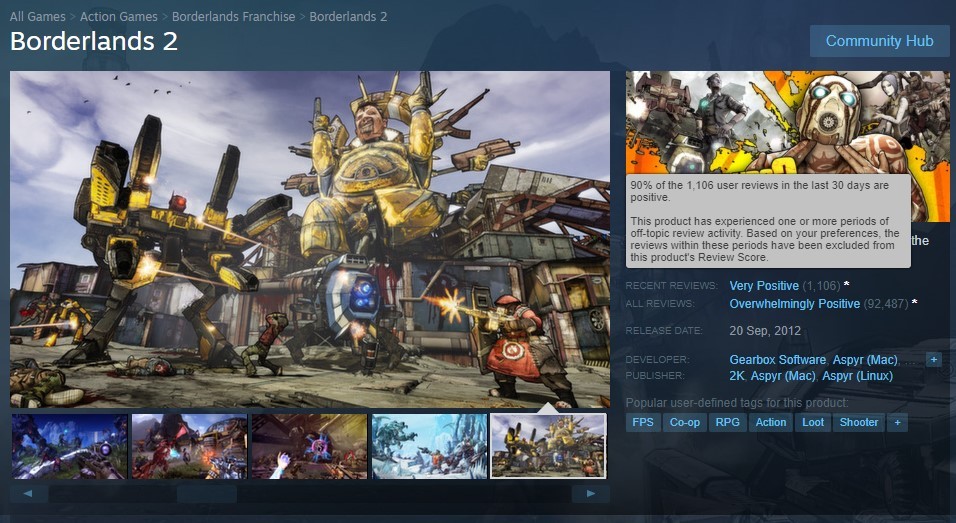 Borderlands 2 has accumulated more than 4,000 comments at the moment that don’t participate in the game rating. This means that the inscription "Overwhelmingly Positive" will remain near the product name in the reviews section.

A little earlier, Randy Pitchford is in extremely ironic (but he was wrong) way spoke about Valve. In his opinion, Steam would never have to fight with a similarly negative review system, because it is beneficial to them that the publishers didn’t leave the platform. In fact, Valve took care of their customers, even though some of them continue to leave the platform.

If you still want to plunge into the abyss of user anger, you can always turn off the off-topic protection, and then controversial comments will affect the overall assessment again.