The penultimate day of StarLadder ImbaTV Dota 2 Minor is over, and we already know the name of the fifteenth participant at EPICENTER Major. But first things first.

The playoffs were held in the Double Elimination system, and today we had four matches. A stubborn struggle immediately awaited us in the first one. Alliance and Team Sirius are, perhaps, the two most motivated teams of this playoff stage, so their match set a high pace throughout the game day.

We predicted that Sirius would win in this match, not allowing the Swedes to go to the late stage of the game. However, three games lasted 44 minutes, and Alliance was stronger - 2:1.

There was no intrigue in the second semi-final. Ninjas in Pyjamas was stronger than Team Anvorgesa in all respects. Slowly, calmly, but inexorably, the ticks of NiP players squeezed the South America representatives more and more. We want to highlight the Ace game: he died only once on each of the maps and was extremely useful.

The battle of European titans for the first ticket to Major turned out to be the most spectacular fight of the day. Alliance failed the first map and started lagging behind the opponent in the second, but they managed to change the course of the game.

The entire progress of the Swedish team for this season became especially noticeable on this Minor. The players showed themselves worthily, though not without some mistakes, and "gnawed" a slot at EPICENTER Major.

The guys from NiP got a second chance, and they could probably stay and watch the elimination game between Team Sirius and Team Anvorgesa. Unfortunately, the Chinese team didn't make big mistakes for which they could be "punished". Representatives of South America have already spent their supply of luck and courage, so, they hopelessly rested against the Chinese wall. 0:2 - and the favorites of the public with a cat-burger on the logo left StarLadder ImbaTV Dota 2 Minor. 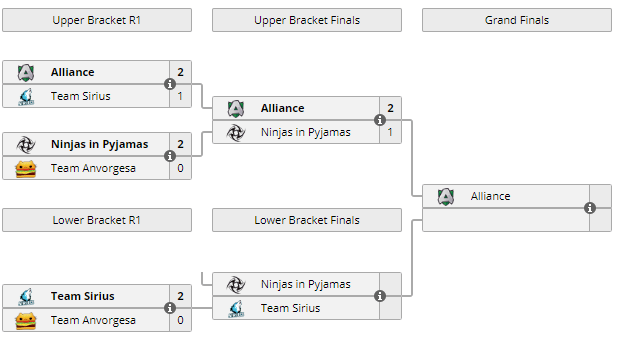 Tomorrow will be the culmination of the current season final Minor. Team Sirius and NiP will play for the second ticket to Moscow, after which we will watch a Grand Final battle. The champion will get $125.000.