Sekiro: Shadows Die Twice - where to find every prosthetic attachment?

Sekiro: Shadows Die Twice - where to find every prosthetic attachment? ⚡⚡⚡ Esports and gaming news, analytics, reviews on WePlay! The latest news on WePlay!

The prosthesis on Wolf’s hand in Sekiro: Shadows Die Twice is one of the main innovations of developers in their souls-like series. A severe Sculptor sitting in the Desolate Temple can help an Okami to modernise his prosthetic arm and add several other options to the hook. The first thing to get is the Mechanical Barrel, which will be obtained after you beat the first mini-boss at the gates of Ashina Castle - Gyoubu. After the main character finds the primary tool (Shuriken Wheel), you can go to Sculptor and install the first auxiliary device.

You can improve the tool with the specific resources - Sen, gunpowder and metal. The emblems of the spirit, falling out of dead enemies, are being spent on ammunition. 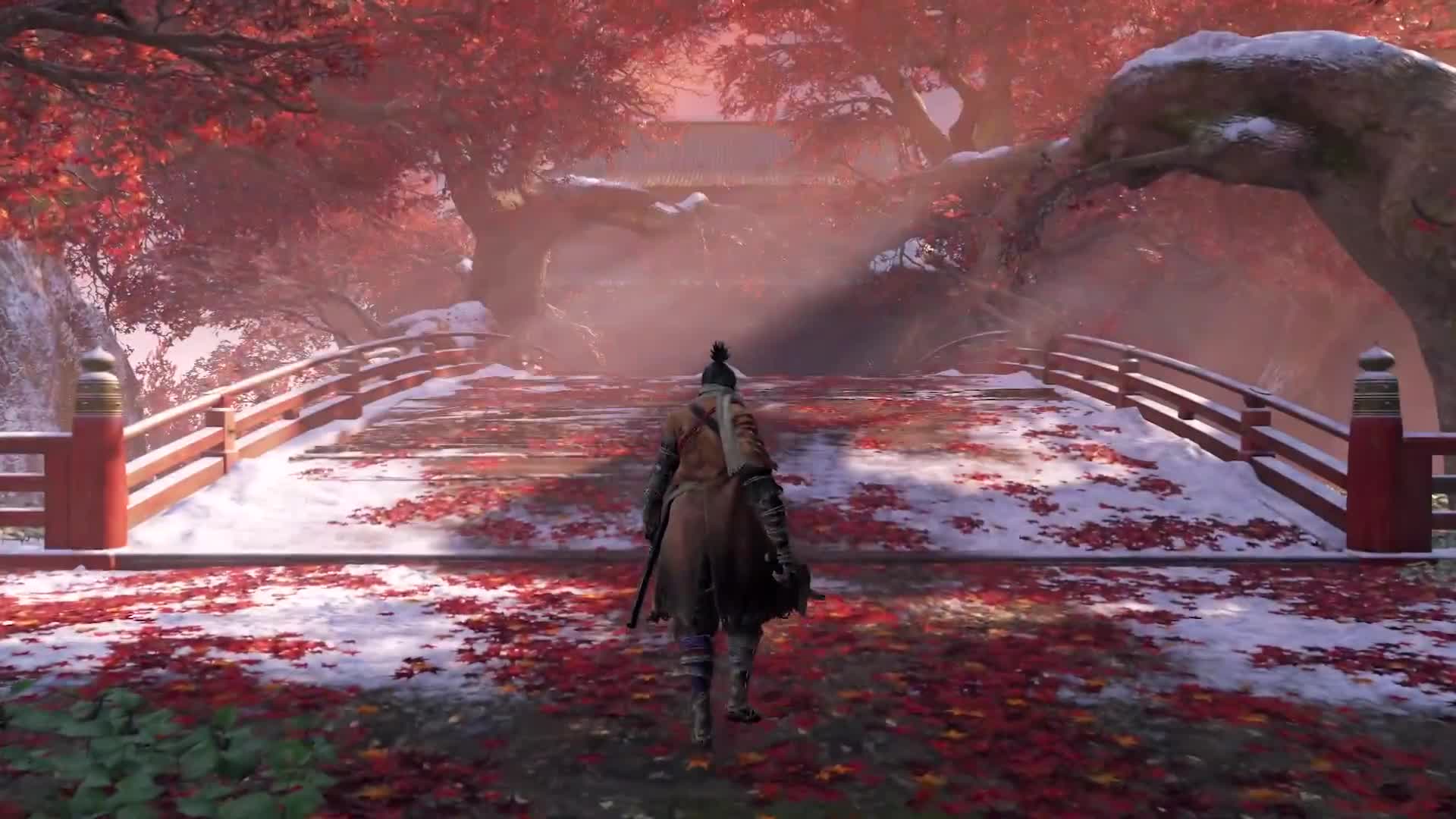 Where to find tools for the prosthetic arm in Sekiro: Shadows Die Twice?

Let's start with the Ashina Outskirts and the built-in shuriken. It lies on the outskirts of the citadel, in a room above the large entrance gate. The easiest way to focus on the fast travel point called Outskirts Wall - Gate Path Sculptor's Idol. We jump into the hole from above with the help of a hook, and we turn to the left - the desired object lies in the corner.

You have to fight with General Naomori Kawarada for getting Shinobi Firecracker. As soon as you kill him, jump over the gate and look for a high mountain - on the left you can climb right to the top and find the Battlefield Memorial Mob merchant. He will sell you Robert’s Firecracker for 500 Sen. And these are all tools (at the moment) that you can get in Ashina Castle - you can go to the Hirata Estate. Moving back in time with the help of the Sculptor's Idol in Desolate Temple allows Wolf to gain memories and acquire, at the same time, a couple of useful tools. Young Lord's Bell Charm will enable you to get there.

When you find the first Hirata Estate Sculptor's Idol, jump to the right walls, until you see a vast territory with an archer on the roof and many NPCs guarding the fire. The modification is ... drum roll, in a fire and it’s quite tricky to find. First, you have to kill all the guards, and then calmly pull the fire barrel out of the fire and go to Sculptor. 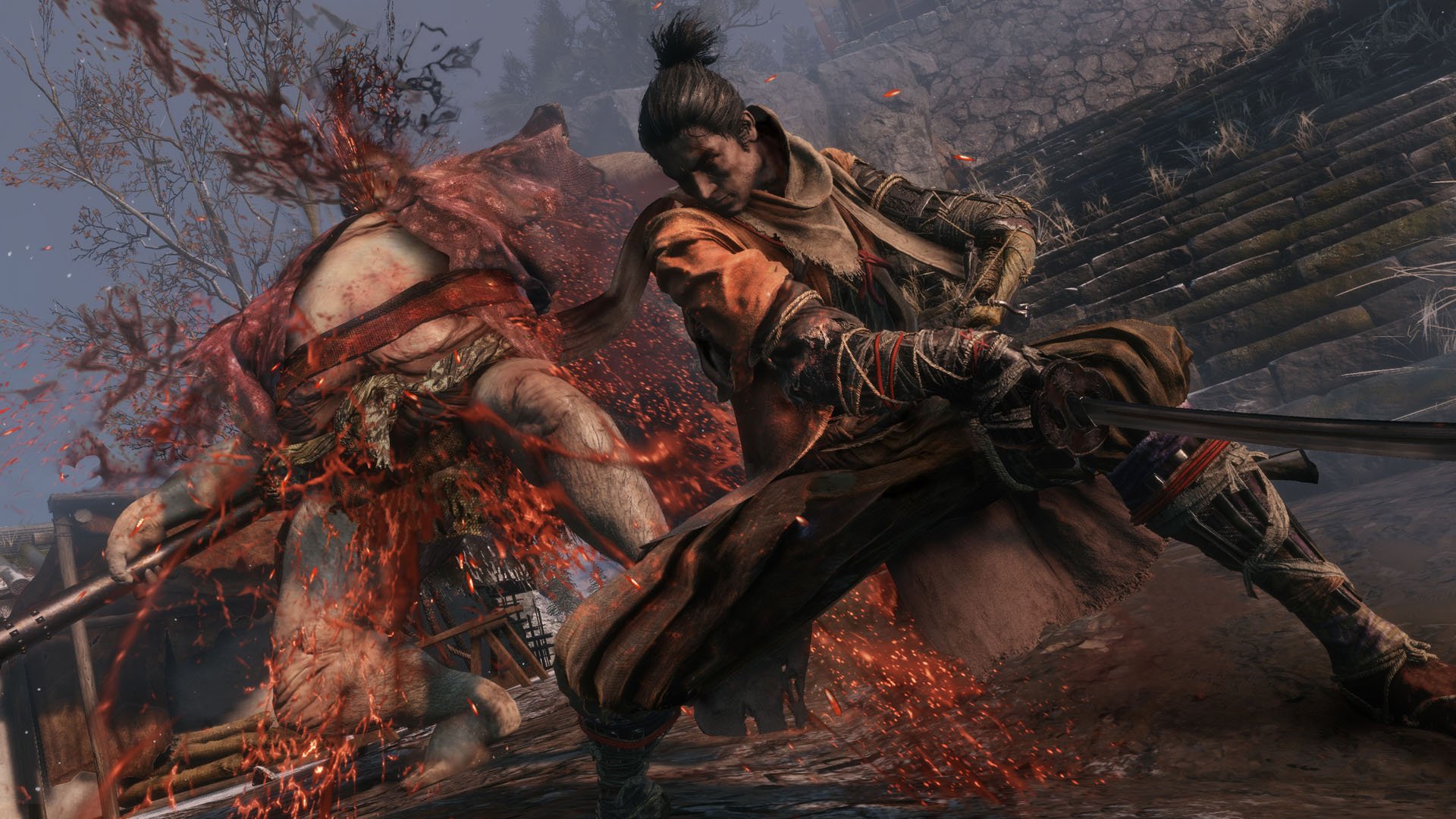 And again we are back to the fire, where we found Flame Vent and go along the path upwards until we meet the wounded samurai, who lies by the wall to the right. He will tell you about the mysterious axe of the shinobi warriors and then pass away. We turn left, looking for another yard with two guards in the garden. We kill them and open the garden house, which they so carefully guarded. Shinobi Axe of the Monkey will be inside, and you should bring it to Sculptor for it to be upgraded into the Loaded Axe.

This is more complicated. First, you have to kill Shinobi Hunter Enshin of Misen, who dreams of delivering the Wolf's head to his masters. We are looking for an idol called Bamboo Thicket Slope on the side of a hill, save the game and move on, up the stairs. Then you have to look for a capture point near the tree on the left, jump over to the other side and go to the bridge. There will be another point to the right, which you can reach with a hook and move to a cliff, at the end of which a mysterious golden object lies. On the right is a bamboo door, which you have to break with a sword and go inside to get into the cave. Next, rise to the very top, jumping from wall to wall and go left to the temple of the ninja, behind the doors of which Mist Raven's Feathers lie. After that, you can safely return to the Ashina Castle. 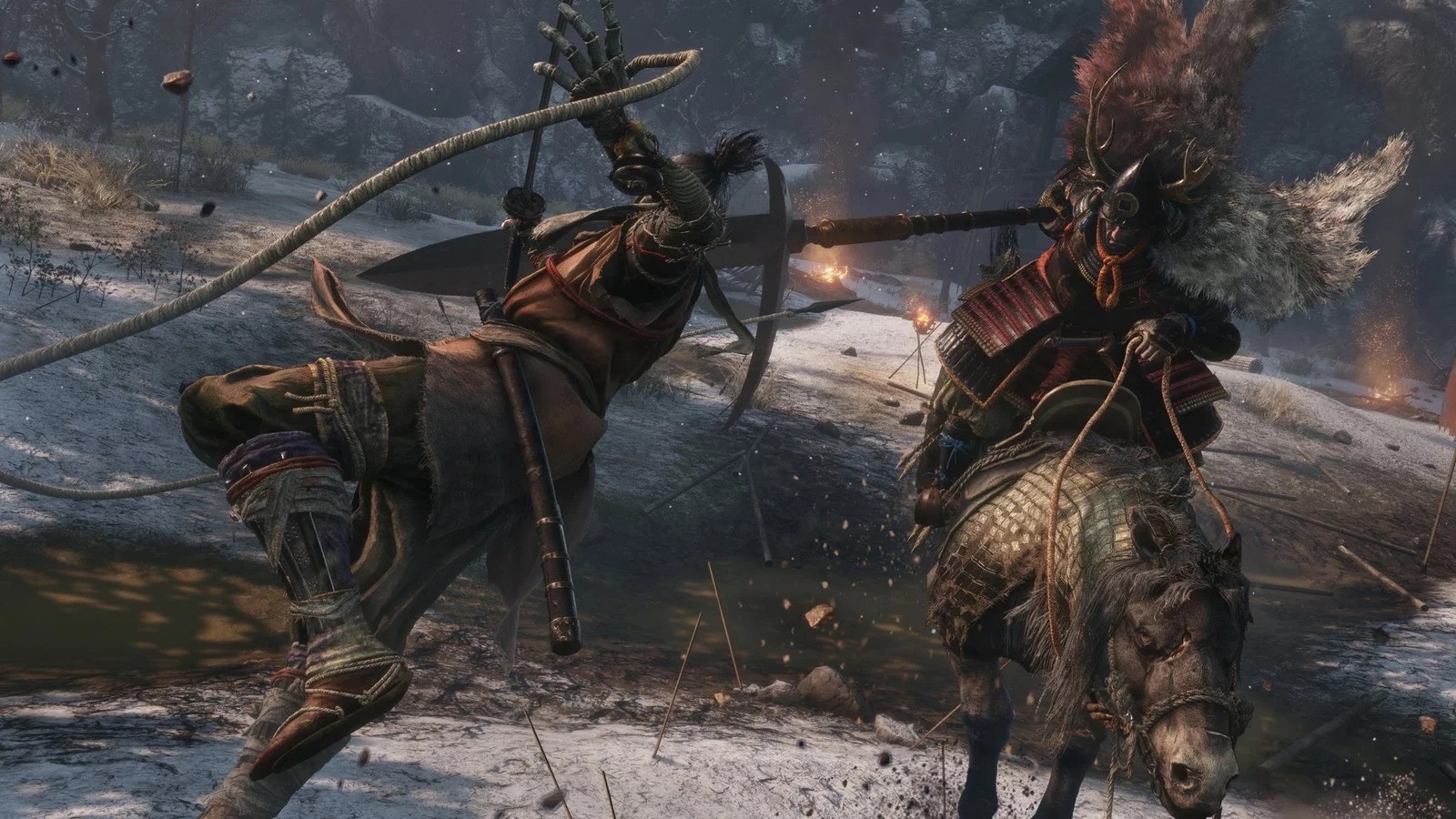 Moving to the first idol of this area. We'll have to jump from the bridge to the opposite ledge, grabbing the branch. You will kill two guards on the bridge, take away the Gatehouse Key from them. Now it is necessary to find Ashina Reservoir and overcome the gate with numerous guards in the form of shooters and burly bugs with hammers. They patrol the area, be careful. There is a house on the left side of the gate - we open it with the key we’ve got, and we are looking for a chest with the Gyoubu's Broken Horn, from which Sculptor will make a spear.

Return to Ashina Castle Idol and look for Incense Smoke signals on the roofs on the right side, jumping on them. You need to get to the special tower, where the next point of fast travel “Upper Tower - Rooms” is located. Jump down, kill the four guards, and in the chest, you’ll find ancient, powerful Sabimaru blade.

Look for Old Grave Idol, from where you have to jump to the left side and find a building with a broken roof. It hides a merchant Blackhat Badger, from whom you can buy a special tool called Iron Fortress for 1600 Sen. It’s expensive, but what can you do. And Sculptor works for free!

The next prosthesis can be found not far from the third idol in the Sunken Valley. To begin with, you will have to endure the real test of Long-arm Centipede Giraffe boss. After defeating another monster, you have to look for a statue, near which the Large Fan lies.

One of the few tools that can be given as a reward for defeating the boss. Having gained the upper hand over Guardian Ape, you will get a Slender Finger, take it to Sculptor, and he’ll make you a Whistle.

For more comfortable game and easy walkthrough check out other guides from WePlay!: