With precious days left before the release of Byleth, Joseph "Seagull Joe" Raucher has dropped his updated tier list for Super Smash Bros. Ultimate version 6.1.1 His list uses the regular A-F ranking system with Echos getting their very own tier right at the bottom.

His Wii U buddy Sonic is positioned in B-tier alongside Olimar, Ridley, Mr. Game & Watch, Terry Bogard, Dark Samus, Bowser, Hero, Diddy Kong, and Ken. The many heavies are considered a bit bad in his list, with King Dedede sitting in E-tier along with Doctor Mario and Kirby, while Ganondorf and King K. Rool are joined by Isabelle in F-Tier. 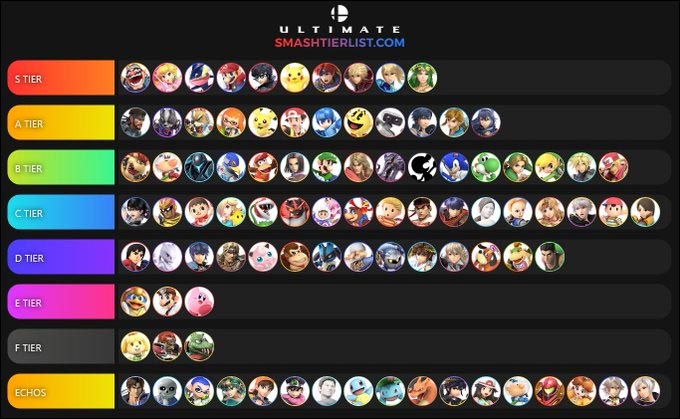 Surprisingly, Seagull Joe has Little Mac in D-Tier, but the biggest surprise of all are the Echos at the bottom. Even though they aren’t unique, one might have assumed that they’re just as good as their Smash replicas. There’s also the three Pokemons Squirtle, Charizard, and Bulbasaur down here, together with Samus instead of Dark Samus.

Seagull Joe’s last Super Smash Bros. Ultimate tier list was for version 4.0. It will be interesting to see whether version 7.0 will bring enough changes to warrant him dropping a new tier list after Byleth joins the roster.