Metal Gear Solid series will have its own board game next year.

Metal Gear Solid series will have its own board game next year. ⚡⚡⚡ Esports and gaming news, analytics, reviews on WePlay! The latest news on WePlay!

The board games have always been on top. The video games, of course, are always a good experience and an attractive picture, but nothing can replace the passions that flare up during long hours of playing board games with friends.

The games fans don’t mind to invest their savings in buying board games based on their favourite video games, like fans of Assassin’s Creed game, who simply attacked Kickstarter with their donations recently.

IDW Games and Konami Digital Entertainment announced that they would create their own board game for the Metal Gear Solid series in 2019.

The game will be named Metal Gear Solid: The Board Game, that’s to be expected. The specific release date hasn’t been set yet. The game fans will have the opportunity to play four key characters: Solid Snake, Meryl Silverburgh, Dr. Hal “Otacon” Emmerich, and Gray Fox the Cyborg Ninja.

On the official website of the publisher, there is an image of how the box of the future game will look like. A bit vintage, in our opinion. 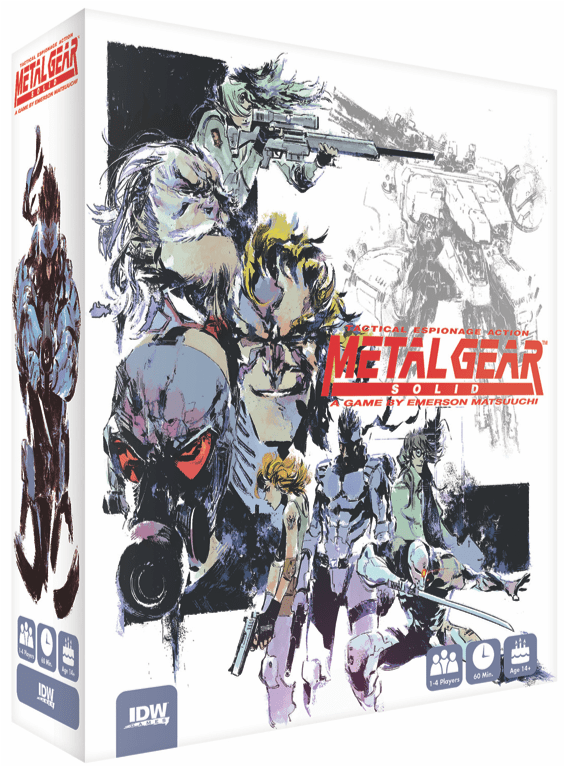 The designer of the future board game, Emerson Matsuuchi (designer of the Century game series, Reef, and Specter Ops), was inspired by the story of the first Metal Gear Solid video game. He also admitted that he is arguably the biggest fan of the game:

"Ever since playing the first Metal Gear Solid, it has forever altered the way I view games. The story it told was so memorable and the gameplay experience so rich that it has shaped my expectation of games as both a designer and gamer. So the opportunity to bring this masterpiece to the table has been an honor and dream come true. I’m excited to be able to capture the tactical stealth action that is the hallmark of the franchise as well as create a new experience and story for the Snake fans. Age hasn’t slowed him down one bit."

While the contents of the box are also unknown, there are already hints on the key moments of the board game. The main feature will be, as in the series of games, of course, stealth action. We will need to use characters’ unique skill sets to avoid detection as they complete objectives across multiple campaign scenarios. The most attractive, in our opinion, will be the variability and replayability of the game. Missions can be completed in multiple ways and will always play out differently, featuring a highly dynamic A.I. system and sandbox gameplay. It will definitely bring the diversity of many playing hours with friends or family.

“We know this a beloved franchise with a die-hard fan base, and as such we’re putting all of our energy into producing a premium gaming experience that is exciting to play over and over again.” Jerry Bennington, IDW Publishing’s VP of New Product Development.

EVO 2019 used David Hayter's voice without permission in a joke Metal Gear Solid fan made a remake in Dreams on PS4 Gaming industry faces: Hideo Kojima The original Metal Gear is being recreated in first-person