Esports differs from the original sports: absolutely any person, regardless of gender, can dive into the profession. Moreover, there are even multi-gender rosters, and they are succeeding. This once again proves the noble potential of the sphere, personifying the modern world and the people living in it.

Nastya is a professional CS:GO player currently tied to Beşiktaş Esports team, she participated in Dreamhack Rotterdam 2019 previously winning DreamHack Showdown. Recently, the international roster had expanded:  another Russian girl Alexandra Timonina was accepted into the team. The girls are now ready to immerse themselves in training ahead of the upcoming December ZOWIE LAN-tournament in China.

Nastya, it was somewhat difficult to reach out to you for the interview because of your schedule.

Yeah, we have praccs from 17 to 22-23, then I play FACEIT with my friends throughout the night. I go to bed at seven am, get up at four pm.

FACEIT friends are boys or girls?

Is it because there are few girls at your level or is that just a coincidence?

It's just happened this way. Everyone has their stacks, and so do we. There are seven or eight of us, every day we play in turn.

What about the training sessions with your team? Do you practice shooting or throwing grenades?

Shooting, grenades and everything else, as for our own skill, each of us train solo. Praccs, of course, are played against real teams. In addition to them, we can review our matches, talk about mistakes, rounds, and so on.

Has the attitude of male teams towards your praccs changed after the DreamHack?

We don't practise with top-tier teams, like those at DH for example. Our maximum is T3-T4, but they don’t really care about us, so nothing has changed.

Why not try with T2 teams?

We search for opponents through the pracc.com website. There are different groups; they all require invites. And nobody invites us to the top groups. 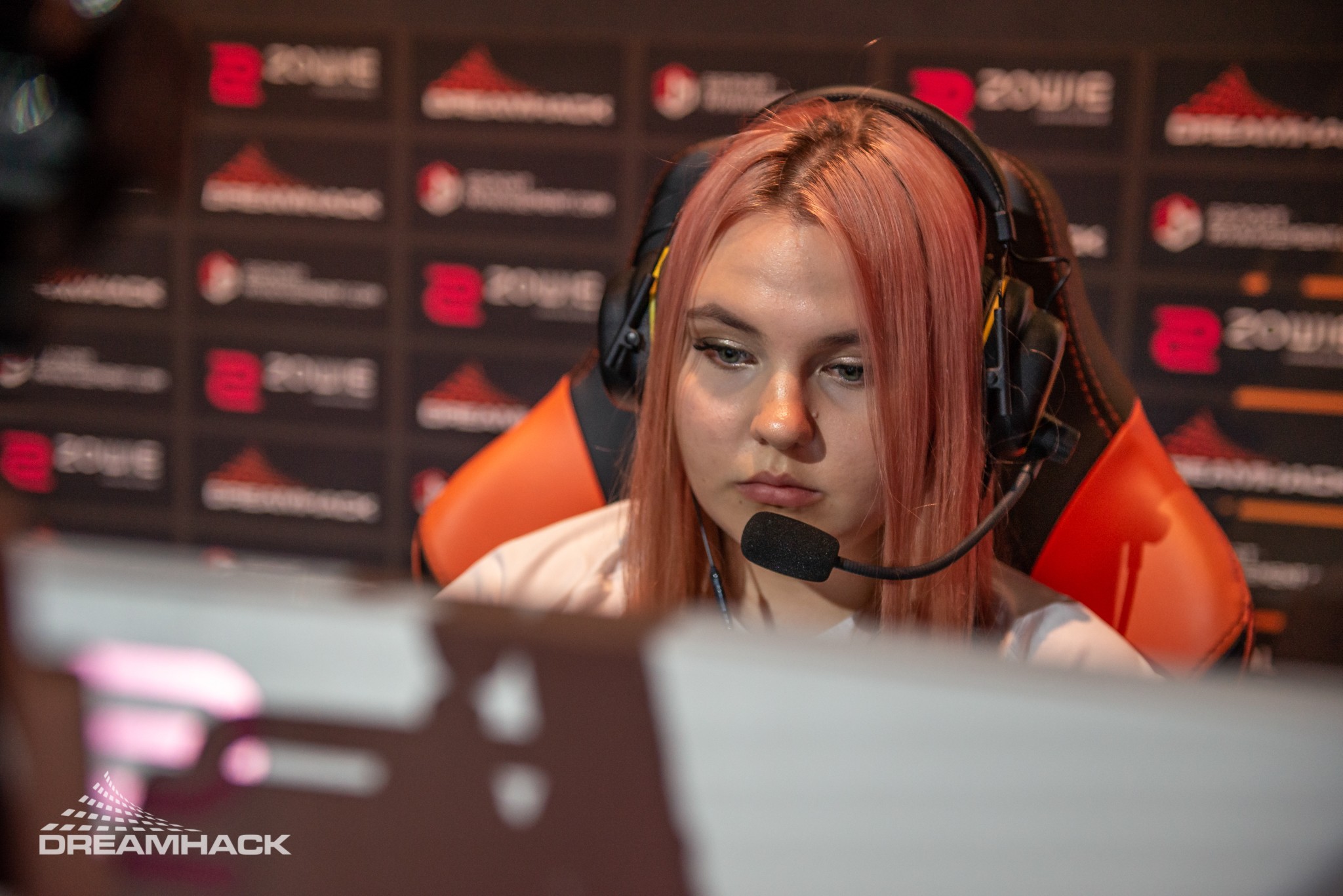 Are you friends with your teammates? Or those are purely professional relationships?

We have excellent relationships! If we are at a bootcamp or tournament, we are always together. We like to play and communicate with each other. It seems to me that few teams have such relationships within as we do.

Did you do any teambuilding? At the bootcamp perhaps.

No, we didn’t need it. Somehow, we immediately had great relationships. Because of our characters, apparently.

You speak English with girls. Is everything alright with that?

We all speak English, and there are no misunderstandings. Moreover, you don't need that much knowledge to communicate in real life and CS. And the discipline is exceptional: both at the praccs and in real life, everyone is equally responsible at the right time. And we can hang out whenever there is an opportunity.

What about hanging out?

There are a lot of internet heroes. They exist only online, but in real life, they come and ask to take a picture.

We speak as much as necessary. There used to be troubles with giving info — too much spam — but now it’s much better. And there are no nervous situations: we are not the team that tilts after five lost rounds.

But this is a matter of teamwork, right?

In fact, it quite greatly depends on individual skills. It is important that a person understands when and what info to give.

Do you troll each other somehow?

Everyday! Everybody giggles, everybody rolls on the floor, laughing. There are no refugees. We mostly joke about CS, we don’t get into closed topics like politics. Well, my teammates know a couple of fascinating phrases in Russian! [laughs]

Have you been taught similars in their languages?

Sure! Both in Swedish and in Dutch!

Do you have a psychologist, a fitness trainer, etc. in your team?

Nooooo! The only useful thing is a massage therapist. The rest, in my opinion, are not necessary. If people are uncomfortable with each other, they do not need a psychologist; they need a new team.

I meant motivation (Astralis) or wars (OG in Dota 2).

I can't really tell about motivation. If the team is doing well, you like to do what you do, you train, you win, gain experience and all that — the motivation should not fade. Still, everyone has bad moments and periods.

That is, the most important thing is staying positive?

Well, probably for everyone in different ways. But this is not only "staying positive". We're speaking about a complex of everything. For example, good mood in the team, teammates' support, the team's progress, and well, yes, a positive attitude. Because, again, we as a team communicate very openly with each other, so if someone has any problems, we always share them. And we help each other.

Yes, all of them. 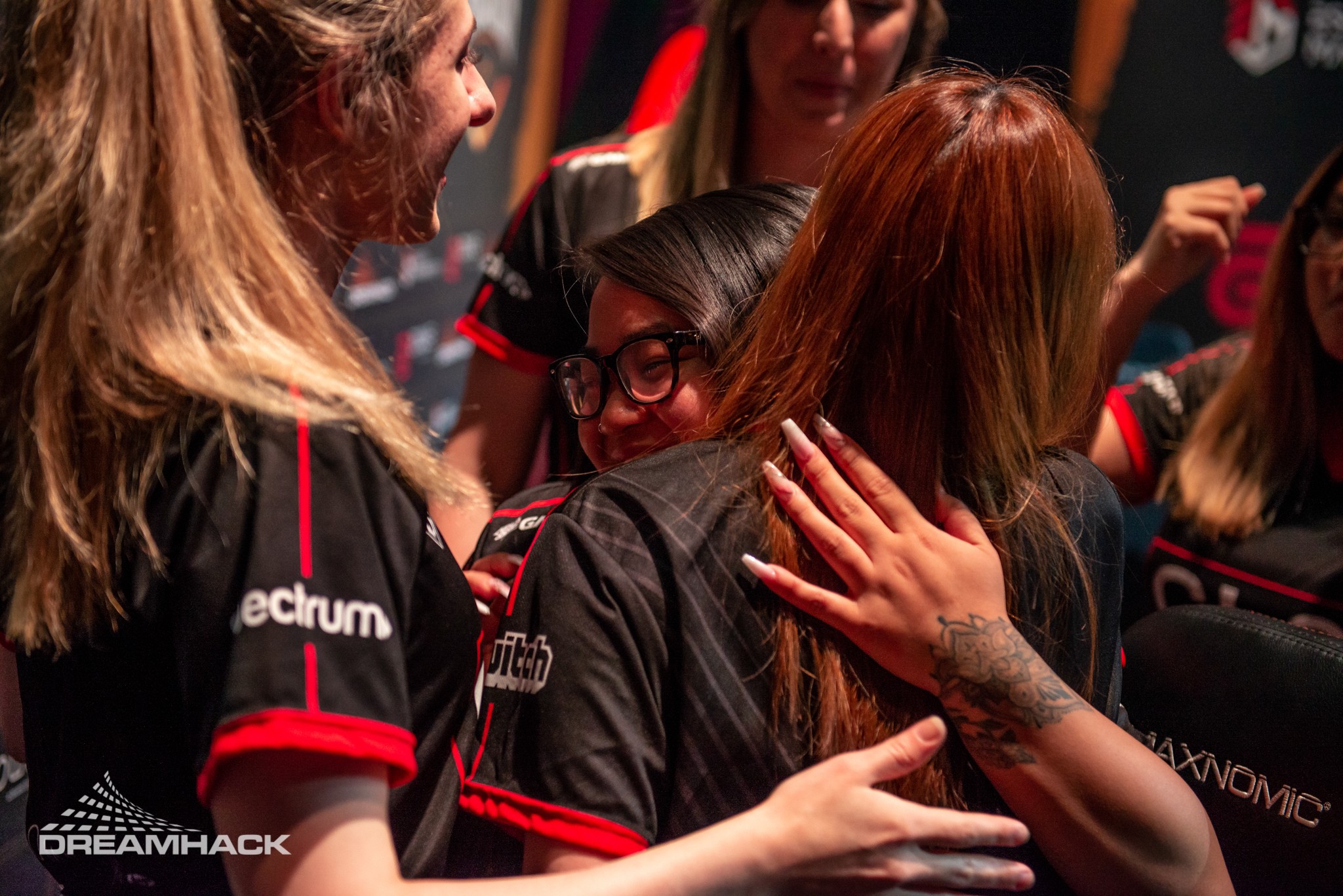 Playing with a manicure is a matter of habit. Source: DreamHack

What "female things" do you have to sacrifice for the sake of CS? Manicure maybe?

Nothing! Have you seen the nails our USA sisters play with? This is a matter of habit.

OK, but are there any superstitions? The boys don't shave, not only because of the laziness but also, they say, it's better not to before important matches.

No, there are none. And even if there were, I do not believe in such stuff.

Do you think that someday the gender difference will be erased in esports or women's teams will remain exotic?

This is very difficult, because, firstly, very few girls play CS after all. Secondly, all these pseudostreamer girls and pseudo-pro girls put the normal sisters in an awkward position. [smiles] That's why fem-CS has such an attitude. But in future, it seems to me that mixed teams may exist. Because I know girls who can shoot very well and I think you just have to polish the team play. True, in mixed teams there could be some relationship problems. 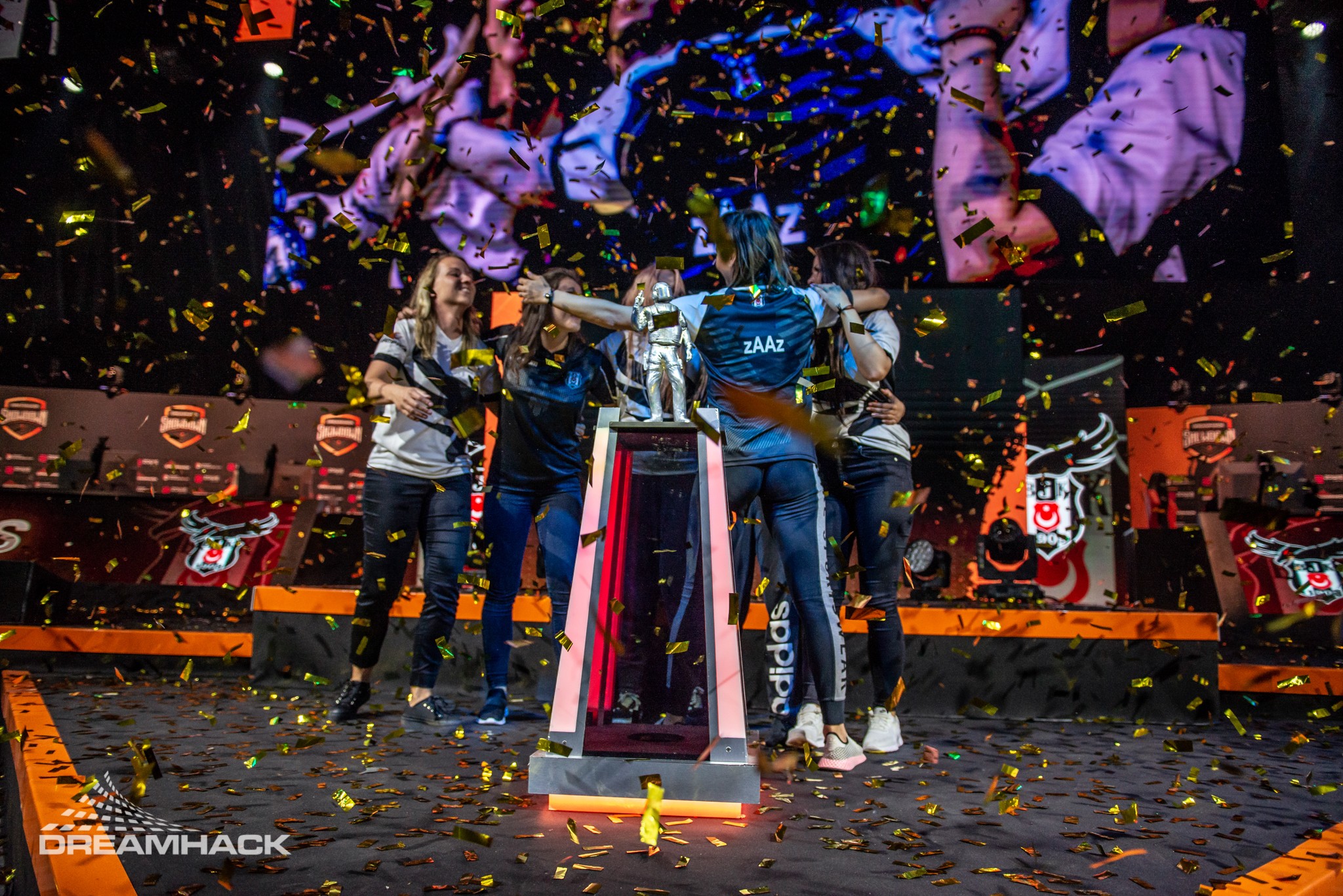 Has the interest from the male population in you, as a girl, increased due to the fact that you play CS?

Well, CS always had enough fools who pester just because you're a girl. Thank God I don’t play with such people, and I don’t have any contact with them. But my friends treat me the same way as the other guys in the stack.

There are a lot of internet heroes. They exist only online, but in real life, they come and ask to take a picture. I have never heard anything bad about me in real life, only good things.

What about the fans?

There are enough. Mostly boys. But there are girls who write to me or say that they take looks at us as an example.

By the way, as long as Besiktas is a Turkish club, are there a lot of the Turkish fans?

There are a lot.

Please tell me, do you think it is necessary to try to develop your self-brand while playing CS? You have your own page, but it's more of a blog, right? And since there are pseudostreamer-girls on Twitch, do they need to resist that with an adequate approach?

There are tons of those streamer-girls! [laughs] It’s necessary, but I'm too lazy to do this. Maybe later. [laughs] In general, seriously, your brand is very important. Organisations love developed media.

You said that your English allows you to communicate with partners in and out of CS. have you learned that at school? Or thanks to games, as many people are now doing?

I've changed five schools, and none of them had normal English teachers. It’s unreal to learn it at school. I studied with a tutor, then with an American woman. But there were not lessons but work in groups of three to four people. We just sat together and talked, discussed some topics, watched movies and all that. Well, plus, I visit my brother in the USA for the fourth year, so I had a lot of speaking practise even before I got into the team.

You write your blog using transliteration: Russian words in English letters... Is that a fetish?

It's more comfortable! I have everything in English: Windows, browser, CS console commands are in English; I communicate with teammates using it. What's the meaning of switching languages? I've been writing this way for three years now. Everyone is used to it, even my parents!

It is not surprising that the Dead Inside meme appeared in esports!

Tell us about the vocabulary of an esports girl. Do you use “guys” or “dudes” with teammates, or do it's “girls”, and “sisters”?

In 90% we use the "guys", the rest as necessary. And then, just for the laughs. Well, we use a lot of different words to call each other with my FACEIT friends! [laughs]

Have you ever thought about switching disciplines? For example, to R6S?

I don’t play anything except CS:GO. Maybe, I can have fun in PUBG with my friends. The rest is not of interest. And CS is there forever. Now they are releasing a lot of games for a younger audience with all the non-stop updates, new heroes, where everything is bright, etc. CS is not like that.

My brother is thirteen years older than me. I always talked to people much older than my age. Plus, I started playing CS at the age of thirteen or fourteen; there were also some “adults” there. Maybe it somehow influenced. And my teammates are all over twenty-five! [laughs] 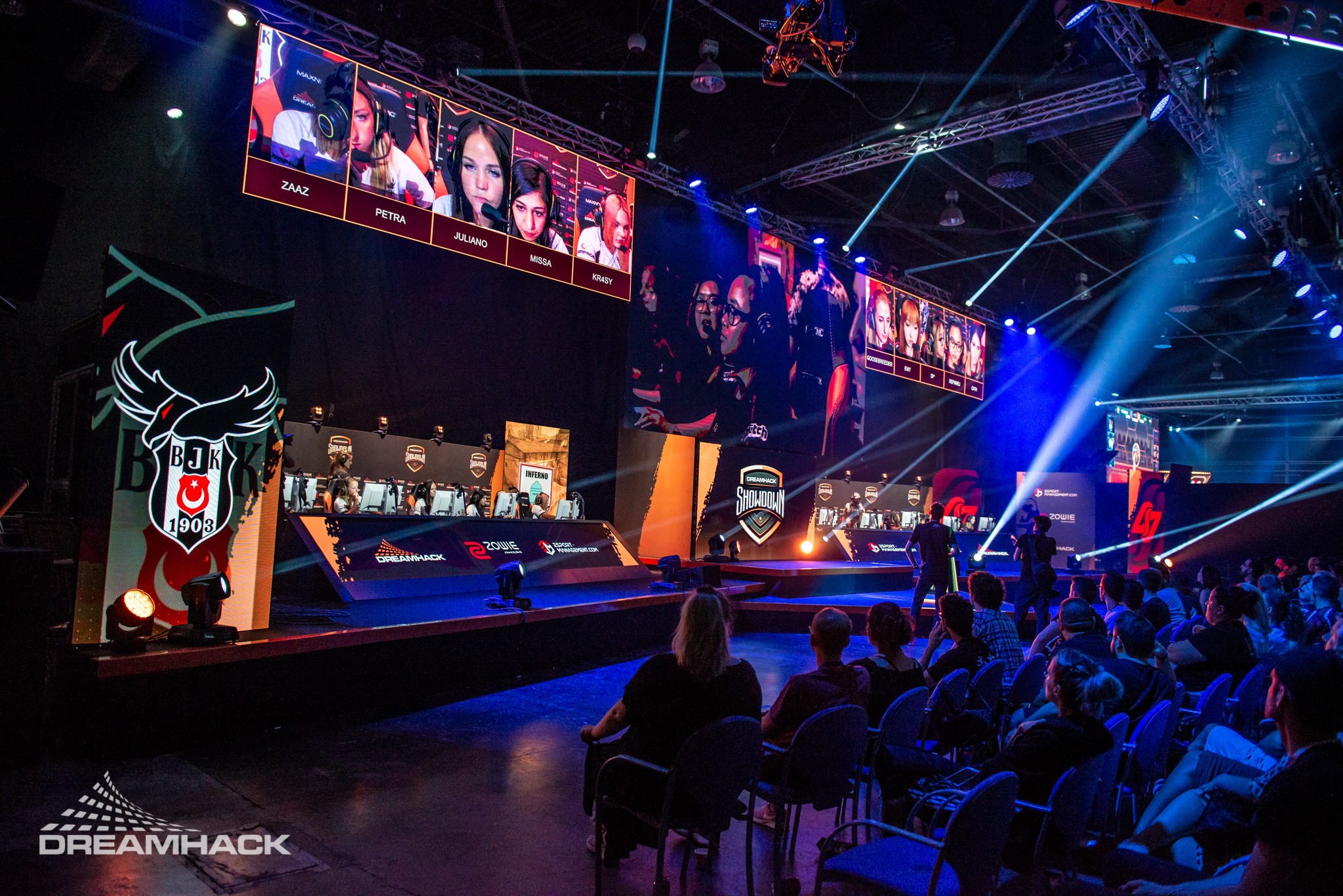 A lot of things, I just don't have enough time for everything. I play the guitar, draw, I love art in general. I want to start learning Japanese, but I can't find any good teachers. It’s difficult in Russia, you know.

Do you have a favourite team that you would like to play for?

I love AVANGAR for their hard work and zeal. I liked "liquids" even before they became mainstream. But anyway, I love beautiful and exciting CS. There's this period in the game right now, and it seems to me that the players are changing, the old are leaving, the young are arriving, there are reshuffles. It is necessary to endure this moment.

Everyone thinks that being a pro-player is super fun, but in fact, it's vice versa. Of course it’s great that you don’t need to go to a "normal" job, but on the other hand, you spend all day at the PC, waste all your time on games, and frequent trips quickly start to bore you. It is not surprising that the Dead Inside meme appeared in esports [laughs]